Commander-in-Chief of the Ukrainian Navy: "Ukrainian submarine forces should become the elite of the Navy"

January 27 2016
228
One hundred pounds of patriotism was presented to Ukraine by the commander in chief of its naval fleet (as if there is one ...) Vice Admiral Sergey Gaiduk. According to the vice admiral, who publishes the portal defence-ua.com, Ukraine intends to create its own submarine forces. From the statement of the Ukrainian Vice-Admiral:

Submarine forces should become the elite of the fleet and an important combat, moral, psychological and deterrent factor in the region. A new infrastructure will be created for the underwater forces. 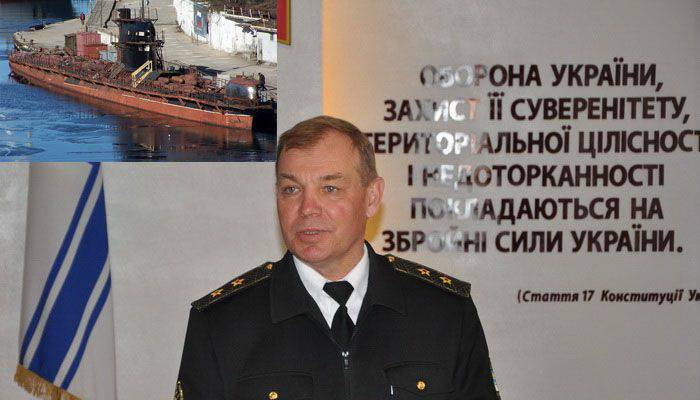 For information about the text in the photo: Non-faint (in Ukrainian) - inviolability

According to Haiduk, now the department is in the process of considering options for equipping future Ukrainian submarine forces, taking into account the hydrological features of the marine area of ​​application. The vice admiral said that it was not only ultra-small and small, but also medium-sized submarines.

At the same time, Mr. Haiduk did not clarify when exactly Ukraine will have its own submarine fleet, how much manpower and resources it will need, and whether there is a place in it for the “flagship” - “pidvodny chovna“ Zaporizhzhya ”, which is still on the Russian base in the Sevastopol?

In connection with the statement of Haiduk, the well-known expression about the “submarine in the steppes of Ukraine” acquires a new (relevant) semantic connotation ...
Ctrl Enter
Noticed oshЫbku Highlight text and press. Ctrl + Enter
We are
One less admiral? .. Poroshenko dismissed the commander of the naval forces of Ukraine Sergey HaidukRussia demonstrated the most promising weapons at INDO Defense-2014
228 comments
Information
Dear reader, to leave comments on the publication, you must to register.