January 28 2016
470
The other day, Russian President Vladimir Putin gave a reason, as they say, to hypocrite. We are talking about his words, in which a certain kind of criticism was addressed to Vladimir Ulyanov (Lenin), or rather to the idea of ​​a state structure, Lenin proposed in his time. According to Putin, Lenin, still at the stage of the formation of the USSR, laid a “atomic bomb” under Russia. As soon as such a presidential statement became a kind of public domain, all sorts of political and political circles started up in an attempt to make a comment on this issue.


It was noteworthy that both frank liberals and representatives of communist ideas were shook up. Some, with notes of curiosity and active rubbing of hands, declared, they say, how it is - a former employee of the USSR KGB suddenly decided to criticize Lenin's ideas ... Others were offended by Vladimir Putin’s presidential statement, having decided that the current president would be liberal (and any) of Russia is a thing, to put it mildly, far from interfacing with state and popular interests.

In general, having criticized Lenin for his methods of building a new state formation on the splinters of the Russian Empire, the president himself was subjected to criticism and very slippery remarks from two opposite flanks. And this once again proved the following fact: interest in the intricacies stories and the historical path of Russia as such in our country is very great, and different views on the historical retrospective show often lead to spearheading not only among professional historians, but also among, so to speak, amateurs.

A few days later, during the inter-regional forum of the All-Russian Popular Front, President Vladimir Putin answered the question of one of the delegates that was specifically dedicated to Lenin’s statement of mistakes. In his response, the head of state decided to concretize his point of view, so as not to leave an understatement. The President explained that in the program of the first head of the Soviet state he personally does not like extreme liberalism, according to which any region can independently withdraw from the state, declaring full sovereignty. This, according to the president, was the very “atomic bomb” that Lenin laid under the state foundation. After all, as a result, the post-perestroika parade of sovereignties, which became the point of collapse of the USSR, actually grew out of the early ideas of building a Soviet state. 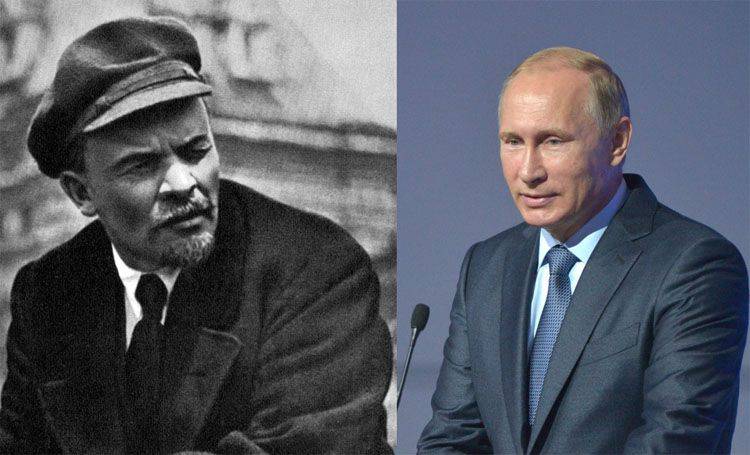 Putin stressed that he was more impressed with statehood with a proposal to one or another subject of autonomy, but not with proposals in the style “you can get out of the state at any time.” If the constitutions of all the major states were written with emphasis on the “way out”, it is unlikely that federations or even quasi-federative state entities could exist in the world by this time.

In order not to be again the object of criticism from the Russian “left”, the president made it clear that his attitude to Lenin’s idea of ​​state-building methods and the ideas of communism and socialism must be separated, just like these methods and ideas themselves. Of statements Vladimir Putin:

Like millions of Soviet citizens, 20 with over millions, I was a member of the CPSU, and I was not just a member of the Communist Party, I worked in an organization called the USSR State Security Committee for almost 20 for years. And this organization is the heiress of the Cheka, which was called the armed detachment of the party (...) Unlike many functionaries, I did not throw out the party ticket, did not burn it. (...) I really liked and still like communist and socialist ideas. If we look at the Code of the Builder of Communism, which was widely replicated in the Soviet Union, it is very similar to the Bible. This is not a joke, it is such an extract from the Bible in fact.

Why, after such statements by Vladimir Putin, it’s time to ask, who in modern Russia is the ideological leader of the “leftists”? .. Zyuganov, or what? .. It would seem that the Russian president showed his uniquely positive attitude to the ideas of the “left front”, therefore, he can also unambiguously be called a “left” politician. In fact, not everything is so simple, or, as it is fashionable to say for some time now, everything is not so simple.

Vladimir Putin, as they say, was not born yesterday, in order to take and give an unequivocal answer about his political preferences. After all, any announcement of the unambiguous preferences of a political ideology a priori can affect the political rating of the president himself. He told about sympathy to the communists - he lost a fair percentage of the rating from those who, to put it mildly, do not intend to sympathize with the communists. I would talk about sympathies to monarchists - would give another reason for reducing the level of public support from sympathizers who are already sympathetic to the same communists (real communists, and not ... well, in general it is understandable).

If we compare the statements of the president, he did everything to try to remain as if “above the fight”. Describing a clearly negative attitude to what is called the Red Terror, to executions and persecutions of priests, Putin drew "points" from those who think in the same categories, adding a few critical arrows to the leader of the world proletariat. At the same time, the president said about the sympathies of the Stalinist method of forming the state with the provision of autonomy, about the high-quality industrial breakthrough of the USSR and the unity of the people in the face of danger in the form of German Nazism, adding sympathy to socialist and communist ideas.

The result was that everyone heard from Putin what he wanted to hear (at least those who are inclined to listen to the statements of the president). Some have heard - "left", others - "liberal", the third - "frankly communist", the fourth - "anti-Soviet", the fifth - "Stalin". And given the fact that the parliamentary elections are not far off, it is this approach that can give the necessary points to the political structures that have become accustomed to speak under the portrait of the president. And the president is well aware of this. Another thing is that not all “marching” under presidential portraits to the highest echelons of power are ready to be guided by the principle “above the fight”, often trying, being in power, to concentrate on the circle of exclusively their own “purse” interests. And because the president is also aware of this ...

The result is the same: it seems to be far off before the elections, but the targeting by targets and the work with the masses have already begun. As one of the fields of such work: a discussion of historical issues that arouse great interest in Russian society and fuel interest in our home-grown form of debate.

Ctrl Enter
Noticed oshЫbku Highlight text and press. Ctrl + Enter
We are
Results of the week. “As Comrade Lenin commanded - to work, work and work - and then there will be many, many money!”Situational analysis of the death of the MH17 flight (Malaysian Boeing 777), made on the basis of engineering analysis from 15.08.2014
470 comments
Information
Dear reader, to leave comments on the publication, you must to register.