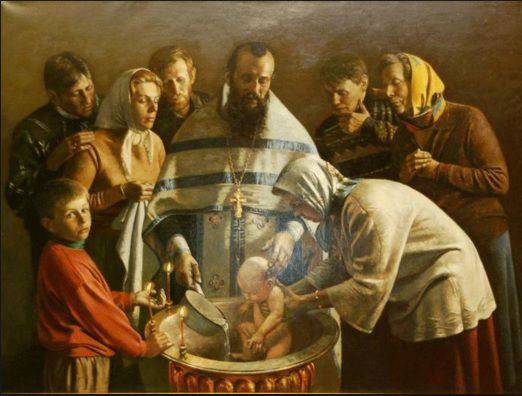 6 days ago, the Russian public blew up newspublished by an Italian resource Ilgiomale.it "The European Court of Justice: since March 2016, infant baptism is a crime" . There were many publications based primarily on emotions, and not on the mind. In principle, this is understandable. The first reaction of a normal person to such arrogant blasphemy and deprivation of his elementary human rights is a disturbance, and, at the same time, extremely emotional. But here the first passions subsided, and it was time to figure out the sober head.

The motivation of the decision is: “Baptism violates Article 16 of the European Convention in conjunction with Article 22: children, in fact, are not yet able to understand and, in fact, are not in a position to embrace faith, do not realize this. Baptism is an act that must be chosen consciously and cannot be imposed from above by a religious organization (in this case the Christian Catholic), especially at a time when Europe found itself in a real melting pot of races, cultures and religions. The practice of this sacrament of initiation is incompatible with the interests of the child, in accordance with Art. 3 the Convention on the Rights of the Child, ratified in May 25 1992 from a legal n.180, children must be protected in integrity and personal freedom. It is a step forward for Western civilization in respect of anything and everything. "

I propose to consider this decision from two sides - legal and sacred.

The European Court refers to the articles 16, 22 of the Convention on the Rights of the Child and considers baptism as an action that cannot be imposed on the child from above. In addition, it is said that the practice of baptism must be voluntary and conscious, and therefore baptism in childhood is incompatible with the interests of the child.

The ordinance of baptism also violates Article 3 of the Convention on the Rights of the Child, ratified by 25 May 1992, which states that the child must be provided with the protection and care necessary for his well-being.

Well what can I say? Let's read the documents yourself.


Convention on the Rights of the Child

1. No child may be subject to arbitrary or unlawful interference with the exercise of his right to privacy, family life, privacy or correspondence, or unlawful encroachment on his honor and reputation.

2. The child has the right to the protection of the law against such interference or encroachment.
http://www.un.org/ru/documents/decl_conv/conventions/childcon.shtml

That is, a certain organization that called itself the "European Court" by its decision clearly interferes with the personal and family life of a child. In accordance with Section 2, a child has the right to protection against such interference, and the legal representatives of the child - his parents, and not his uncles and aunts on Mercedes and Audi - should determine the forms of this protection.

1. States Parties shall take the necessary measures to ensure that a child who wishes to receive refugee status or is considered a refugee in accordance with applicable international or domestic law and procedures, either accompanied or unaccompanied by his parents or any other person, shall have adequate protection and humanitarian assistance. assistance in the application of the applicable rights set forth in this Convention and other international human rights instruments or humanitarian instruments to which the said of the state.

2. To this end, the participating States provide, when they consider it necessary, to assist any efforts of the United Nations and other competent intergovernmental organizations or non-governmental organizations cooperating with the United Nations to protect such a child and assist him in finding parents or children. other family members of any refugee child in order to obtain the information necessary for him to be reunited with his family. In cases where parents or other family members cannot be found, this child is given the same protection as any other child, for any reason permanently or temporarily deprived of their family environment, as provided for in this Convention.

Even if we take into account that this article concerns refugees and their children, to whom the European judges have suddenly attributed the citizens of the EU, then even it indicates "In cases where parents or other family members cannot be found, this child is given the same protection as any other child, for any reason, permanently or temporarily deprived of his family environment. ”

That is, the article is valid in the absence of parents or other family members. That can not be attributed to the legitimate families of EU citizens.

1. In all actions regarding children, regardless of whether they are taken by public or private institutions dealing with social welfare issues, courts, administrative or legislative bodies, priority is given to best interests of the child.

2. The participating States pledge to provide the child with the protection and care necessary for his well-being, taking into account the rights and obligations of his parents, guardians or other persons who are responsible for him by law, and for this purpose take all appropriate legislative and administrative measures.

3. States Parties shall ensure that institutions, services and bodies responsible for the care or protection of children meet the standards established by the competent authorities, in particular in the fields of safety and health and in terms of the number and suitability of their staff, as well as competent supervision .

The interests of the child are and are responsible for this is the parents. The decision of the European Court deprives the parents of this right, described in paragraph 2 of this article, which contradicts the UN Convention.

The European Court performs two main functions: it checks documents issued by European institutions and governments for compliance with contracts; interprets Union law at the request of national courts (in the framework of a prejudicial procedure).

This European Court, in accordance with its status, cannot interpret the UN Documents, in particular, the Convention, and even more so make some binding decisions based on the results of these interpretations.

Thus, the European Court itself violates the articles of the UN Convention and its own Of the protocol .

If the article is meant European Sudan per person his jurisdiction applies to all Council of Europe member states that have ratified European Convention for the Protection of Human Rights and Fundamental Freedomsand includes all matters relating to the interpretation and application of the convention, including intergovernmental cases and individual complaints, then Preamble in particular, it is clearly stated that it is accepted:

- pay attention to United Nations Convention on the rights of the child, in particular article 4, requiring States parties to take all appropriate legislative, administrative and other measures aimed at the realization of the rights recognized in the said Convention;

- recognizing the importance of the role of parents in the process of protecting and safeguarding the rights and best interests of children and considering that the state in case of need should also be involved in such protection;

- assuming, however, that in case of conflict it is advisable that families try to reach an agreement before submitting the matter for consideration by the judicial authority;

In the rationale for making such a decision by the European Court, I did not see the rules listed in the preamble. Moreover, this decision is contrary to the points of the European Convention.

In addition, the competence of the European Court of Human Rights includes:

- examine individual and intergovernmental complaints filed with the European Court of Human Rights against one or more Council of Europe member states or against the European Union;

Who then filed a complaint about infant baptism, not the parents themselves? What right to interfere in family relations have “individual citizens”, and how does this question relate to “intergovernmental relations”?

And although the European Court has left a loophole:

But this loophole was immediately limited by the court itself:

- to make Advisory conclusions on the interpretation of the Convention for the Protection of Human Rights and Fundamental Freedoms, on matters not related to the consideration of cases

The question arises: if the case was considered on the complaint, how legitimate the complaint itself, and whether the Court had the competence to consider it. And if there were no complaints, the decision itself is only advisory in nature, not binding.

In addition, this decision, as I understood it, which bears the form of a Law, is extremely selective. It would be more logical and more legitimate to, within the framework of one law, decide on ceremonies over babies of all religious denominations, Judaism and Islam, and not exclusively Christianity. Moreover, the rite of circumcision of boys is surgical in nature and provides for a change in the physical integrity of the human body. Baptism is exclusively ritual character.

Thus, this decision is contrary to the basic principle of jurisprudence - "The law is equal for all"and, accordingly, is itself illegal.

I could not find a single appeal filed with the European court against this decision, which means that there is tremendous pressure on society in Europe, which is not only contrary to, but completely distorts into opposing stated values ​​and laws.

UPD. I am not a lawyer, I have no legal education and have never worked in areas related to the application of any Rights. All of the above is a private opinion (IMHO), based on the study of the subject by a modern educated person.

The issues of ethics, morality, personal freedom, freedom of religion and sacral components will be discussed in the second part of this article.

Ctrl Enter
Noticed oshЫbku Highlight text and press. Ctrl + Enter
We are
Sodom and Gomorrah in a European wayAbout Stalin and Khrushchev
160 comments
Information
Dear reader, to leave comments on the publication, you must to register.