How did Washington offer Uzbekistan to join the "anti-terrorism coalition" proposed ..

January 26 2016
51
Last week, Foreign Minister of Uzbekistan Abdulaziz Kamilov was invited to Washington. The meeting with him was originally held by the US Assistant Secretary of State for South and Central Asia (a kind of “Asian equivalent” of Victoria Nuland) Nish Desai Biswal. There were also meetings with other US government officials. 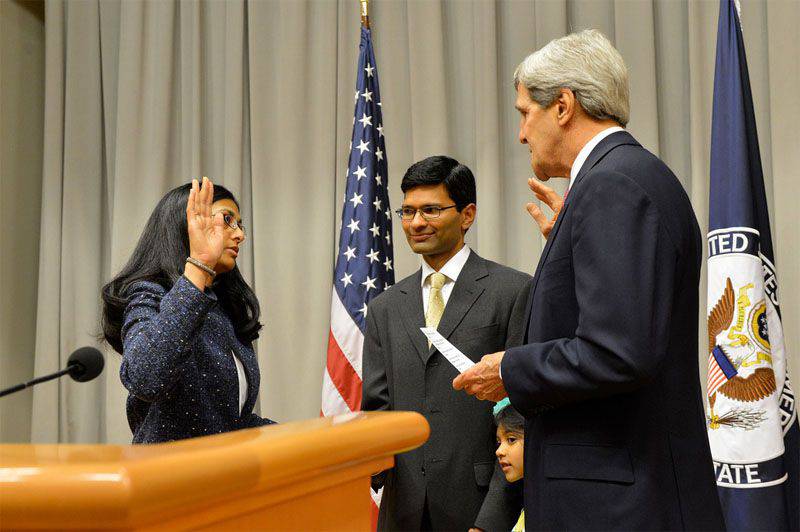 From a short statement press office Ministry of Foreign Affairs of Uzbekistan:
The delegation of the Republic of Uzbekistan headed by Foreign Minister Abdulaziz Kamilov, who is in the United States in connection with the participation in the sixth round of Uzbek-American political consultations, held bilateral meetings in Washington, DC with the senior director for South Asia of the US National Security Council Peter Lavoi, and. . Undersecretary of State for Political Affairs Thomas Shannon, Deputy Minister of Energy Elizabeth Sherwood-Randal and Assistant Secretary of State for South and Central Asia Nisha Desai Biswal.

The state of relations in various spheres was discussed with emphasis on the prospects for their progressive development, as well as some international and regional issues.

The members of the Uzbek delegation also held meetings and negotiations with representatives of a number of US ministries and departments.

In addition, Uzbek politicians in the United States met with Undersecretary of State Heather Higgenbottom, during which issues of interaction between Tashkent and Washington were discussed.

What was the main agenda during Uzbek-US contacts? According to the news agencies of the two states, there were several thematic lines, but among them the subject of regional security in Central Asia, and “security” in its context, which is understood by the United States of America, stood out. According to some data, the question was raised that a serious threat emanates from Uzbekistan on Afghan territory, especially as a result of the intensification of the so-called Islamic State militants in northern Afghanistan.

The American "partners" made it clear to the Uzbek delegation that Uzbekistan and its neighboring Turkmenistan, which declared themselves non-bloc states, "put themselves under a terrorist attack" in Central Asia. At the same time, another neighboring state of Uzbekistan, Tajikistan, was not mentioned, since it is located in the CSTO, and the United States, it seems, is trying to “make an offer that cannot be refused” to precisely those states in the region that are seriously confident in maintaining their own non-blocking status.

What is the proposal coming to Tashkent from official Washington? And it consisted in the fact that Uzbekistan was offered “to act as a united anti-terrorist front” in the region. The place of the main "at the front" American "partners", of course, reserve.

Such a proposal from Washington officials to Uzbekistan looks particularly interesting, if only because the Americans themselves have been sitting in Afghanistan for more than 14 years, not taking any active actions not only in the armed struggle against terrorism, but in blocking the channels of earnings received by militants, including the main - drug traffic (not in relation to the Taliban). Moreover, during the time of the American “anti-terrorist” operation in Afghanistan, the areas of “cultural” opium poppy growth have increased tenfold. Moreover, recently, literally every day, new square kilometers of territory are being added, controlled by various terrorist groups, including Taliban gangs and the so-called Islamic State.

And against this background (against the background of if not outright US support for militants, then at least for a steady "unwillingness" to interfere with the militants), the United States suggests that Uzbekistan should join the "anti-Igilov coalition." “Well, in that very coalition that, in more than 1,5, its operation in Syria and Iraq was destroyed, as the super-truthful American media outlets write, as many 40 thousands of igilovtsevs ... And the militant coalition destroyed so actively that the number of those constantly grew, the areas of the territories they occupy ... We must not forget about the other "feat" of the coalition - just in the region in which they are proposing that Uzbekistan should impose a regional "order" on the US authorities - in Afghanistan. We are talking about the bombing of the hospital of the international organization “Doctors without Borders” in Kunduz. For this war crime, the States still have not made a basic apology.

Apparently, keeping in mind all these facts of the "success of the United States in the fight against international terrorism", the head of the Ministry of Foreign Affairs of Uzbekistan Abdulaziz Kamilov found the strength to tell his American friends: "no." I am glad that Uzbekistan has enough bright heads among political elites, who are well aware that if the United States accuses President Karimov of violating the rights and freedoms of citizens and at the same time they invite to their coalition “to fight against Daisy (IG),” as they say wait thin After all, if official Tashkent accepted the US proposal, this would enable the States to at least deploy their new military base in Uzbekistan, and at the very best with the hands of the same partially controlled Afghan militants to transfer political chaos and military operations to Uzbekistan itself.

It will be important to recall here that the Uzbek President Islam Karimov at one time declared that Uzbekistan would not join the military-political coalitions, and also would not allow the deployment of foreign military bases on the territory of the country, as it would not allow the participation of the armed forces of Uzbekistan in armed conflicts country. Formally, these statements by President Karimov have already received the status of state law.

But, after all, the United States, as is well known, doesn’t like it very much when a state answers “no” to them.

And then "suddenly" on Radio Ozodlik (the Uzbek branch of Radio Liberty) with a kind of frantic activity (even against the background of previous versions) began to publish materials that were clearly aimed at discrediting the Uzbek authorities. Materials written, of course, by activists ... On the eve of Online the radio station released material on how “freaks in power” (this is a quote) sanctioning the cutting of plane trees in Tashkent, and the people “not like a flock of bleating, but submissive sheep, but as a school of silent fish (...) doomedly waits for a frying pan” (this also quote).

Cutting out plane trees is, of course, quite bad, but only publications of this kind of materials with conclusions about the need to certainly sweep away the power of Uzbekistan. Is this not another attempt to set the country on fire using absolutely, sorry for the jargon, the left reason? .. The theme of color revolutions arranged by the States , clearly not exhausted.

But Tashkent for a bold and independent position in contacts with the United States, as the youth says, is five points! But also to relax, considering that the theme of the “American proposal” has been exhausted, Tashkent is also useless.

Ctrl Enter
Noticed oshЫbku Highlight text and press. Ctrl + Enter
We are
Uzbekistan and the United States: what will a great regional friendship lead to?Why Uzbeks and Tajiks do not take the world
51 comment
Information
Dear reader, to leave comments on the publication, you must to register.