From the history of the title "sailor" 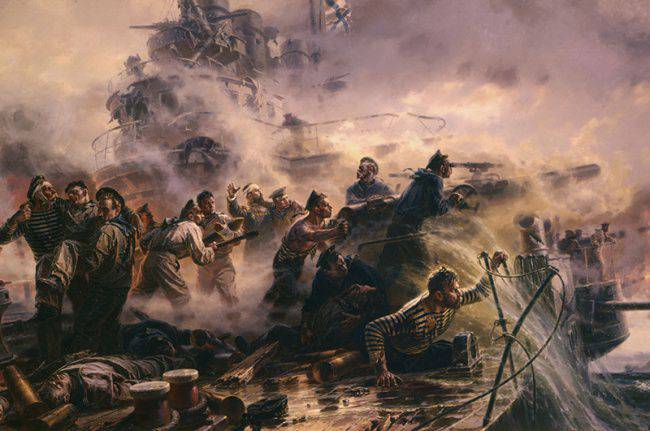 The word "sailor" (in the old spelling also occurs "sailor") originates from the Dutch "sailor", which means "mastmate." Until the XNUMXth century, it was not in Russian, and only during the organization of Peter the Great’s regular military fleet it is widely used, as are many other Dutch marine terms.

From the end of the 17th century until the end of the Northern War (with the Swedes) in 1721, quite a few foreigners were hired into the Russian naval service, from sailor to flagship inclusive. From the time of Alexei Mikhailovich in Europe, special agents were engaged in direct hiring and recruiting them — either local or sent from Muscovy. For a fee, such a mission was sometimes taken upon by all kinds of Russian envoys, couriers, and even merchants.

The most numerous influx of foreign sailors, naval officers and specialists took place during a visit by Peter I of a number of European states, as part of the Great Embassy in 1697 — 1698. Then Peter laid the responsibility for the recruitment of foreigners to the Russian service on Franz Lefort, who was assisted by the Dane Cornelius Cruys, who had just been accepted into the Russian service then and was appointed vice-admiral. By the way, a lot of naval experts attracted the king himself. Thanks to this, in 1698, about 700 came to service in the Russian fleet. Among them were two flagships, 64 officers, 115 non-commissioned officers, 354 sailors, 50 shipwrights and specialists, and 52 marine doctors.

Later, until about 1717, foreigners were attracted only to vacant positions. However, if necessary, the Russian ships, as it was in 1705, in Arkhangelsk, were recruited sailors from merchant ships for a very decent reward. Then they quickly scored 120 Dutch sailors. But this form of attracting sailors was practiced very rarely, because it entailed complications in relations with European states and immediately reflected in foreign trade.

During the Northern War, hired foreign sailors went to Russia either on neutral commercial ships, or as crew members on our warships bought abroad. True, many sailors persecuted for their religious convictions traveled to Muscovy by land, sometimes overcoming considerable difficulties.

The second, which turned out to be the largest, hired foreign sailors to the Russian fleet took place in 1717, when in Amsterdam, Russian agents led by Prince Boris Kurakin, the Tsar's closest relative, attracted 1500 sailors from almost all European fleets. Unlike the previous one, this recruitment was clearly temporary. If before Peter I, accepting foreigners to the fleet of necessity, gave them considerable advantages over Russian sailors, as teachers before students, now he tried to quickly replace foreigners with Russians, who "cost less money and are much smarter." So, by the autumn of the 1721, on the ships of the national fleet, among the 7215 sailors there was not a single foreigner, and among the higher ranks, it was ordered to conduct an examination, "leaving only decent ones on the ship and galley fleet."

The first Russian sailors, from the time of the Pereslavl "amusing" flotilla, were the soldiers of the Preobrazhensky and Semenovsky regiments. It is believed that it was from them that, by order of Peter, General Patrick Gordon recruited teams for "amusing" ships and vessels. At the same time, the role of the first Russian admiral Franz Lefort is diminished, for the soldiers from his regiment became sailors, took part along with the Transfigurations and Semenovtsy in the Azov campaigns, Peter’s trips to the North, and sailing on the first Russian ships. True, it was believed that the naval service was a temporary matter for them, but, according to documentary sources, quite a few former Guardsmen remained in the fleet. Some of them reached the ranks of officers, and, for example, such as Ipat Mukhanov and Naum Senyavin, even went out to the flagships.

In 1700, 504 was considered “permanent” for the Azov fleet, that is, domestic sailors who were renamed this title from newly recruited young soldiers. In addition to them, 600 people arrived from Moscow, specially selected to perform naval service. The first recruitment "in the sailors" was produced by Peter I in 1702, in the village of Preobrazhensky. In the course of it, 1700 people were recruited from "seamen of various rank from 12 to 20 years" who wanted to serve the sea.

In 1703, there was a royal decree about the immediate transfer "from Azov to Olonets" of all foreigners, Russians, as well as captured Tatars and Turks, "who were marching on galleys in the sea." 22 January next year, Peter I ordered in Moscow and other cities to recruit 100 people "of all kinds of bureaucrats of people in the sailor's service." Those who wished were recorded in the order of the Admiralty Affairs, and the king guaranteed them a monetary allowance of two rubles a month, moreover, two more rubles for clothes, and in the immediate service — bread, salt, meat, fish. They were replaced on Ladoga and Neva by soldiers unfamiliar with the sea. And, in general, it can be considered the first set on the Baltic Fleet.

It should be noted that from the very beginning people were recruited into the sailors from localities where the population was familiar with river navigation and fishing. There is evidence that from 1706 th to 1717. from Moscow and Moscow Province, Tobolsk, Tyumen, and other major river cities, 1000 people were annually taken to sailors.

In the spring of 1720 of the year, in preparation for a decisive attack on the Swedish fleet, Peter I ordered to fill up Russian ships with sailors from among the soldiers of the Finnish Infantry Corps, who were already sailing in galleys and 2000 recruits from the Moscow province. At the beginning of 1721, in St. Petersburg, the highest decree was issued on voluntary admission to the sailors of "all sorts of officials of people other than the Swedish people," and it was announced that "only those who were not guilty, not committing theft or resentment to landowners, landowners or outsiders" can go from serfs . The serfs, naturally, did not miss the opportunity to take advantage of this royal mercy.

Following the pattern of foreign fleets, the so-called naval soldiers were part of the naval crews. Peter I wrote in his note “Definition of a beginning fleet on the Ost-Zee”: “It is necessary to set up regiments of naval soldiers and fasten them to captains forever, who should take corporals and sergeants from old soldiers for the sake of better training of the system and orders”. As is known, in 1705, a naval soldiers' regiment was formed in the number of 1200 people. 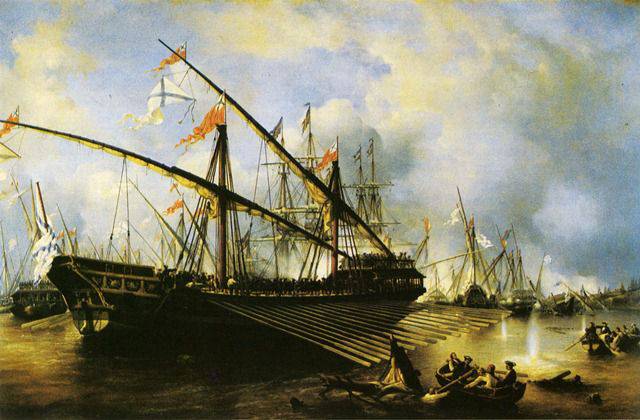 The main duty of the naval soldiers was carrying ships on guard duty, and during the battle of them were boarding and landing parties. Marine infantry battalions were created from infantry regiments in 1712, for the ship fleet and admiralty of 600 -650 people in each. By 1715, there were already five of them, and they were called "Admiral", "Vice-Admiral", "Rear-Admiral" and "Admiralty".

Naval artillery was not originally reduced to special teams. Artillerymen with other service personnel of the guns were called gunners, however later Peter I introduced the regulation here. Ship crews began to consist of sailors and gunners by two-thirds and by one-third - from soldiers. In this case, the sailors were divided into "old" - experienced, who were already familiar with the maritime affair, and "young" - recruits. Both of these categories differed at the beginning in terms of money allowances, but later "articles" were introduced from 1 to 4, from highest to lowest. In 1710, the 4 article was abolished, and in 1720, the article 3 was abolished. Thus, by the year of 1721, the sailors of the 1 and 2 articles served in the fleet. On the ships, as a rule, there was a third of the sailors of the 1 article and two thirds - the 2.

Marine история keeps the memory of the so-called "free sailors." In 1834, in the Novorossiysk Territory, in Nikopol and Aleshki, and later in Kronstadt, societies or workshops were established to recruit merchant ships. They were called "free sailors". These sailors were required to serve at least 10 years, of which the first 5 - on warships, after which, having received a patent for the title of "experienced" sailor, were sent to merchant ships. Their families were exempt from all taxes, military billeting and recruitment. However, in 1883, the "free sailors" were abolished.

The title “sailor” introduced by Peter the Great in the imperial fleet was the first for an ordinary lower rank. As in the time of Peter the Great, they were subdivided into sailors of the 1 and 2 articles. The sailors of the 1 article were made to this rank by the commander of the ship or crew, after passing the first year of service. The sailors of the 2 article were credited from recruits. This continued until the February revolution of 1917, which abolished the ranks and titles, equalized the class and abolished titles. After October 1917, in the domestic fleet was introduced a new title of "Red Navy", which was later again replaced by "sailor".

Ctrl Enter
Noticed oshЫbku Highlight text and press. Ctrl + Enter
We are
Prisoners of war as losses and trophies on the Russian front of the First World War.Pirates of the West Indies and the Indian Ocean of the second half of the XVII - early XVIII centuries
7 comments
Information
Dear reader, to leave comments on the publication, you must to register.