In Kiev, gathered to dismantle the Soviet emblem from the shield "Motherland"

January 21 2016
106
The stubborn, or rather stubborn, struggle against the Soviet legacy continues on the territory of modern Ukraine. Thus, Vladimir Vyatrovich, director of the Institute of National Memory of Ukraine (in Kiev, is working in Kiev), on his Facebook page, said that the next stage of “de-Sovietization” will be associated with dismantling the coat of arms of the USSR, located as a bas-relief on the sculpture “Motherland” mother "in the center of the Ukrainian capital. 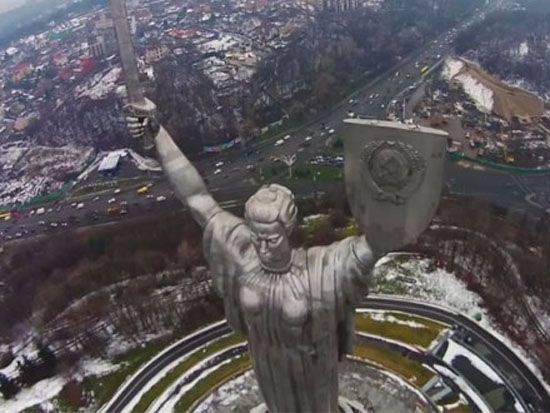 At the same time, the above-mentioned Institute of National Remembrance of Ukraine motivates the decision to dismantle the Soviet coat of arms with the fact that “there is no such state as the USSR”. According to the same logic, in Ukraine it is necessary to dismantle in general everything that was created in Soviet times, because the USSR is no longer there. Moreover, Ukraine will not have to be dismantled, if only because it acquired its present borders during the Soviet era. Or is the memory of the Institute of National Memory short? ..

Frankly, not all Ukrainian citizens expressed support for the idea of ​​dismantling the coat of arms from the shield of the Motherland. Moreover, if some are warped by the thought of wars with monuments and historical heritage, others are concerned about the high cost of changing symbolism. Some even decided to combine the "hot with purple" and suggested changing the "semantic load" of the sculpture. From the proposal of Nikolai Marusik, which is published in the tape of the mentioned Vyatrovich:

Our proposal is to change the semantic function of this statue. It will never be a symbol of the Soviet occupation, its new function is the art-visual lighthouse, which shows innovative approaches in cultural policy and national heritage issues. Our solution is a knight's move. But if the shield is cleaned, I’m not sure that it will remain aesthetic, it will certainly attract criticism even from those who fully support decommunization, and this story itself will become a monument to the fight against symbols.

Ctrl Enter
Noticed oshЫbku Highlight text and press. Ctrl + Enter
We are
106 comments
Information
Dear reader, to leave comments on the publication, you must to register.