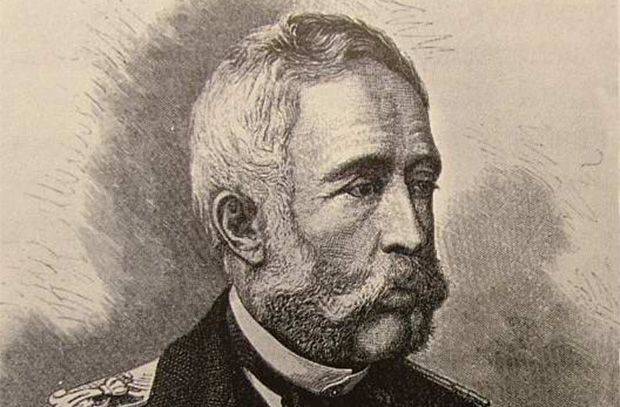 The third head of the RTO did not formally accept the post, but did a lot for the Society

Konstantin Nikolaevich Posyet is the strangest of the chairmen of the Russian Technical Society: immediately after his election, he formally refused to direct them, citing employment, but subsequently repeatedly assisted the Society with advice and high-level support: it was not for nothing that Shoulder was a successful naval and managerial career. In addition, like most chairmen of the RTO, he was a true statesman - not only the minister, but also, for example, the mentor of the emperor's son.

From cadet to minister

Konstantin Nikolaevich was born on December 21, 1819. The family belonged to the French noble family: his grandfather, who moved to Russia, was engaged in the cultivation of vineyards near Astrakhan on the personal instructions of Peter I. Like his father, the Finnish commander naval crew, Konstantin Nikolaevich graduated from the Naval Cadet Corps. Later he made a successful naval career: the reformed artillery training system contributed to the successful actions of the Russian troops in the North Caucasus, for which Alexander II even awarded Posyet the Cross “For Conquering the Caucasus”. Thanks to the participation in the voyage of the frigate "Pallas" with a diplomatic mission to the shores of Japan, Posyet mastered Japanese and Dutch (the Dutch language was used by the Japanese side in the mid-XNUMXth century to negotiate with the European powers), and also made friends with Ivan Goncharov, who described the voyage to famous cycle of essays.

Subsequently, Posyet took the post of adjutant Alexander II and served as the head of the Special Detachment of the Imperial Yachts. In 1870, the squadron under the command of Posiet, who was already in the rank of vice-admiral, paid a friendly visit to the United States, Japan, China, the island of Madagascar. During this voyage, Novaya Zemlya was discovered, where the Russian flag was raised for the first time. On one of the ships of the squadron, the son of Alexander II — the Grand Duke Alexey Alexandrovich, whose guardian was appointed Konstantin Nikolayevich, was in the voyage: the tsar ordered the vice admiral to instill in the youth a love for the sea. Upon his return from the voyage, Posyet, by the way, founded the Imperial Russian Society for Water Rescue (later on, the same OSVOD, so well known to every Soviet person).

A new stage in the life of the vice-admiral began in 1874, when he headed the Ministry of Railways. In just the 14 years of his leadership, the total length of the Russian railways has increased by a third - more than 10 thousands of miles. In the development of the railway network, Posyet was a “statesman”: he advocated a state monopoly on the way, believing that joint-stock companies could not provide either high rates of railway distribution or adequate transport safety. The correctness of his opinion will be further confirmed by the collapse of the royal 17 October 1888 train of the year, due to the irresponsibility of employees of a private company. Looking ahead, we say that this incident will play a sad role in the fate of Posyet himself.

Thanks to the leadership of Posyet, in 1885, the first General Charter of the Russian Railways was adopted. The Minister actively developed the education system for railway employees — during his leadership, the number of vocational schools graduating from the railway station increased from 9 to 30. At the initiative of Posyet, the government banned the import of foreign-made rails and appointed domestic manufacturers of the award for each pound of rails they produced.

For his contribution to the development of Russian industry in 1887, Posyet was awarded the "Society's most important medal - a large bronze, issued for special merits." The value of this award is determined by the fact that only 12 of them were handed over to the entire period of its existence.

Posyet did much to turn St. Petersburg into a port of world importance, with the help of the best specialists of that time, designing and building the Sea Canal and Sea Port, reconstructing the transport canals of the Mariinsky shipping system connecting St. Petersburg with the inland seas - Ladoga and Onega lakes, as well as large cities of the Russian North and North-West. After carrying out the reconstruction of a number of other major ports of Russia - Libavskiy, Arkhangelsk, Odessa, Poset pursued the goal of achieving interaction between different types of transport: cargoes were delivered by rail and dirt roads, which required work to expand the road network around the port cities. 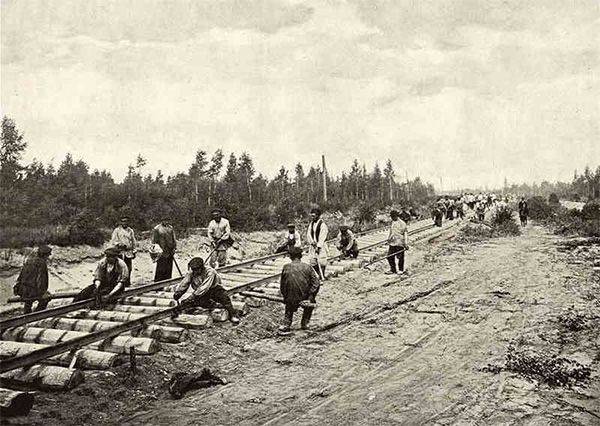 Construction of the Trans-Siberian Railway. Photo: wikipedia.org
Posyet was also the “godfather” of Transsib: at his insistence Alexander III signed a decree on the construction of this railway, and already in September 1888, the first train came along it to Ufa. However, the same year was the time of the end of his career as minister: after the collapse of the royal train, he did not consider himself the right to maintain this post. The king signed his resignation only after the fourth petition for her.

Participate in the activities of the RTO Posiet begins in 1880-s. It is thanks to him that many experienced industrialists and engineers who had previously proven themselves at the Ministry of Railways joined the Society.

The most famous of them is the breeder Nikolai Ivanovich Putilov, with whom he was familiar from the times of the Marine Corps. In the 1864 year, as part of a partnership that included Obukhov and Kudryavtsev, Putilov began building a steel mill (the future Obukhovsky) on the Neva, where for the first time in Russia they began to produce armor piercing shells and large-caliber guns to equip Russian warships. Later, it was Putilov who became the pioneer of rail-rolling business in Russia, the first to benefit from the premium award introduced at the Posit filing. In essence, without this award and the state order for 2,8 million poods of rail, the production based by Putilov would not have been possible in principle. Thanks to Posit’s mediation and Putilov’s charitable activities, many initiatives of the Society became possible: for example, it was Putilov who funded research on the elasticity of gases, which Dmitry Ivanovich Mendeleev conducted in the Society’s laboratory.

After the death of the former chairman, Kochubey, the RTO began to look for a candidate that satisfies two basic requirements: on the one hand, it was assumed that there would be a person with leadership experience in the engineering and technical sphere, on the other hand, the candidate needed to have authority and connections in society. The choice fell on Posieta, who left the post of minister, but was still a member of the Council of State, and already on April 11, by the general meeting of PTO members, he was elected Chairman of the Society. Alas, the Society was disappointed: immediately after the announcement of this decision, Posyt refused to take office because of the employment of official affairs. The RTO, which was very strict and legible about the election of the leadership, could not elect a chairman for two years.

However, Konstantin Nikolaevich, despite his formal refusal, did not stay aside from the work of the Society. In many ways, thanks to the activities of Posyet, which focused on supporting only certain projects, the RTO moves to a new model of work organization — instead of general meetings, research and educational activities of the company are directed by specialized departments. So, Posyet lays the foundations for a new shipbuilding direction for the Society, which will flourish in the RTO after his death. In the 1890s, the well-known hydrograph and mathematician Alexei Nikolaevich Krylov lectured on the walls of the Society, explaining the patterns of ship pitching (thanks to his discovery, Krylov in 1998 will be the first Russian scientist to receive the gold medal of the British Society of British Scientific and Technical Society - the Society of Ship Engineers ), and the pioneer of the use of icebreakers, Vice-Admiral Stepan Osipovich Makarov, demonstrates in the Libava branch of the Company a model of his famous icebreaker “Yermak”.

Many scientists who were in the RTO, Positt, until his death in 1899, hosted at his apartment in St. Petersburg, which provided them with ample opportunities to promote the initiatives of the Society: after all, they could literally have tea with ministers and major government dignitaries, from whom depended the fate of their projects.