Is it better to be friends with Russians?

January 21 2016
58
American analysts believe that Russia is becoming the most important diplomatic partner of the United States in the field of security in Syria, despite the negative attitude of the Obama administration to Moscow’s support for President Bashar al-Assad. As representatives of the White House say, cooperation with the Russians on the Syrian issue is the lesser of the evils. 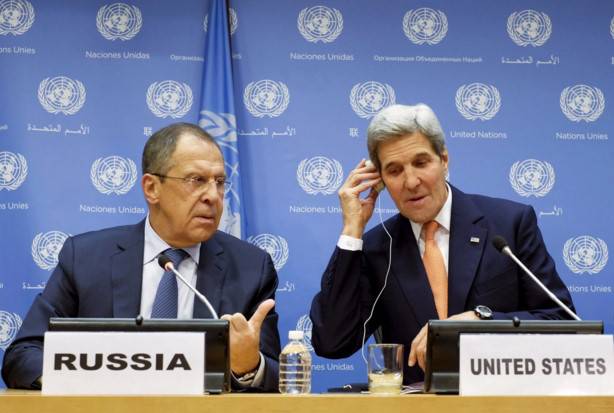 David Ignatius, columnist Washington Post and a member of the PostPartisan blog, recalls that Russian-US cooperation on Syria currently includes regular diplomatic, military, and intelligence contacts. Moscow and Washington are developing a “deconflicted” process where any accident or misunderstanding can lead to a catastrophe.

Representatives of the White House administration believe that cooperation with Russia is the lesser of the evils, the publicist notes. The Obama administration, having difficulty in finding a common language with Russian President Vladimir Putin, “especially after his actions in Ukraine,” admits that it cannot do without cooperating with him on Syria. Washington hopes that Putin will support the efforts of the United States to organize ceasefire negotiations: after all, this is the only way to avoid a protracted conflict.

“We are still skeptical of Russian interests and intentions in Syria, but we still believe that they (Russians) will become an integral part of any political solution to this conflict,” said one senior official from the White House administration.

Recently it seemed that Putin was ready to agree with the position of the United States regarding the withdrawal of Assad, the author writes. In an interview with the German newspaper Bild, the Russian president hinted that he could give Assad political asylum. He said that granting asylum to Snowden, who had previously worked for the US National Security Agency, was “far more difficult” than if the same was done for Assad. The Russian leader also noted that during the Syrian conflict, Assad made "many mistakes."

Such statements by Putin at the White House were taken "very seriously." This journalist told another representative of the administration.

“I think that in this way he (Putin) sent us a signal about his position,” said the official. In addition, his words are quite consistent with the statements that Russian officials admitted “in private”.

Syria has also become the subject of a telephone conversation between US Secretary of State John Kerry and his Russian counterpart, Foreign Minister Sergey Lavrov. They talked about plans related to a meeting in Geneva scheduled for 25 in January 2016, under the auspices of the UN, regarding the organization of a united opposition front. Kerry and Lavrov are likely to meet in Europe next week, where they will talk about the situation in Syria, first of all, about how Iran and Saudi Arabia will participate in the talks simultaneously.

One of the participants in communications between the US and Russia is CIA Director John Brennan. His themes are: Islamic State terrorists threatening both the United States and Russia, and crises in international relations, such as the one that broke out between Moscow and Ankara after the incident with the Russian plane in November 2015 of the year.

The dialogue on combating terrorism between Washington and Moscow was highlighted by Brennan at the Center for Strategic and International Studies. He told the audience that Moscow and Washington are “sharing information”.

According to Mr. Brennan, the dialogue "must be intensified." Brennan is “determined to continue working” with Russian colleagues. Cooperation is important for both states.

One of the well-known supporters of Russian-American cooperation is also King Abdullah II of Jordan.

According to US officials, this monarch seeks to create a special relationship with Putin and hopes to coordinate military actions with Russia against the Islamic State in the near future. There is already a joint Jordanian-Russian military coordination center in Jordan. Jordanians are even thinking about a coordinated attack on the position of the "Islamic State". So far, however, the journalist notes, the Russians seem to continue to strike at anti-Assad rebels in southern and northern Syria.

Last year, Jordanian officials also discussed with their American counterparts the creation of an advanced operational base inside Syria, which could be a unifying factor for the Sunni forces fighting the terrorists of the Islamic State. This base is described as modern Fort Apache. It is supposed to be organized by special services from Jordan and from other Western and Arab coalition partners. Previously, US officials were skeptical about such a move, but now they show a benevolent attitude towards it.

As for President Obama, David Ignatius notes, someone considers his willingness to work with Putin to be an act of “foreign policy realism”, and someone is an act of “despair”. Such contradictory estimates depend on the views of analysts. However, some of them claim that in Syria the positions of Russia and the United States do converge.

And here is another American newspaper - Los Angeles Times.

Russia's participation in the conflict has changed the balance of war, analysts say. The military successes of the government army, including thanks to air strikes inflicted by Russia on the IG, strengthened the position of the Assad government. And this naturally led to a political result: the United States and other states eased the demands for the immediate resignation of B. Assad.

Experts even talk about the upcoming victory of Assad. “Assad wins. Russian aircraft changed everything that happened, giving the Syrian army an unimaginable incentive to fight, ”said D. Landis, director of the Center for Middle Eastern Studies at the University of Oklahoma.

Director of the Al-Quds Center for Political Studies (Amman) Oraib Rantawi believes that Russia's participation in the war affected the strategy of Damascus’s neighbors: the latter’s actions in Syria were limited.

Recall in conclusion that on January 25 negotiations will begin between the Syrian government and opposition forces in Geneva. At this meeting, Washington intends to eliminate all existing differences with Russia. Americans are going to "honestly" state their "vision" of the future of Syria. This was stated by the representative of the US State Department, John Kirby. “There is nothing wrong with leading these discussions to honestly present each other how we see the future,” he said.

Of course, Washington will take into account only its own "vision." The one that was voiced by Hillary Clinton. It may have become "softer", as other analysts believe, but in fact has not changed.

Observed and commented on Oleg Chuvakin
- especially for topwar.ru
Ctrl Enter
Noticed oshЫbku Highlight text and press. Ctrl + Enter
We are
Syria: Bashar Assad comes, and for that he will not be allowed to attend the Olympics in LondonSyria: Americans scare themselves, and Asma Asad buys chairs
58 comments
Information
Dear reader, to leave comments on the publication, you must to register.