January 20 2016
94
Oh, these Crimean Kiev Tatars. How they bothered the inhabitants of the peninsula. Sometimes I talk with Crimeans. Laugh And waiting. Let them come. We even ask military units not to get involved. And our Tatars will beat them. 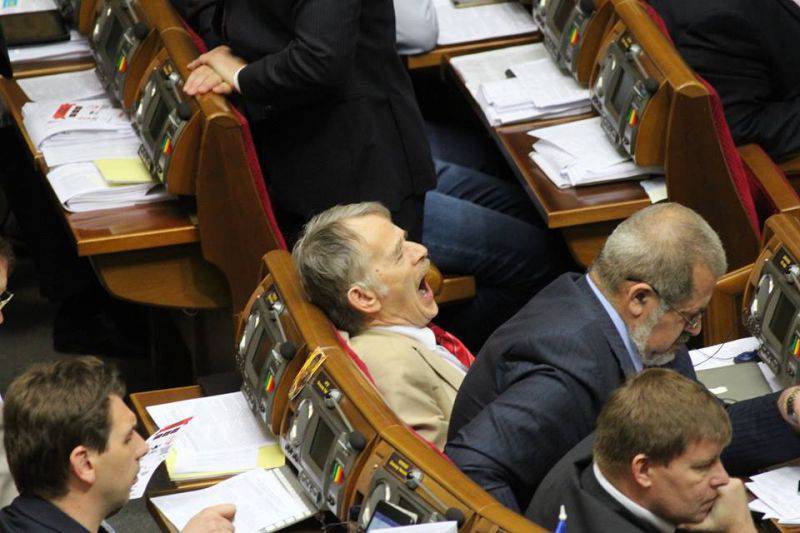 This, of course, is a laudable desire. Only we can not allow this. Not ordinary citizens, even if angry, should be dealt with by gangsters, but specialists. Crimean Tatars and so much work. Sowing soon. And there ... There is a lot of work for everyone in the summer.

I recall some chronology of events. Readers, of course, have long been known to everyone. We published materials periodically. But ... Repetition is the mother of learning.

September 20 Kiev Tatars began a food blockade of the Crimea. We heard a lot then that the Crimea will soon howl from the famine. And Russia will run away from such an "acquisition." Total? And the result is simple. Ukrainian goods were quickly replaced by Russian ones. Ukraine has lost the market. And the Crimeans were able to sell agricultural products at home, and this is especially important for the Crimean Tatars.

22 November undermined four power poles. The energy blockade began. And nothing that part of the Kherson region was left without light. The main thing is the Crimea in the dark. Total? The lack of electricity forced Russia to go unconventional way. Officials can even "move" if they squeeze. Especially if this very "presses" the president himself.

And in December, the peninsula began to receive electricity from the Krasnodar Territory on a new energy bridge. Moreover, the construction of its own stations has intensified in the Crimea. And the second phase of the energy bridge should be commissioned in May. The love of the population of Crimea to the Tatars of Kiev only increased. It was then that the first requests appeared to allow faces to be slammed into the insolent faces.

Next talk. I mean the naval blockade. The Kiev Tatars have been burning for a long time, but ... Blocking the sea on the territory of the Odessa or Ilyichevsk port is the ceiling for Islyamov and K.

And then, 26 December, and a statement appeared that now the Kiev Tatars will form their battalion. And not just a battalion. Islyamov said that the Crimean Tatar battalion would strike at the Crimea. That's when Crimeans began to rub their hands. Though we meet face to face with these traitors. I'm tired. Need to reassure. And in vain ...

They are not such "riders without a head" to climb into the Crimea. So, our dear compatriots, do not dream, but prepare seeders, harrows and what else is needed for sowing. And in your free time you can do, for example, boxing or something similar.

14 January, even the president of Square Poproshenko admitted that he is coordinating the actions of the Kiev Tatars against the Crimea. Those. official Ukraine wants to spoil the peninsula with the hands of the Tatars.

And here is the apotheosis of events. 18 January is done. The battalion is created. True, like everything in today's Ukraine, with delusions of grandeur. The battalion is rather a name. 250 people. More Tatars not found. Although planned 580 people.

But again I appeal to the compatriots of the Crimea. Do not rejoice. Again, I'm talking about sowing. You will not see this battalion. They will confront the Crimeans in ... Kherson region. It is quieter and far from your fists.

"We will be engaged in ensuring law and order and stability in the region. So that no one would think that they can shake things up, make some kind of rebellion and then a referendum, as they did in the Crimea. We must not lose any territories any further. We must return the territories. We must be prepared for the fact that as soon as the Crimea becomes free - and we will liberate it - we will continue to deal with law and order inside the Crimea.

This I quoted a fragment of yesterday’s interview of Islyamov "Ukrainian Pravda". By the way, since the creation of this battalion is supervised by the president himself, then he came up with the legal status. It is now a division of the National Guard. Interestingly, and they will obey Avakov? This is just a thought.

And now some more thoughts. Just these thoughts appear and do not drive them out of my head. It is clear that this “battalion” will never be in the Crimea. It is clear that all these blockades and other peremogi are more for internal use. It is clear that without having real levers of influence on Russia (namely, on the Crimea), Poproshenko will use the nationalists. Be they even Martians. But then why?

The answer, it seems to me, is precisely in the phrase that I quoted. Kiev authorities decided to give the border area in the power of the Tatars. After all, it is clearly seen that even now, even before the creation of an armed formation, the Tatars in Kherson suppress local authority. And not only civil. Statements that civilian activists will monitor the work of border guards and customs officers, said about the control of security forces. While control, and then?

Amending the Constitution of Ukraine is not far off. The unitary state will soon disappear. What's next? Then the federation, or rather the confederation. Only in this case there is a ghostly chance to save Ukraine.

It seems to me that Kiev is going to create a new autonomous republic of the Crimean Tatars. Thus, another divided people is created. And the constant pressure on patriotic feelings will force this people to reunite. So, according to the Kiev authorities, it will put pressure on Russia.

But haven't the Squares miscalculated? A reunion can be not only in the annexation of the Crimea to the Kherson Tatar autonomy, but also in the reverse order. Which, I think, is more likely. But this is a very distant prospect. In the meantime ... Enroll in the Crimean Tatar battalion of the National Guard of Ukraine. Though who sign up. Religion and nationality do not matter. The main thing - sign up. Well, at least someone ... There are no people at all.

Ctrl Enter
Noticed oshЫbku Highlight text and press. Ctrl + Enter
We are
Results of the week. “I am tired of these faces. There are many people, but no people. ”Russia, Turkey and the "Crimean Question"
94 comments
Information
Dear reader, to leave comments on the publication, you must to register.