January 20 2016
41
Financial analysts are predicting the largest stock market crash around the world. "Bearish Roar" is already racing from Wall Street, it is heard in London and Paris. Last Wednesday, the Dow Jones Industrial Average fell by the next 300 points. The US stock market is sinking, oil is falling in price, showing the worst performance for the whole historyThe situation in the Chinese economy is also not the best. Experts talk about the impending financial crisis that will be caused by the Samo-Yed economy, which exists for the sake of the absurd desire for "growth." 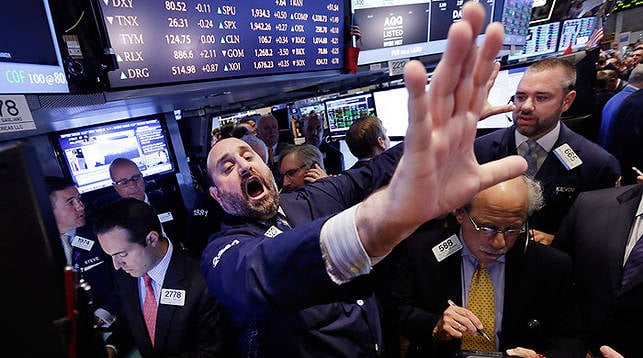 About the coming collapse of the world economy told Chris Matthews in a popular magazine "Fortune".

The most “bearish” of all the “bears” is Albert Edwards, a strategist from Societe Generale. He could say little about the world economy, more precisely, about its prospects in the coming years. Recent events have only strengthened his conviction that the world is on the verge of disaster.

Edwards predicts that the US stock market will fall by as much as 75%. For comparison: during the last financial crisis, the biggest failure was 62%.

According to Edwards, since the last financial crisis, the world economy has become hostage to the program of mass buying up of Fed bonds, launched to support stock prices and stimulate growth in emerging markets. As a result, another financial bubble was inflated, which in addition was accompanied by a “shale investment boom” in the United States.

The policy of quantitative easing of the Fed, pursued to reduce long-term interest rates, also influenced. Now that the Fed has stopped buying bonds and actually raised interest rates, the artificial increase in asset prices, which has occurred since the last financial crisis, has stopped. “The illusion of prosperity was destroyed, and the boom is now turning into a collapse,” the expert believes.

Hits the world economy and the situation in China, I'm sure Edwards. He argues that the Chinese top politicians have fallen into an extremely difficult situation: in fact, the yuan is overvalued, and in this situation, an attempt to devalue the yuan looks “too bold.” Money from the wealthy Chinese will not flow into the Chinese economy, but out of it, and in the future this will lead to a destabilization of the situation.

The Chinese manufacturing sector has no choice but to lower prices for products in order to maintain its share in world trade. But this will lead to deflation in the PRC. And then there will be a blow to the economies of Western countries. “The western manufacturing sector will be stifled by this import deflation loop,” Edwards said.

The end result of all this will be even greater recession. In the United States, with already low interest rates, the Fed will not be able to take any measures to stimulate demand. What Edwards calls a "bear market" will come into the world. The result of the onset of the "bears": the S&P index will collapse by 75%.

However, Chris Matthews notes, Mr. Edwards has already made similar negative predictions. He has been doing this for many years. In 2010, for example, he believed that the S&P would also fall. It didn’t come true.

Of course, this does not mean that Edwards is generally wrong, the author writes. Just as Edwards says is true when he claims that global stock markets "hopelessly" depend on a policy of stimulating central banks. If this incentive stops, prices may well fall to the bottom.

Another thing is that the analyst who cannot inform investors is worthless when prices will collapse. Investors hear complaints about state policy, but do not receive the necessary advice.

There is another view on the global economy.

Analyst Karl Weinberg in a recent commentary referred to the recent decline in oil prices by almost 40% (compared to a year ago). He called this reduction “unthinkable,” and then reminded readers that global economic downturns tend to occur when the economy generates “excess capacity.”

At the same time, the “optimist” Weinberg points out the alarming situation in China, affecting the global oil market and commodity markets.

In short, "clear weather" investors should not wait.

China is indeed playing the leading fiddle in the impending crisis of the global economy.

According to the newspaper Kommersant with reference to Xinhua, China’s GDP growth rate in 2015 was 6,9%. The rate has become the lowest in the last 25 years. According to preliminary data from the State Statistics Office of the People's Republic of China, China’s GDP in 2015 amounted to 67,670 trillion. yuan, which is 6,9% more than in 2014 year.

"Kommersant" recalls that the numerous "bubbles" and the crisis of overproduction in the PRC have finally become apparent. "On the stock markets from the very beginning of the year there is a real slaughter," - the newspaper writes.

Портал “To lead. Economy" With reference to the British magazine “The Economist” points out: the danger of a new crisis is that in case of a deterioration of the situation, the Chinese authorities may prefer the path of currency devaluation. The yuan is depreciating now, and investors are reacting painfully to this.

The real shock will happen with a sharp collapse of the yuan. If the Celestial Empire goes for such a devaluation, then Asian countries will have to do the same: they cannot afford to lose competitiveness. But after all, Asian companies have dollar loans (by the way, like Russian ones).

Professor of the Department of International Finance at MGIMO, Doctor of Economic Sciences Valentin Katasonov believes that the problems of the world economy that were accumulated earlier will spill out in 2016.

"The epicenter of the second wave of the global crisis of 2008-2009 can be either the United States, which was already the epicenter of the first wave, either Europe or China," he said "The Parliamentary Newspaper". - In the first days of the year, the indices of the US and Chinese stock markets collapsed almost simultaneously, and now they are arguing where the beginning was and where the continuation was. The dispute is useless, as these are segments of a single global financial market. And the bottom line is that the height of the 2016 debt pyramid of the year already exceeds its height 2007 in the pre-crisis year. China’s cumulative debt is 280% of GDP, and it has already outpaced US debt by 2007 a year. ”

The second wave will come to Europe and the United States, but it will hit the periphery of world capitalism especially, including Russia. “I would not like to say that the situation is hopelessly bad for us,” says Katasonov. “But our financial authorities have not put up the necessary protective barriers to cross-border capital flows and do not even stutter on this. This commitment to the ideas of boundless economic liberalism is the saddest thing. As long as the outflow of capital continues, the ruble will fall with all the ensuing consequences. It is time for our Central Bank to set these restrictions and start issuing rubles for national production, for the release of national goods. It’s time to stop doing astrology on the subject of oil prices, and doing economics is an absolutely concrete thing. ”

At the same time, “economic growth,” as he now understands, Katasonov regards as “a pyramid that benefits world usurers.”

“For the sake of this economic growth, supported by a debt credit and emission pyramid, natural resources are milled, people are milled, the environment is polluted,” the expert notes. - This is an economy of absurdity, this is a meaningless, faulty in its basis economy. Real economic growth is the satisfaction of people's real needs, and not the creation and satisfaction of a demand for something that is not really necessary and even harmful. ”

So, to add in conclusion, the elementary capitalist overproduction and glut, along with the desire of market players, primarily China, to preserve market share at any price, will lead to a new crisis. GDP growth with this approach becomes an absurd concept, which the state prays for. Infinite growth is impossible just as a perpetual motion machine is impossible. And the state is here hostage to its own policy: when the demand for goods falls, production will fall, unemployment will start to rise, the standard of living of the population will fall. And in this situation, the Chinese government will have a particularly hard time: in its export-oriented country, domestic demand is also extremely low due to the total poverty of the population.

Observed and commented on Oleg Chuvakin
- especially for topwar.ru
Ctrl Enter
Noticed oshЫbku Highlight text and press. Ctrl + Enter
We are
Results of the week. "Guys let's be friends!"Situational analysis of the death of the MH17 flight (Malaysian Boeing 777), made on the basis of engineering analysis from 15.08.2014
Military Reviewin Yandex News
Military Reviewin Google News
41 comment
Information
Dear reader, to leave comments on the publication, you must to register.