The lifting of sanctions from Iran: oil consequences

January 20 2016
44
On the night of January 17, US Secretary of State John Kerry and head of European diplomacy Federica Mogherini announced the lifting of sanctions against Iran. The removal of restrictive measures was preceded by a statement by the IAEA Director General, Yukio Amana, on Iran’s fulfillment of its obligations to limit the nuclear program. The main result of the lifting of sanctions: the US and the EU have allowed Iran to resume the supply of "black gold" in full, without restrictions. 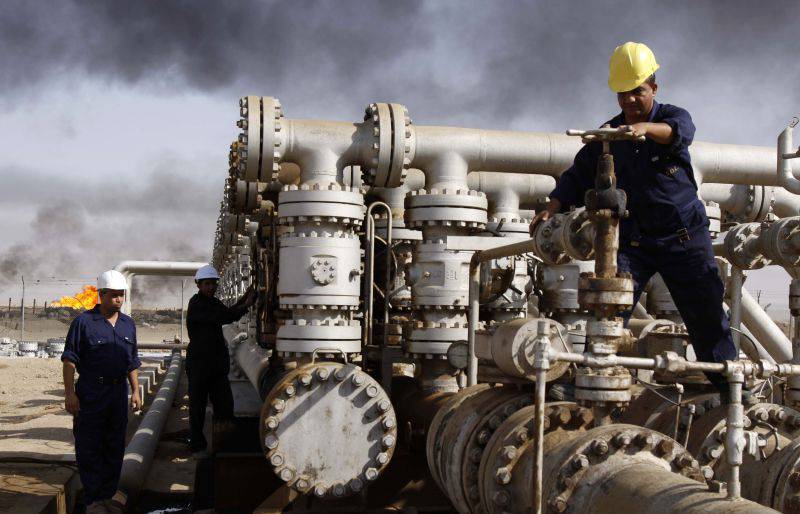 Meanwhile, financial analysts do not expect a sharp drop in oil prices, associated precisely with the lifting of sanctions against Iran. Politicians also do not expect this. John Kerry remindedthat Iran needs to invest about 500 billion dollars in it to restore the oil industry.

And this is a very big amount for Iran.

According to the US Secretary of State, the fears of opponents of lifting the sanctions are largely exaggerated. Other journalists claim that Tehran will receive from 100 to 150 billion dollars after the "defrost", but the US foreign minister categorically disagrees. He noted that Iran’s frozen assets are limited to 55 billions. 150 billion dollars - the number of "fictional".

"They will receive about 55 billion dollars," - quotes Kerry MIGnews.com. Moreover, this money will not be issued immediately, but during a “certain” period of time. The duration of his Kerry did not name.

It is also curious that last Sunday the United States ... imposed new sanctions against the IRI related to its missile program. Therefore, the Iranians themselves do not believe in any rapid changes after the removal of restrictive measures.

"The lifting of sanctions is a great success of the government," said the TV channel. "Euronews" Iranian manager Saeed Yavari. - I can congratulate him. But I think there should be no quick changes. The effect will not appear immediately. ”

The main result of the lifting of sanctions was reduced world oil prices, the channel said. Tehran promised to sell 500 per thousand barrels per day.

However, let us add on our own, if you look at the market data, it will become clear: no sharp fall in prices has occurred. Moreover, Iran is not able to quickly enter the world market. This is what John Kerry said; Iranian Ambassador to Russia Mehdi Sanai also said the same thing - in other words.

TASS quotes a blog in the LiveJournal of Mehdi Sanai: “The lifting of sanctions against Iran will not have a significant impact on reducing the cost of oil. The price of oil has so far declined to a large extent under the influence of other factors. ”

So far, the lifting of sanctions from Iran has visibly hit only the Saudis and their regional allies.

The January 17 stock index of the Saudi stock exchange “Tadawul” has fallen sharply. According to the website investing.com, which leads RBCThe main indicator of this exchange, the All-Share Index, lost almost 300 points when opening trading.

"On the stock market of Saudi Arabia, the collapse at a certain point exceeded 7%," "MK". - A similar situation exists in Kuwait and Qatar. The authorities of the latter even had to raise petrol prices by 30-35%. ”

Bloomberg believes that oil has fallen in price against the background of the lifting of sanctions against Iran, as well as fears of an increase in the overabundance of oil reserves in the world. "Additional oil supplies by Iran have an impact on further price cuts, perhaps [prices will fall] to $ 25 per barrel," Gordon Kwan, an analyst at Hong Kong-based Nomura Holdings Inc., quotes RBC.

Other experts are echoing Kwan.

The lifting of sanctions from Iran will reinforce the oversupply in the oil market, said former Assistant Secretary of Energy, Executive Director of the Energy Initiative Group at Rise University, Charles McConnell.

"The output of Iran will strengthen the global oversupply of oil," quotes the expert RIA News". - Saudi Arabia has already announced that it is not going to lose market share. And Middle Eastern suppliers have the lowest operating costs in the world and can afford to increase stocks. ”

In the short term, the movement in the oil market will be downward, says Ole Hansen from Saxo Bank. His opinion leads RIA News".

“Hedge funds still have a record speculative short position in oil futures, and players who want to fix acceptable (low) prices for the future continue to replenish their ranks,” the expert said.

Analysts also point out that large oil tankers with a capacity of two million barrels each are almost completely filled with Iranian oil and are ready for shipment. Of course, in the short term, these tankers will serve as an additional source of pressure on oil prices.

We seem to have abandoned even the forecasts. At the very least, the government is talking about "poor predictability."

"Oil prices remain the same, their further dynamics are also poorly predictable, - quotes RIA News" Prime Minister Dmitry Medvedev. “Moreover, as you know, Iran’s sanctions have been lifted, and oil continued to fall today. Accordingly, great risks remain for replenishing the budget and meeting budget commitments. ” Medvedev spoke about this at a meeting on the performance of the budget for 2016 year.

“Therefore, additional measures are necessary both in terms of replenishing the budget revenues, and in terms of more vigorous spending cuts, which we discussed at a meeting on Friday,” Medvedev added.

This is not surprising, let us add: the raw material economy of Russia depends greatly on the world conjuncture. Oil is becoming cheaper - the budget is being squandered, the ruble rate is being devoured by inflation, citizens are rapidly getting poorer. With cheap oil, our government is becoming like a meeting of confused people who have nothing left to do but say about “poor predictability” and “big risks to replenish the budget”.

"Already, few people doubt, - writes "Moscow Komsomol"- that oil will fall in price to $ 20, if not lower. Experts predict that our currency will then fall to 100 rubles per dollar. As predicted by the reputable investment bank Goldman Sachs, even with a dollar in 90 rubles, the Russian economy will face a severe crisis: the industry will stop, inflation will accelerate at an incredible speed, unemployment will intensify, as well as falling consumer demand. On Monday, January 18, the official price of the dollar reached the 78,67 ruble (+ 2,1 ruble), the euro - to the 85,62 ruble (+ 2,32 ruble). "

Senior analyst at Rye, Man & Gor Securities Sergey Pigarev said Gazeta.ruthat a significant increase in supply from Iran has already been taken into account in oil prices. And yet, in the short term, pressure on quotes may continue, as accumulated stocks of Iran may be thrown onto the market. The excess supply of oil over the demand on the world market already amounts to about 2 million barrels per day.

“Already in the near future we will see the beginning of the“ onset ”of raw materials from Iran to the European market, where Russian oil will have to compete with Iranian oil, - notes Pigarev. - The price war for Europe may cause significant volatility of quotations of "black gold".

We’ll have to wait for nothing positive, we’ll add, from Iran’s access to the western oil market. It should also be understood that Iran will have to be dumped in the market in order to attract buyers to its goods. This will have an additional impact on oil prices.

Russian Finance Minister Anton Siluanov, participating in the program "Vesti on Saturday with Sergey Brilev", said that the reserve fund and the National Welfare Fund can be "eaten" in 2016 year. Quote by TASS:

“For the current year we can“ eat ”reserves, if we do not take other measures. The reserve fund and that part of the National Welfare Fund that is not invested in infrastructure projects, yes. ”

According to Siluanov, with average annual oil prices at the level of 25 dollars per barrel, the Russian budget will not receive more than 2016 trillion rubles in 3 in the year. rubles of revenues: “The budget is based on $ 50 per barrel. Therefore, with a difference of two times ($ 25 per barrel) I want to say that for income this difference is approximately 3 with more than a trillion rubles. If we imagine that the expenditure budget is about 16 trillion rubles, then reducing revenues by 3 trillion is serious. ”

Meanwhile, financial experts are talking not only about 25 dollars per barrel, but also about 20. In the short term, there are no factors that could prevent this, said Darya Zhelannova, deputy director of Alpari’s analytical department, whose opinion is provided by the business newspaper. "Sight".

The publication notes that the head of the Ministry of Energy has already recommended that companies do stress tests on the price of 25-30 dollars per barrel.

However, in the long run, low oil prices will lead to a significant reduction in production, and this will provoke a rebound in oil prices, says the same Zhelannova. She is echoed by other experts.

“The fall in prices below 25 dollars will make unprofitable mining more than just shale companies,” Valery Polkhovsky of Forex Club told the publication. - First of all, here it is possible to refer Canada with its oil extracted from Alberta’s tar sands. And that's about 2,8 million barrels per day. "

And this is where Iran enters the game, betting on a lower price.

The low cost of production will allow Iran to crowd out other players and take the market share due, says V. Polkhovsky.

However, can Iran? Is this country able to realize its ambitious plans to increase oil exports?

Iranians are optimistic. According to IRNA, referring to the Iranian Ministry of Oil, Iran plans to increase crude oil exports to two million barrels per day by the autumn of 2016.

"We are confident that soon after the lifting of the sanctions we will be able to increase the daily supply of oil by 500 thousands of barrels, and after six to seven months we will increase exports by a million," the Vzglyad newspaper reports to the Minister of Oil Bijan Namdar Zangane.

In the coming months, we should not expect an increase in oil prices. This is due to a significant excess of demand over supply and the turn of the new global economic crisis that began last year with the collapse of the Chinese stock market. An additional factor that will affect oil prices in the near future will be access to the western oil markets of Iran, from which sanctions have recently been lifted. In order to return the lost market share, Iran will be dumping - at the low cost of producing “black gold” it can afford it. In the short term, the price of oil may fall to 25 and even to 20 dollars per barrel, experts say. According to the Minister of Finance of the Russian Federation, Anton Siluanov, with average annual oil prices at the level of 25 dollars per barrel, the budget of the Russian Federation will not receive more than 2016 trillion in 3 year. rubles.

Observed and commented on Oleg Chuvakin
- especially for topwar.ru
Ctrl Enter
Noticed oshЫbku Highlight text and press. Ctrl + Enter
We are
Who benefits from the lifting of sanctions on Iran?Projection of force
44 comments
Information
Dear reader, to leave comments on the publication, you must to register.