Effective manager and his cutter

January 19 2016
99
About Russian education and the Russian economy - together ... It so happened that the beginning of 2016 of the year was rich in events directly or indirectly related to the educational system, which in fact is one of the main components of the issue of Russia's national security. It is difficult to imagine a state that, as its primary goal, set a goal to develop a country against the background of protecting national interests, but would not pay due attention to the educational environment. It is even more difficult to imagine a positive future for the state if it focuses on education only when it comes to the next plan to conduct a destructive experiment on the educational environment, turning the Russian school itself (in the broad sense of the word) into a laboratory mouse with all the consequences .


In general, it just so happened that when officials suddenly embraced a creative impulse, during which they are going to “take up the education system,” people employed in this system most often clutch their hearts with a shuffle: if only not for a new stage of reform. .

However, it also happens that in a number of cases initiatives are voiced that I would like to treat with a positive one. So in the course of the “Gaidar Forum”, about which the material was already published on our website, one of the participants of the discussion, namely the Chairman of the Board of Sberbank of Russia, German Gref, the idea that attracted attention was voiced. Gref, who, frankly, is difficult to attribute to the ideologues of heightened business responsibility before the interests of the state and the population, suddenly said that the decision of the Russian government to cut spending on 10% "in proportion to all spheres due to the economic crisis" may cause irreparable hit. According to Gref, if funds are withdrawn from the expenditure side of the educational budget, too, such withdrawals can ultimately lead to a complete degradation of the education system in the country, which (the education system) should always remain a priority in any self-respecting state. According to the head of the Sberbank, reducing state funding of the educational sector, Russia is depriving itself of innovative perspectives, technological development and, as a result, competitiveness in the world market, and therefore finances allocated for education cannot be cut.

Apparently, after such a statement, and even from Gref (namely, from Gref, frankly speaking, nothing like this was expected ...), even to the Minister of Finance Siluanov, who offered to cut budget expenditures "proportionally", it became uncomfortable ... 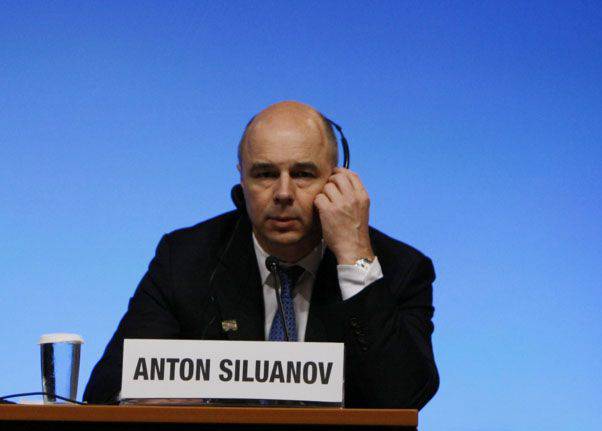 Mr. Siluanov, who was honored by correspondence criticism even from a colleague on the liberal team - from Gref, in general became, if one may say so, the anti-hero of the past week. The fact is that in addition to announcing plans to cut state budget spending, including cutting spending on education, the head of the Russian Ministry of Finance announced that Russia was “close to repeating the 1998-1999 crisis.” After these words, even Dmitry Medvedev had to wake up, saying that Siluanov, they say, bends, and there are no risks for the Russian economy capable of plunging the country into default and the total fall in industrial production of the 1998 sample of the year is not present. That’s what the chairman of the Russian government, who only said a month ago, said that the crisis, you see, was left behind ... Then Dmitry Medvedev had to comment on the words of President Vladimir Putin, who said that it was not about the passing of the crisis, but about “passing peak of crisis ".

The statements of the head of the Ministry of Finance of the Russian Federation were noted in the OP of the Russian Federation. Having singled out for himself a selection of a number of the last (at the moment) statements by Mr. Siluanov, representatives of the Public Chamber of Russia decided that the minister was obviously “tired” and that it was time for the minister to declare: “I am leaving” ...

In the newspaper "News" It was reported that the first deputy chairman of the commission on social policy of the RF OP Georgy Fedorov January 17 posted on the site “Russian Public Initiative” a petition calling for the resignation of the current Minister of Finance for his words “about the possibility of repeating the situation of 1998-1999 without reducing budget expenditures”.

But unless the reason for the minister’s resignation to the federal authorities is the fact that the minister actually signs off the inability to create an effective mechanism for developing the economy and is ready to cut everything, even to finance the program of building preschool institutions, activities of general educational and special educational institutions, scientific work in universities ... It may turn out that these promises of the Minister of Finance to his colleagues in the federal authorities will not seem anything reprehensible again, and financing -strategic importance for the country's industries (namely - education), too, will go under the knife. The Minister will remain in his warm place, with a non-optimized salary, with a full package of “all-inclusive”, which means we should expect a big cut-off - where 10% is today, there and everything is 50% tomorrow. And despite the fact that the level of efficiency in the use of funds in a number of programs remains, to put it mildly, at a low level. And while the ministry of finance is thinking how to cut the funding of education in Russia again, somewhere quietly, excuse me, withdraw another official from the federal program who was not caught (or caught, but released “due to lack of crime) another official who decided that the dacha in Courchevel ( decorated on a mother-in-law) - a good family airbag in a crisis ... What kind of education is there ... To slaves to study is not supposed to ...

Ctrl Enter
Noticed oshЫbku Highlight text and press. Ctrl + Enter
We are
Results of the week. "In the Greek Hall, in the Greek Hall ... the mouse is white!"Situational analysis of the death of the MH17 flight (Malaysian Boeing 777), made on the basis of engineering analysis from 15.08.2014
Military Reviewin Yandex News
Military Reviewin Google News
99 comments
Information
Dear reader, to leave comments on the publication, you must to register.