January 18 2016
70
Lawyers for businessman Valery Puzikov, Serdyukov’s ex-defense minister’s son-in-law, criticized the charge against the defendant and suggested that military investigators stop the criminal case without waiting for the court. If the court does take place, then Serdyukov may be called as a witness to his meeting, writes Kommersant. 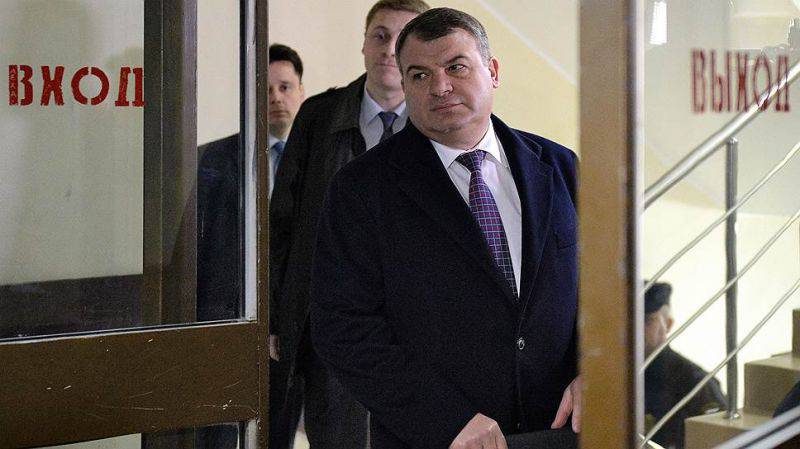 Puzikov is accused of particularly large-scale thefts (part 4 Art. 160 of the Criminal Code of the Russian Federation) of the FSUE "St. Petersburg Engineering and Construction Center" money, which he previously directed.

“According to the first of the accusations, at the end of 2009, the general director of the Federal State Unitary Enterprise Puzikov” with mercenary motives for the purpose of embezzlement using his official position and family ties, “lobbied the conclusion of contracts that were obviously unfavorable for his organization and the Ministry of Defense. According to his order, FSUE rented six expensive foreign cars from the established by the spouse of the general director Galina Puzikova OOO Tekhtsentr and OOO Avtoservis-MM, and at the same time concluded a state contract for road maintenance of the Defense Ministry’s leadership, ”Kommersant writes with reference to the case file.

In other words, the federal state unitary enterprise became an intermediary between the military department and the merchants.

The cars were leased to the 2,5 of the year. “The Ministry of Defense regularly transferred money to FSUE, and that, respectively, to business firms of Galina Puzikova. A total of 4,8 million rubles was paid to TechCenter, and 3,2 million rubles was paid to Car Service. At the same time, as the investigators believe, no one used transport - SUVs and limousines did not leave the guarded parking lot on Cheliyev Street in St. Petersburg, owned by the same wife of the main defendant. ”

A lawyer in his petition to the investigation refutes the assumption of idle machines. According to him, for example, "Hummer and both Toyota Land Cruiser were used by the military for testing when choosing the type of SUV for the army command."

“As a result, the“ American ”was rejected, and the“ Japanese ”, on the contrary, successfully passed the tests - they were procured by the Ministry of Defense in droves. German cars were used by special services to accompany the country's top officials on trips to the North Caucasus, etc., ”the newspaper explains.

“Some cars really could be in reserve for some time, while others were operated for wear,” a source close to the federal state unitary enterprise explained to Kommersant. “That was the point of a long-term lease.”

According to the lawyer, there are no data in the case that indicate Puzikov’s mercenary motive at the conclusion of transport transactions, as well as his enrichment during their implementation.

The second episode is associated with the transfer of salaries to non-existent employees - the secretary-assistant, manager and nurse.

“The roles of dead souls in this scheme, according to the investigation, were assigned to relatives of FSUE directors, whom Valery Puzikov and his alleged accomplices used in the dark: the nominees“ were not aware of the unlawful nature of using their personal data. ” Thus, the former heads of the Federal State Unitary Enterprise, as the investigation believes, stole about 4 million rubles by embezzlement, ”the newspaper writes.

In this episode, according to the lawyer, it is not about embezzlement, but about creating an “illegal reserve fund”, the money from which was not stolen, but was used for the needs of the enterprise - “payment for the repair of premises, car washing and other one-off and occasional needs”.

In addition, the tax audit “did not detect a shortage of money on the FSUE balance sheet”. Therefore, “the salary episode can be considered as an attempt to evade taxes from the organization (art. 199 of the Criminal Code of the Russian Federation), but not as a theft,” the lawyer said.

Taking into account all the circumstances, he suggests that investigators “stop the prosecution of Valery Puzikov” in both episodes.

The investigation is unlikely to be led by the defense, and the case of the theft of a total of 12-million rubles will most likely go to court. In this case, Anatoly Serdyukov may become one of the key witnesses for the defense.

“The official at least has already made it clear that, like lawyers, he sees no grounds for prosecuting his relative and will fight for his freedom,” notes “Kommersant” and recalls that Serdyukov’s testimony “played an important role in the Presnensky District Court, who considered the case of the former head of the defense department’s property relations department Yevgenia Vasilyeva and her accomplices: the defendants, having received convictions, were nevertheless acquitted of many episodes and most of them were already parole y.