January 19 2016
1
Recently, on the "Military Review" were published the beginning and continuation stories childhood of a resident of the village of Volovo, Lipetsk region, Ignat Vasilyevich Komarichev. True, in those years he lived in the village of Rusanovka Dolgorukovsky district. Let me remind you that in the first part of the story of Ignat Vasilyevich, it was about saving his brother the Red Army man. And in the second, the adoptive daughter Kate appeared in the Komarichvy family, later becoming the wife of his grandfather Ignat. Now - the end of the story. It is far from complete, since, unfortunately, I did not write down everything, but nevertheless ...


Beginning of the winter 1941 of the year. Ignatka rode on the ice. The ice slipped badly under my feet, and the heavy felt boots that the mother took out of the chest were not fit. But Ignatka was a joy to ride.

When winter set free the prickly wind, Ignatka lay on the ice with his back. And slid, pushing with his feet. A friend of Petka said that a swan is swimming in this way if he is wounded in the neck. Ignatka didn’t really believe Petka, and he didn’t dream of becoming a swan. He imagined that he was delivering an important package to headquarters. And around, wherever you look, the Germans - the whole army! Climbed from everywhere, like cockroaches from the cracks - and on him. But Ignatka is not a coward. He lies on his back and crawls face up so that the Fritz will not be taken by surprise. And in his hand squeezes the machine, ready to put steel peas into the enemy. Automatic replaced curve spruce stick. But this is nothing that curve. The main thing - to shoot well.

The smooth ice space under Ignatka’s back slowly grew. And the more diligently he crawled to the headquarters, paving his way to him. The snow yielded, pushing the boundaries of a large frozen puddle. On the edges of its ice slid badly, had to help yourself with your elbows and rested with felt boots. But to disrupt the task of partisans Ignatka did not allow conscience.

But then the young partisan was tired and got up ... And suddenly he saw under the snow scattered over the ice something gray, tightly frozen into the ground. He began to peck on the ice with his felt boot - in vain. An incomprehensible, but something familiar to Ignatka object as if rooted to the ground, bound by the mighty force of frozen water. Once again, that was strength, Ignatka hit on the ice buildup, then again and again. Nothing came of it. The submachine gun broke at the very first blow - he would only have to beat the frictions he had invented!

Ignatka began to sweat, his hat now and then slipped into his eyes, his legs dangling in heavy felt boots when he pounded on the ground with them. Meanwhile, the muddy crust slowly became more and more transparent - now it became clear that there, in heartless ice chains, was a piece of paper. Ignatka lay down on his stomach and began to breathe a letter. But the frosty air was stronger. He intercepted warm breath, interrupted him with his own, strong and burning. Ignatka began to cry.
How is this a package of extreme importance? And somewhere far away, and maybe even in Moscow, they are waiting - will not wait for the news of the scouts? And the news is there, under my feet, and Ignatka can do nothing. Tears dripped onto the ice crust. But they could not help Ignatke - there were very few of them.

And then Ignatka remembered: he had in his pocket a big rusty nail, which he slowly pulled from the wall from his mother. A necessary thing, judged then Ignatka, is it not enough, why is it useful? And it came in handy.

Ignatka ran his hand into his pocket. The nail lay in the same place and did not bite. He understood that now will serve for a just cause. And he began zealously gnawing the ice prison, without creaking or capricious. Only once did he jump awkwardly, scratching Ignatka’s hand.

Now there are two of them - a boy and a nail.

The power of winter retreated slowly, not immediately. She was one of those who stand to the last. And finally, she snapped: breaking and crumbling the last pieces of ice, Ignatka did not calculate and stuck a nail in his hand. He sobbed from the pain, but then, overjoyed by the luck, grabbed the document and, stumbling from fatigue, ran home.

In the warmth, the paper quickly thawed. Ignatka carefully unwrapped her, wishing that she started going to school only a month ago - as promised by the teacher Anna Pavlovna, classes began in the winter. Ignatka managed to learn the letters, but he put them in words badly.

But special literacy, in order to make out what the essence of the document was, was not required. There was a funeral in his hands - Ignatka saw such a thing only once, but he remembered well. Recently, the postman Aunt Mila brought just such a piece of paper to the house to Baba Klashe. Ignatka was sitting at her time, gobbling up a sweat swede - what kind of swede was it, honey! Baba Klasha, seeing the piece of paper, screamed in a bad voice, screamed, startling Ignatka. The postman grabbed her hands, and together they wept. And Ignatka began to cry, but from fear. And my mother later explained to him that such pieces of paper are worn by people when someone dies in their family. At Baba Klasi, the eldest son, curly Arkasha, was killed. And then Ignatka also roared in a voice. Arkasha made him kites. Now they lie in the barn, waiting for skilled hands. And the hands are in the ground. And they won't do anything else. 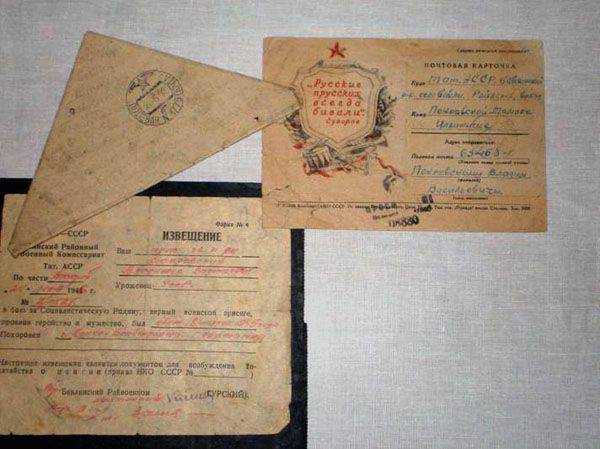 So, and now in the hands of Ignatka someone's big trouble, written on a piece of paper. Such a little shred. He began to disassemble the letters. He disassembled with great difficulty, because there were printed and handwritten. From the printed, he realized that the fighter had died the death of the brave under some village. And part of the written folded name Savin. Folded - and was terrified. Savin! The younger son of Baba Klasi, Kolya! Ignatka darted around the hut, huddled like a pigeon in a cage. Hide the funeral, break, burn, sweep the wind! Let Kolya Savinov live!

Ignatka ran up to the stove, opened the flap and, suffocating smoke, coughing, threw the paper in there. She did not immediately. I let a trickle of steam - the latest news about the fate of Nicholas.

Baba Klashe Ignatka said nothing. She died about two years before Victory, without waiting for either a son or a letter from him.

And Ignatka believed that, since the funeral was gone, Nicholas was miraculously alive. But he never returned from the war.

The question remains: how could the burial fall into that frozen deep puddle? The postman Rusanovka, a woman whom Ignat Vasilyevich remembered as Aunt Mila, must have taken a very responsible attitude towards his work. But grandfather Ignat thought that she lost her funeral in the dark, in the evening, as she carried the mail closer to the night, and during the day she helped the collective farm. Well, so be it. But after all Mila probably saw this document, she put it in her bag! And yet she said nothing to Nicholas's mother. There is no answer to this question.

It remains to add one more fact. In December 1941, the Germans occupied Rusanovka. The headquarters is located just in the hut Komarichevs. At that time, Ignatka and Kate were sent by the mother to the neighbors: she was very afraid that drunken fascists (and they drank almost every evening) would mock the children. The occupation did not last long, and every day there were rumors in the village that the Red Army was about to launch an offensive operation. And on the night before Ignatkin’s attack, the mother herself burned her hut. She explained her action to her son much later: having learned what day the offensive would begin and that it would be long before dawn, she thought: it would be good for our help to somehow, in the dark nothing could be seen. They knew in the village that the partisans were not asleep. And the mother found a way to convey to them the news: as they see that a hut is burning near the outskirts of the village, let them know that this headquarters is on fire ... 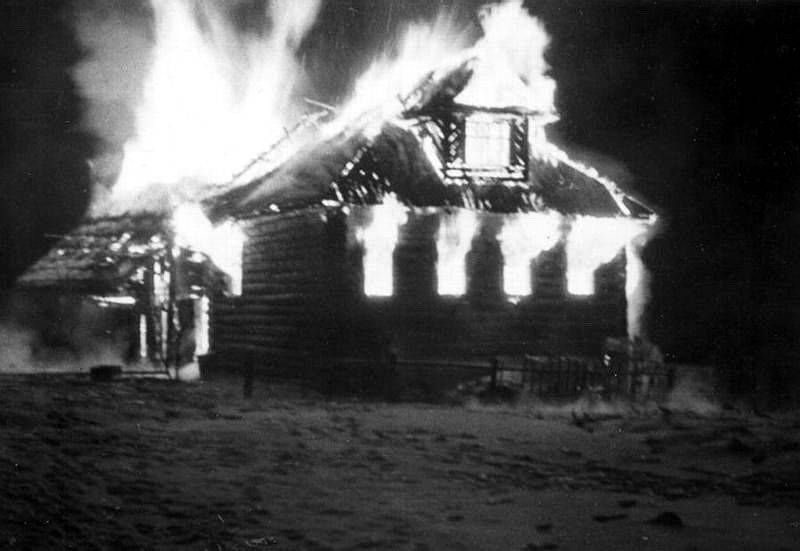 For a long time, the Komarichev family lived with their neighbors. And then they built a new house. Ignat and Katya got married and moved to Volovo - there was more work here, and Katya also had relatives in this village.

Ignat Vasilievich worked as a tractor driver. In the spring, I almost always received the honor of the first furrow — as the best worker.