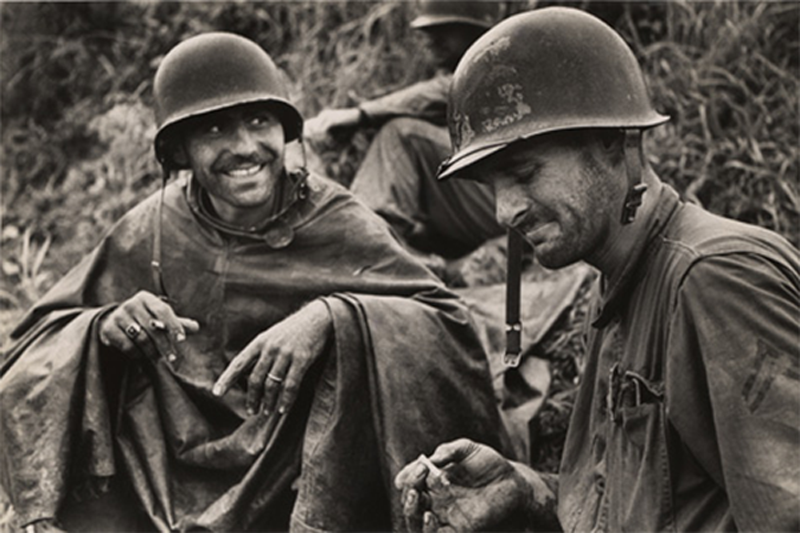 "When it seemed that the machine gunner [Corporal Leonard Hayworth] had lost all hope, an experienced colleague with smoked cheekbones and a white-toothed smile crawled up to him ... sitting shoulder to shoulder with a young colleague, he quietly told him how they still manage to keep the defense ... Chumzy the veteran spoke until a faint smile appeared on the corporal’s face. Tears still flowed and left marks on his dirty face under the helmet, where rain could not wash them away, but the old marine seemed not to notice. [Korea, September 1950 of the Year] from the book "This is War!", P. 26


Few people have lived such a long, diverse, and interesting life as David Douglas Duncan. And of course, none of the photographers can boast such a long and vibrant career as this native of Missouri, who today is one of the most outstanding photojournalists of the 20 century.

Duncan was born on January 23 of 1916, and in 30 began making photo stories for newspapers. He joined the Marine Corps after Pearl Harbor, took the most unforgettable images of World War II, and 20 years later in Vietnam, documented civil unrest and wars in Europe, Africa, Asia and the Middle East, capturing the unspeakable beauty of the world, starting with the Western Ireland and ending with the deserts of South America, was friends and photographed by Picasso and Cartier-Bresson, and finally created the greatest portfolio of photographs since the Korean War. 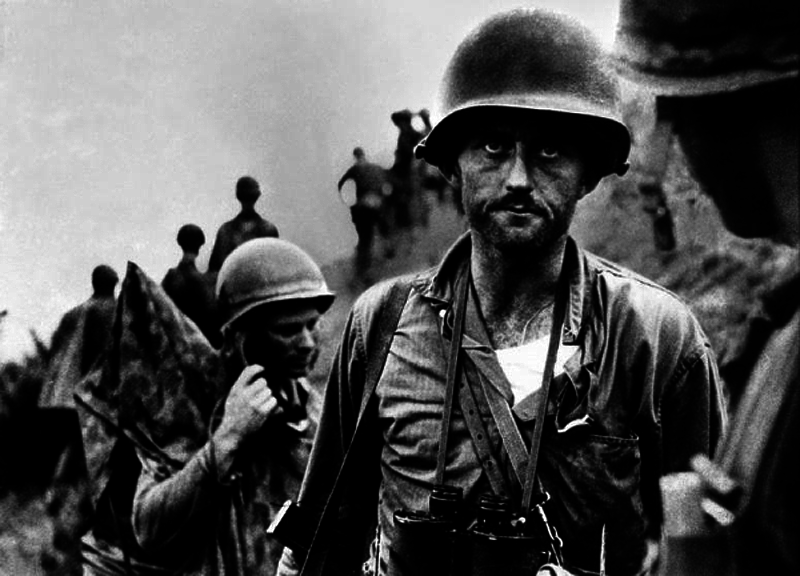 Captain of the Marine Corps Francis Fenton thought about his fate and the fate of his people after he received a report that there was almost no ammunition left in his company. 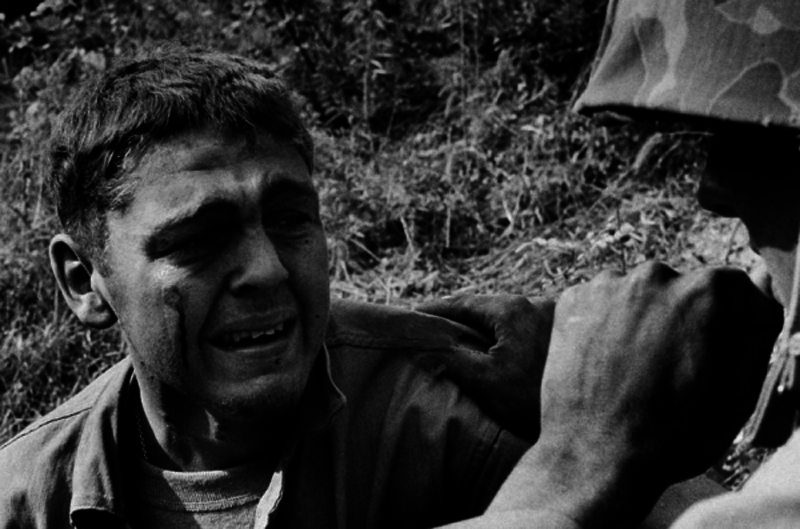 The driver, wounded after the explosion on the mine of his ambulance jeep, cries on the sidelines after he realized that his friend was dead 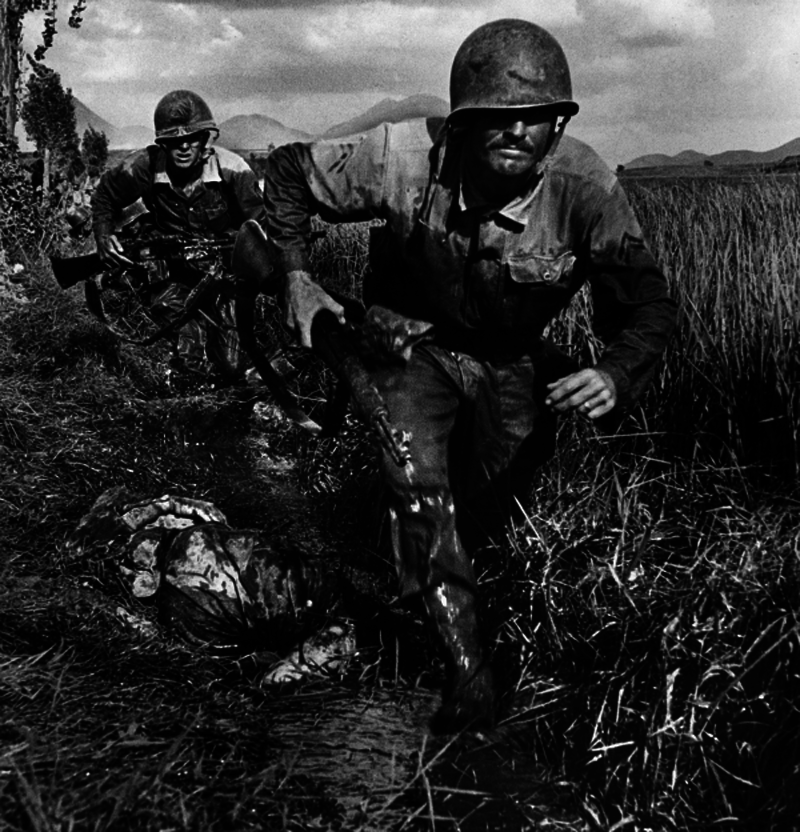 Duncan currently lives in his home in southern France. LIFE.com magazine interviewed him by phone, asking him to tell him about his memories of this conflict, about how he was able to "show what a person is experiencing when his country decides to go to war."

For example, as for his photo (the second one in the presented gallery), in which the captain of the marines was shot after another attack by North Korean troops near the Naktongan river, when the ammunition ended and reinforcements were not expected, Duncan wrote in his classic book 1951, “This is war!”: “Fenton was wet through, raindrops running down his unshaven chin, the reports were worse than the other. His exhausted infantrymen had only a few cartridges in their cartridge belts. If the Reds would start another attack, only bayonets and butts would go. ”

But there was no attack. The infantrymen held a slushy, funnel-covered, blood-irrigated hill. “Because of the rain, radio communication was impossible that day,” Duncan shared, his memories were still bright, although more than six decades had passed, “and Fenton had to shout out most of his orders, and when the shout was no longer working, he sent couriers. God, he was cool! He never lost his head. " 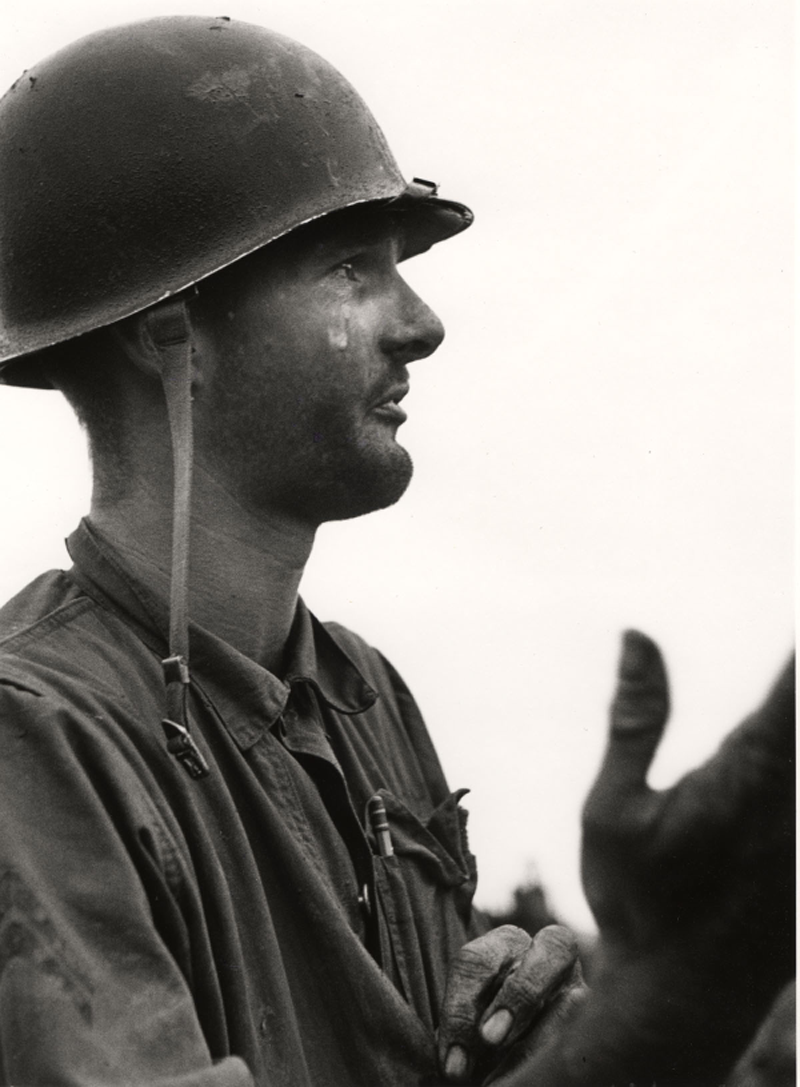 “Corporal Leonard Hayworth ... shows his extreme disappointment, because he crawled from his position only to learn that the ammunition was over. But fortunately, at the last moment, the stocks were delivered and the soldiers took their positions. ” From Duncan's book “This is war!” 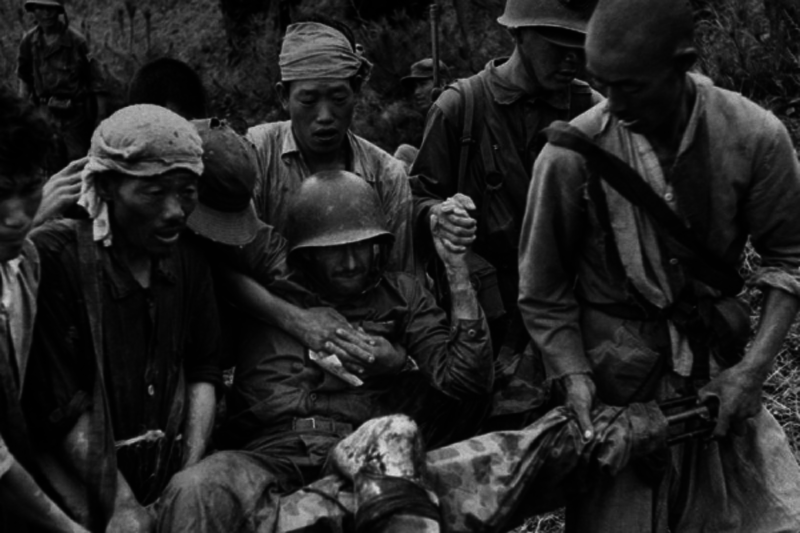 Wounded infantryman carried on a stretcher, mastered from a machine gun 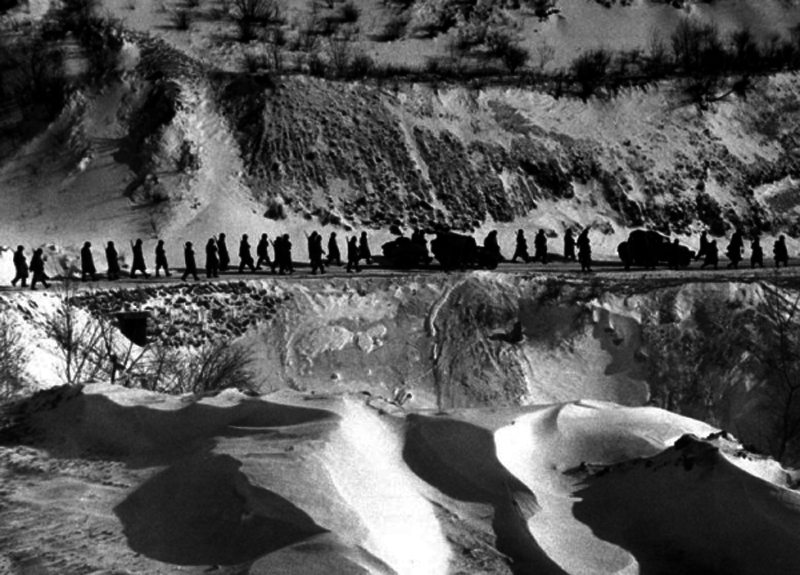 A column of US marines marching down a narrow mountain path called the Nightmare Trail, retreating after the battle of Chosinoye Reservoir, Korea, 1950 year

Other photos resurrect the same unforgettable memories in his memory. Duncan tells history some of his classic photographs in a voice that is both firmly and a little excited, excited by his own memories, the memory again brings him back to the horror and heroism he witnessed, the fact that he was there, inside the war, writing it all down.

“I telegraphed to the editors of LIFE magazine in August 1950 from Tokyo,” Duncan says, “I told them that I was going back to Korea to try to get what I called with two words a“ dumb story ”, this story is the basis of my future book . Soon after, I covered the battle near the Naktongan River, I took a photo (the third one of this gallery) of soldiers running by the dead of a dead enemy soldier, their outfit was completely saturated with mud and slurry, and God knows what else. In the end, I put this photo on the cover of my book “This is war!”, Published a year later. ” 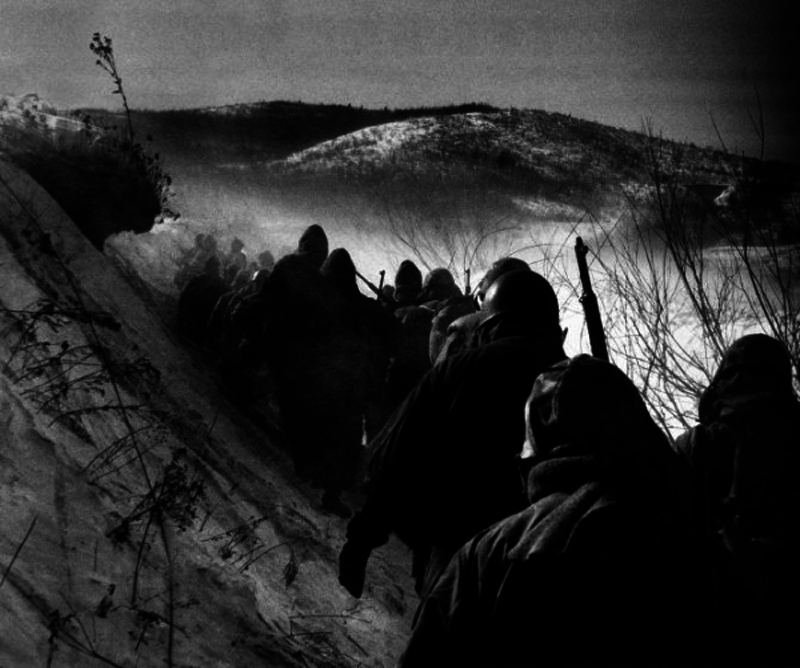 Infantrymen returning from the Chosin reservoir 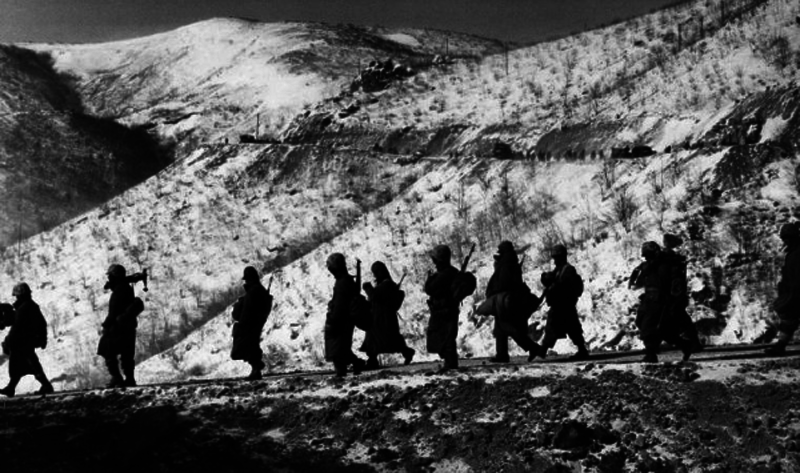 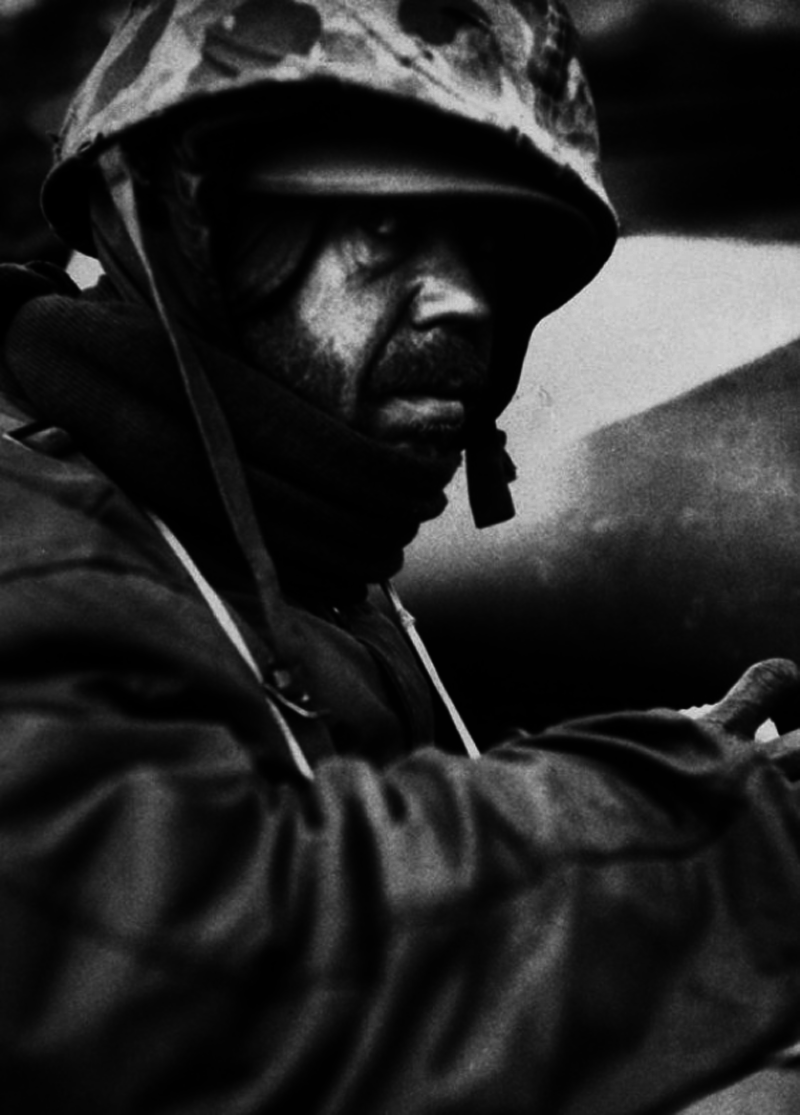 The infantryman, tired from cold weather to the bones, during the retreat from the Chosinsky reservoir, winter 1950

In the hellish summer heat and in the harsh winter frosts, Duncan walked with the marines, documenting the agonizing life they led. But such is the life and fate of all soldiers in all military conflicts around the world.

“During the retreat from the Chosinsky reservoir, it was minus the 40 degrees,” Duncan recalls one particularly awful battle of the winter of the 1950 year. - And the chilling wind! This wind blew from Manchuria and brought the temperature on sensations to 50-60 degrees below zero. It was so damn cold that my film became fragile, it just broke like a cracker. But I charged and discharged the camera under my clothes and kept some of the films there, and therefore I was able to make quite decent shots. ” (especially 7, 8 and 9 photos) 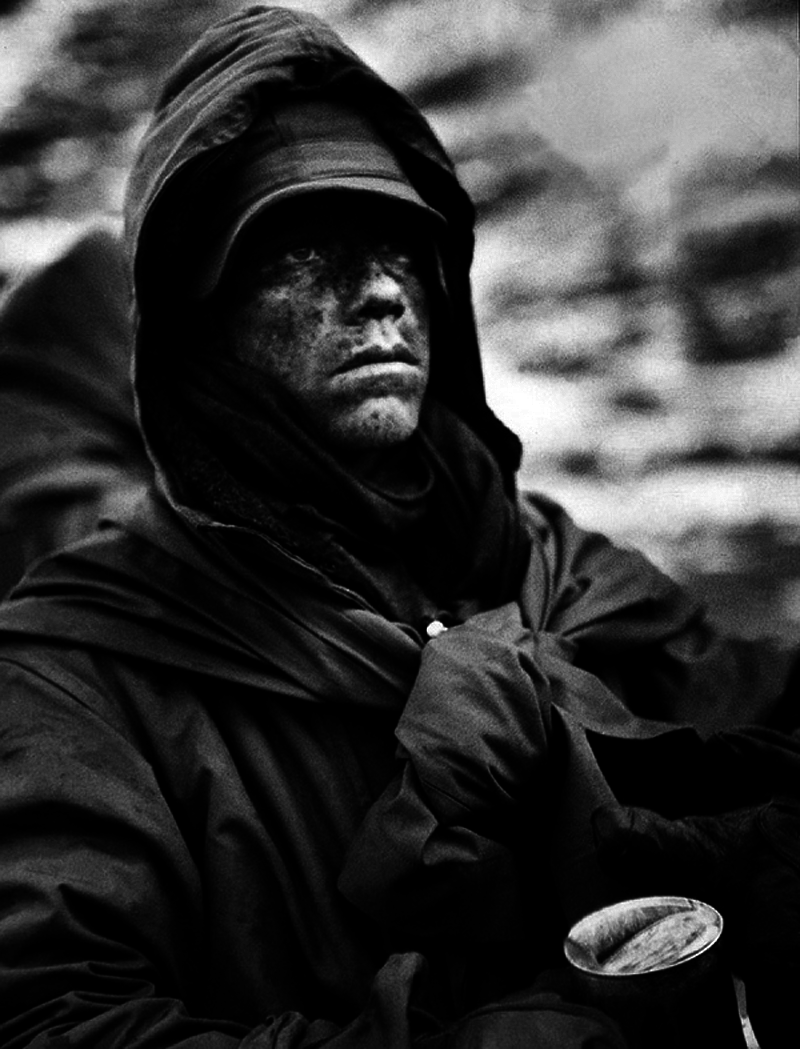 A shocked soldier grabs a jar of food. Retreat from Chosin, December 1950 of the year 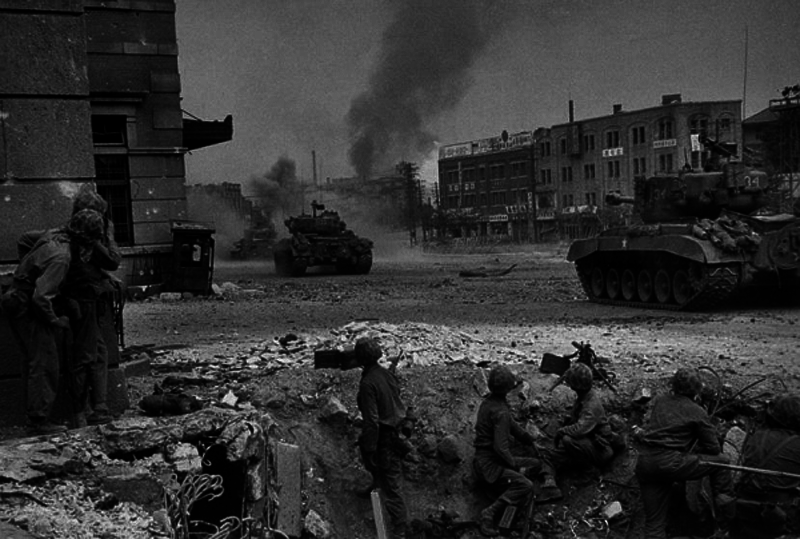 The two-week battle at Chocín, after which a UN contingent of 30000 soldiers was able to escape the Chinese soldiers surrounding 60000, is considered a decisive battle for one simple reason: superior allied forces were able to break through the enemy’s forces surrounding them, inflicting heavy casualties on them.

Remembering the unspeakable violence and constant deprivation (without heat in winter, without investment from the summer heat, constant hunger) of those years, Duncan notes the positive qualities of the Korean allies of the Americans. 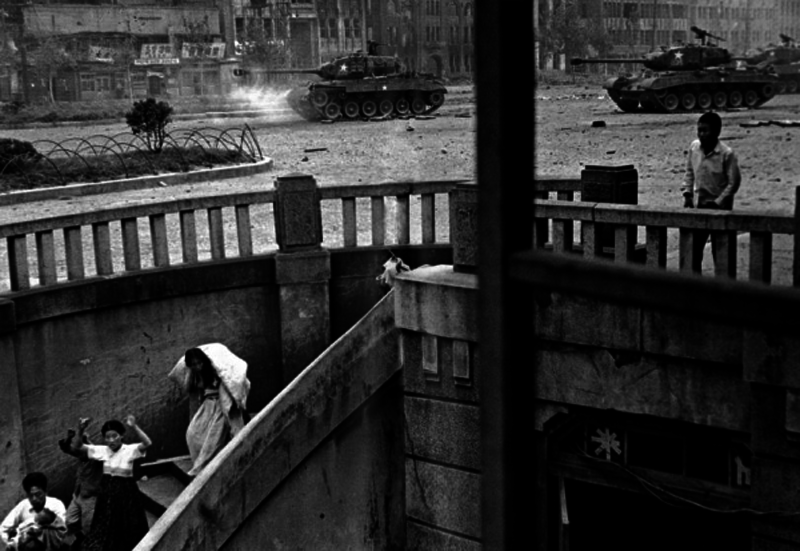 “This,” Duncan says of the photograph taken during the fighting for Seoul, “is my best picture of the ordeal of the civilian population in Korea - a family running down the stairs, a father holding a child, shooting Tanks. "These tanks fired from the North Koreans right along the street!" 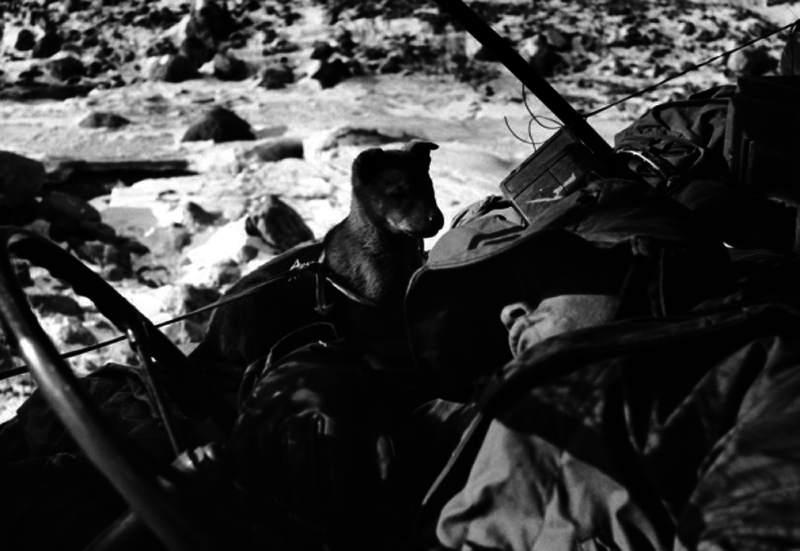 The infantryman sleeps in his jeep, while the puppy squeals plaintively at his ear. Retreat from Chosin, December 1950 of the year 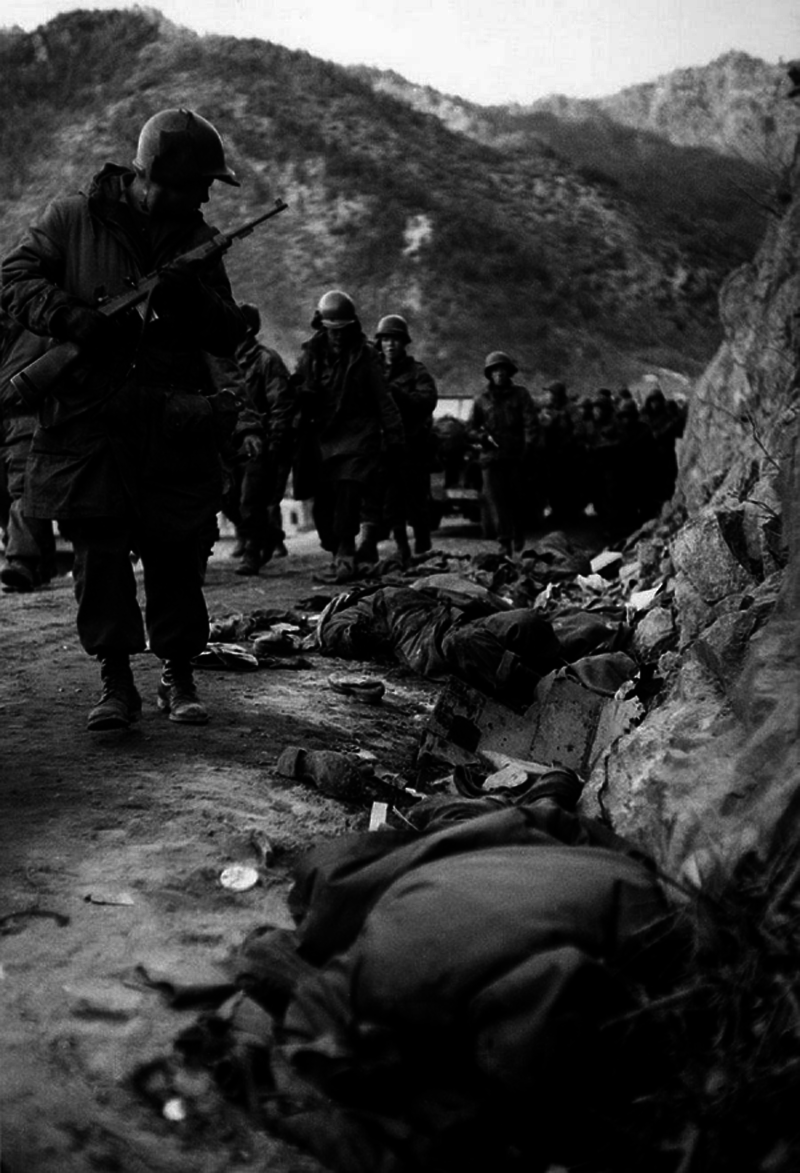 “The first thing that comes to mind right now is when you look at these pictures again,” says Duncan. - Never, not a single American soldier looked back to look at what South Koreans are doing behind their backs. Infantrymen in Korea have never been afraid of "friendly fire" or artillery shelling, which was waged by the South Koreans, our allies. A completely different picture was later in Vietnam, when we fought together with the South Vietnamese. In contrast, Koreans could be trusted. ” 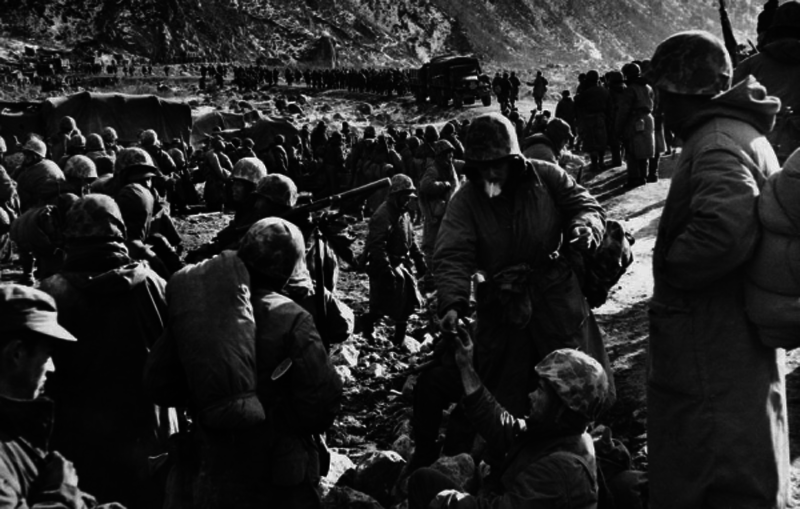 Soldiers on a halt after overcoming the “Nightmare Trail” mountain road during a retreat from the Chosinsky reservoir, December 1950 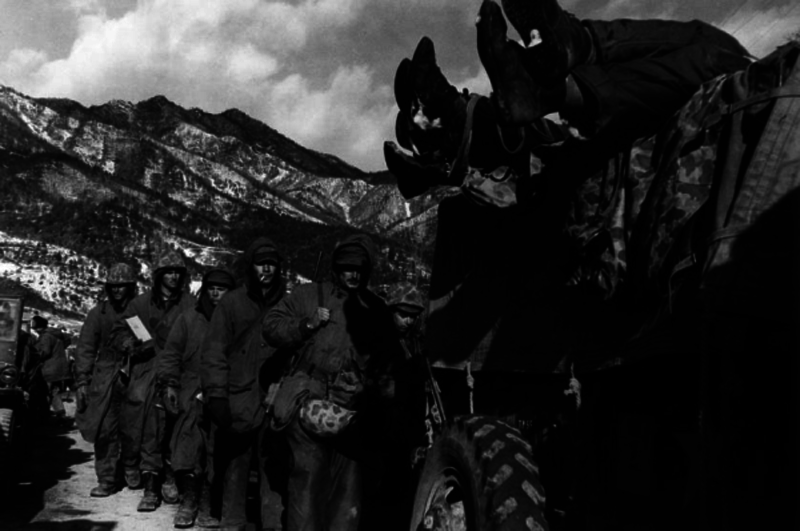 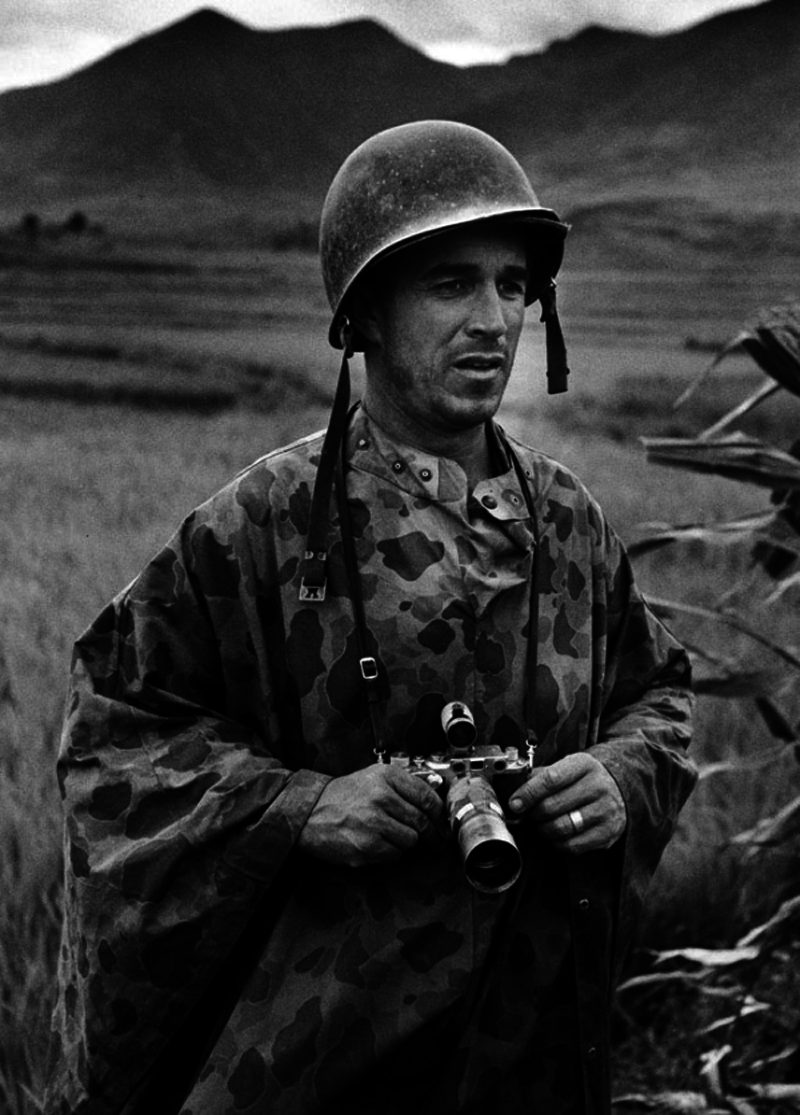 Press photographer of the magazine LIFE David Duncan in Korea

We appreciate the feat of Duncan and all military photojournalists, who, despite all the hardships and deprivations, forever capture moments of wars.

These moments help to understand what soldiers have to go through, what shocks to experience and what price to pay for it. This is war!