January 13 2016
22
Behind the flames of the Syrian war, two fundamental events in the Middle East remain in the background: 1) sanctions have been lifted from Iran, the United States and Europe actually normalize economic relations with Tehran; 2) The United States has deprived Saudi Arabia of its main ally in the Islamic world of special relations, although this country has the largest US military bases in the region.


It is known that the SA together with Turkey with the support of the United States is responsible for the outbreak of a civil war in Syria, which resulted in the emergence of the ISIL phenomenon. The US-led coalition struggle against ISIS paradoxically led to an increase in the territory controlled by jihadists, in the fall of 2015, ISIS was close to the capture of Damascus and the overthrow of Syrian President Bashar Al-Assad.

However, Russia intervened in the Syrian war, the armed forces of the Russian Federation began to really bomb ISIS, and the Syrian army of Bashar al-Assad launched an offensive on all fronts, the jihadists began to incur significant losses. At the same time, Russia organized its own coalition against ISIL with Iran, Iraq and Syria, and supplied the modern C-300 air defense system to Iran.

Against this background, 2 January 2016, the Saudis demonstratively executed the prominent Sheikh Nimr al-Nimr, the leader of the Shiite minority in the country, and predictably exacerbate relations with Shiite Iran, where in response to attacks on the CA mission. Countries have already severed diplomatic relations, which usually precedes the outbreak of hostilities. In this apparent confrontation, the United States is calling for a diplomatic resolution of the escalation that has occurred, that is, in fact, they are distancing themselves from the Soviet Union, taking an equidistant position towards the parties to the conflict.

“The United States no longer provides support for the Saudi royal house, it panics, and the Middle East is turning into an oil and powder keg at the same time,” the Israel Hayom publication gives its assessment of the situation, which in this case can be considered close to an objective view.

What happens, what does all this mean? Just some anti-Saudi plot, and with the participation of Washington. Earlier, a low-budget version was expressed that the US wants to direct ISIS aggression, after seizing Syria, to Saudi Arabia, which has begun to pursue an overly independent oil policy. There is a logic to this: according to the same scenario, the Libyan tiger Muammar Gaddafi was overthrown and killed.

Gaddafi also regularly, like the Saudis, supplied oil to the world market, was friends with Europe, but imagined himself an independent leader. In punishment, Washington incited Islamist extremists against Gaddafi, and then the collective West also provided them with military support. It seems that Washington wanted to subject the same punishment to the royal House of Saud, and ISIS was to be the executioner, recalling that he had immediately made threats against the Saudis. However, the entry into the Syrian war of the Russian Aerospace Forces, who began bombing ISIS, disrupted this scenario.

In general, the entire current situation in the region is a long-term result of US policy, the destruction of secular regimes through the instigation of "democratic revolutions". But this did not at all lead to the strengthening of the influence of the monarchies of the Persian Gulf in the Middle East, who sponsored these revolutions. The main prize, which, apparently, was promised to them in return, the Alawite-Shiite Syria, they did not get, and no longer get it.

But the US military defeat of Saddam Hussein led to the establishment of Iraqi Shiite rule in Baghdad, while Saddam was still a Sunni, and Saddam's Iraq was a stronghold against Shiite Iran.

After the overthrow of Saddam Hussein, the Shiite majority “democratically” established themselves in power in Baghdad, the territory of Iraq turned into a war zone between Shiites and Sunnis, and the latter in a minority. Iran, in fact, established a protectorate over Shiite southern Iraq with its capital in Baghdad. Northern Sunni Iraq was ruled by ISIS, and the Kurdish self-defense peshmerga groups. For these Iraqi consequences, Riyadh is incredibly angry at Washington, and apparently suspects him of treason.

In addition, instability from Syria and Iraq began to spread to Saudi Arabia, as well as Turkey. Already as a religious war between Sunnis and Shiites, when all infidels are declared terrorists. The executed Shiite sheikh, by the way, preaching non-violence, was declared a terrorist by the Saudis. In Yemen, the Saudis are fighting with local Shiites, without much success, and may be in a situation of war on two fronts, also with Iran.

In addition, there was LIH. Israeli media directly identify ISIS with Turkey. Since Erdogan is the head not only of Turkey, but also of Turkish “Muslim brothers”, who consider all the jihadists in the Middle East to be their brothers. ISIS’s anti-Saudi encroachments provoke tensions between the SA and Turkey, isn't that why Erdogan visited Riyadh in December?

While the leader of the Turkish Democratic and Pro-Kurdish Party, which is in opposition to Erdogan, Demirtas is visiting Moscow. In south-eastern Turkey, Ankara’s conflict with the local Kurdish population has resumed, assuming the character of a partisan war. Moscow, after the incident with the Su-24, has provided great support to the Syrian Kurds, and in general to all anti-Erdogan forces in the region. The USA is considered to be their duty to take care of the Kurds.

On the one hand, this is an old Middle Eastern conflict with overtones from Sunni-Shiite hostility. But to its development, and in a very unfavorable manner for the Sunnis, and for their own money, led the "democratic" policy of the United States in the region, culminating in the defeat of the Saddam Hussein regime. Which, objectively, strengthened the role of Iran in the region. Now a collision is clearly outlined, on the one hand, the SA and Turkey, if they solve the ISIS problem, and on the other, Iran, Iraq, Yemen and Syria.

The increase in CA oil production, which has led to a drop in its price on world markets, and to which many explanations are given, is most likely a revenge by the Saudis to its guardian — the United States. For the increasing influence of Shiites in the Middle East, and especially in Iraq. Actually, after the Saudis' oil dumping, the United States cooled to them.

It is clear that the Great Middle Eastern War will lead to an increase in oil prices. Who among the global players are interested in high oil prices? Russia, however, it does not have enough influence in the region, and on Iran, and even more so on the Saudis and Turkey. Russia is dangerously close to a possible conflict, and Moscow is trying to act as a mediator in resolving the crisis between Iran and the SA. 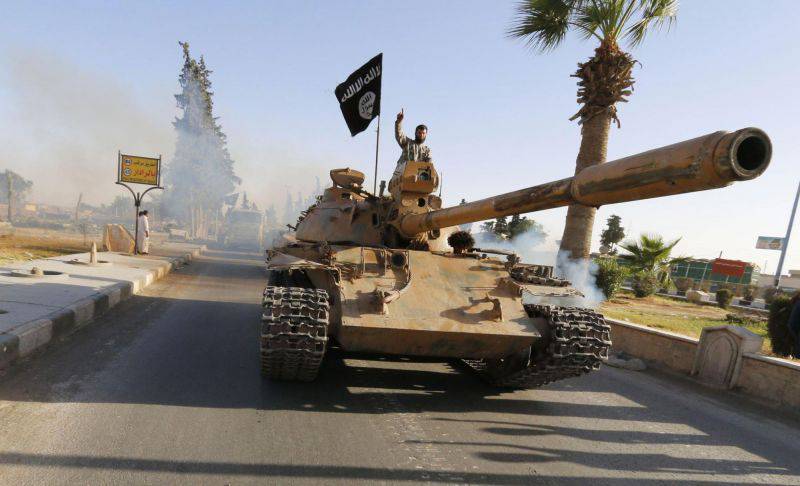 And the US is interested in high oil prices, because they are now entering the world market with expensive shale oil. Shale oil producers in the United States need 70-80 dollars per barrel, therefore, in order to pull out their shale industry and occupy a worthy place in the market, the United States must eliminate cheap oil producers. Only the interests of the Anglo-Saxons are unchanged, as is well known, and the allies are transient, especially if they become competitors, like Saudi Arabia.

Thus, objectively, the United States and Russia are interested in raising oil prices. This, by definition, is a winning combination, and the NATO status of Turkey is not a barrier to it. Only Erdogan’s huge compromising material on Washington is a known hindrance, but ... Gaddafi’s compromising information on Sarkozy, and Europe in general, didn’t help him at all. Erdogan can repeat the fate of Gaddafi, if he continues to play the role of the sultan, like many Saudi princes who imagined themselves caliphs ...

The United States at one time fueled Iran’s conflict with Iraq, and now it seems they want to repeat this scenario between Iran and Saudi Arabia. Washington was unable to direct the ISIS aggression against the Saudis, and now it counts on Iran, behind which Russia stands, but does not have the right to "veto" ...

Apparently, the great Middle Eastern war is not far off, its beginning is already before our eyes, but nobody will say how it will end today ...