The Strait of Hormuz - the future "hot spot"?

January 13 2016
22
At the end of last year, Foreign Ministry spokesman Hong Lei said at a press conference that China hoped to maintain stability in the Strait of Hormuz. It was about a possible Iran blocking the strait. Beijing had previously expressed concern about the likely big war in the region that would impede navigation in the Strait of Hormuz. Analysts say that the transport arteries of the Middle Kingdom "squeezes" the conflict in Saudi Arabia and Iran. 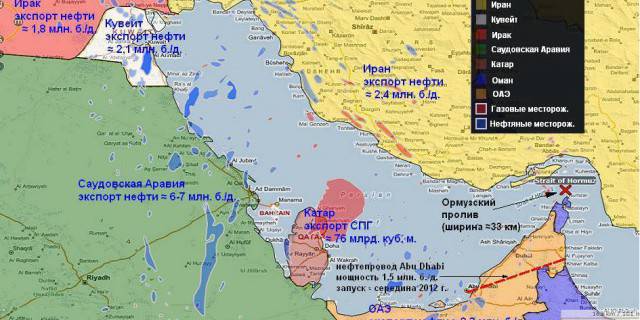 The question of journalists and the response statement arose not from scratch. Earlier, on December 27, Iran’s First Vice-President Mohammad Reza Rahimi warned that if Western countries impose sanctions on the export of Iranian oil, Iran will block the Strait of Hormuz. In addition, Iranian Navy Commander Habibollah Sayari 28 of December reported that the Iranian Navy could "easily" block the Strait of Hormuz. Writes about this Chinese resource russian.people.com.cn.

The Strait of Hormuz is one of the “arteries” of the New Silk Road. Through this transport artery comes a significant proportion of oil imported by China from the Middle East. At the same time, Iran is one of the main Chinese suppliers. However, Beijing also buys oil from the Saudis, thinking about diversifying supplies. And here politics interferes with the economy: the Saudis and Iranians are not friends. The three leading suppliers include Iraq, a situation in which you cannot call a stable one. Together, Riyadh, Tehran and Baghdad give China more than 50% of the oil it consumes.

According to Sarkis Tsaturyan, the conflict between Saudi Arabia and Iran squeezes the transport arteries of the Middle Kingdom. This analyst told the site IA "REGNUM".

After the outbreak of mutual antagonism in Riyadh and Tehran, Deputy Minister of Foreign Affairs of the People's Republic of China for Western Asia and North Africa Zhang Ming visited. “We hope that the situation in the Middle East will stabilize and the parties will maintain peace,” the official statement from the Chinese Foreign Ministry said. The head of the Iranian diplomatic department, Javad Zarif, in response, promised to expand cooperation with the PRC after the lifting of sanctions.

According to Tsaturyan, the United States is trying to weaken the trade ties between Saudi Arabia and Iran with China. Beijing has become a key consumer of oil and petroleum products supplied from Iran and Saudi Arabia. Americans "can only hope for an escalation of tension," the analyst is sure.

“The picture becomes clearer: the United States is trying in every way to weaken the trade relations of Saudi Arabia and Iran with China, which are conducive to the energy security of the latter. Bleeding Shiites and Sunnis - the easiest way to carry out such an operation. Moreover, now the Chinese economy is under pressure from an expensive dollar, unsuccessfully trying to stimulate exports through the devaluation of the yuan, which fell to the level of May 2011. ”

According to the expert, Washington is not interested in the fact that China reigns supreme in these countries: after all, the total oil reserves in Saudi Arabia and Iran are estimated at 400 billion barrels. The US Navy's 5 Fleet often conducts “anti-piracy raids” in the Strait of Hormuz. The "intrigue" remains, despite the agreement on the Iranian nuclear program. The speaker of the Iranian parliament, Ali Larijani, reminds the columnist, threatened the US administration with retaliatory measures - if the US Congress imposes additional restrictions against Iran.

It was hardly accidental that the visit of Chairman Xi Jinping to Iran was planned (to be held on January 23). Undoubtedly, the leaders of states will discuss Tehran’s problems in relations with the West. The economic goal is also pursued: the Celestial Empire intends to invest tens of billions of dollars in the Iranian petrochemical industry. In turn, the president of the Islamic Republic of Iran, Hassan Rouhani, intends to enlist Beijing's political support.

As for Saudi Arabia, she, the expert writes, “keeps confidently”: Riyadh accounts for 11% of world oil production. Not so much Iran is competing with the Saudis, as Iraq, in December last year, announced a "strategic partnership" with China. Beijing now accounts for 50% of Iraqi oil exports!

In addition to Syria and Iraq, the Iranian-Saudi confrontation expresses itself, the analyst recalls, in the situation in Yemen, which has access to the Bab el-Mandeb Strait and the Red Sea.

The Middle East has become an arena where the US and China are making scores, the author sums up. And the Strait of Hormuz is the "Achilles' heel" of the world oil market and the PRC's energy security.

The collision between the USA and the PRC in the Persian Gulf zone is quite possible, believes Yakov Berger, a professor at the Institute of the Far East of the Russian Academy of Sciences. “The Strait of Hormuz is one of the sensitive points of the future economic belt of the Silk Road. For the United States, this project is a direct competitor to the American Initiative of the Pacific Partnership, ”said Berger to the online publication. "Reedus".

In the event that Beijing is sensitively “pressing its tail” to Washington, provocations are not excluded. The expert admits that the attacks can be from any of the parties.

Berger recalled that Beijing is strengthening its military presence in the Middle East and the Horn of Africa. Not so long ago, an agreement was concluded with Djibouti on the construction of a naval base. This is the first base of the PRC Navy outside mainland China, but hardly the last.

The professor believes that a direct military clash is unlikely, since the United States and China are not the same as the two Koreas.

Thus, it is not by chance that China expresses its hope that the situation in the Middle East will stabilize, and at the same time it makes frequent statements about maintaining stability in the Strait of Hormuz.

Anyone who buys oil from political opponents like Iran and Saudi Arabia and simultaneously launches the global “New Silk Road”, blocking the Strait of Hormuz, this major transportation artery, has to bear in mind not only the likely economic and political crisis in a difficult region, but even military clash of the opposing sides. Some analysts believe that “Americans are counting on the escalation of tensions in the Strait of Hormuz, who do not like the“ undivided rule ”of the PRC in some countries of the region.

Observed and commented on Oleg Chuvakin
- especially for topwar.ru
Ctrl Enter
Noticed oshЫbku Highlight text and press. Ctrl + Enter
We are
Iran in the Syrian conflict. The confrontation with Saudi Arabia and the interests of the Shiites"Dirty water"
Military Reviewin Yandex News
Military Reviewin Google News
22 comments
Information
Dear reader, to leave comments on the publication, you must sign in.