January 11 2016
104
The Christmas event in Cologne shook Europe. Here the meeting was overshadowed by the “hunt for women”, which a large group (police counted a thousand people) arranged on the square in front of the cathedral of young men of “North African appearance”. They robbed and harassed the women gathered in the square. There are several known cases of rape. Allegations of robbery and humiliation were reported to the local police at night around 90 victims. Later their number increased almost six times - up to 516. At the same time 40 percent of the allegations received by the police were about the sexual harassment of migrants. 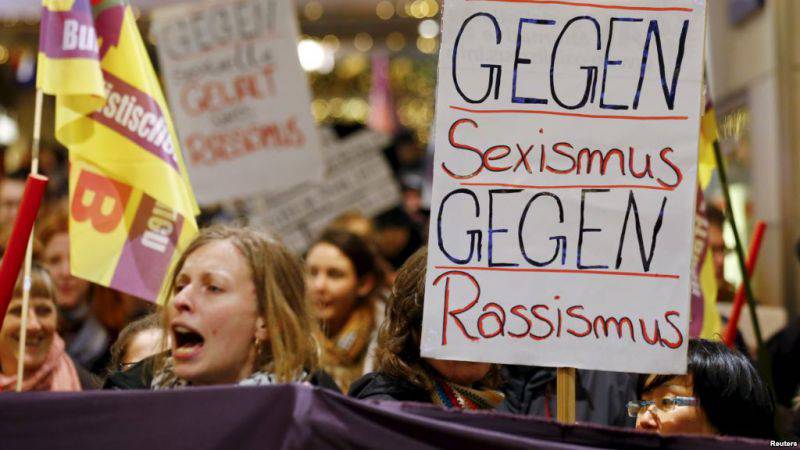 It makes no sense to savor the details of these heinous crimes. I note only two circumstances. The first is the reaction of the German media to the Cologne incident. They were stupidly silent for three days. Then, little by little, they began to report the details of what had happened, accompanying the publication with reservations about the inadequate behavior of drunken migrants and proposals to wait for the final investigation. Along the way, it turned out that similar incidents happened in Berlin, Hamburg, Düsseldorf, Stuttgart and other cities in Germany, Austria, Switzerland. Only the scale of the violence was less there.

Most likely, the German media usually categorical in their assessments digested the unpleasant newsin order not to cast a shadow on the official position of the authorities, who are passionate about multiculturalism and the arrangement of refugees who illegally entered the territory of the country. This second circumstance is the interest of the authorities in migrants. It was reflected at the press conference, which was convened by the Mayor of Cologne Henrietta Röker in connection with the incident. Frau Röcker stated there: “women can always avoid harassment” and advised the Germans to change their behavior in public places, to keep from strangers at arm's length.

This shift in focus - from the behavior of besieged migrants to victims of violence - has surprised many. After all, Henrietta Röcker herself survived an attempt on her life no further, as last October. Then, during a pre-election meeting in the local market, Röker was attacked by an armed man and seriously wounded him with a knife in his neck. In the police, he explained his actions by being outraged by the sympathy of the future mayor towards migrants.

Doctors came out Frau Röcker, and the voters together voted for her. Now Henrietta Röcker is the ober-burgomaster of Cologne and instead of protecting the city dwellers from violence gives them "useful advice." On the local social networking forums, the Germans gave vent to their indignation. Their reaction made Röker bring public apologies to the victims at the cathedral square. For justifying migrant rapists, he criticized the Cologne mayor and the Minister of Justice of Germany, Heiko Maas, but also with the proviso: "You can not use these crimes to discredit all refugees."

What does Europe not want to see?

The reservations of German journalists and officials are more like polish than a reaction to a real situation. It is necessary to understand that conservative and radical Islam entered Europe. Its carriers little resemble the faithful Muslims, but the harm of civilization has already brought Nemer. The crimes of the Islamists highlight violence against women. Radicals, if they do not despise them, they certainly do not consider themselves equal to themselves, but subordinate and disenfranchised.

For the first time the world saw it five years ago in Tahrir Square in Cairo. Then, driven by protest against President Hosni Mubarak, Egyptian women joined the mass actions of the rebellious "Muslim Brothers", but were rejected by a crowd of men, subjected to humiliation and violence. According to official data only, 25 protesters were publicly raped in Tahrir Square. Got and journalists, covering the "Arab Spring" in Egypt.

The most resonant incident of that period was история correspondent of the American television channel CBS Lara Logan. In February, 2011, in broad daylight, was beaten and raped by the Egyptians, who celebrated the resignation of the president. It is less known that during the protests five more journalists from the Western media - a British woman, two French women, a Dutch woman and another American woman - were subjected to public violence. These women were not just raped and humiliated, but literally torn to pieces. They needed serious medical care. 22-year-old journalist from the Netherlands, the doctors saved it altogether, they even operated on her.

Now this wildness has come to Europe. We used to meet her mainly in the Arab East. Here Islamic terrorists are extremely cruel to women. Only in the Iraqi Mosul, they executed almost a thousand. There is ample evidence in the press how Muslim women who succumbed to jihad were eventually beaten to death or executed. Just the other day, a monstrous message came from the Syrian Raqqah. There, an Islamic militant brought his mother to the town square and publicly killed her for asking her son to leave the ISIS terrorist group.

Europe does not want to notice this. The local politicians have a different mood. In migrants, they see the workforce that will support the continent’s economy, staggering from depopulation. In Germany, for example, the lowest birth rate in Europe is now. The authorities estimate that by the 2030 year without the influx of migrants able-bodied in the country will be less by 6 million people, and by 2060, the population from the current 80 million will be reduced to 68-73 million. Hence, all these revelations about multiculturalism, tolerance, tolerance ... The pragmatics of economic calculations determine migration policy.

To confront it is not easy. In August 2010 of the Bundesbank Board Member Tilo Sarratsin published the book The Self-liquidation of Germany. Then he gave curious figures: in 1960, in the Hamburg port, 14 thousands of people were engaged in unloading and loading, after half a century, only 2,4, thousands of workers, dealt with it, and the freight turnover grew almost four times. High labor productivity was ensured by the corresponding professional training of port workers.

In the new time, according to Sarratsin, the German economy requires not only able-bodied personnel, but highly qualified ones. It’s not easy to find such migrants. The majority in their midst do not possess not only modern professions, but even an acceptable education. Moreover, displaced people prefer to “sit” on social benefits, and are satisfied with that. Tilo Sarratsin noted that among Arab and Turkish migrants the share of those who receive social benefits is four times higher than among Germans.

Not without emotional assessments. “I do not want the country of my grandchildren and great-grandchildren to become predominantly Islamic. I do not want women to wear headscarves, and the general rhythm of life would be determined by the shouting of the muezzins, ”wrote Sarrazin. “Germany’s self-liquidation” was released from 30 in August, and already on September 2, the Federal Bank’s Office petitioned the President of Germany for the release of Tilo Sarratsin from the position of member of the board of directors.

On this financial and political career Sarratsina ended. But the Germans reacted to the book with great attention. She withstood millions of copies, brought the author a very decent income and ... a steady accusation of chauvinism and racism by the political establishment.

I don’t know whether Tilo Sarratsin’s book was remembered last fall in Bavaria. The forecasts of a retired financier have already begun to come true here. From educational institutions of the German town of Peking in Lower Bavaria, letters came to parents of girls studying at local schools with a request to ban schoolgirls with mini-skirts and short shorts. According to the authors of the letters, “such outfits provoke insulting feelings of migrant boys studying in schools professing Islam and can generate unnecessary attention or even violent attacks from their side.”

Another ban has already concerned the parents themselves. A certain Murad al Muradi published in the local media an open letter demanding the abolition of national German entertainment - the Oktoberfest beer festival, as well as Christmas trees and festivities. The author of the initiative was sad that drinking alcohol and Christian celebrations insulted the feelings of Muslims.

The Belgian co-religionists of the new German inhabitant did not write letters to the newspapers, but simply shouting “Allah Akbar!” Burned the Christmas tree in one of the squares of Brussels. Video of the incident was posted on the Web, for the edification of those municipalities where they had not yet refused to ring the bell for Christmas, New Year's fireworks or decorated for the holiday of Christmas trees.

In other cases, Muslims already make decisions themselves. For example, in the Danish town of Kokkedal (a suburb of Copenhagen) in the local municipality, the majority now belongs to naturalized migrants. Referring to the lack of money, Muslims by a majority vote (five out of nine) simply banned the celebrations on the occasion of Christmas. At the same time, three months earlier, Eid al-Adha was celebrated at government expense in the town. The Muslim celebration cost nine times more than the Christmas estimate.

The indigenous inhabitants of Kokkedal came out with a protest, got the Christmas tree to be installed in the town, and the administration of the municipality was disbanded. This little victory was not easy. In the houses of protest activists, the attackers poked all the windows. Residents of neighboring areas came to the rally to support the indigenous Danes, but were dispersed by a crowd of unknown people.

Fear of migrants causes Europeans to abandon traditional values. In many cities, they have now canceled New Year's festivities and holiday decorations of the settlements. In Great Britain, instead of wishing Merry Christmas or New Year, the most intimidated began to congratulate each other on the “Seasonal Holiday”. Distinguished here and the Ministry of Education. Due to the demands of the local migrant communities, it suffered traditional school exams, which coincided with the Muslim holy month of Ramadan in 2016. You can still recall the radical sermons in mosques, Muslim patrols on the streets of London ... and the total inaction of local authorities.

All these concessions do not lead to social peace and tranquility. Christmas accidents in Europe - more proof of this. Today it is obvious: the multiculturalism advertised here did not become an instrument for the integration of migrants into European society, but only created a parallel world. Now he has become stronger, and is already crowding the aborigines of the continent, increasingly subordinating their lives to the rules, traditions and desires of new settlers. Europe is starting to lose face, and it is not yet clear that one of the leading politicians is trying to reverse this trend, which threatens the interests and values ​​of indigenous Europeans.

Ctrl Enter
Noticed oshЫbku Highlight text and press. Ctrl + Enter
We are
Raped Europe. What awaits Germany and other countries after the "fun night in Cologne""Trouble" of the Promised Land. African immigration to Israel
Military Reviewin Yandex News
Military Reviewin Google News
104 comments
Information
Dear reader, to leave comments on the publication, you must to register.