It is time for the Pentagon to learn Russian 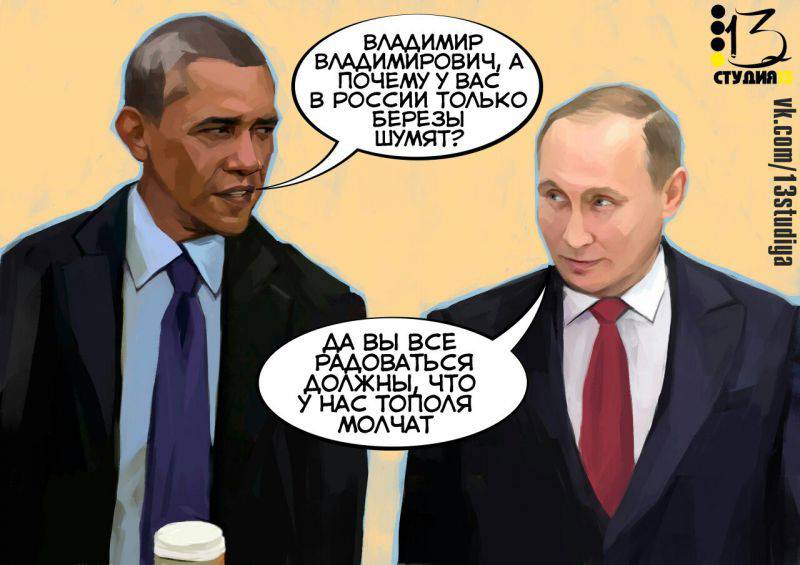 On the last day of the past year, Russian President Vladimir Putin signed a very important decree introducing the new National Security Strategy of the Russian Federation. Read the text of the decree and the Strategy itself can be on Russian newspaper website. Since our overseas "partners" ended the Christmas holidays, and they didn’t celebrate the New Year on a Russian scale, they rushed to read the document and make statements in the American press. And for some reason, when reading these statements, I recall a joke about Vovochka, who learned only fleas for the biology exam.

Seeing in NATO’s familiar letters “NATO” in the 15-th point of the Strategy, Pentagon spokesman Jeff Davis was surprised to find out that we consider the approach of NATO to our borders as a threat to Russia's national security. Mr. Davis did not think of anything better than a purely childish objection: “They have no reason to consider the US a threat. We do not seek conflict with Russia. We have differences, but it would be a fundamental mistake to consider the United States as a threat to Russia. ”

Only the representative of the Pentagon made a reservation that he was acquainted only with open sources and would like to see the entire document. Well, just like the unforgettable Jen Psaki with her beloved: "I will clarify in the office." What does it mean? The text is laid out in an open source on the site of "Russian Newspaper". As they say, take and read. So there in Russian. This is what happens? Have the Americans transferred only the 15 point, on the basis of which he makes such statements?

Although it is not surprising. The Washington Post writesthat in the US there is a lack of specialists in Russia. When the USSR was, the Americans had a whole cohort of competent Sovietologists. The cuts in funding for Russian studies at universities and research centers have caused a record decline in interest in the Russian language among students. And now the congressmen are complaining that many of Russia's actions are a surprise to them, since the level of current experts on Russia is below the plinth. In some NATO units there is not a single person who knows Russian to read the Russian press. Served themselves.

Not only they served themselves. We helped them in this, too. Experts complain that mutual sanctions have already reduced student exchange programs. It also turned out that our laws against foreign agents and undesirable organizations also considerably reduced the possibility for Americans to collect information about Russia. That is not for nothing that we consider these organizations as spyware in essence. But back to the National Security Strategy.

15 strategy point is not some news. I don’t remember how old Russian President Vladimir Putin has been talking about the inadmissibility of the uncontrolled expansion of NATO to the borders of our country without consulting with the Russian leadership. But Russia has long been no longer a weak, albeit the largest, fragment of the Soviet Union, but a powerful, dynamically developing power to be reckoned with.

If the American warrior could read at least the second section of the Strategy, which is called “Russia in the modern world,” he would have learned that we consider NATO and the US to be a threat not only to Russia, but to the whole world. And this is evidenced by iron facts. Who around the world is satisfied with the "revolution", leading to the overthrow of legitimate governments, followed by a mess or the establishment of puppet governments? Russia? Not. Who has bombed the cities of Yugoslavia, Iraq, Libya, Afghanistan over the past 25 years? Who places military bases around the world and spies even for their allies?

And where is the aggression of Russia, because of which the US considers our country a threat to itself? Let's calculate how many “color revolutions” and where did our country arrange? Zero. How many times has Russia attacked other countries in order to overthrow unwanted regimes? Someone will remember the five-day war with Georgia. Only it does not fit. Our army shuganula Georgians from Tskhinvali, and returned back. How was Saakashvili, and remained. Crimea? Bloodless operation to establish control over strategic objects. After the referendum in the Crimea, the peninsula became Russian. Syria? Our VKS operate there at the request of the legitimate leadership of the country and destroy the bandits with their infrastructure.

Where is the aggression of Russia? Maybe we will find it in the National Security Strategy? Let's look for something like 116: "For the sake of national security, Russia needs to overthrow the governments of the countries that support the sanctions and defeat NATO." There is no such item there. But there are others who prove the peace-loving policy of our country.

Russia understands the role of the United States in the present world, and therefore offers cooperation in the field of international security. At the same time, the United Nations and the Security Council should become the main element of this system and the central platform for the political dialogue of all countries. Is this a manifestation of Russian aggression and a threat to the US national interests? If US national interest is world hegemony, then this is a threat.

Politics begins with the recognition of others having their own interests. After the collapse of the Soviet Union, the United States decided not to reckon with anyone’s interests, but to promote only its own by hook or by crook. Former US ambassador to Russia, Michael McFaul, said that 20 years ago, America had made a mistake, considering Russia a dying empire, and not noticing the potential for a rebirth.

Now Russia is among the top ten leading economies in the world, and in terms of innovation it takes the 14 place. Thanks to the reform of the army, Russia has become one of the strongest military powers. According to McFaul, this is a long time. Unlike the “strategists” from Washington, McFaul worked in our country and knows more than all of them. His words should be heeded by the next US president, whose election will take place on November 8 of this year.

Ctrl Enter
Noticed oshЫbku Highlight text and press. Ctrl + Enter
We are
A great interview with Sergey Lavrov: about Ukraine, Obama and IranInterview of V. Putin to Channel One and the Associated Press Agency
Military Reviewin Yandex News
Military Reviewin Google News
201 comment
Information
Dear reader, to leave comments on the publication, you must to register.