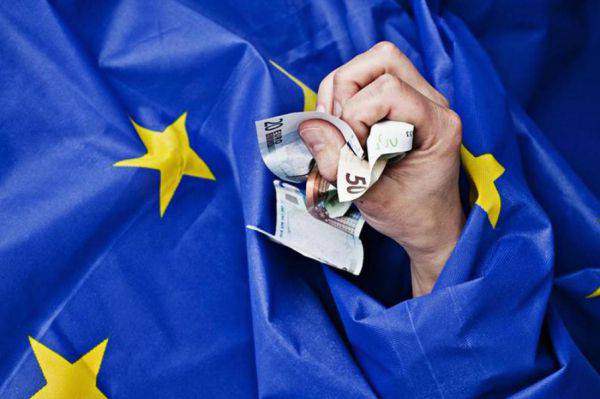 Let's try to summarize the "sanctions" stories of the past 2015 year. As everyone knows, Europe and America extended the sanctions against Russia for another six months - until July 31 2016. But is the opinion in the European Union unambiguous regarding the decision taken to continue the course of geopolitical pressure to the detriment of its own economic interests?

It is no secret that the reaction to the sectoral restrictions imposed on Russia in the world and, in particular, in Europe was, say, far from unequivocally positive. Rallies, marches, protests, boycotts that accompanied this decision - this is confirmed. On the multi-billion dollar financial losses on both sides and can not speak. However, the Russian side has already partially managed to recover, but the same cannot be said about the EU in any way.

Thus, the head of the "Eastern Committee" of the German economy, Eckhard Cordes, the outgoing, betrayed the toughest criticism actions taken by European politicians. Previously, the economist has repeatedly stated the need for the manifestation of real political will in the direction of rapprochement with the Russian Federation.

Europe and Russia are natural partners in all plans, and therefore, according to the economist, any manipulation associated with any attempts to fence Russia is absolutely counterproductive. And the reason, as is known, officially announced as the reason for the extension of restrictive measures - sounds extremely unconvincing. To tell that points of contact For participants in all sorts of relationships, there is much more than disagreement - to say nothing.

“We are interested in their [sanctions] withdraw. Russia and the EU as important economic partners should strive to normalize relations, ”the EU ambassador to Russia Vygaudas Ušackas noted. According to the head of the representative office, these relations are most important for Europe. He also mentioned that 5% of all investments in the investment plan go (well, or went, he did not specify) from the EU. However, it is worth noting that in terms of trade relations there has never been any disagreement.

There is interest in restoring relations, on the part of business (of any caliber, from transnational corporations to private farmers), on the part of politicians, and even European economists are actually sounding the alarm, but nothing. But there is no will. Will it appear? The question is open.

So, Russian Foreign Minister Sergei Lavrov noted that in the EU, in principle, consider confrontation with the Russian Federation as a mistake in connection with the situation in Ukraine (although there is no conflict in Europe, there is only following the externally given American course). You can talk about the latter endlessly. From the logical inconsistencies can "go to the roof," and any sane person will pass by, twisting his finger to his temple.

Interested, want to withdraw, want to cooperate (and, moreover, cooperate on most issues), but do not want to reflect and untie a tangle of inconsistencies. Strange people, is not it? But we will not criticize anyone, after all the holidays. Just trust is not iron, it is crumbling, although it has been built over the years. And in general, if you suddenly allow the option that Russia will give up and give in to all the pressure that was exerted on her from the outside, then who would suddenly like an isolated Russia? No one. In all respects, in all respects.

But the task after all is that the EU (as it turned out lately - the geopolitical block) is completely different. To achieve the goal that was put before the sanctions, it is impossible a priori. Crimea, even de-energized for a while и с thief administrationwill not return to Ukraine. And what? In a senseless war (and far from being European) all means are good? At the cost of sacrifices, at the cost of losing all connections? For what? The last question is rhetorical.

Of course, maybe everything will return to its own place, perhaps meaningless geopolitical ties will eventually lose to common sense and mutually beneficial, promising relations. But so far we have what we have - sanctions until the end of July, a retaliatory embargo, “black” lists and all that is connected with all this. On the other hand, the existing prospects for the growth of our own economy, the rise of domestic production, the establishment of really necessary relations - perhaps, we see these sanctions.

Will they be extended afterwards (such as foretells the head of RUSNANO, Chubais), or, on the part of Europe, everything limited to the next six monthswill decide the time. Well, or the one who really rules the ball in Europe. But one thing is for sure: the former relations of Russia with the EU will never be. Only business, gentlemen, too often had to burn for lies and betrayal.

Ctrl Enter
Noticed oshЫbku Highlight text and press. Ctrl + Enter
We are
About Stalin and KhrushchevRevealed the secret of provocation in the American Boston
Military Reviewin Yandex News
Military Reviewin Google News
219 comments
Information
Dear reader, to leave comments on the publication, you must sign in.