Terrorism and the US alliance with the Gulf countries - we did not even notice an elephant (CounterPunch, USA) 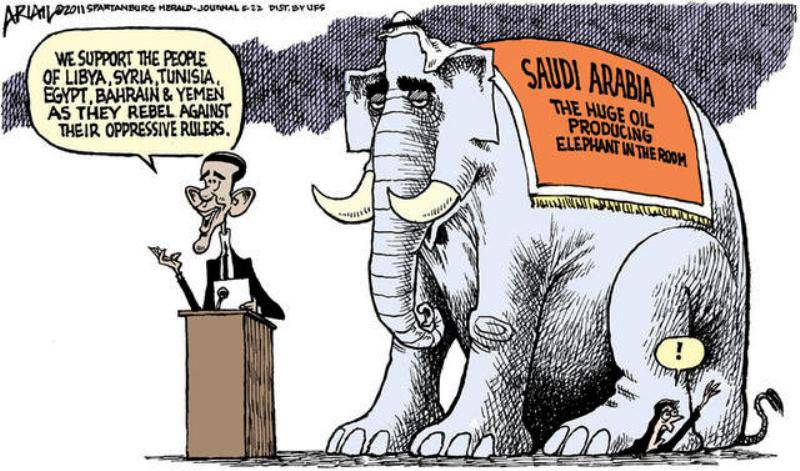 When it comes to existing discourses on efforts to resist radicalization and subsequent extremism, it turns out that Western politicians and media issues want to address anything but long-term processes.

The Gulf States (namely, Saudi Arabia and Qatar) became an elephant in the china shop, whose government organizations worked as an ideological incubator in which extremist feelings flourished, both within countries and abroad.

This is rarely talked about sensibly, since the Saudis continue to hire a number of American lobbyists and PR specialists, one of them is PR Edelman. The world's largest privately held PR agency, Edelman is known for helping clients in positive media coverage in leading media outlets. At the same time, the Saudi-led coalition continues to bombard the poorest countries in the Middle East (Yemen), violating international law, which - like so much else in their activities - is being approved by the West because of its delicious arms deals, which in turn provides Gulf countries with impunity for action. This explains the noticeable blindness of the media and the minimal coverage of events in Yemen in the leading Western media.

If you look at the links of extremist movements with these countries, it turns out that they use various direct and indirect methods of financing and arming. The first example is al-Qaida-linked Jabhat al-Nusra in Syria. The Gulf States, together with a member of NATO Turkey, effectively armed them under the pretext of arming the so-called moderate coalition Jaish al-Fatah, which itself consists of fanatical groups of Sunni Islamists, like Ahrar al-Sham.

Qatar, in particular, is known for having financed such groups, paying ransom, acting as an intermediary in hostage situations. The most recent example is in Arsala (Lebanon), where Qatar mediated in the exchange of prisoners for the release of Lebanese soldiers taken hostage. Using this method has allowed them to avoid funding charges for those who are actually al-Qaeda militants.

Nowadays, a large proportion of extremism that we see today is rooted in support of the US and Saudi Arabia for the Afghan Mujahideen in 1980 for the war against the Soviets, we know them as the Taliban. It is significant how such a policy of arming the "moderate Islamists" unfolded in such a way that it hit the United States, which has to invest in conflicts just to get rid of the problem, which they also helped and encouraged to create. We are witnessing a similar process today in Syria.

As part of this process, the Saudis will continue to use their petrodollars to finance and build fanatical religious schools. Only in the region of Punjab (in which extremism appears on a regular basis) has the number of madrasahs (religious seminaries) of Salafis increased threefold in the past several decades. The same is connected with the recent shooting in San Bernardino, because US officials found links between the notorious Lal Masjid mosque in Islamabad and a woman (Tashfin Malik) who took part in the ISIL-inspired massacre. This mosque is notorious for its links with past extremism and its leader (Molana Abdul Aziz), who in Pakistan has built a reputation for hateful rhetoric. In the past, he expressed support for ISIS, called the library after Osama bin Laden, and refused to condemn the massacre of schoolchildren in Rawalpindi (to the displeasure of even many of his followers).

In light of the shooting in San Bernardino and the attacks in Paris, it becomes almost inevitable that, despite the common efforts of the intelligence agencies, the terrorist attacks in the West will only become more frequent. However, we still have to see whether the Western governments will reconsider their position regarding the Allies in the Middle East. If they continue to bestow impunity on them, it will mean that any efforts to seriously take on extremists will only be hypocrisy, but it is their citizens who will continue to pay for governments that stubbornly deny the ideological roots of extremism.

Ctrl Enter
Noticed oshЫbku Highlight text and press. Ctrl + Enter
We are
Yemen war. Russia's interest - the weakening of the SaudisSaudi Arabia is preparing for a big war
Military Reviewin Yandex News
Military Reviewin Google News
81 comment
Information
Dear reader, to leave comments on the publication, you must sign in.