Continuation about grandfather Ignat, but not yet ending

January 7 2016
9
At the end of December, I began a story about my long-time business trip to the village of Volovo and how I met his native Ignat Vasilyevich Komarichev, whose military childhood came during the wartime, but it did not take place in Volovo but in the village of Rusanovka in the Dolgorukovsky district.
Let me remind you that I recorded these memories, having already returned home to Lipetsk. Grandfather Ignat told me slowly, in colors, and therefore the picture of his childhood presented itself so vividly to me, as if I saw everything with my own eyes. Maybe some of these readers will not seem to be relevant at the Military Review, because it’s not about the occupation time (the Germans took 1941 of the year in December), but about the end of November of 1941. There is no feat. However, if we talk about the children's feat, then I remember the poem by Maya Rumyantseva "Little" ...


Not with school apron -
With adult offenses,
As if by cards
Childhood has been issued.
Joy counted
Every new book,
Even the sky is teasing
Moon cake.
Small, small ...
We could not know the battle
But then, at the desks,
We were heroes.
On an empty stomach -
Only a hero can do that! -
Oranges with apples
Add yes multiply.
Yes, and right
Yes, and five,
Yes, even with this
Don't even cry.

So, the first military winter, which came a little ahead of time, did not regret the human race, and even the four-legged ones. It was snowing, giving away frost as early as November.
Ignatka often found frozen sparrows or tits near his house. He put them in the bosom of his old father's sheepskin coat, which he now wore. But the birds did not come to life.

Then Ignatka carried them to the forest and buried there as best he could: the earth was frozen. And instead of the grave cross stuck in the snow fir branches. Let the birds think that they are sitting in the trees.

Another redhead Petka also found birds. But he took them to his cat Vaska. Ignatka once saw this and gave Petka a cuff.

- So, it is possible to catch live fish from pond thawed patches, but dead cats can not be eaten by a cat, right? - Smearing tears on his cheeks, lamented Petka.
Ignatka wanted to give him a cuff again, but changed his mind. And suddenly he got cold from crazy thoughts: maybe, at the bottom of the pond, just like in snowdrifts, frozen fish lie? And no one will bury them and will not cover them with fir branches.

He shared his thoughts with Petka. He thought a little, tugged at his ear and said:
- It is necessary to burn fires on the shore. The water will warm up and the fish will come to life.
Ignatka surprised Petkina of guessing and went to collect brushwood.

The next morning, the guys met at the pond (today, this very Rusanovsky pond is a favorite place for recreation and fishing of many residents of the Dolgorukovsky district). Petka dragged embers from the stove in a rusty iron trough.

Bonfire swelled badly. The brushwood collected in the evening froze overnight. Ignatka rubbed it with his hands, and from this he warmed himself.

Finally, the first flames appeared. They timidly licked branches. And, having got stronger, the brisk marching melody cracked.

Petka hooked closer to the fire, stretched out his chilled hands, and murmured some kind of a driven song about him that should be kept away. Petka wrote the words on the go, they did not fit into the lines. But Petka sang from the heart, and therefore the song seemed to him beautiful and full of meaning. There was only one sense - the Red Army completely smashed the fascists and drove them along our land back home, as the mistress was driving a scrawny cat that got into sour cream. And ahead of the whole army, Petkin's father was driving the fascists, the strongest and most courageous.

Ignatka wanted to add a couplet from himself to the song, but he remembered about the fish that should be kept warm. And I went to the pond. The ice here, as before, was hard and did not melt at all. But Ignatka was pleased to think that there, in cold, cold water, frozen burbot and huge catfish began to come to life.
And in the meantime, in the meantime, hurried evening. He covered the village with the veil and the forest behind it. But he could not set a fire, and, probably, he was angry because of this.

Petka already wanted to go home. But he still fastened, pitying the fish. And only when the forest on the other side of the pond looked like a solid black wall, he sighed:
- Mamania potatoes, probably, bakes ...

Silently, Ignatka began to scoop up the snow with his hands, throwing a flame at them.
- Hey! - suddenly heard from the darkness. - Hey, by the fire!

The guys froze.
Ignatka strained his eyes and peered into the darkness — along the shore, out of the darkness into the light, some kind of figurine moved. In the deceptive fires of the fire, she seemed now big, now very tiny. The figure moved somehow strange: then it approached them very quickly and then grew right before our eyes, then stopped, and then it was difficult for Ignatka to estimate its size. With this figure all the time waving her hands, as if driving away the gloom.

- Hey! The figure shouted again in a thin, childish voice. - Where are you?
- Here! - Petka answered and also waved his hand.

The figure set off in an awkward run. She was increasing, and soon Ignatka realized that it was a girl. Out of breath from running, she stopped near the fire. In a long jacket the girl looked like an adult woman of small stature. Even very small - below Petka. The girl's head was wrapped in a large kerchief, from under which long strands of hair stuck to her forehead were knocked out on her forehead.
- Who are you? - Sternly asked Petka, just in case pushing to himself a rusty trough in which he brought coals.
- Katya…
- Whose? - Petka darkened even more, as if Katya had the wrong name. - Something I do not know you. Not Rusanovskaya, or what?
Katya suddenly began to roar and this seemed to become even less. She sobbed, wiping away tears with the end of her immense handkerchief.
- Ma-a-mkina-a ... She died, and yesterday ... Today her neighbors buried her. They said, now I will live with them, but I do not want to-ooh ...

Ignatka began to rake the snow again. Then he sighed and walked home, holding Katya by the sleeve.

Looking ahead, I will say that Katya later became the wife of Ignat Vasilyevich. I saw her: even in old age this woman was very beautiful. But for now let us return to that distant autumn day, when in Rusanivka, in the Ignatkina family, a new man appeared, warmed by a night fire for freezing fish.
Ignatkin's mother, Daria, did not object to the new daughter. And having learned that Katya lived in the neighboring village of Yelizavetovka, she found her former home, her neighbors, and took the girl’s things. True, Katya hardly got accustomed to the new family. Everything sat at the frozen window and was silent.

Ignatkin's mother watched her anxiously. From the mean, reluctant words of the girl, she already knew that a bomb hit their home: the Germans were getting closer and closer. Katya at that time was on the street. The explosion occurred before her eyes, one second divided the life into black and white. All who loved her - mother, sister and brother - are in the past. A seven-year-old girl was alone in this world.

And now, looking at the unexpected-unexpected daughter, Daria was tormented, not knowing what to do - to leave the girl alone or to speak with her more often. With the guys (remember, Ignatka had an older brother) Daria kept herself stern. The father is dead - who will learn their masculine power? She must.

But the mother had no daughter. And now, looking at Katya, Daria felt like little ice melted on her heart. But sometimes it seemed to her that it was completely frozen, and no spring would thaw him.

However, concerns about the household did not give the mother time to think. And, coming out of the hut, she turned around on Katya: is she sitting by the window or not? Kate was sitting.
But one day, Ignatka, while shoving his heavy felt boots, began to sigh: “I have three boots, my boots!” And Katya, as if waking up, laughed, glaring at Ignatka with black eyes:
- What are the three? Two boots - left with right. A pair is coming out.

Ignatka offended:
- I forgot to ask you! I can count myself, not a duck.

Devils danced in Katya's eyes. She got off the stool, took the ember and began to draw something on the stove. Long bangs sometimes fell on Kate's eyes, she was angry, straightened her, leaving coal dust on her hair.
Ignatka became interesting. He tried to stand up from behind, but the sly Katya kept turning her back on him. Then he brought a stool from the kitchen, climbed on it. Yes, and froze in place.
On a white stove adorned coal apples - a whole garden! Kate was a master of drawing.
- Wow! - only could utter Ignatka.
Kate turned to him:
- So count how many of them! These two are mine, and these two are yours. Well? Why are you silent, water is full of mouth, or what?
But Ignatka remained silent.
Katya drew a pear near the apples.
- I still have a pear. And you let the plum - appeared on the side of a large circle with a stick. How many, well?
Ignatka was silent.
- Well? And he said - you know how to count! Master you lie.
Ignatka suddenly roared in a voice.
- What are you? - Katya shouted at him.

But Ignatka did not answer. He ran to the stove, which was decorated with delicious fruit, grabbed ember and began to cover them. He hurried, the coal crumbled, leaving black marks on his fingers. Ignatka cried, smeared tears on cheeks with coal hands. Black streams appeared on the cheeks, they ran down, dripping onto the wooden floor.
- you what? You what - scared shouted Katya, clutching her cheeks.
Ignatka turned her face wet with tears, his eyes became angry.
- Count your own apples! And eat them! Here! - and choked crying.
Kate looked at him, quietly put the chalk and went back to the window.
And the hungry Ignatka cried for a long time, with an insult remembering apples, a pear and a circle with a stick, so much like a plum. Indeed, in their house now there was one potato ... 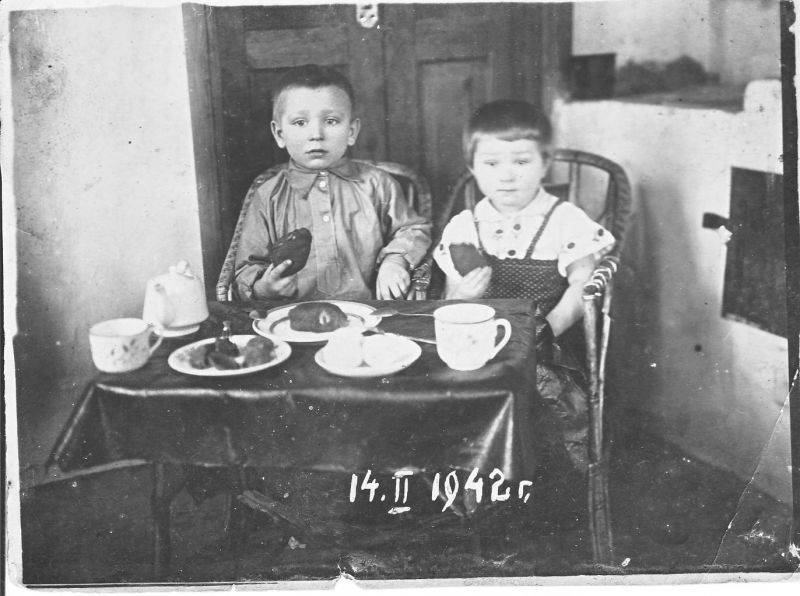