Birth of the country's eastern outpost 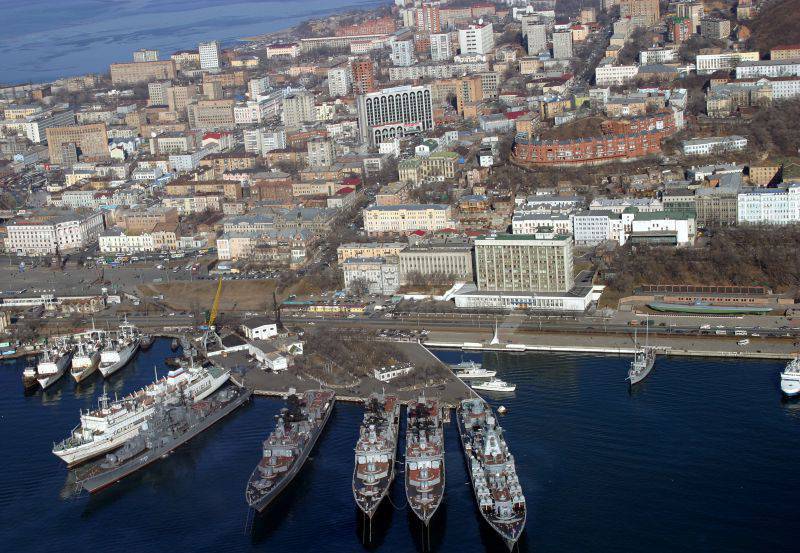 In the summer of 1859, Governor-General of Eastern Siberia N.N. Ants-Amur on the steamer "America" ​​entered the Gamelena Strait, which he renamed into the Eastern Bosphorus. Here, exactly 155 years ago, in 1860, the governor-general ordered that a military post be established in a deserted bay and named Vladivostok. Here, on the coast of the Golden Horn Bay, 20 on June 1860, the military transport "Manjour" arrived, landed a team of two non-commissioned officers and an 30 order soldier under the general command of warrant officer N.V. Komarov.

At the end of summer, the corvette “Gridjen” arrived in the bay for wintering, delivering a new batch of people and necessary goods. Under the guidance of the ensign artillery A.I. Kolchak team corvette were built officer wing, barracks, kitchen, barnyard. In the future, one or two ships of the Pacific squadron were constantly in the bay.

In 1861, the first official commander appeared - Lt. E.S. Burachek, written off from the ship due to illness, but left in the service. This appointment was made by the commander of the Siberian flotilla P.V. Kazakevich and the head of the Pacific squadron I.F. Likhachev, who arrived in Vladivostok on the clipper "Abrek".

The first civilian of the young Vladivostok was Ya.L. Semenov, received from E.S. Burachka in March 1862, the permit to build a house and outbuildings. It is from 1870 to 1875. was the first public warden of Vladivostok in which he lived 52 of the year. The retired naval second lieutenant, M. Fedorov, was the first to be elected head of the City Duma. 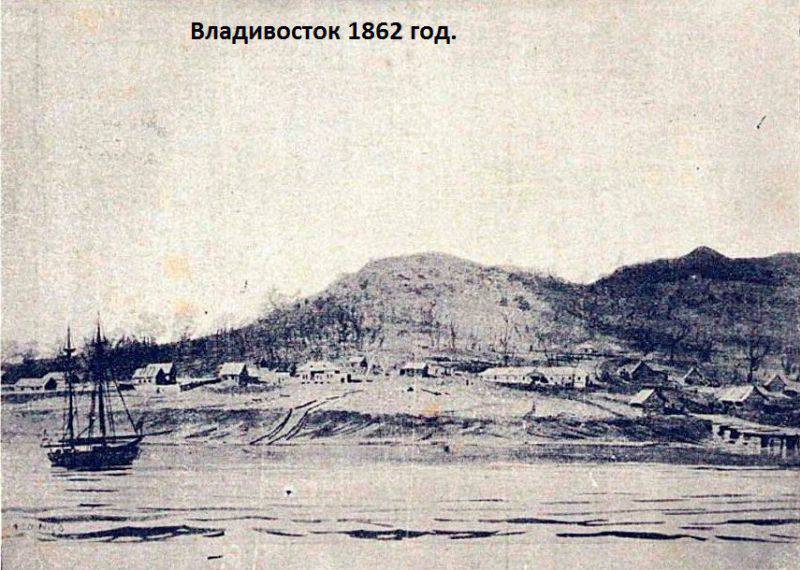 In 1864, all the harbors of Peter the Great Bay were subordinated to the head of the southern harbors in Vladivostok. In the port, a military team and a small civilian population were headed by a port commander, to whom a civilian official in charge of civil affairs was seconded.

By 1868, around 500 military and civilian people lived in the city. Along the north coast of the Golden Horn Bay, one officer and a half lasted were the officer wing, the soldiers' barracks (line and artillery), a mechanical facility for repairing ships, various warehouses, about 50 state and private houses, and about 20 Chinese fanz. 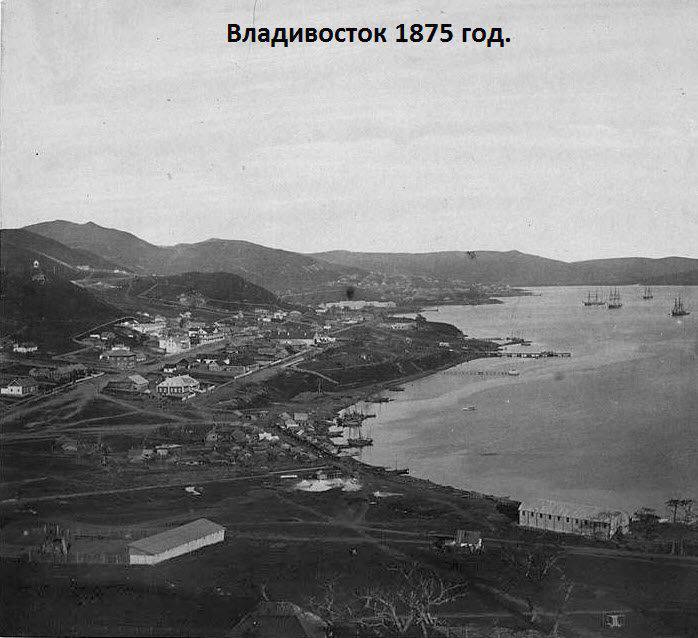 Life in the city gradually revived. By 1879, 7300 people lived in it, among them 3184 soldiers. The port was built 493 residential buildings, including 18 stone. The 1876-1877 built the first coastal batteries. Ships of the Siberian Flotilla and the Pacific Squadron continued geographical research of the shores of the Far East. Gulf America, Shooter, Abrek Bay, Rogue, Novik, Dzhigit, Askold Island, the main street of Vladivostok, first American, and then Svetlanskaya, and others, owe their name to the corvettes and clippers of the flotilla and squadron. Posyet Bay, Putyatin Island, Skryplev Island, Shkot Peninsula, Cape Egersheld, Shefner Street and others are named after the commanders of ships and detachments.

In 1879, the first steamboat of the Voluntary Fleet arrived from Odessa in Vladivostok, and a permanent message was opened from 1883. Since 1880, a permanent maritime transport link has been established between Vladivostok and Kamchatka, Sakhalin and Okhotsk. From 1885 to 1905, the Voluntary Fleet delivered over 300 thousands of soldiers, displaced persons, exiles to the Far East, and also transported up to 5,3 million tons of various cargoes annually. In 1883, the post of head of resettlement in the South Ussuri region was even established. Its first head was F.F. Busse. In 1884, he also became the first chairman of the created Society for the Study of the Amur Region.

In June 1880, by order of General-Admiral Vladivostok, was allocated from the Primorsky Region to the General Government and was officially called not a port, but a city. The governorship included the port, the city, the peninsula of Muravyev-Amursky, as well as Russky Island.

In December 1883 of the year, Admiral I.A. The Shestakovs allowed the publication of a local marine newspaper, and December 29 released its first issue (until the end of the 19th century, it was published on Sundays). N.V. was the first editor and publisher of the marine and social-literary newspaper "Vladivostok". Sologub.

In 1890, the Society for the Study of the Amur Region organized a museum (now it is the Primorsky State United Museum named after VK Arsenyev). The construction of the museum building was led by N.V. Sologub. Rear Admiral S.O. worked in this museum in 1895. Makarov, who at that time was sailing around the world on the Vityaz corvette. 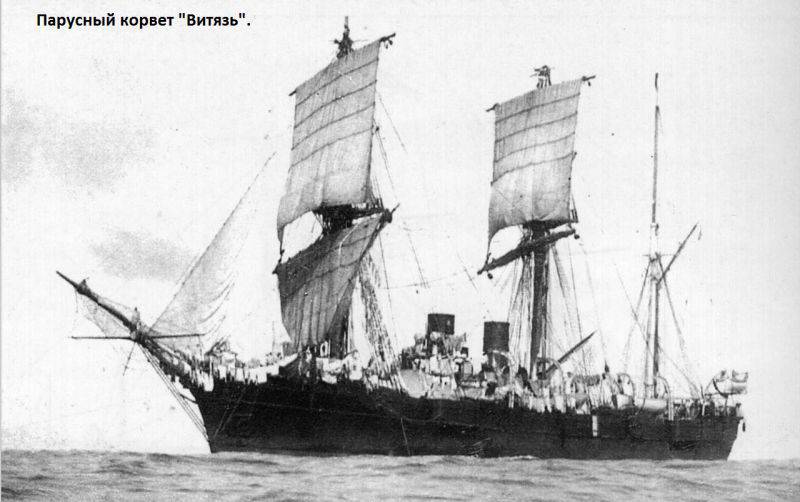 In the same year, at the insistence of the sea minister, a decision was made to expand the port of Vladivostok to anchorage of the Pacific squadron here, whose numbers increased to 12 ships. From 1888, Vladivostok received the status of the administrative center of the Primorsky region, and in 1889, it was declared a fortress.

In 1883, the Mechanical Plant of the Marine Ministry (now Dalzavod) began to be built to repair the ships of the Pacific Squadron and the Siberian Flotilla, and in 1887, the plant became operational. A floating crane was built on it a year later, and another three years later a floating dock was installed. In 1897, the plant completed the construction of a dry dock (now Dock No. 3 Dalzavod), which received the first ship for repair - the cruiser Dmitry Donskoy.

By the early nineties of the XIX century, the city remained primarily the Pacific outpost of Russia and was located along the northern coast of the Golden Horn Bay, as well as on the Shkot peninsula and reached the First River. While the city mostly remained wooden. In 1893, the first city power station was launched. In the spring of 1891, Vladivostok laid the foundation for the Ussurian railway. And two years later, the train already went to Khabarovsk.

In winter, 1893, in the Golden Horn Bay for the first time, began icebreaking work with the Steamboat steamer. Four years later, the military port received an icebreaker "Nadezhny". In November, 1899-st opened a sea channel to Novik Bay on Russky Island.

The aggravation of Russian-Japanese relations at the end of the XIX century forced Russia to take measures to strengthen the Far Eastern borders. The Pacific squadron, still being formed by interchangeable ships of the Baltic Fleet, grew in 1895 year to 27 ships. In connection with the increase in the squadron’s strength in Vladivostok, construction began on two more dry docks in the area of ​​Rotten Ugol (completed in 1906). 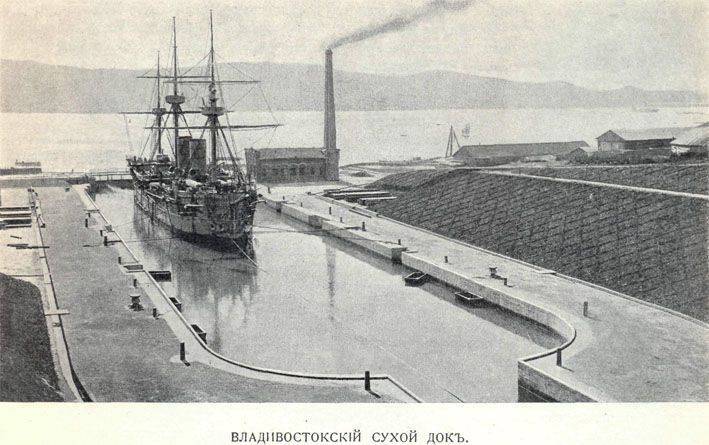 In 1896, the government decided to build a commercial port in Vladivostok on the Shkota peninsula at Cape Egersheld. Two years later, construction began on port facilities and office buildings. In 1903, direct rail links opened to the western regions of the country. The Vladivostok commercial port in combination with the Siberian Railway was Russia's natural access to the Pacific Ocean. At this time, 31150 people lived in Vladivostok.

After the declaration of Vladivostok as a fortress (in 1895 year), a city defense plan was developed, developed by Colonel K.I. Velichko. For the beginning of the Russian-Japanese war for the defense of the city on the Muravyov-Amursky peninsula built forts Linevich, Suvorov and Muravyev-Amur, seven strongholds with an earthen defensive fence between them, forts and nine coastal batteries, and on the island of Russky - land forts and 13 coastal batteries.

The defeat of Russia during the war with Japan forced to decide on the further strengthening of coastal fortresses, including Vladivostok. Approved in 1909 year new construction plan of the fortress, provided for the construction of two fortresses: on p. Muravyev-Amur, and on. Russian. The last one, almost completed by 1918, was recognized as one of the best seaside fortresses in the world. It consisted of 16 forts, 11 strongholds, 11 underground cellars, 23 fortifications, 21 anti-paratroopers and 31 coastal batteries with 1400 guns. The main builder of the fortress was an engineer - Major General A.P. Shokhin.

After 1905, the Siberian military flotilla with the main base in Vladivostok remained in the Far East. By the beginning of World War I, it consisted of two cruisers, the Askold and Zhemchug, a mine brigade of 24 destroyer and destroyer, 13 submarines, a cannon boat, two mine barriers, five patrol ships, other ships and ships. For the repair of warships and ships of the flotilla, the Vladivostok military port had three dry docks. In the bay Ulysses equipped three stocks and built a workshop for assembling destroyers. 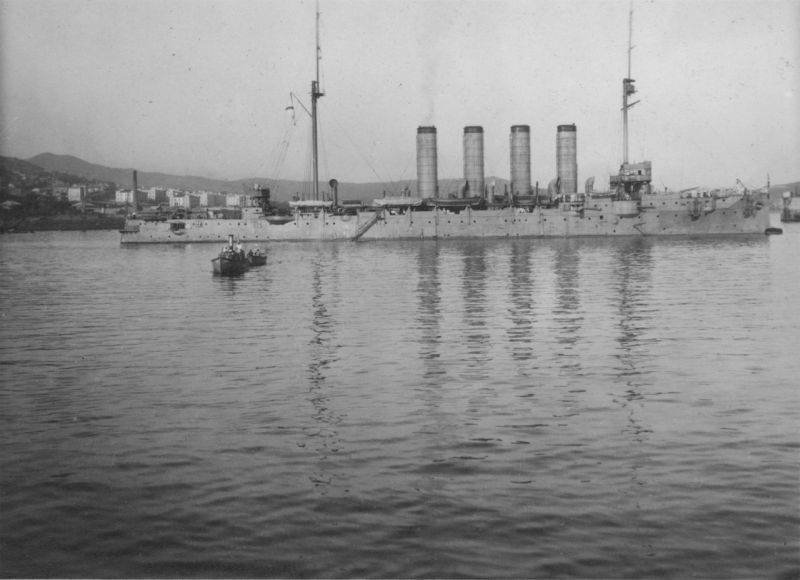 Stone construction unfolded in the city. The building of the headquarters of the Siberian Flotilla, the post office, the theater, the Oriental Institute, the commercial school, the railway station, the city hospital, trading houses and shops, many residential buildings were erected. In October, a tram was let out in 1912.

During the First World War, part of the Siberian flotilla ship were transferred to the European seas. The war entailed the almost complete disarmament of the Vladivostok coastal batteries and the sending of guns to the west.

In December 1917, the Siberian flotilla went over to the side of Soviet power. But in July, the 1918-th ships of the flotilla (14 destroyers and a number of auxiliary vessels) were captured by the invaders. In the autumn of the same year, at the direction of Vice-Admiral A.V. Kolchak in Vladivostok restored the military flotilla. The general command of the Far Eastern naval forces was assigned to Rear Admiral S.N. Timirev, and in the spring of 1919, to Rear Admiral M.G. Fedorovich. A radio school opened in the city, a naval training team was formed. The midshipmen of the Marine Corps, the Marine Engineering School, and individual midshipmen classes in practical navigation outside of Russia, as well as the fleet junker, arrived in Vladivostok. In the Shefnerov barracks restored Maritime School. 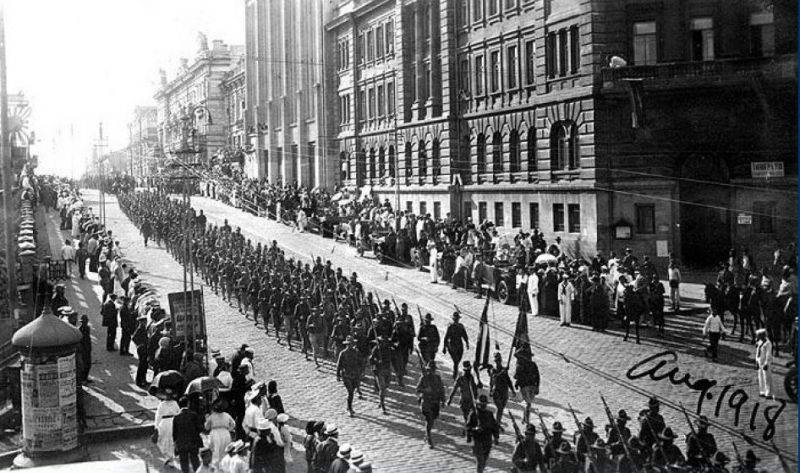 18 On June 1921, Rear Admiral GK took command of the Siberian Flotilla. Stark He was entrusted with defending Vladivostok and the coast of the Tatar Strait, organizing the fight against partisans and the defense of Kamchatka, protecting crafts and forest wealth in the coastal area, delivering cargo and replenishing troops to the shores of the Sea of ​​Okhotsk.

When the Red troops approached Vladivostok in October 1922, preparations for the evacuation began hastily. A detachment of transports was formed from private ships, steamboats of the Voluntary Fleet and ships of the flotilla. In 23 hours of October 24 1922, Vladivostok on the ships of the flotilla was left in white parts. It was a new time, a new era. 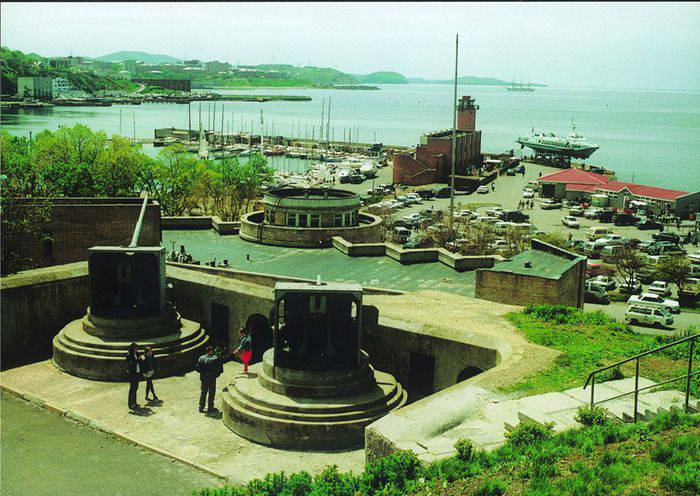 Ctrl Enter
Noticed a mistake Highlight text and press. Ctrl + Enter
We are
To whom do we owe the accession of the Far East and why do liberals try to forget this person?Kolchak's liquidation
35 comments
Information
Dear reader, to leave comments on the publication, you must to register.