December 30 2015
55
2015 year in our country has passed under the sign of 70-year anniversary of the Great Victory. May 9 on the Red Square of the Russian capital held a grand parade, which was involved and the latest Russian military equipment. One of the most significant events is the action “The Immortal Regiment”, which gathered millions of citizens of the country, took to the streets of cities and villages with photos of their ancestors who participated in the Great Patriotic War or forged victory in the rear.


As soon as the people of Russia demonstrated true unity, which, in fact, is the main national idea in the country, the “mental agony” of the ultra-liberal panopticon began. For reasons quite natural to them, the liberal "friends" could not remain aloof from what was happening, but only this very thing "not to be left aside" was understood by grantee members in its own way. The next “one rifle for three” and “oh” style came, what would you say now, if it were not for General Frost in 1941 ... “Heavy rains connected with the programs after the“ Immortal Regiment ”action schoolchildren throwing portraits of veterans in the trash cans. "
Even the photos were not too lazy to concoct ... In general, the kunstkamera began to move, because the grantors would not understand if their players were silent - the notes to be allocated must also be worked out ...

Further, the “mind, honor and conscience of liberal marasmus” joined Ms. Latynina, who was broadcast on May 9 on the Echo of Moscow radio station in the author’s program “Access Code”, in which she explained “how it was in reality” ... As Ms. Latynina herself thought, it was she and only she (and not some military historians there) who need to be trusted by modern Russians. Trust to know all the secrets of the Great Patriotic War, which, according to the liberal motto spattered with saliva and snot, is “not so great and not completely domestic, for the Soviet Union was saved, of course, by Lend-Lease, and not by some kind of heroism ". 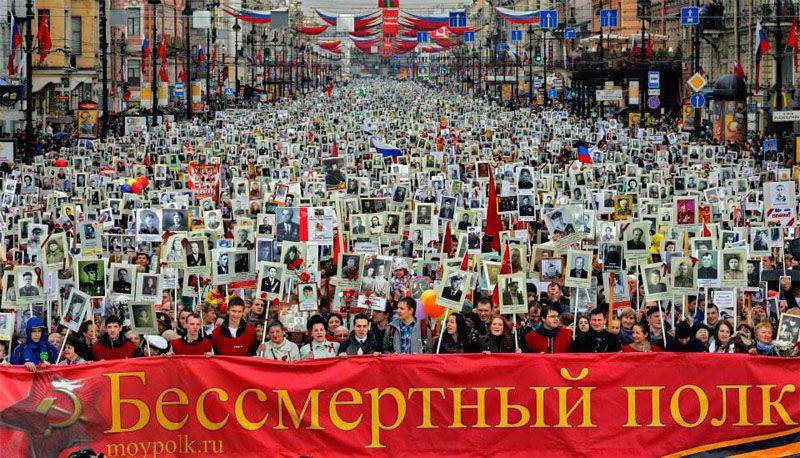 So, the Latynian speaking hair told that, it turns out, “there was no blockade of Leningrad”, and that it was somehow stupid to believe in Soviet military “mythology” ... As a result, Latynina’s speech was reduced to the usual: “tyranny of Stalin” and “bloody Gebnya. Nothing new, of course, no one who knows in which direction the Latin hairstyle is swaying, did not hear, and therefore, it would seem, there is no point in discussing these pseudo-historical ones that claim to be something. However, Latynina is not the only one in the country. Forgive me, Lord, legion - those who are ready to trample on the dignity of the winners, sitting in an easy chair over a cup of coffee and arguing on the topic of "how it was necessary to fight."

And the subject matter for this kind of feces is the most diverse: from “about the blockade of Leningrad, they all lie” to “there was no Panfilov feat near Moscow”, from “soldiers drove into battle exclusively outside the battalions” to “2 million German women raped by Germans”. And all this false filth is “proved” almost with foaming at the mouth with links to the next pearl Svanidze, then to the notes of the late Valeria Ilyinichna Novodvorskaya ...

However times when level historical the awareness of the population depended solely on the number of publications on the theme of the Great Patriotic War of such gentlemen as, for example, B. Sokolov, passed or almost passed. It should be noted that numerous creative associations have been formed in Russia that put barriers to ultraliberal attempts to falsify history. One of such creative associations is completing the process of creating the film “28 Panfilov’s”, which was shot primarily on the basis of folk remedies - funds raised during a large campaign that allowed us to collect more than 34,5 million rubles from future viewers.

The preparation itself for the creation of the film, about which a lot was written, took place under conditions when attempts to spread dirty myths about the “made-up history of the Panfilov Division” were undertaken by various interpreters.

In November, the creative team of the film “28 Panfilov”, which around it managed to gather the most real patriotic public association, sent a letter to the President of Russia. The letter emphasized the need to counteract attempts by notorious forces to strike at the fundamentals of national identity, the principles of national identity. From the letter:

Dear Vladimir Vladimirovich! Since 2001, the incessant controversy between military historians and officials of the archival departments Mironenko and Artizov on the issue of the reality of the Panfilov Guardsmen’s efforts has been continuing. With particular cynicism, arguing their position only with the 1948 archival certificate of the interrogation (and we know how the interrogations were conducted in Stalin's time) of people who were not even in the division at the time of the decisive battle near Moscow, they demand that the rest of the archive documents, facts and evidence of local residents of the villages Nelidovo and Dubosekovo about the feat of the division of Ivan Panfilov. It is sad that in our difficult times there are people who are ready to turn the story around to please their own ambitions, defame the names of the heroes who defended Moscow at the cost of their lives. The feat of 28 Panfilov mercilessly desecrated, as desecrated monuments to the Soviet soldier-liberator.

Next, the creative team and the initiative group write in the social network:
For our part, of course, we cannot and will not stand aside, but we do not expect anything. We just signed up. And we continue to work on the film-monument "28 Panfilov." Together we can do everything. And if we can, then we will.

Indeed, attempts to misquote history and mix with the dirt the very image of the Great Victory is a completely tangible task that “friends of Russia” are trying to solve by all means with the help of “special circles” financed inside Russia. If we didn’t react to these attempts, then tomorrow or the day after tomorrow we (Russia) may be confronted with what neighboring Ukraine faced, for which the memory of the feat of a single Soviet people, too, seemed to be immortal. And we will begin to tear down the monuments of the young, I'm sorry, utyrki in balaclava and with bats. And we will start on the graves of Soviet soldiers to depict the derivatives of the badges of the Nazi divisions, while breaking the gravestones themselves. And we have "new" parliamentarians will begin to adopt laws on the "feat of Vlasov" ...

On the question of the existence of statements by a certain circle of people that there was no Panfilov feat, and also about why patriotic cinema was to Russia, Dmitry Puchkov (the notorious Goblin) spoke out not so long ago. Dmitry Puchkov’s reflective footage (for http://politikh.ru):

One conclusion: do not need to try to prove something to someone. Especially "our" liberals ... What is the point of entering into polemics with Latynina, Sokolov or Svanidze, if for these people the freedom of speech itself consists solely in the format of the opportunity to freely lie, while making a smart appearance. After all, they themselves believe in what they say, as they believe in their infallibility. You just need to work and do not forget to acquaint our younger generation with history. Moreover, it is not occasionally to acquaint, but systematically, so that it goes, as they say, for the future.

At the end of the material, I would like to express my gratitude to the team working on the film "28 Panfilov", since it is thanks to such enthusiasts that the truth about the war will not be either slandered by "echoes" or washed away by the "rains".