The end of the Turkish freemen in Abkhazia?

December 29 2015
34
Today, December 29 Assistant to the President of the Russian Federation Vladislav Surkov begins his visit to the Republic of Abkhazia. The central event of the visit of Vladislav Surkov will be his personal meeting with Abkhaz President Raul Khadzhimba. The official bill of the visit is the integration of the two countries, an increase in commodity turnover, the implementation of economic projects, including the restoration of the republic’s transport system, which was seriously affected by the Tbilisi aggression.

The visit’s agenda includes discussion of issues of bilateral cooperation in the light of the implementation of the Treaty between the Republic of Abkhazia and the Russian Federation on alliance and strategic partnership. 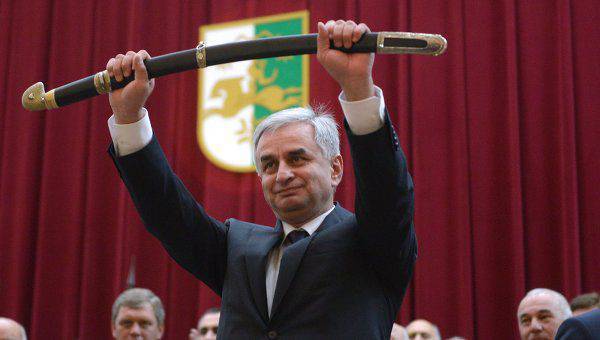 However, the visit has an informal subtext. And given that Surkov’s personality in our country (as it happened) is shrouded in a very peculiar aura, then numerous Russian political scientists decided to practice the prediction of the nature of the informal negotiations.
So, the day before in an interview with an information agency Interfax Alexei Chesnakov, director of the political conjuncture, said that adviser to Vladimir Putin, who has a wealth of experience in political (including foreign policy) activities, is arriving in Sukhum to make a special offer to the authorities of Abkhazia. This is a proposal to support official Sukhum imposed economic sanctions imposed on Turkey by the Russian Federation.

It is worth noting that on Monday 28 December, Vladimir Putin signed a renewed “sanction” decree that introduces new restrictive measures against the Turkish Republic. In particular, we are talking about the fact that all those companies in which Turkish capital is present to one degree or another are now under Russian sanctions.

In this regard, it is indeed possible to assume that the visit of Vladislav Surkov to the President of the Republic of Abkhazia is connected precisely with the measures of economic impact in relation to Turkish “partners”. The fact is that almost all companies operating in Abkhazia, one way or another connected with Russian financial investments. Either they are registered under Russian jurisdiction by Russian citizens. Moreover, in the republic financial transactions are conducted on the basis of using the Russian ruble. So, if there is Turkish participation in them, too, then they fall under the sanctions. But Turkish participation is very much ...

The position of Turkish business is very strong in Abkhazia. If you believe the statistics, then about 18% of the republic’s foreign trade falls on Turkey. One of the leading areas of cooperation is the construction industry and fisheries. Moreover, this fishing is carried out by Turkish fishing vessels. Approximately 80% of fish caught in the waters of Abkhazia, namely the Turkish "part".

Just a couple of days before the information that an adviser to the Russian president was sent to Abkhazia, information appeared on the presence of the Russian fishing fleets in Abkhaz waters. First of all, this concerns the receipt of fishing quotas by Russian fishing vessels in the marine economic zone of the Republic of Abkhazia. Attention is drawn to the fact that until now, Abkhazia has not allocated quotas for fishing by Russian companies.

During the press conference held on December 25 in Moscow, the head of the Federal Agency for Fishery, Ilya Shestakov, said this:
After January 10 (2016) our vessels will go fishing, we agreed to allocate a quota of 15%, but according to our capabilities we can provide a catch of up to 60-70% of fish caught in the Abkhazia zone. But there are a number of problems related to the fact that almost all the fish that was previously harvested by Turkish vessels was supplied to flour mills in Abkhazia, which were owned by citizens of Abkhazia and Turkey, and the purchase price of this fish was low. For our fishermen, this is not an appropriate option, since the costs are quite large. We agreed with the Abkhaz leadership on pricing opportunities so that the price was the one that suits.

According to preliminary data, about 6 thousand tons of fish (mainly Khamsova) can now be realized in Russian ports. These are the 15% quota mentioned. If the quota reaches 60-70% under conditions that are suitable for Russian fishermen, then Turkish “partners” will have to leave this segment of the Black Sea, which will lead to tens of millions of dollars in losses for Turkish companies. But at the same time, Russia, naturally, needs to take into account the interests of Abkhazia itself.

However, not only the “Turkish issue” can be discussed in, if I may say so, the informal context of the meeting of Vladislav Surkov with the Abkhaz leadership. There is, after all, a much more acute question for the same Abkhazia: the issue of relations with Georgia. The fact is that many Abkhazians, including those living in Russia, as they say, have become tense when they heard the answer of Russian President Vladimir Putin to a Georgian journalist during a big press conference. It must be recalled: Vladimir Putin then declared that, in principle, he was ready to consider in the near future the question of the possible abolition of the visa regime with Georgia, and also that he would take "any choice of the Abkhaz (and South Ossetian) people" in terms of restoring relations with Georgia . The Abkhaz have perceived such statements, to put it mildly, ambiguous. People remained at a loss: either President Putin is cunning, or he is really ready to follow the path of rapprochement with Georgia at the expense of some “ambiguous ideas” on the same status of Abkhazia ...

Apparently, Vladislav Surkov is faced with the task of explaining to the Abkhaz leadership the situation in this direction as well. And it will be necessary to explain against the background of an interesting fact: since Abkhazia became an independent state, foreign “investors” have significantly increased support for Georgian non-governmental organizations, for which the slogan “Georgian-Abkhaz friendship has become stronger day by day”. Despite the fact, for obvious reasons this slogan and its derivatives in Abkhazia cause a gag reflex, Western “friends” do not see a reason to curtail the support programs for specialized (read - anti-Russian) NPOs. The British Society of Reconciliation Resources and the so-called International Alert have intensified their activities, through which tens of millions of dollars are being pumped in an effort to weaken the pro-Russian attitude of Abkhazia. For obvious reasons, there is also a Turkish interest in supporting NGOs working on this kind of weakening and at the same time on Georgia’s admission to NATO. It is quite clear that if there is even a hint that Russia avoids the problems and aspirations of Abkhazia and its people (a considerable number of which, by the way, are Russian citizens), then this will become a wormhole of the Russian outpost in the South Caucasus. And to lose outposts in the current conditions (and indeed) is by definition inadmissible.

Ctrl Enter
Noticed oshЫbku Highlight text and press. Ctrl + Enter
We are
The Treaty of Abkhazia and Russia did not like NATORussia and Georgia: traps from "well-wishers"
Military Reviewin Yandex News
Military Reviewin Google News
34 comments
Information
Dear reader, to leave comments on the publication, you must sign in.