Archival documents about the exploits of 28 ...

December 31 2015
147
But you know yourself: senseless mob
Changeable, rebellious, superstitious,

Easily empty hope betrayed,
To instant suggestion is obedient,
For the truth is deaf and indifferent,
And she feeds on fables.
(Boris Godunov. A.S. Pushkin)

Not so long ago, among the VO publications, there appeared material about Panfilov's heroes, the essence of which is that there are certain eyewitness accounts that these events confirm. However, no one argues with the fact that the division fought heroically. Another thing - the actual "feat 28"! They began to hotly discuss the topic, and some argued that any doubt in its reality was the machinations of the enemies of Russia, while others justly argued that it would be enough to be a rabble that feeds on fables coming down from above to make it easier to rule the people! 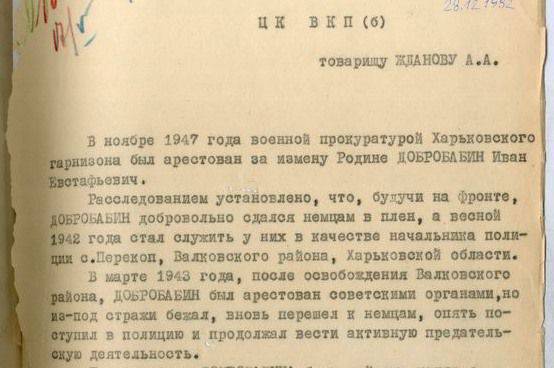 But remember the ancient philosophers. What did they say and warn about? Confucius said, for example: "Teaching without thinking is useless, but thinking without teaching is dangerous." What does it mean? Yes, very simple! What is the use of arguing on the basis of information from the “OBS Agency” (One woman said) or the DMS (One Man Nabolt), that is, on the basis of incomplete knowledge. How to check this "man" or this "woman"? That is, in order to speak out on the merits, you need to at least know him, and not at the level of a school textbook, but at the level of ... let's say - quite authoritative and deep, that is, at least read the original source: articles in the newspaper Red Star and Truth. However, this source also represents in this case a purely historiographic document, after all, this was written by a journalist, whom we must also believe in the word! But we believe, because it is understood that there are documents, numbers and facts behind the journalist’s words that you can go and check if you wish. That is, the documents stored where? In the archive! Moreover, the archive archive strife. There are local archives, where very often there is a lack of documents and there are central ones, where storage is delivered in a completely different way.

We have become fashionable to repeat the catchphrase phrase: “things in the studio,” which, however, is not bad at all. Because it indicates that people have become smarter and only one word is no longer trusted. As they say - "trust, but verify." That is, they need numbers of archival files, photocopies of documents - in a word, everything is as it should be! And I must say that such a test, even in the 1948 year, that is, in strict Stalin times, was taken up by the USSR Military Prosecutor’s Office. Reasons for checking information about the "feat 28" she had. Without reason (and serious!), Such a thing would not have started at that time.
Well, the result of its verification was a document that I would like to bring on the VO pages, moreover, in the form of photocopies, that is, as if they themselves were in one of the most important archives of the country and saw this business with their own eyes. 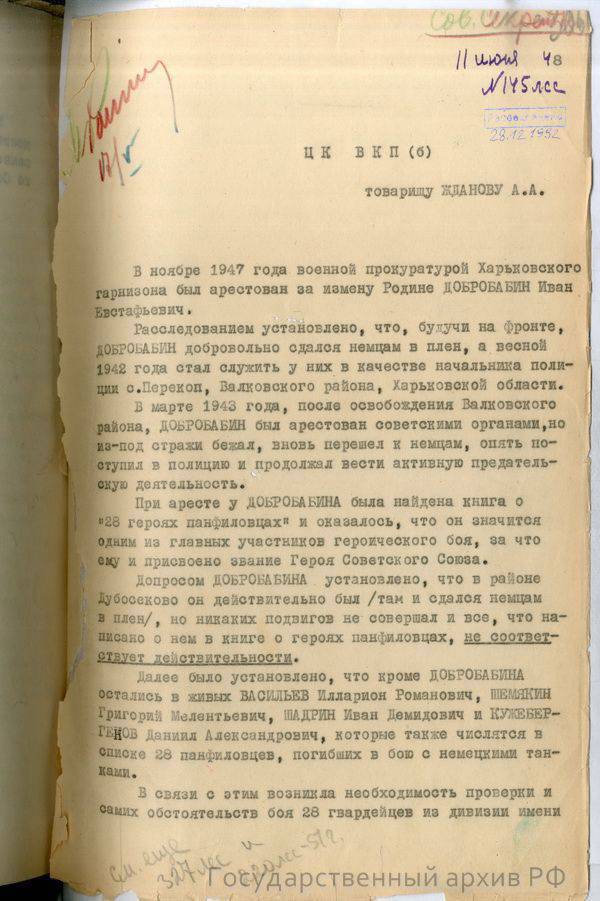 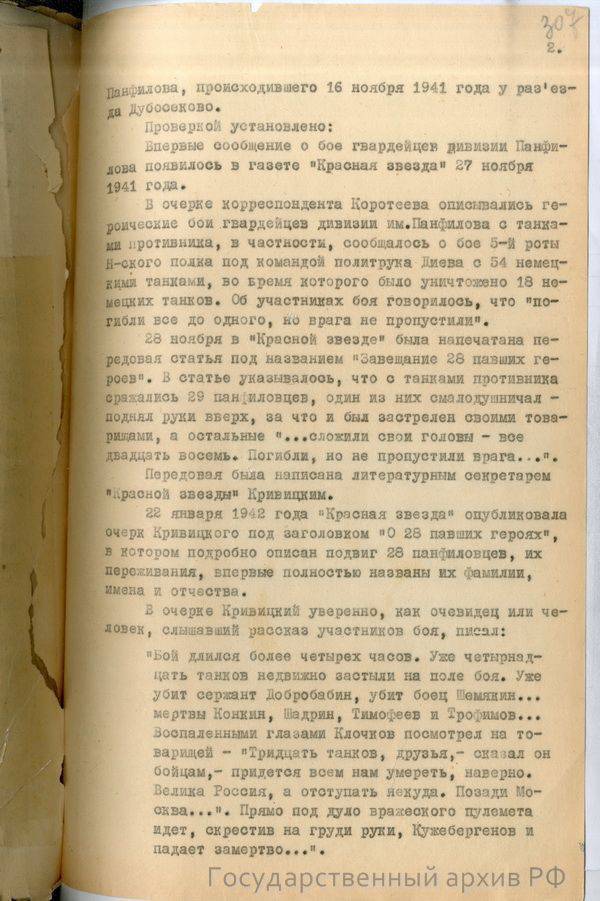 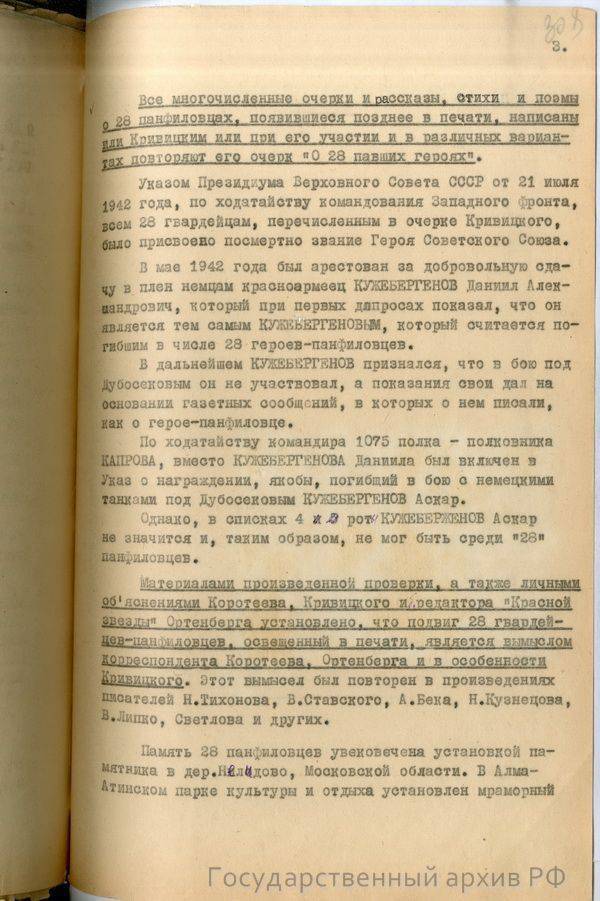 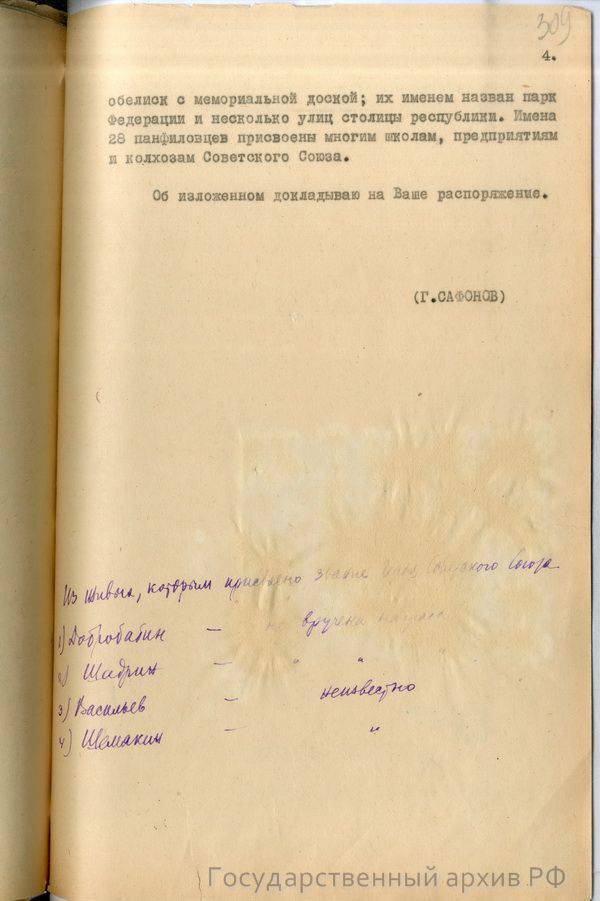 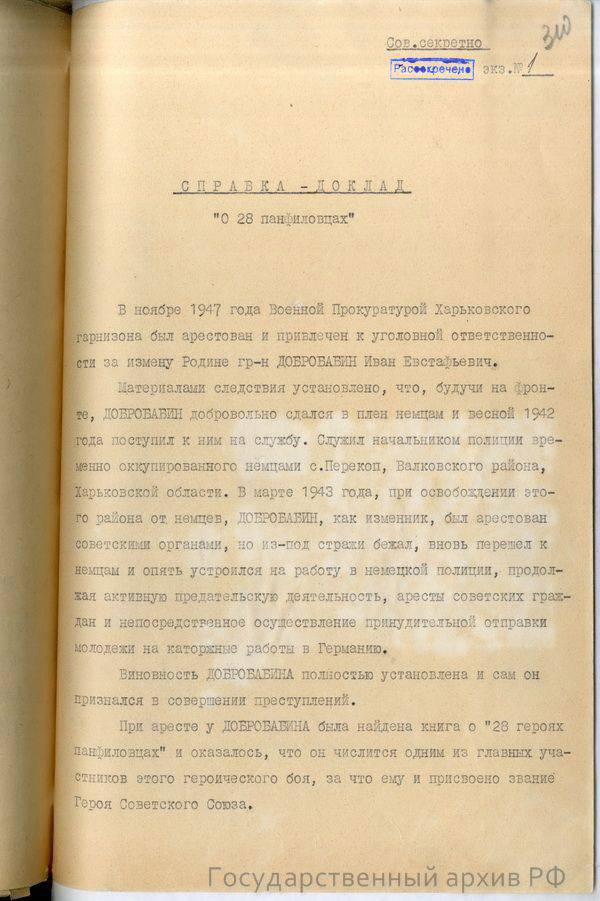 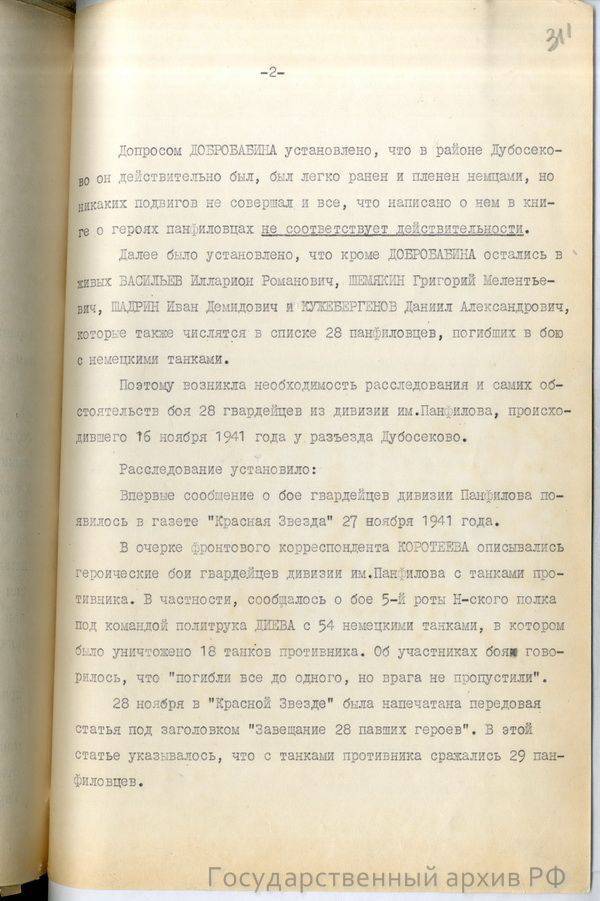 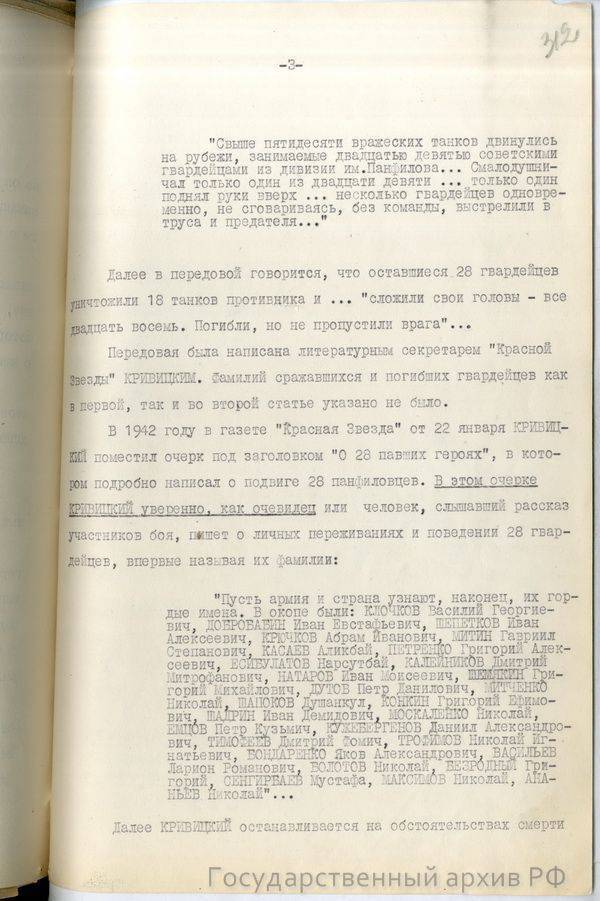 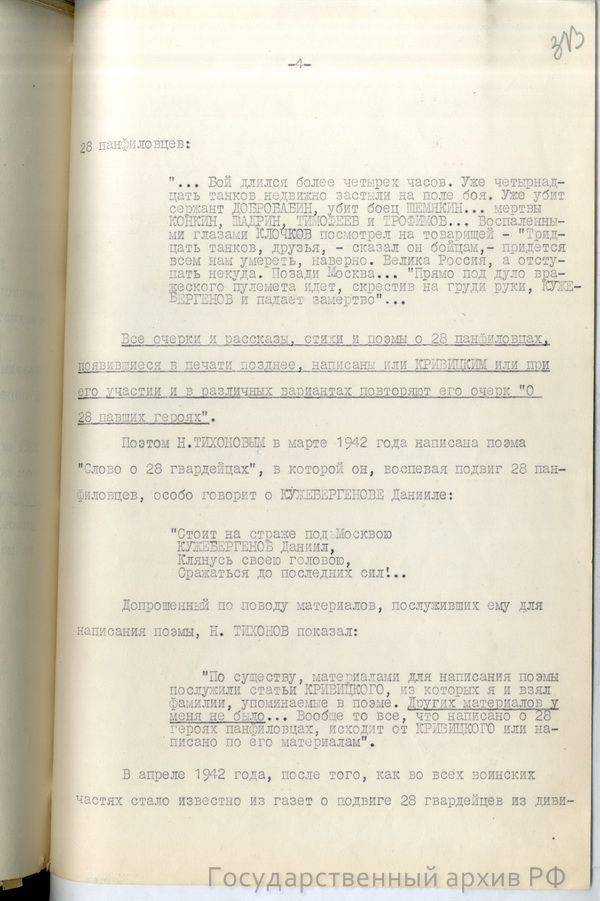 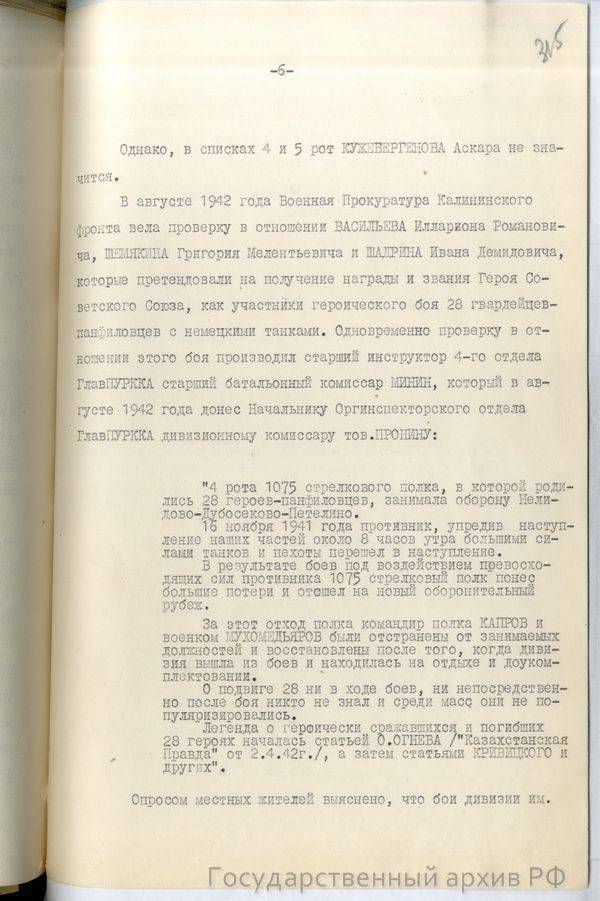 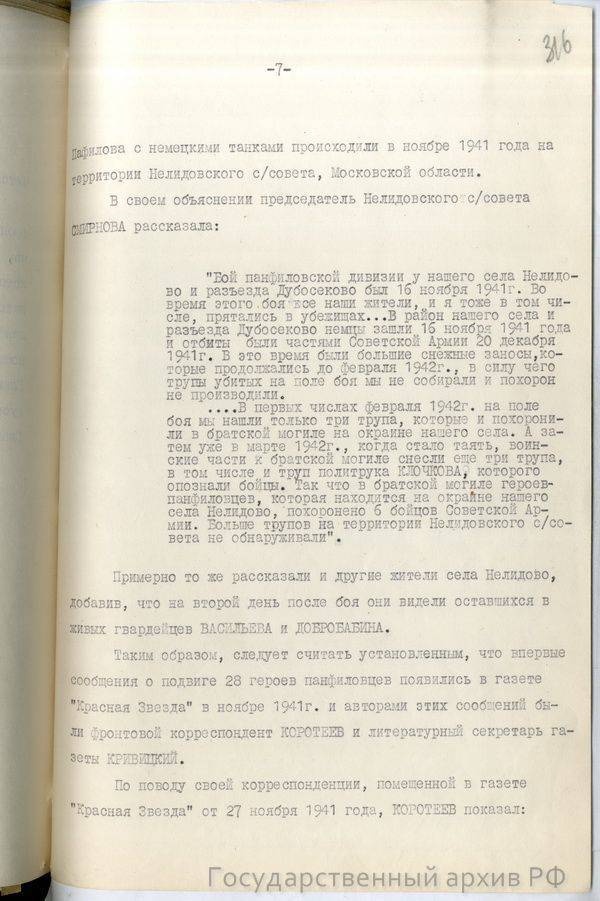 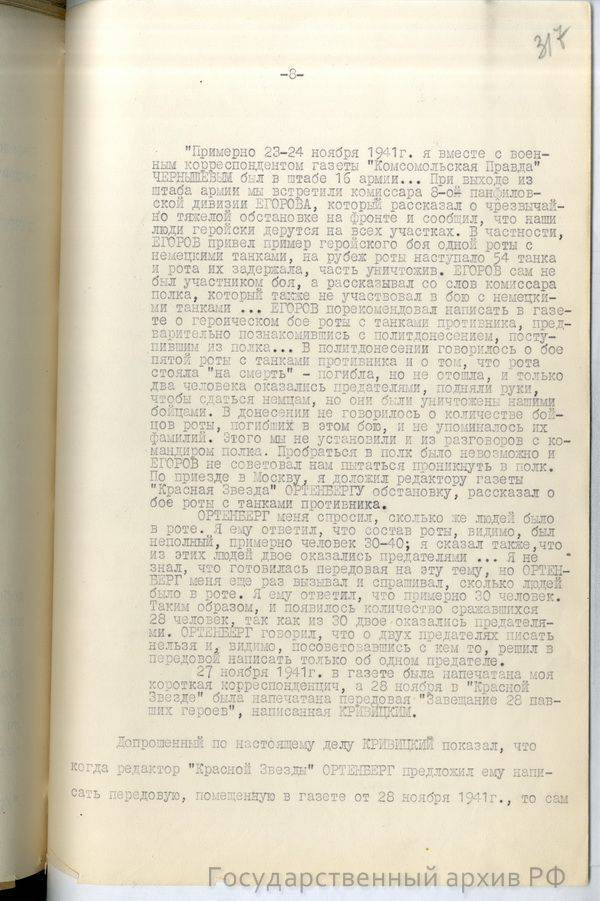 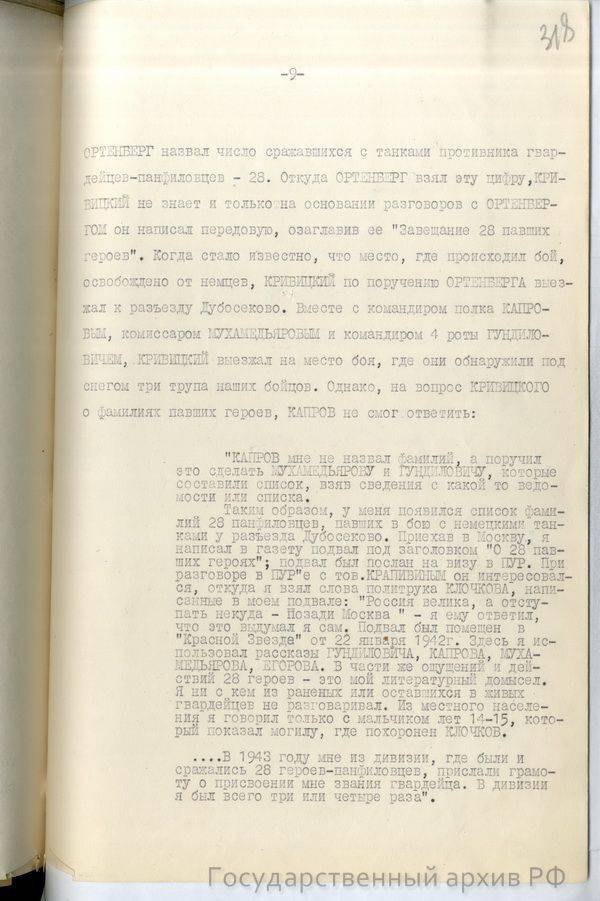 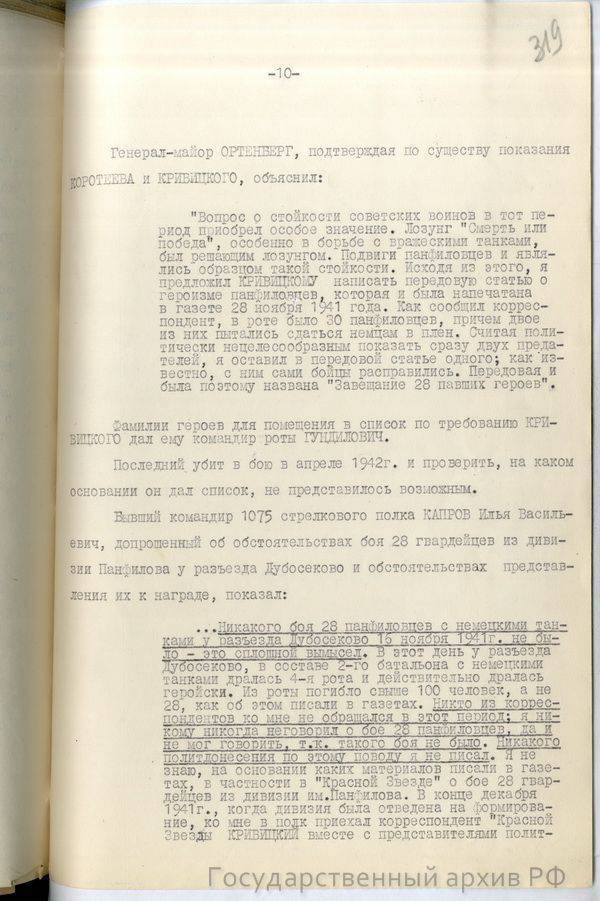 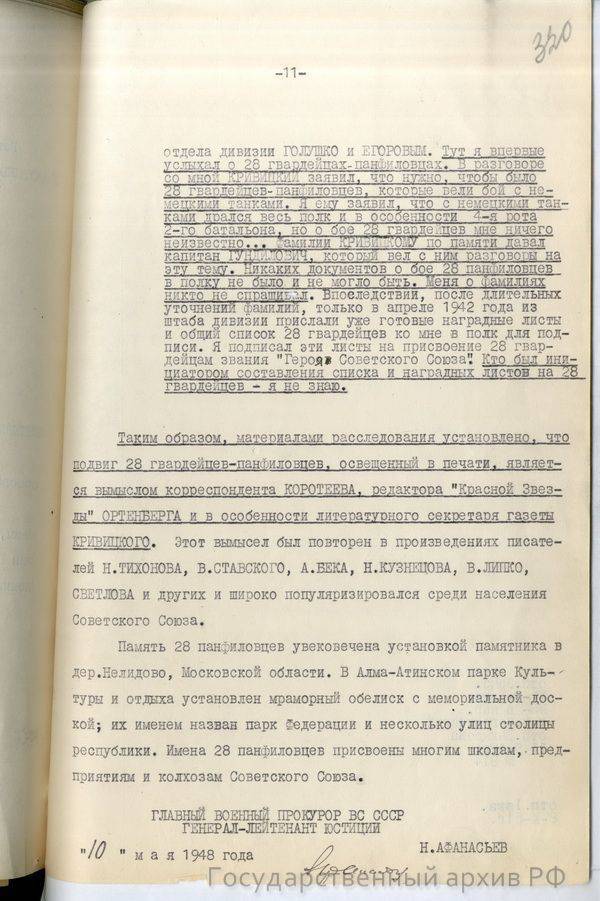 Well, the conclusion ... The conclusion is this: all the secret someday always becomes obvious. But the particular, albeit in something unsightly, does not negate the general, of which this private has always been more at times! In 1948, they still did not understand this, they believed that the “sweet lie” was nicer, more useful than the bitter truth, and thus laid the “information bomb” under our present time in a certain sense. Naturally, there were immediately the people who took advantage of this, using the demagogic method of generalization. Well, everyone came across this too: “All workers are drunkards!”, “All officials are thieves!”, “All teachers take bribes!” And so on, although, in theory, everyone should understand that this is impossible in principle. And just as it is necessary to understand that the truth about the “feat of 28” of the very feat of our people does not diminish at all and does not cancel, because this is just a particular that it would be completely wrong to generalize!