December 23 2015
32
On Tuesday in St. Petersburg in the territory of the "Northern Shipyard" (included in the USC) was the installation of a foundation stone, symbolizing the beginning of the construction of a modern shipbuilding complex, the blog bmpd with reference to the press service of the enterprise.

“Today we are not just installing a foundation stone with a memorial plaque. By this action, we are, in fact, starting a new era in what will be the technical re-equipment of USC enterprises. As a result of the project, the production volume at the Severnaya Verf should increase multiply, new opportunities will open up for the construction company, first of all, warships and, of course, we expect this shipyard to have a dual purpose and successfully build civilian vessels. ” , said at the opening ceremony USC head Alexei Rakhmanov. 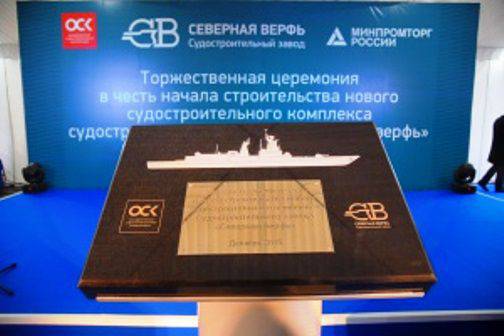 In a press release, the company says:

“The bookmark marks the beginning of the implementation of a large-scale investment project for the reconstruction and modernization of existing facilities of the Northern shipyard with the aim of creating a modern shipbuilding complex.

The new complex will:

To reach the modern level of automation and mechanization of production processes in shipbuilding, as a result of which it will be possible to build a wide range of ships and vessels (including large-tonnage), as well as the ability to respond flexibly and quickly to market demands;

To carry out ship assembly work with large blocks using heavy-duty cranes, performing the bulk of the work in enclosed spaces, which will make it possible to reach the world level in the field of economy and efficiency of shipbuilding;

The project envisages the construction of a dry dock (400 m in length and 70 m in width), covered with a slipway, new buildings of production workshops, as well as reconstruction of engineering and transport infrastructure objects. The most modern lines for cutting metal and profiles, robotic welding complexes, as well as painting chambers for sections and blocks will be installed at production sites.

All design solutions will meet modern technology requirements, as well as legislation in the field of ecology and industrial safety. The project will increase production output, increase labor productivity, and reduce the time needed to build ships and vessels. Reduction in the number of shipyard staff is not planned.

Funds for the project are planned under the Federal Target Program.

The project is designed for four stages:

The 1 stage (2016 - 2017) includes the reconstruction of the western embankment and the construction of new engineering networks of the enterprise. Investments in the first stage of construction will be about 2 billion rubles.

The 2 stage (2016 - 2019) envisages the construction of the first stage of a dry dock with a near-deck area, covered by a slipway, with the installation of a Goliath-type crane with a lifting capacity of 1200 tons and two cranes with a loading capacity of 350 tons. Also at this stage new painting booths will be built. Investments in the second stage will be about 14 billion rubles. Passage of Glavgosexpertiza at this stage is scheduled for spring 2016.

The 3 perspective stage (2019 - 2021gg) includes the construction of a new housing processing plant and a metal warehouse. It is also planned to build a new logistics complex. The volume of investments will be about 15 billion rubles.

The 4 prospect (2022 - 2024) assumes the lengthening of the dry dock, the construction of a new two-span slipway, as well as the reconstruction of the extension quay. Investments at this stage will be determined by the results of the development of project documentation.

At present, the development of design and estimate documentation for the first stage has been completed. Design work and engineering surveys are being carried out in the second stage, the completion date of these works is the middle of 2016 of the year. ”

Ctrl Enter
Noticed oshЫbku Highlight text and press. Ctrl + Enter
We are
Severnaya Verf Shipyard will launch the third serial corvette of the 20380 Stable project in May
Military Reviewin Yandex News
Military Reviewin Google News
32 comments
Information
Dear reader, to leave comments on the publication, you must to register.