Russia has ceased to be a "main threat"

December 24 2015
27
The other day, the Council on Foreign Relations (USA) published an official document entitled “Preventive Priorities Survey: 2016” (“Preventive Priority Study, 2016 Year”). Experts rated potential threats to national security and US interests in the coming year. The primary “threats” are not connected with Russia, but with the Middle East. 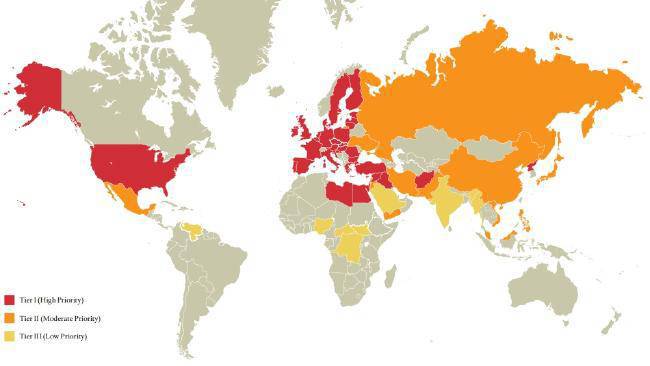 The priority for American politicians in 2016 should be to prevent the further escalation of the civil war in Syria. So say the leading experts who participated in the Council on Foreign Relations (CFR). This is celebrated in the eighth annual release. of the report Council on Foreign Relations (USA), entitled “Research Preventive Priorities, Year 2016”. The report summarizes assessments of possible threats to national security or US interests in the coming year.

According to analysts, the civil war in Syria is ahead of the conflict in Iraq and becomes “number one” in the list of “unrest”.

Invited CFR experts seek to assess conflicts by the degree of their influence on US national interests. During the study, almost a thousand “threats” were identified, the number of which was reduced to thirty in the evaluation process. Officials, scientists, and foreign policy experts ranked the threats. Three categories of hazards were created: high, medium and low.

The annual review sought to identify “potential areas of instability” and help US politicians to “foresee the unforeseen,” since certain “circumstances” could threaten the “national interests” of the United States. The study helps focus attention and resources on specific conflicts in the coming year, research leaders said.

Of the eleven “unforeseen” threats that have been assigned a “high priority” level, eight are associated with events unfolding or already occurring in the Middle East. One of eleven concerns the escalation of the civil war in Syria. Respondents also "increased" the degree of priority for the preservation of political power in Libya, political violence in Turkey and increased instability in Egypt. All three threats have risen from moderate priority (2015 year) to high (2016).

Among the unforeseen threats specifically introduced in the new survey was political instability in the countries of the European Union caused by the influx of refugees and migrants and increased tensions between Russia and the member states of the North Atlantic Treaty Organization (NATO).

Top priorities for preventing US conflict in 2016 include:

- escalation of the conflict in Syria;

- probable attacks with mass casualties in the United States or in an ally;

- political instability in the EU countries due to the influx of refugees and migrants;

- increased tensions between Israelis and Palestinians;

- the increase in political violence in Turkey;

- increased violence and instability in Afghanistan;

- problems in Iraq due to the territorial seizures of the self-proclaimed “Islamic State” and the continuing strife between sectarians (Sunnis and Shiites).

The three conditional threats that were included in last year’s review are unlikely to occur in 2016: armed confrontation in the South China Sea, renewed hostilities in eastern Ukraine and political instability in Nigeria due to the activities of the Boko Haram group. So say the researchers.

As for Russia, it is not among the "priority" threats. Escalating the conflict between Russia and Ukraine, the list has been assigned only “medium” status. The reason for this decision was a truce in the Donbas.

So, Russia has ceased (at least officially) to be "enemy number one" for the United States. What do the experts think about this?

"Now, when Russia, in the same way as the United States, is distracted by Syria, respectively, there can be no immediate danger from it," said "Free Press" Associate Professor of the Department stories and politicians of Europe and America MGIMO Andrei Kryzhanovsky. - And both sides are interested in the speedy end of the war. Another thing, of course, is that the United States has its own goals. And they want to try with the hands of Russia to bring the Syrian opposition to power. But this is a separate question. And that is why the Syrian stake ... The Middle East rate in this global game is much higher than the imaginary threat from Russia. "

According to the expert, the potential threat can not be discounted. The United States "managed to draw Russia into the war in Syria - and this is the most important thing." “Once Russia is involved in the Syrian war,” said the expert, “it means that even attention to the Ukrainian conflict is somewhat weakened. This is now noticeable already. " “Therefore, the United States has achieved its goals and can state that the Russian threat is not a priority at the moment,” Kryzhanovsky concluded.

“We never wanted to threaten anyone and did not threaten,” Gevorg Mirzayan, a researcher at the Institute of USA and Canadian Studies of the Russian Academy of Sciences, said. “All recent actions are primarily related to the fact that Moscow wanted its interests to be respected and allowed to take the place that it deserves by virtue of its military and economic potential.”

The expert is confident that today Russia "has taken everything of its own."

“Our interests in Ukraine are respected, even if it is not explicitly stated,” he noted. - In Syria, we generally assumed the role that the Americans did not fulfill. And thus sharply raised their authority in the Arab world. With Europe, we also seem to be starting to negotiate on new terms. Therefore, it makes no sense to position Russia as a threat. ”

Thus, despite a number of previous statements by Obama, as well as statements by the high-ranking American military who pointed to Russia as the “number one” enemy of the United States, American experts do not see in Moscow that strategic enemy to which attention should be paid. Russians are not “enemies” today, they will not become them tomorrow.

Observed and commented on Oleg Chuvakin
- especially for topwar.ru
Ctrl Enter
Noticed oshЫbku Highlight text and press. Ctrl + Enter
We are
Pentagon CybermenSituational analysis of the death of the MH17 flight (Malaysian Boeing 777), made on the basis of engineering analysis from 15.08.2014
27 comments
Information
Dear reader, to leave comments on the publication, you must to register.