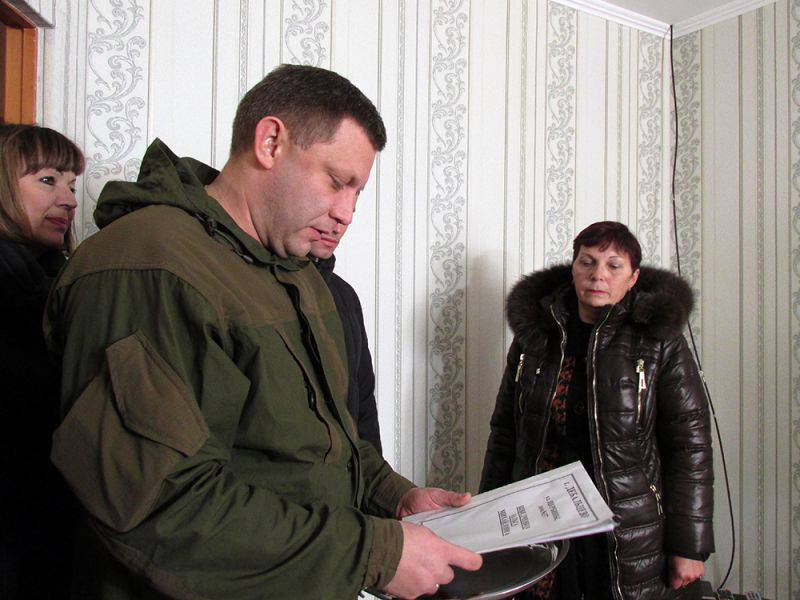 It is difficult to say which of the cities of the Donetsk People’s Republic suffered most from the shelling of ukrofashistov - Donetsk, Debaltseve, Uglegork, Gorlovka ... When you go to Uglegorsk - it seems that it is he ... It is difficult to find a house that would not be damaged. 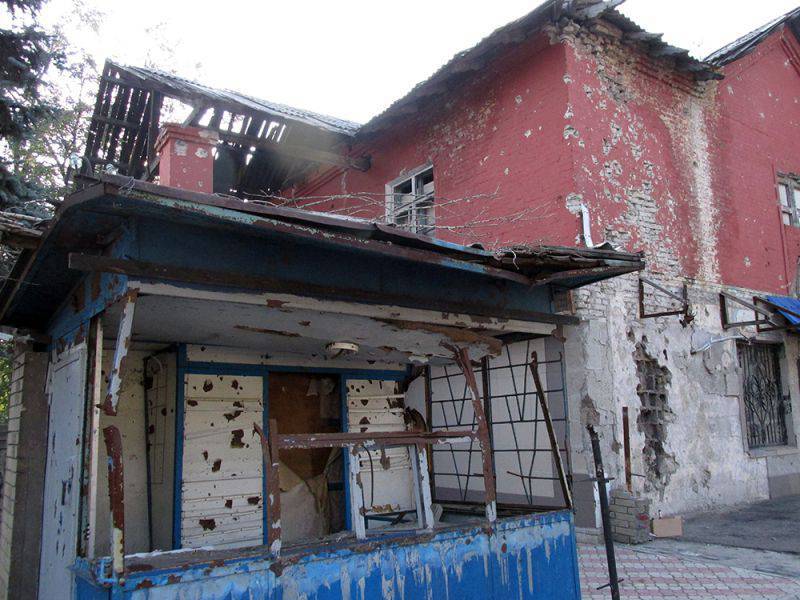 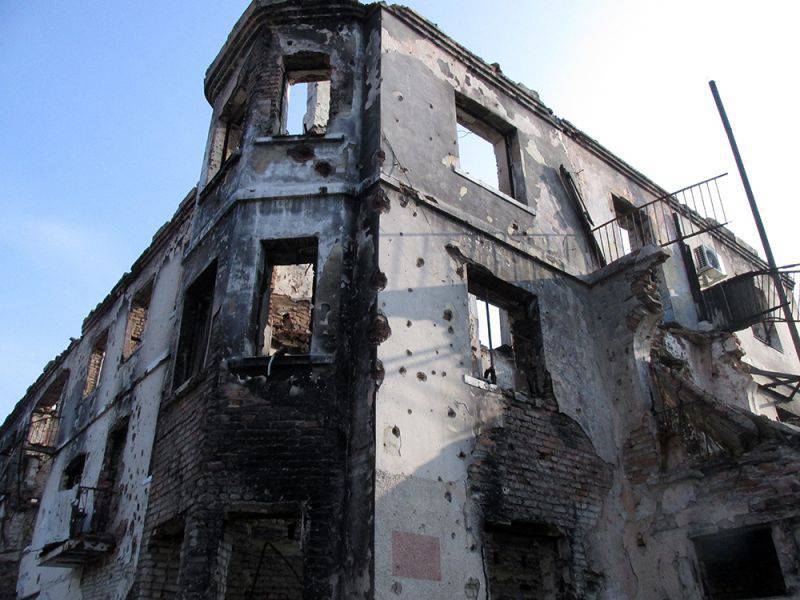 However, there are more objectively destroyed houses in Donetsk - Donetsk and the city are so big. Debaltseve leaves a sad impression. “Yeah, we were sitting in the basements,” the locals often say. One resident told me that the ukrokrateli, under whose occupation the city had been for several months, with a fierce frenzy shot the monument to Lenin that they came across. Yes, and that there is a monument? They also fired on machine houses just like that from machine guns, but it happened that they specifically threw grenades into the cellars where people were hiding, trying to find salvation.

The hardest thing is for those whose houses were completely destroyed. These people were left not only without property acquired for decades, but also without shelter.

The authorities of the Donetsk People's Republic are working to restore the destroyed housing, but not all at once. However, the first initiative is already there.

December 17 head of the DPR Alexander Vladimirovich Zakharchenko solemnly handed over keys and documents for new homes to three families - one in Debaltseve and two in Uglegorsk. These houses were built in the private sector instead of those that were wiped out by Ukrainian fascism from the face of the earth.

Olga Mikhailovna, a resident of Shcherbina street in Debaltseve, is generally very pleased with the house received from the state. Although the area is less than that which was previously. New homes are built on five standard projects, depending on the number of registered people. This is a small house for two. 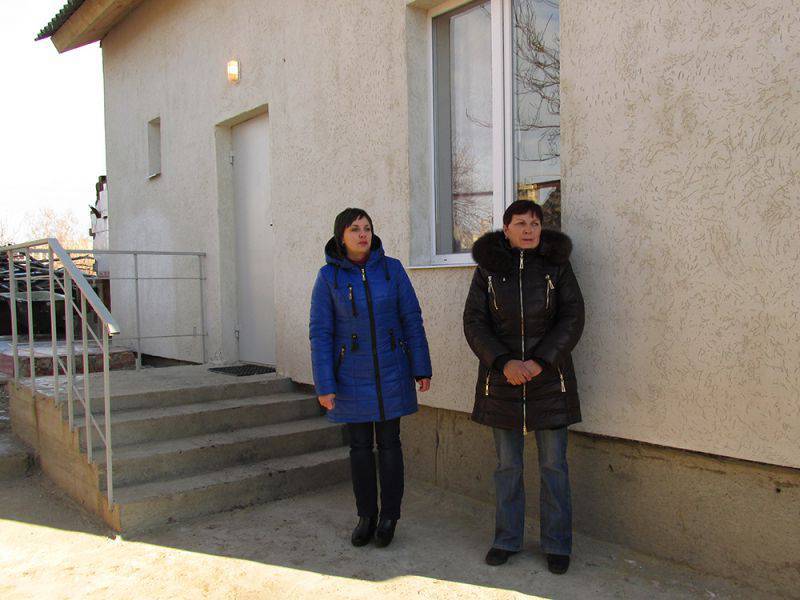 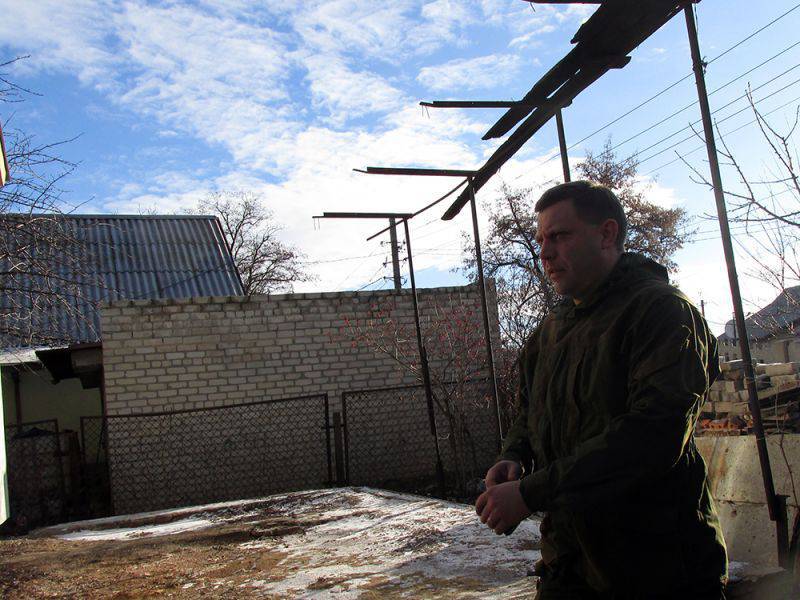 Yard buildings burned and destroyed. But inside the new dwelling everything shines with novelty - at the expense of the state a decoration has been made. Moreover, the owners could choose the materials for repair, express their wishes. There is no gas in Debaltseve yet, so the house is heated with the help of a boiler that needs to be heated with coal. Coal authorities also issued for free.

“I was afraid that I would be homeless,” says Olga Mikhailovna. Her previous home was destroyed by 8 February 2015 of the year. The family was saved by the fact that no one was at home at that moment. In the outbreak of fire, all property was lost - they remained in what they were wearing.

Alexander Zakharchenko personally handed the woman the documents for the new house and the keys to it. In response to the gratitude, he said: "Thank you for everything that you experienced and for staying in the city." "Yes, we are debalchane, we will not go anywhere," replied the hostess. On the table - a modest treat, which the head of the Republic did not fail to taste.

Olga Iosifovna lives in Uglegorsk on Partizanskaya Street, who in her time had seen the Great Patriotic War. She never thought that war would overtake her again and that this war would destroy the house where she lived with her family. But on January 30 three hits from the army ukrohunty destroyed home. 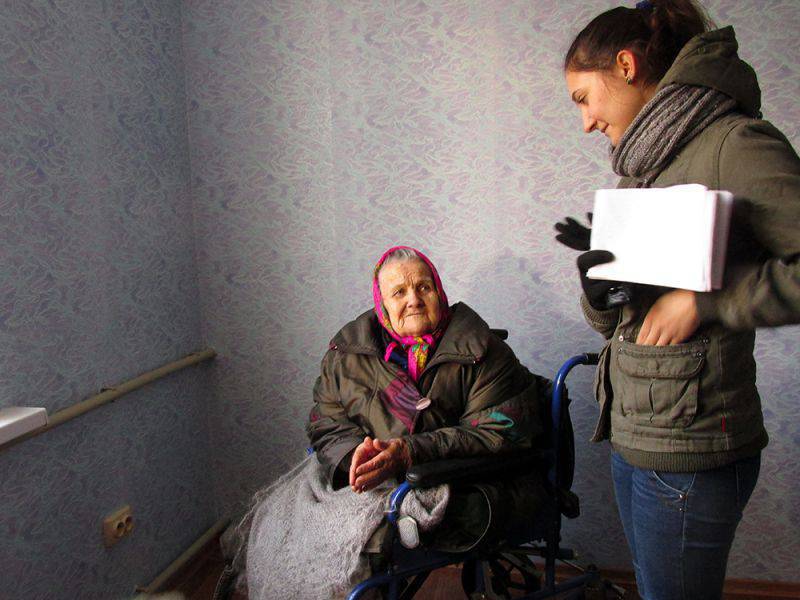 Residents hid in the basement. And everything burned down too. Olga Iosifovna was seriously ill from the stress experienced and can now only move with the help of a wheelchair. She met the head of the republic at the threshold of her daughter, and the keys with documents were also handed to her. Three people are registered in the house, and in the new house there are three living rooms. But the owners sadly recall their good old house, which was larger, and it is understandable - everything was native there. 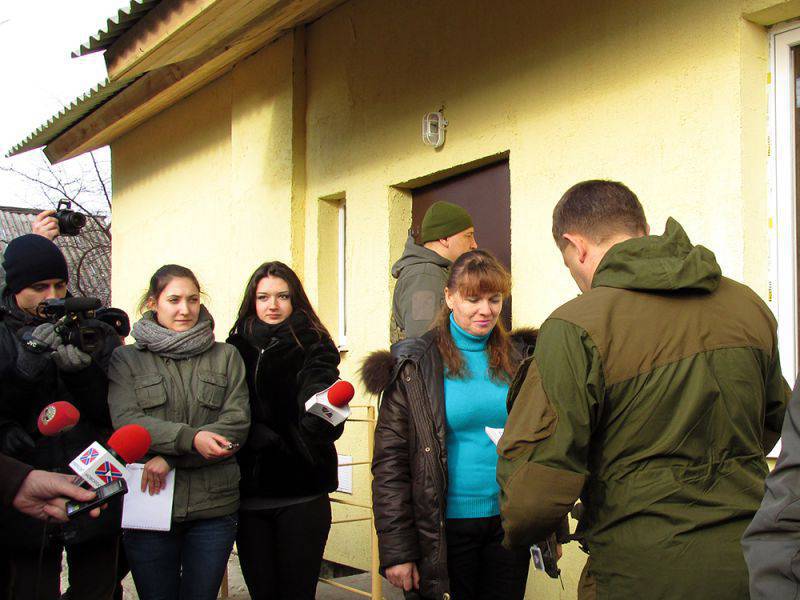 If you look behind the window - there are visible destroyed buildings. It burned neighborly summer kitchen. It will not be restored, because the primary task is to rebuild the living quarters. 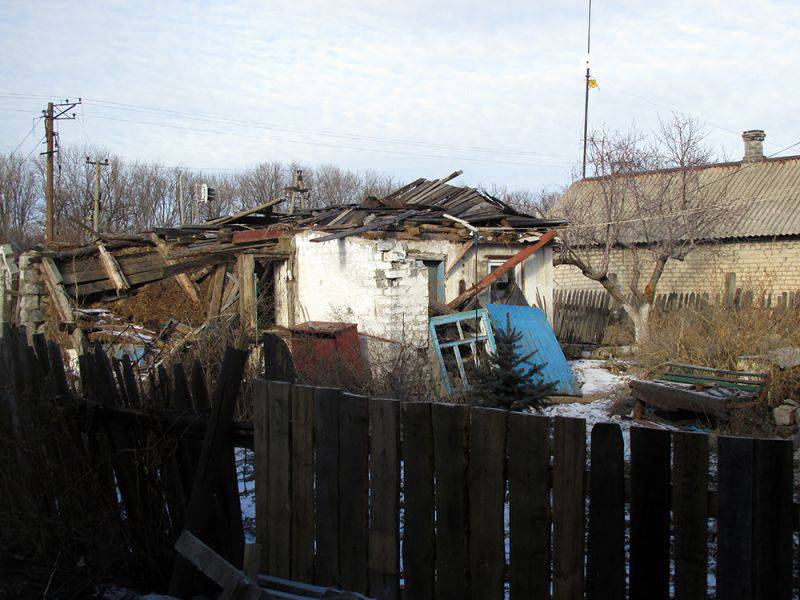 Another new house was erected on Nekrasov Street - the main street of Uglegorsk. The head of the DPR is welcomed hospitably everywhere, thanks for receiving a roof over their heads in the shortest possible time. 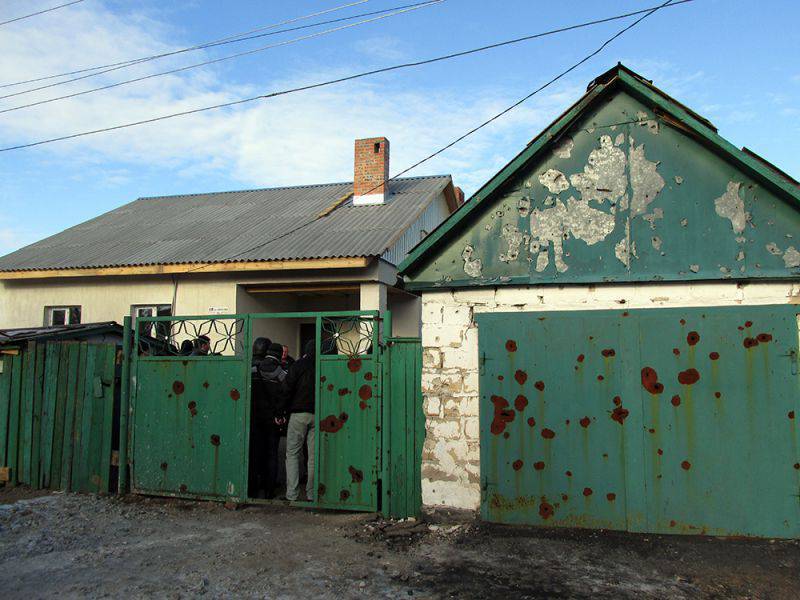 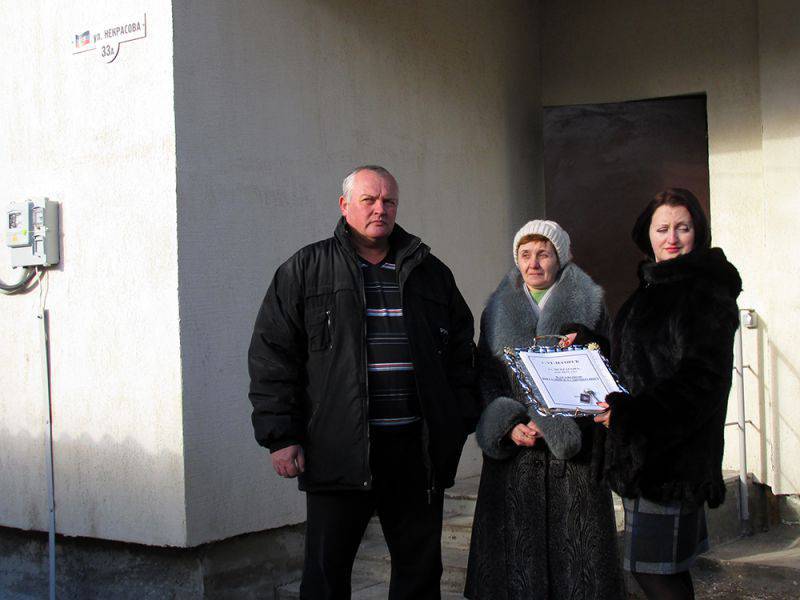 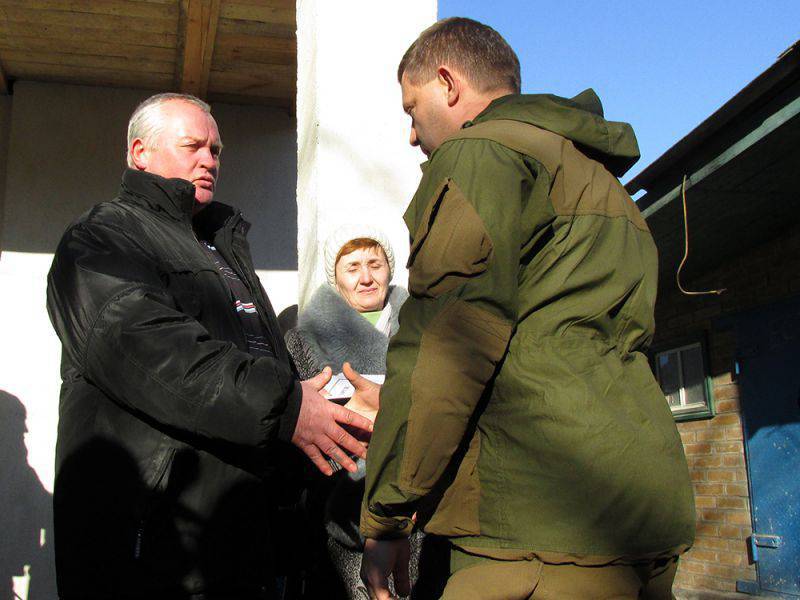 Although, of course, in new homes is still quite empty. People will have to start from scratch, and this is not easy. It was easy for the Ukrainians to erase in one second all the previous lives of the owners, destroy not only the houses, but also the furniture, people's clothes, children's toys, old photo albums - all that was in everyday life, all that was carefully kept ...

In fact, there are already more restored houses, and by the New Year several dozens are planned to be put into operation in Debaltseve and Uglegorsk.

Yes, and Uglegorsk already comes alive. When I happened to be there in the summer - it was like a ghost town. There were so few passers-by that it seemed the city was almost extinct. But now there are already a lot of people on the streets, you can see young mothers with children.

And on the eve of December, 16, the head of the Republic took part in another solemn event - the opening of a new canning plant in the village of Sedovo-Vasilyevka, Novoazovsky district. This is the first such workshop opened in a young state.

People met Alexander Zakharchenko with flags of the Republic. When he was asked to take a picture with them, he agreed. 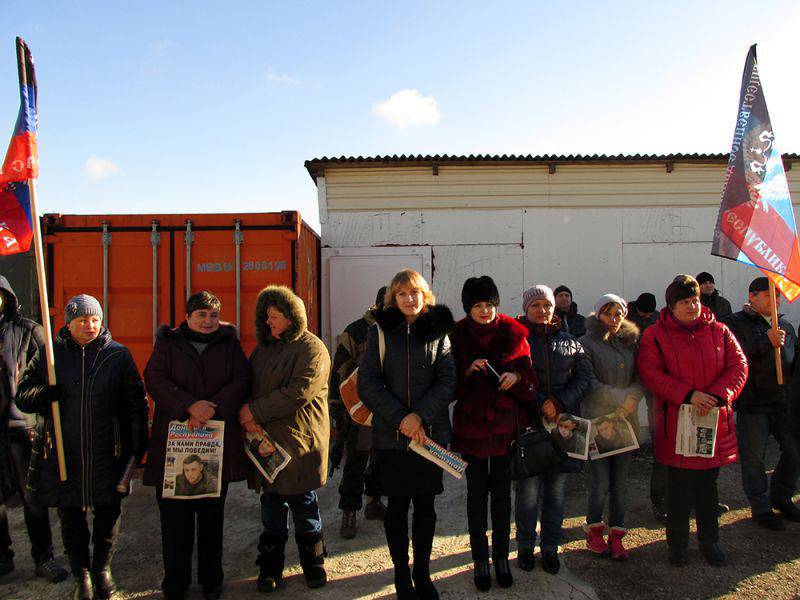 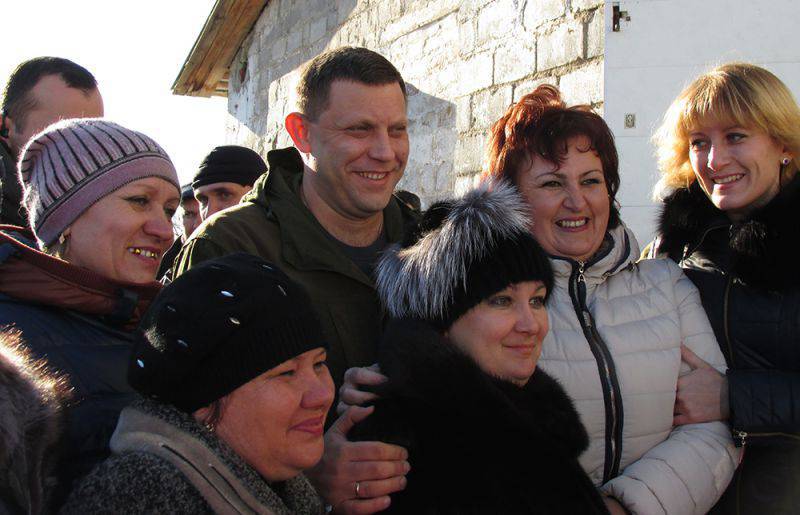 Among other things, the company's employees have developed a special daily army ration. It includes biscuits, pate, can of vegetable snacks and other products. 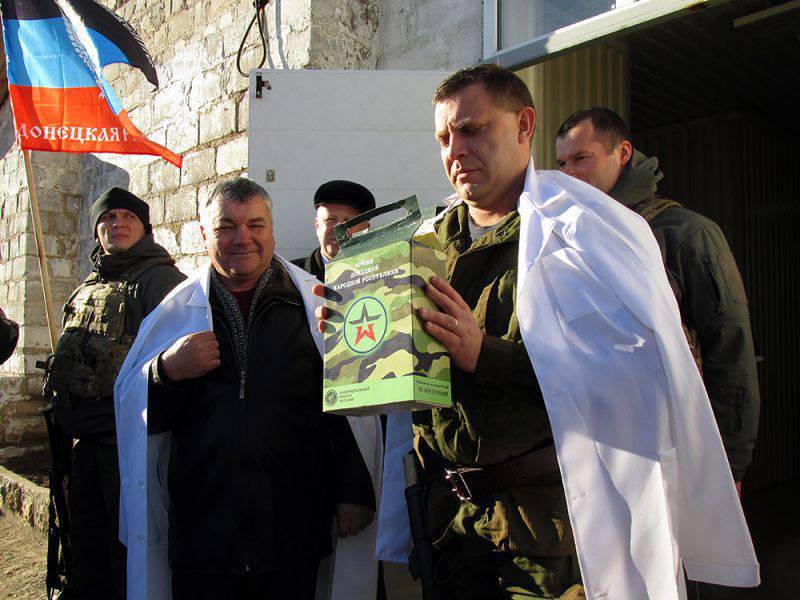 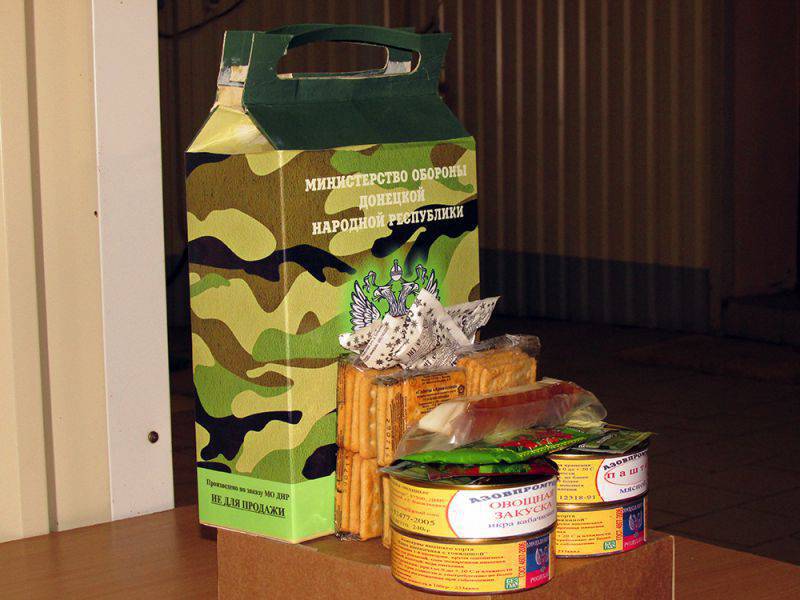 Zakharchenko is very interested in this ration. So surely soon the defenders of the Fatherland will be issued these bright camouflage boxes with everything you need.

Thus, no matter what anyone says, recovery is underway. Industry, housing, schools, kindergartens, and infrastructure are reviving. That which was destroyed by the ruthless hand of the punishers.

Ctrl Enter
Noticed oshЫbku Highlight text and press. Ctrl + Enter
We are
Debaltsevo has a twinIn Donetsk, a monument to Uncle Vasya was installed, and the ukrokrateli “congratulated” the Donbass on the Day of Metallurg
Military Reviewin Yandex News
Military Reviewin Google News
19 comments
Information
Dear reader, to leave comments on the publication, you must to register.