December 17 2015
62
Last Sunday in Tbilisi was a holiday. December 13 on the so-called "New Silk Road" there arrived the first container train "Nomad Express" from China. Together with the Georgians, the Wall Street Journal, The Econimist, Bloomberg and other Western publications, excited about news that the Chinese have found transit to Europe bypassing Russia. 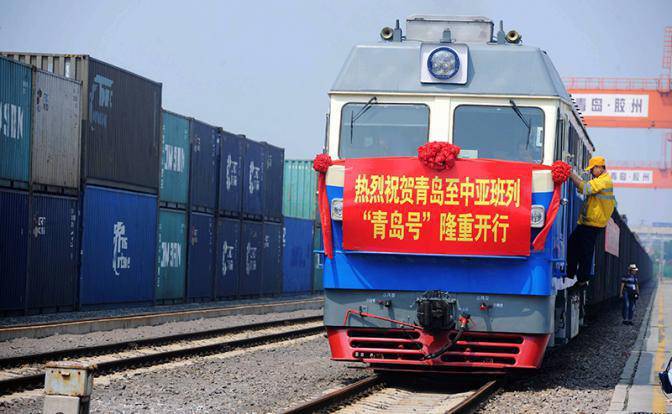 Walking for the Three Seas

Enough comments and local politicians. Georgian Prime Minister Irakli Garibashvili, for example, announced that now cargo delivery from the Pacific Coast to Europe will take two weeks instead of a month and a half, and it’s been a dream: “Georgia will soon turn into a multi-regional center connecting Europe, East Asia, India, Central Asia and Near East".

Garibashvili modestly kept silent that Chinese containers would be shipped to Turkey from the Black Sea ports. The promised Baku-Tbilisi-Kars railway has so far remained an unrealized project. Its start-up at best will take place only next year.

The train with Chinese containers in Tbilisi is not the first. There were already two trains arriving from Urumqi via Kazakhstan and Azerbaijan (they overcame the Caspian Sea on ferries) in August and October. The trains with 44 containers in each passed the route in test mode. The end point was Turkey. Until the end of December, another train with Chinese containers will pass through Georgia. In 2016, transit traffic on this route should be regular.

The news aroused not only the Western media, but also Russian observers. The web was flooded with comments whose authors were a little shy about expressions and evaluations. They wrote that the Chinese had thrown Russia, spat on it. They blamed the Kremlin for not having bothered to build a normal transcontinental road between the Far East and the European part of the country, did not react to the signals for cooperation that Beijing sent to Moscow. As a result, China chose the path for its goods bypassing Russia, established a logistics consortium of the Trans-Caspian China-Turkey-Europe transport route. Chinese partners here were Kazakhstan, Azerbaijan, Georgia and Turkey.

It would be possible to continue the list of claims of commentators against unreasonable Russian authorities. There is no sense in that. First, confused the competence of the authors. They are entangled in two roads - the transcontinental highway and the Trans-Siberian Railway. In Tbilisi, as you know, containers were brought not by car platforms, but by rail. Secondly, it is the Georgian Prime Minister who can fall from ecstasy into sophistry, the reality shows something quite different.

Responsible experts say: "The trans-Caspian route in reality does not exist." For example, Andrei Karpov, chairman of the board of directors of the analytical bureau DORN, calls the transportation of goods from China to European markets along the “southern” route, bypassing Russia, uneconomical and unlikely. Karpov believes that this is a backup option for the delivery of Chinese goods to Europe. The route runs through the Caspian and Black Seas, crosses five state borders instead of two, and “every extra cargo transshipment in the port increases the cost of its delivery”.

The director general of the InfraNews research agency, Alexey Bezborodov, notes: “This is a non-existent route so far. There is a shortage of infrastructure, ports, personnel and even the masses of everything. ” According to Bezborodov, the idea for transporting goods from Asia along the “southern” route through the Transcaucasus was put forward as early as the 80s of the last century. “For almost 30 years, nothing has changed,” the expert emphasizes. “The Caspian ports of Baku and Aktau still lack the necessary technologies for the handling of containerized cargo.”

But that's not the point. In the modern world, multi-vector logistics for the delivery of goods is becoming more common. Take, for example, Russian gas supplies to Europe. Today they are established along three routes at once. There are variations in Chinese export policy. However, the main land route in it was and remains Russian.

The bill is not yet in favor of the railways

Oleg Belozerov, President of Russian Railways, spoke in Vienna at the plenary session of the Coordinating Council on Transsiberian Transportation in mid-November and presented recent data on transit container traffic from China on Transsib. This year, they grew by 89 percent. From January to September, 66 of thousands of containers were transported, which is 11 thousand more than in the entire 2014 year.

This year, China-Europe-China (Chendu-Lodz, Suzhou-Warsaw, Chongqing-Duisburg, Zhengzhou-Hamburg, Wuhan-Pardubice) regular container services for the message China-Spain (I-Madrid) were organized to the regularly operating container services for China. In addition, the route China - Finland has been worked out. From the border station with China, Zabaikalsk station to Buslovskaya station on the Russian-Finnish border, the transit container train takes only eight days.

This fall, the United Transport and Logistics Company organized the delivery of container trains from the Chinese port of Yingkou to Moscow. Not forgotten and other Asian partners. As Oleg Belozerov noted, in the framework of the project “Transsib for 7 days”, Russian Railways introduced the new Baikal Shuttle transport product to transport Japanese and Korean goods from the Yokohama port to Moscow.

All these existing routes are multiple, at times (today the bill goes to a thousand), blocking the possibilities of the Transcaucasian transport corridor. New ways of container trains are being developed. For example, from the same West China Urumqi through Kazakhstan, the South Urals to the ports of the Leningrad Region and St. Petersburg.

Russian railways are developing their infrastructure. Currently the railway bridge Nizhneleninskoe-Tongjiang is under construction. It will allow carrying goods from China through the Jewish Autonomous Region to the Trans-Siberian Railway. The Trans-Siberian Railway itself is being reconstructed. This year 16 billion rubles have been allocated for these purposes.

The expert already mentioned here, Andrei Karpov, considers such investments insufficient and somewhat belated: “If we started warning ten years ago and invested our super-profits from oil in the modernization of BAM and Transsib, more systematically approached this issue, now Russia could offer China ready infrastructure.

At the same time, China is still not in a hurry to transfer its trade flows from sea to land. The reasons for that are simple: today, shipping a container by sea costs the cargo owner three thousand US dollars, and a railway route costs eight to nine thousand dollars. Not every product of Chinese factories is worth three times overpaying for its delivery.

However, freight traffic between China and Europe is growing. It is expected that by the year 2020 they will reach 170 million tons. Today Transsib pulls on itself only a percentage of this weight. Transcaucasia, as we remember, only indicated its route. The bill is not yet in favor of the railways. Although the speed of delivery is impressive. For example, a container train going from Zhengzhou (China) to Hamburg (Germany) runs 13-14 days. By sea, Chinese goods arrive in Europe in 40-60 days. The speed of delivery and reasonable price should contribute to the reorientation of cargo flows from sea to land.

In recent years, China has become the largest exporter, its influence on the world economy has increased. But the dependence has increased - on commodity markets, on communications. It is quite natural that the Chinese are trying to minimize their risks. It is not by chance that all the conversations about the “New Silk Road” in the mouth of Beijing politicians are quite variable. Among the routes mentioned is our Trans-Siberian Railway, a route to Europe via Kazakhstan and the South Urals, transportation via the Caspian Sea and Transcaucasia, and also a route through Iran - the Middle East. Finally, shipping by sea with cargo handling at the ports of Indochina prepared for this is also called the “silk route”.

Note that almost all routes of Chinese goods are focused on continental land. This is what Sun Hongbin, a respected Chinese specialist in global financial systems, says about this. It was he who was able to predict the global financial crisis of 2008-2009 and became a recognized global authority.

Sun Hongbin believes that over the past 500 years, the world has been controlled by maritime powers. China does not make much sense to organize a competition in this direction. But there is a reason to actively use the continental spaces. They will not be able to bypass the largest territory of the planet, which has Russia. The interaction and cooperation of our countries is conditioned not only by the Russian scale, but also by the resources of oil, gas, raw materials for industry, which China does not have.

"Eurasia has all the necessary resources - natural, technological and human - for its development," Sun Hongbin said in an interview with the Vzglyad newspaper the other day. “And if a developed high-speed railway appears, it will complete the era of maritime powers, and the power over the world economy will pass into the hands of continental countries.”

The Chinese financier thus opened the veil over the true plans of his country. "New Silk Road" is not just a route for the transfer of goods from China to Europe. Its ideology implies a technical and technological breakthrough in logistics, so that in two or three days goods flow from the Pacific coast to European consumers. A key sign of innovation on this “silk road” will be a high-speed railway.

One wonders how Russia will fit into the new strategy of China and whether it will fit at all. The noticeable restraint of Russian leaders in relation to the projects of the “New Silk Road” was explained during a recent television press conference of Russian Prime Minister Dmitry Medvedev. Our prime minister made a discovery for himself that Russia is a self-sufficient country. Therefore, it is necessary for it to look at the partners not from the bottom up, but, taking into account national interests, to interact with them exclusively on an equal footing.

Sun Hongbin agrees with this: “Russia has advantages over China - a large territory and resources. China does not have gas and oil, and it also depends on the export markets of the United States and Europe. Therefore, Russian political elites are not afraid of confrontation with the West. ”

To other applicants for participation in Chinese geopolitical projects this is hardly available. For them, happiness is to get their share of the Chinese economic pie. But only his. Our will not leave us. This is understood and respected Chinese financier, and therefore speaks in plural of the power of continental countries.