Dead season over the whole planet: the world economy is plunging into stagnation 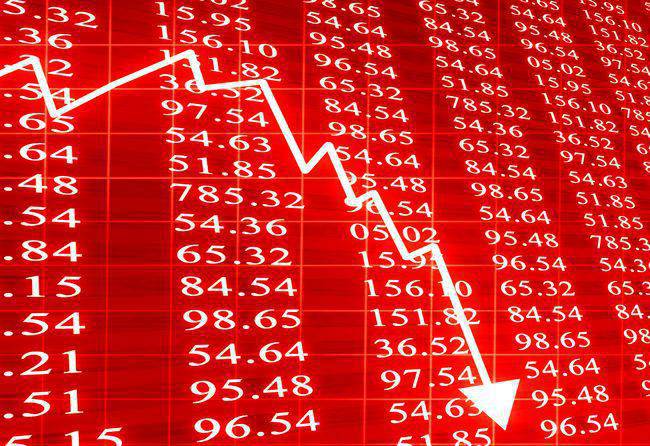 How I “love” all these home-grown “experts” and “analysts” who do not own any professional tools, but they will take some arbitrary parameter and draw global conclusions on its basis and create conspiracy theories.

A vivid example is the decline in oil prices over the past two years. Some say that this is a conspiracy of the United States and Saudi Arabia to harm Russia, others write that this is an attempt by the Saudis to bring down the shale oil market in the United States. In fact, everything is much more complicated and easier at the same time.

Take the annual chart of changes in the price of Brent crude oil. 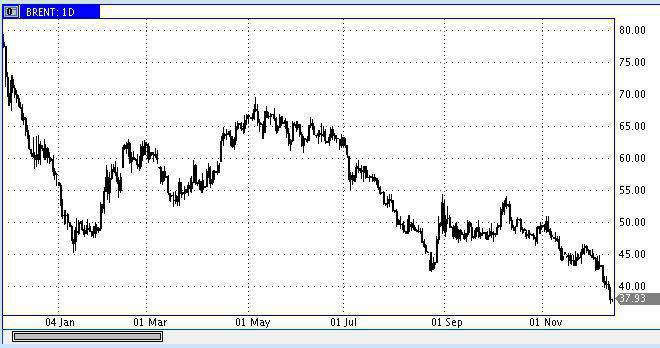 On this chart, we can see a decrease in the price of oil during the year from almost 80 dollars per barrel to 38 dollars per barrel. Yes, this leads to a shortfall in foreign exchange earnings by Russian oil companies and the state budget (as well as to similar losses for Venezuelans, Norwegians and the Saudis). Yes, it leads to the ruin of many American companies engaged in shale oil. But these are not the reasons for this decline, but the consequences.

Plus, the Saudis are increasing production and lower prices, and consumption growth does not occur, with the result that they simply grow reserves in storage, which have already broken all records. Unfortunately, I do not have data on the boundary values, how much the Saudi storages are calculated, so it is impossible to judge the degree of their fullness when overflow may occur.

But this is secondary. The main thing why the price of oil is declining is the demand. And the demand for energy falls due to the general stagnation of the global economy.

Oil prices are falling, because freight volumes are falling. And the volume of freight, in particular, illustrates the second Dow Jones index, transport, which many economists consider to be the most accurate indicator of economic activity in the United States. For other countries, this is also true.

By the way, this perfectly illustrates an example of imbecile Yatsenyuk, who recently boasted that they managed to reduce the consumption of natural gas in Ukraine. Naturally, if the two-year GDP falls by more than two times, then the gas consumption decreases. But to rejoice here is really nothing.

Do you want more evidence that this is not the result of a conspiracy, but the consequences of a severe global crisis, which Western mainstream media refuse to voice? “Do you want songs? I have them! ”

Below are a few charts from the London LME non-ferrous metals exchange.

For some metals, the price drop is even greater than for oil. And if we look at the dynamics in two years, then the fall almost everywhere is even more significant. Who dumping someone for these positions? The Saudis, by the way, do not trade any of this.

We can almost see a similar picture from the dynamics of steel prices.

For the year, the price of steel fell two and a half times, from 500 to 210 dollars per ton (with the lower peak of $ 150 per ton). At the same time, steel mills around the world - including in the EU, in China, in India and other countries - are suffering billions of dollars in losses. Part of the plants in general is stopped (and even more on the verge of stopping), because there is no demand.

The world economy is in the silent majority of the media, but no less a real recession. And the fact that this is not always displayed on the stock markets, speaks only about their speculative nature and deep inadequacy of the ongoing processes.

Both the economists and other economists have already written quite a lot about the reasons for the unfolding crisis, so I will not dwell on them in this review. And no conspiracy theories need to be attributed to what is explained by quite objective reasons and economic laws. Moreover, those who could have plotted some kind of conspiracy would very much like to avoid this crisis (because it beats up on itself, on the existing world-system), but cannot.

For example, in the US, the vast majority of industries show a significant decline. Only intangible murkiness of the entertainment industry is held (during the Great Depression, entertainment also showed record profits). At the same time, the statistics are clearly falsified, and the stock markets are held solely by constant injections of cash from the Fed.

Against this background, the Russian economy is doing very well. Even if there are sinking in places, then the key industries (food, energy and weapons are paramount for survival), and in general, everything is much better than it could be in current circumstances. And those liberal economists who dare criticize something forget to compare Russian figures with the realities of other countries.

From the point of view of populism and ambitions, it is always more profitable to criticize the government than to praise. But in the current circumstances, the Russian government is objectively acting very competently. Yes, you can "file the file." Yes, you can, for example, implement Glazyev’s proposals more quickly. Yes, you can have a lot more.

However, “The best is the enemy of the good,” and perfectionism leads to a broken trough (as can be easily seen from the example of the former Ukraine). Therefore, be able to appreciate what is, and do not chase the mirages.

And note that the global crisis is just entering its main phase. So fasten your seat belts and stay calm - turbulence is possible during the flight. Smile and wave.

Ctrl Enter
Noticed oshЫbku Highlight text and press. Ctrl + Enter
We are
A great interview with Sergey Lavrov: about Ukraine, Obama and IranWhat you didn't want to know about England
Military Reviewin Yandex News
Military Reviewin Google News
108 comments
Information
Dear reader, to leave comments on the publication, you must to register.