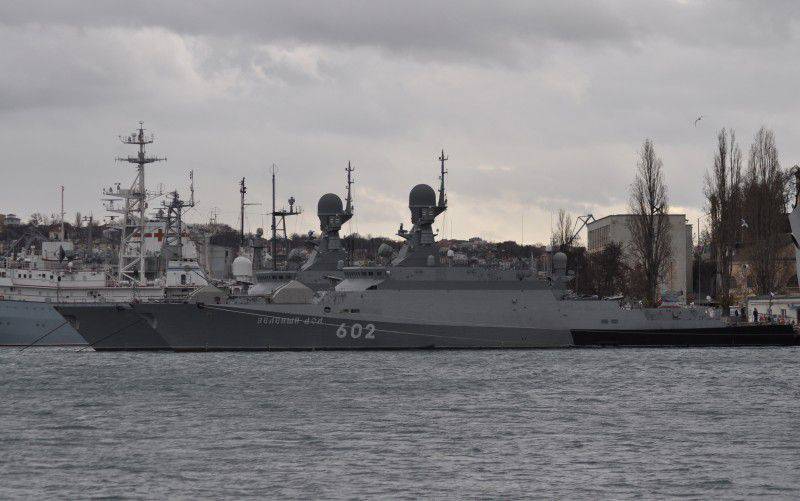 Zelenodolsky plant them. GORKY TRANSFERS NEW SHIPS TO THE MILITARY AND IS PREPARING FOR LIFE AFTER THE NOVEMBER'S ORDER

St. Andrew’s flags will be hoisted tomorrow in Sevastopol on small rocket ships “The Green Dol” and “Serpukhov”, built by the A. Gorky. Also this year, the company sends two orders to the Navy and the Coast Guard: the Sviyaga floating dock and the Polar Star patrol ship. About what other warships will leave the Zelenodolsk slipways, about the Western sanctions and new commercial projects "BUSINESS Online" said the general director of JSC "Zelenodolsk plant them. Gorky "(part of JSC" Holding Company "Ak Bars") Renat Mistahov. 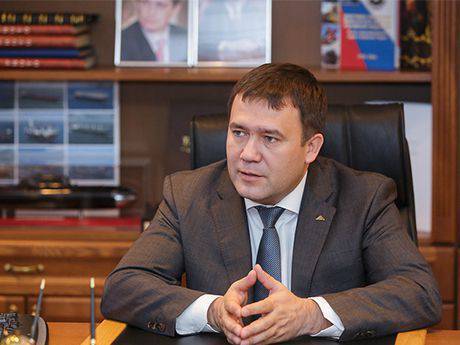 Renat Mistahov (c) www.business-gazeta.ru
“THE MINISTRY OF DEFENSE TRUSTED US ...”

- Renat Iskanderovich, today the Gorky plant is one of the most prolific Russian shipyards. How did you achieve such a density of work?

- If we talk about fertility, then we are talking primarily about small rocket ships (MRK) "Buyan-M" and special-purpose boats "Rook". These relatively large series of modern times appeared due to the fact that the missile ships of the 11661 Tatarstan and Dagestan project that we had built earlier had a good reputation. The Ministry of Defense believed us. "Buyanov-M" was planning to build all 5, but today we are already doing 6, 7, 8 and 9 ... The second mass series - Grachata: 7 boats were built, in construction - 8, 9, 10 ... And today, the military once again believed us, concluding a contract with the plant for the maintenance of our ships on the basis of the life cycle, that is, from manufacturing to disposal. This is a new business for the enterprise. At our own expense, we have created a program, opened a service center in Novorossiysk, we are creating the same in the Baltic.

- Right. The fact is that the Ministry of Defense wanted to build three more ice-class Buyan-Ms. But then this idea was abandoned in favor of another IRA project - the central marine design bureau Almaz. "Buyan-M" was originally built for the Caspian Sea, but with the possibility of seamless transfer from one sea to another. Hence - a small draft, jet propulsion. It has now been decided to build more seaworthy and high-speed RTOs designed for the Baltic, the Black Sea and the North.

- Does the plant claim to release new RTOs?

- They will be built at several shipyards, and the headquarters were laid at the Pella plant in St. Petersburg. We also really want to build these ships. Moreover, the modernization of our enterprise was based on the Federal Target Program, calculated specifically for the construction of RTOs. Today we are the only factory fully ready for the serial construction of such ships.

- Will there be new construction of larger rocket ships, for example, the third pair of “Cheetahs” for Vietnam? And how is the construction of the current Vietnamese order?

- There were some difficulties in the supply of turbines, as they are imported, Ukrainian. But we presented to foreign suppliers a confirmation that Vietnam will be the end user, this is enough to continue the supply. Nevertheless, the dates have shifted somewhat. However, the plant did a great job of changing the construction technology to accelerate it, so there will not be a serious delay. The first ship will be sent for testing in August 2016, the second - in November. Tests, crew training and transfer to the customer will be held on the Black Sea based in Novorossiysk. Vietnam will get "Cheetahs" in 2017 - 2018.

As for the third pair, the Vietnamese side is interested in cooperating with the plant. In addition, evaluating the results of the work of our ships on the Daesh (the Arabic name of the ISIS group banned in the Russian Federation - approx. Ed.), The Vietnamese want to put the Caliber complex on the third pair instead of the Uran missile system. We have experience installing it on the Caspian flagship of the same type with Cheetahs. flotilla Dagestan. Cheetahs with Caliber will become even more serious force in Southeast Asia ... But who will fulfill the order for the third pair is still being discussed. Our factory confirms readiness. And although today we have 21 ships under construction, areas and new equipment allow us to take on new orders.

FROM IMPORT ENGINES - TO CHINESE AND RUSSIAN

- What is the situation with import substitution of MTU engines for Buyanov-M and Grachat?

“Everything is more complicated here.” I had to quickly make changes to the projects in order to install Chinese-made engines. As a result, five "Buyanov-M" we have with diesel engines MTU, and four - with Chinese engines. We will install Chinese engines on Grach starting from the 8 order. The first engine from the People's Republic of China comes in the middle of 2016 of the year, and, I emphasize, the choice in favor of China was not just done: they created a commission, traveled to different countries - potential suppliers, but finally decided that the Chinese one was most suitable for us.

- What engines will be installed on patrol ships of 22100 and 22160 projects instead of Finnish and German diesel engines?

- Kolomna. And the gearbox will put the St. Petersburg plant "Star". Part of the equipment will come at the end of 2016 of the year. Import substitution did not affect the course of construction of orders, and there is no risk that something will not work or will be of poor quality.

- We plan to bring it out of the shop in April-May. This is the first ship in the Russian fleet with container placement of the main armament or equipment, that is, it can be a rocket ship, a lifeguard, and a diver. In general, 22160 are designed to demonstrate the flag of Russia in all seas. At present, two ships have been laid, and there will be six in total in the series: we will deliver the first in 2017, two in 2018, two in 2019, and one in 2020. Plus, the construction of six ice-class 22160 ships is yet to come, but we will begin to actively discuss this in 2016. 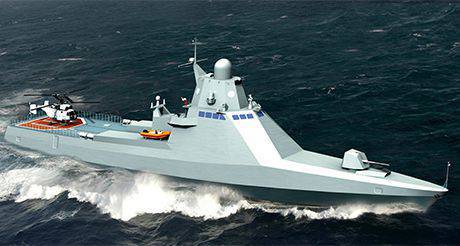 The appearance of the patrol ship project 22160 (c) www.business-gazeta.ru
- When will the laying of a pair of patrol ships for the coast guard of the FSB border service take place?

- We are already building a body for one, for the second - certain blocks. They offered the border guards a groundbreaking ceremony on December 20, when the FSB will celebrate their professional holiday.

- Yes. Now she is on state tests. We plan to deliver the ship before December 30, and the flag on it will be raised in 2016 year. I think after the border guards test the ship, the fleet will also be interested in its capabilities. Autonomy - 70 days, maximum automation: a small crew manages the colossus in 3 thousands of tons of displacement. This ship has no equal and interior decoration. By the way, on the 22160 project, special attention was paid to the crew comfort, which is not very usual for the Navy.

- Almost no exceptional habitat conditions have been promised to the crew of the Sviyaga floating dock, which you launched a year ago. What about him?

- The dock has completed testing and is in Severodvinsk, we are planning to raise the flag on December 17.

- The customer - the main department of deep-sea research of the Ministry of Defense - is pleased, because such vessels have not been built in Russia for a long time?

- Yes, the GUGI is very pleased: the dock arrived in time, because the last such ships built 90, and all of them are functional - more mechanisms for lifting and descending, but not for maintenance. “Sviyaga” is not just a dock, but a floating workshop, that is, now the product can not only be transported, but also repaired, and the conditions for accommodating the crews of the dock itself and the ward ship are very good.

GAS-MOTOR VESSELS: FIRST FOR TATARSTAN, AND THEN ...

- What are the civic themes of the company?

- First of all, this is the construction of two high-speed motor ships of the A145 project. There are no customers for them - we build on credit money. The fact is that we have a unique aluminum workshop with 30 experienced welders. To all this is not lost, it is necessary to ensure the download. And the main shareholder of the plant, the holding company Ak Bars, supported our request. Otherwise, we’ll ruin the workshop, and when real orders appear in 2016 - 2017 (and they will, a message from the President of Russia, who said that the civilian fleet needs to be updated), we must be ready. We hope that А145 will be serially released on the Russian market. Moreover, these vessels have already been tested by the river and the sea - the A145 steam is operated in the Ob Bay.

- What are the nearest plans to modernize the plant?

- For example, we bought two cars for the transportation of integrated blocks: each can take up to 150 tons. The fact is that we are switching to building from enlarged blocks, as is done all over the world. If now only a section is formed in the workshop, which is then transported to the next workshop and assembled there into a block, then in the near future we will assemble the enlarged blocks in one workshop, and then connect them together. Also we go to ensure that these integrated blocks immediately install a piece of equipment. All this is a good acceleration of the construction process - you can not build ships for 30 months! With the new technology and space will be released faster, and profits will increase. After all, by 2019 - 2020 years the state order from the military will inevitably decrease (and today it is 90 percent of our products). By this time, we should be fully prepared for market relations. And this is primarily a civilian direction. In this segment, the main thing for us is high-speed vessels (our horse!) And barges (the share of labor of the plant itself is high). Further the fishing subject is very interesting. Today, Russia needs more 400 of such mining, processing and transport vessels. We offer fishermen different options, are even ready to cooperate on this topic with foreign project bureaus.

- Recently, your plant is increasingly mentioned in connection with the theme of gas-powered vessels. Is it a dream or something real?

- We intend to build for Tatarstan two diesel-powered gas-powered fuel ships and a floating filling station. These are pleasure craft, which upon completion of navigation can be used as coastal hotels.

- Is there a customer?

- Not yet. Interest is shown by republican travel agencies, but state support is needed. And the Ministry of Transport of the Republic of Tatarstan, and the State Committee on Tourism are looking for approaches. In no case can not abandon the idea of ​​transport on gas-engine fuel - this is the future. And it is to those who will be at the forefront of the gas-engine revolution, and the customers will go. In shipbuilding, you have to live, looking at 10 years ahead. If you can’t look into the future, you’ll fail. 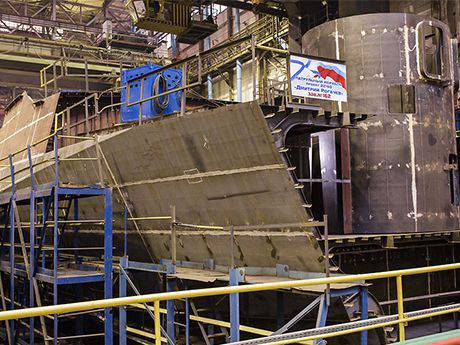 The second patrol ship of the 22160 project "Dmitry Rogachev" was built at Zelenodolsk Plant named after A.M. Gorky "(c) www.business-gazeta.ru

Ctrl Enter
Noticed oshЫbku Highlight text and press. Ctrl + Enter
We are
List of destroyed the largest and most high-tech enterprisesRussia occupies a stable second place in the world market of multi-functional fighters
79 comments
Information
Dear reader, to leave comments on the publication, you must to register.