A sharp Japanese look at the four islands

This “evergreen” topic has now faded into the background compared with the Syrian and Ukrainian problems, but I nevertheless decided to give examples of opinions “from that side” about those most cherished “northern territories”. We discuss it often and with taste, but what do the people of Japan think about it? I am writing “the people of Japan”, because the translation is from English, and a lot of “gaijin” (foreigners) are hanging on the sacred land of Yamato. But today, in the era of globalization, this is normal and even interesting.

In a great article about the G-20 meeting, the role of a starter in the discussion is caused by two phrases:
"Russia seized Kunashir, Etorofu, Shikotan, and a group of Habomai islets at the end of the war, and disputes over their sovereignty did not allow Tokyo and Moscow to sign a peace treaty."
“Abe and Putin had a frank discussion about how they can resolve the sovereignty dispute over the 4 islands kept by Russia ...” 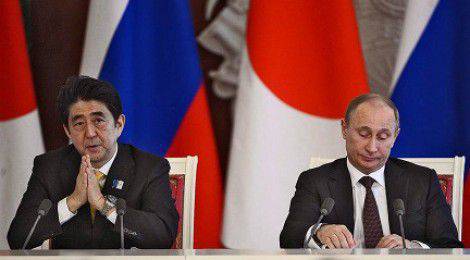 Approximately as a phrase: “Ukraine began the illegal selection of transit gas” in the Russian Internet edition. This topic is also “eternal”, the argument has changed very little in the few years that I am familiar with it. So get acquainted with the views of the inhabitants of the Land of the Rising Sun. Comments are slightly spelled.

Shibuya Boy: “Russia seized the islands: Kunashir, Etorofu, Shikotan, and the group of Habomai islets at the end of the war.”

It's a lie. Russia seized them after Japan surrendered, i.e. after the war, not at the end of the war.

wtfjapan: "After the war, not at the end of the war."

In any case, Japan was a defeated empire, and the winners demanded their reward. Japan will never get these islands back, except that Russia will be offered something very significant in the political and financial field. Japan can complain until it turns blue: these are the facts, and the Russians have all the aces on their hands.

This is actually true. The Soviets captured these islets in battle. You can throw yourshistorical books ”, printed under US control, in a bin.

Kaerimashita: “Give our islands back. In exchange, we can officially accept Putin. ”

smithinjapan: “Abe wanted to arrange Putin’s visit to Japan at the end of the year, but some Japanese officials believe that this might not be a better idea, since Tokyo announced a protest to Moscow every time high-ranking Russian officials, including Prime Minister Medvedev, visited the islands, since July".

Yes, except that it was not the Japanese officials who canceled the visit (this is Putin’s decision), and what Japan expects Abe to travel throughout Europe, saying that everyone should isolate Russia and China. @Shibuya Voy, in fact, you believe in propaganda lies. The war was not over when Russia invaded the islands. I think it was done 6 days before the end of the war. Consequently, “Russia seized the islands at the end of the war” is completely correct. Japan could have capitulated, but the war was not over yet, young man. This Russian islands is simple and understandable.

DieRealityCheck: “Funny. Russians do not respect the treaty, nor does South Korea. ” TheTiger: “It's sad that the territory of weak nations in the post-war world is occupied by others. This also happened to China. Eight nations plundered China. Very similar they did with Japan. ” Shibuya Boy @ yamashi: “You will be surprised, but I read Soviet historical books. There were no battles on or near these islands. All the disputed islands were occupied after the surrender. Japanese troops did not fight. The Soviets admitted that their troops suffered no casualties. As in the Crimea, by the way. It was not a battle. If someone wants to call it a battle, he must admit that the Soviets shot at Japanese soldiers after they surrendered. ” Mizuame: “The biggest chance was after the fall of the Soviet Union. Japan had to make an offer for many billions of dollars to create factories, in exchange for the return of four islands. Yeltsin would not resist. " shimosueyoshi: “And not the 10 anniversary of“ postponing ”anymore? (Putin’s visit to Japan) Either review the issue of Crimea, or enter sanctions at the European level. If Abe wants some kind of semblance of peace / the end of a territorial dispute, he cannot continue to go “middle course”. sf2k: “I understand this - people on the islands speak Russian and have nothing to do with Japan. This seems like meaningless exercise. ” Cristofer Glen: “The maximum that Japan will get is two islands. Japan must remember that it attacked Russia without declaring war on 1904. ” Jay Wilson: "Japan should not invite Russian barbarians to Tokyo until the issue is resolved." 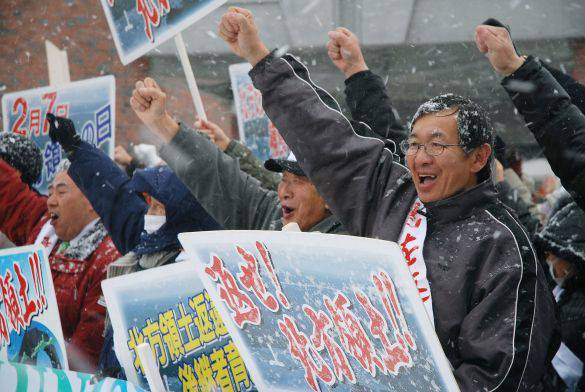 DieRealityCheck: “There was no such rule in 1904 - declare war. The rule was discussed and codified in 1907 (The Hague). ” ThePBot: “Japan must consider herself lucky. After the war, she was not forced to return all the stolen territories (Senkaku). ” Pukey2: “But Japan did not ask for permission when it captured Hokkaido and beyond the lands of the Ainu people. And Okinawa from its natives. " paradox: "Putin is not Obama, he will not do anything that would put Russia in jeopardy, and the return of the islands definitely increases the risks for Russia." Shibuya Boy: “Why would Japan not forget about the past?”

There are four reasons:
a) fishing - there are many natural resources (mainly seafood);
b) US pressure. If it were not for the intervention of the United States, Japan and the USSR would settle everything in 1956;
c) political ambitions. Politicians in Japan earn political capital by promising / trying to get the islands back;
d) all this together.

Ctrl Enter
Noticed oshЫbku Highlight text and press. Ctrl + Enter
We are
Donbass liberation day. That sun, then the rain over the sacred heightJapan and Russia: where does friendship come from?
Military Reviewin Yandex News
Military Reviewin Google News
83 comments
Information
Dear reader, to leave comments on the publication, you must sign in.