December 14 2015
45
When any organization that calls itself public decides to present the next “masterpiece” about the “Katyn truth”, scrawled by the next “expert”, and when representatives of Polish political and socio-political structures are invited to the presentation of this work, then we can confidently talk about orientation of the event. - Once again, the talk will be about “bloody gebna,” “the killing of tens of thousands of Polish officers by the Stalin regime,” “non-participation in Katyn and other similar executions of the Nazis” and everything that fits into one term “solemn Russophobia”.


It happened the other day when a rather noisy presentation of the book “Killed in Katyn” took place in the building of the so-called Memorial Scientific Information Center (St. Petersburg), previously recognized as a non-profit NGO, and was created with the active assistance of all the same non-profit foreign agent. From the material preceding the release of the “non-volatile” booklet (material from the Memorial site):

The noisy presentation of “righteous labor” was due to the fact that not only the advocates of the “doctrine of the hand of the NKVD and Stalin personally” were at the event. The organizers of the event themselves, apparently decided that the presentation will be attended exclusively "the right appraisers stories"But it didn’t work out ... In the hall, as the organizational group found out, there were also those who, to put it mildly, do not share the idea that all Polish officers were shot by the Soviet special services, and that it was Stalin’s hand that led to the death of the officer corps Poland. That same Poland, which not without pleasure annexed part of Czechoslovakia in 1938.

For a start, about who organized the next “symposium” on the Katyn issue with accusations exclusively in the direction of “Sovietism” and “Stalinism”. We are talking about the fund "Iofe" (with exactly one letter "f"). What a foundation, where did it come from? We read on the website of the Memorial Research Center St. Petersburg:

6 November 2015 The Ministry of Justice of the Russian Federation issued a decision recognizing the Memorial Scientific and Information Center in St. Petersburg as a “foreign agent”.

With this decision, in particular, we are obliged to anticipate all materials produced by us with an announcement announcing that they are prepared by "an organization acting as a foreign agent."

Memorial Research Center declares that it does not intend to put a similar stamp on its materials. At the same time, the staff of the Memorial Research and Development Center is not going to stop work, all projects and programs will be continued.

In other words, the Iofe Foundation is a kind of office of Horns and Hooves, which is called upon only to carry out the activities of the same St. Petersburg Memorial, which did not wish to put on itself, you understand the stigma. That is, the “memorials” want to take money from foreign sponsors for conducting, so to speak, specific activities, but you see, they don’t want to report this to the general public. Why would ... 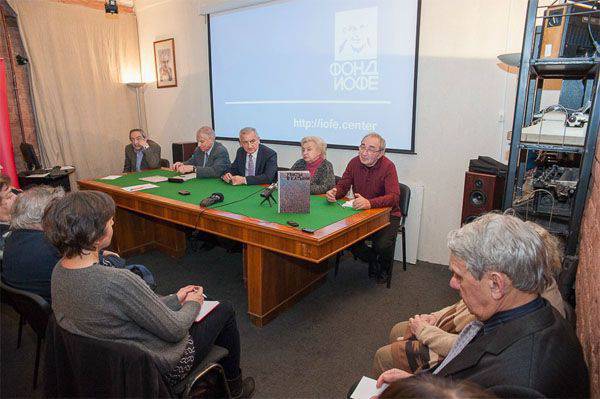 Generally speaking, there is a systemic unwillingness of NPOs to talk about their loved ones. As soon as it comes to the need to report on the financing of vigorous activity from abroad, either a foundation strip immediately appears, or the office simply changes the sign and continues to crap in the usual mode. It is for this reason that over the last couple of years, the number of non-profit NGOs in the country has declined de jure, but the de facto financing of the system of such NGOs in Russia from foreign sponsors has increased in a number of ways. There is a clear attempt to circumvent the law.
In the meantime, the deputies of the St. Petersburg Legislative Assembly are studying the documents about whether the foundation itself receives to Joffe (who, incidentally, did not manage to concoct even his website in the format of force majeure connected with the SIC “Memorial”) presentations of the book mentioned above. The Polish "comrades" took an active part in the event. In particular, we are talking about the Polish Institute of St. Petersburg and the Polish consul in the northern capital. Even a great-nephew of two Polish officers shot in the forest near Smolensk even spoke at the presentation. The nephew told, of course, what had to be told to convince the Polish consul about the correct allocation of funds ...
Presenters of the book stated that they had not done Katynya before, believing that quite a lot had already been written and said, but then suddenly certain circumstances (I wonder what? Grandmas, no? ..) caused an urgent need to write the next " the creation "and once again tell how the bloody and clawed hand of the KGBists shot the poor Polish officers ... As it turned out, the authors of the work were going to" assist "the St. Petersburg libraries and spread their work, but none of the library associations of the city on the Neva River The section was not present ... But then there were people who became presenters and authors to ask, so to speak, uncomfortable questions and report uncomfortable facts.
One of the "inconvenient" for the "memorial" speeches from the representative of the Department of History of Slavic Countries of St. Petersburg State University Vladimir Vasilik:

Another uncomfortable question is the question of the availability of the rolling license of the Katyn film, which the organizers of the presentation decided to show in St. Petersburg "on their own initiative":


Details about the presentation of the next propaganda sketches about the "atrocities of Stalinism against Polish officers" can be found in the material by Nikolai Kamnev - link.

The very fact of the party, where people gather for the sole purpose of working out grants for Russophobia in the publication mode of frankly dubious arguments, says that the system of grant suckers has not only disappeared anywhere, but also learned how to work in new conditions of non-compliance laws that directly concern this kind of activity.