December 16 2015
92
For our heathen supporters,
For babbling babies days

(Their speech was our speech,
While we did not know her)
("By birth" by Rudyard Joseph Kipling)

In Europe, 67-marker haplotypes of the R1a1 haplogroup were analyzed, which helped determine the approximate direction of migration of this group of people in its territory. And it turned out that, starting from Iceland and up to and including Greece, the haplogroup R1a1 about 7500 years ago had a common ancestor! And his descendants, like a baton, passed each other their haplotypes to their other descendants, diverging from one historical region - the territory of the Balkan Peninsula or the Black Sea region. Specifically, these were Serbia, Bosnia and Macedonia, and Belarus, Ukraine, and Russia were involved here. This is the area of ​​the most ancient haplotypes of the haplogroup R1a1. And the most mutated haplotypes show us the time when it was: 7500 thousands of years ago, when there were no Slavs, no Germans, no Celts. 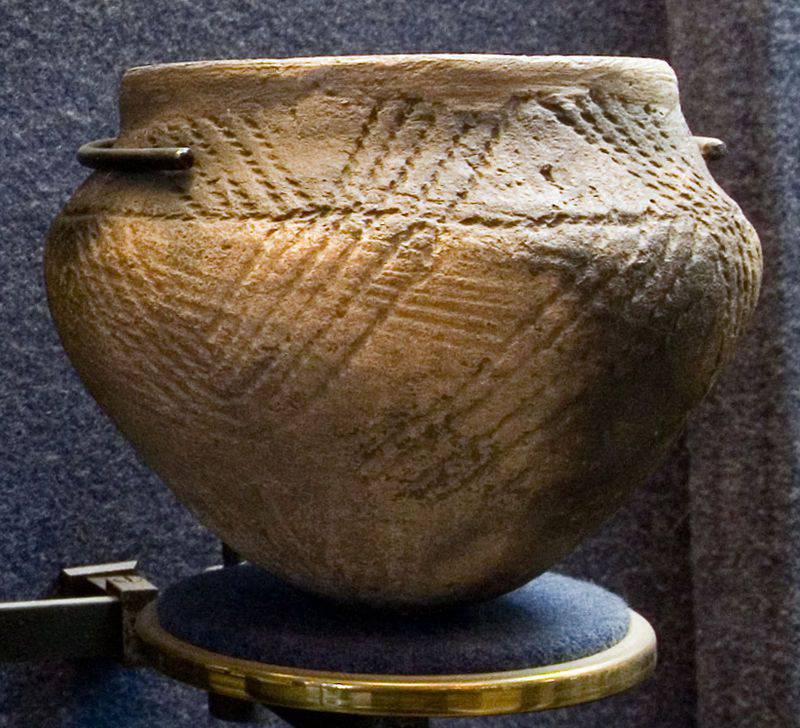 Interestingly, DNA genealogy allowed us to learn that for many thousands of years those distant ancestors of the people of our time lived sufficiently sedentary, and did not move anywhere much. And if some fidgets and migrated, then their traces in the haplotypes left. But it is certain that about 6 thousands of years ago, the massive movement of nations suddenly began, which left its traces in stories peoples of all Europe - and this, above all, was the migration of Indo-Europeans. And all this was connected with the development of the economy and ... the emergence of new labor tools, as it was written in the textbook on the history of the Ancient World for the 5 class of Soviet historians Agibalov and Donskoy. Interestingly, the linguistic affiliation of many archaeological cultures of Europe has not yet been clarified. Although today we know that of the former many Paleo-European languages ​​in Europe, only the Basque language has been preserved, and still a certain part of the vocabulary in the languages ​​of the peoples of northern Europe. 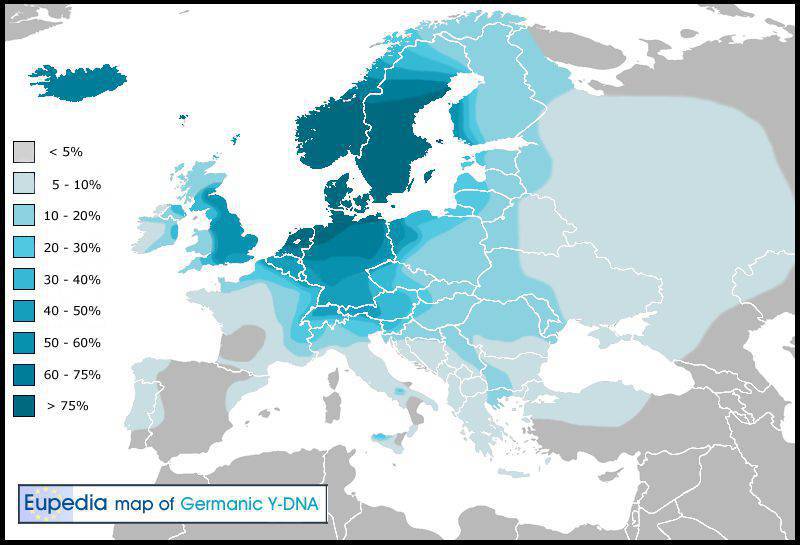 Germans in Europe. Genetic geography clearly shows that the most typical of the Germans genotype should be sought today in Iceland, Denmark, Norway and Sweden. That is, the Germans - it is ... Danes, Swedes and Norwegians!

So it was from the Balkans and from the Black Sea that people of the Yamna and Tripoli cultures diverged, and this happened 6-5 thousands of years ago, that is, in the third or fourth millennium BC. Where until now, the haplogroup R1a1 was quite difficult to say, but, most likely, it came to Europe ... from Asia, because there was no other place to go here.

Well, if you look at individual countries, for example, in Germany, the basic 67-marker haplotype also has its characteristic mutations, and they show that the same Germans were divided from Eastern Slavs again about 6 thousands of years ago. About 14% of people with haplogroup (R1a1-M458) live in Germany today, but in certain areas there are more than a third. The rest of the German population has the “Scandinavian” haplogroup I1 (28%) and the purely “Western European” R1b1a2 (39%). 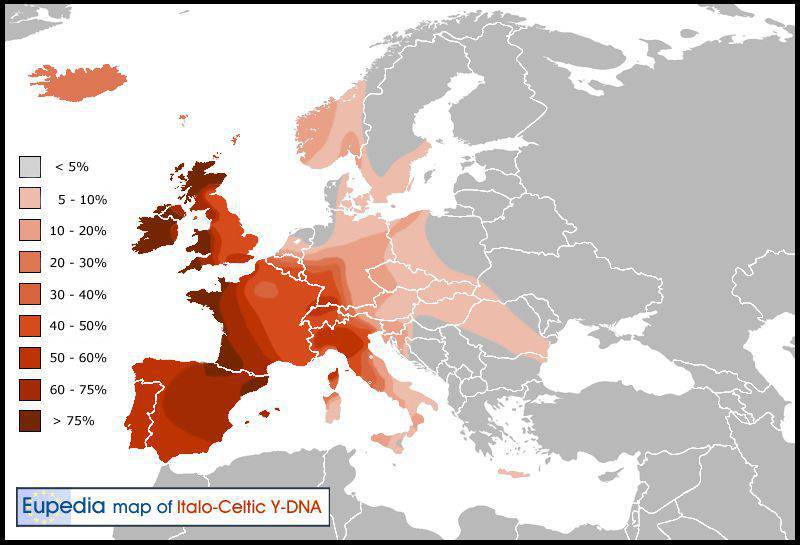 Italo-Celts in Europe. The most typical Celts live today in Ireland, Scotland, Wales, on the Cornwall peninsula in England and Brittany in France, in Spain in the Barcelona region and in the Poitou region, and in the valleys of Andorra. And in Italy, yes, there are too, in the north, but not in the south! And what if this is not a consequence of the pressure of ancient migrants from the East ?!

The ancestor of modern Norwegians in present-day Norway inhabited 4500 years ago. In Norway, the proportion of R1a1-Z284 currently averages from 18 to 25% of the population. In addition, there are Scandinavian I1 (41%) and Western European R1b1a2 (28%) haplogroup. Norwegians have a subclade of this ancient haplogroup R1a1-Z284.

In England, the ancestors of modern media R1a1 also lived 4500 years ago, as in Germany. But for England and in general for the British Isles not too many descendants of R1a1 are typical. They are here all from 2% to 9% on all islands. The Western European haplogroup R1b (71%) and the Scandinavian haplogroup I1 (16%) dominate here. 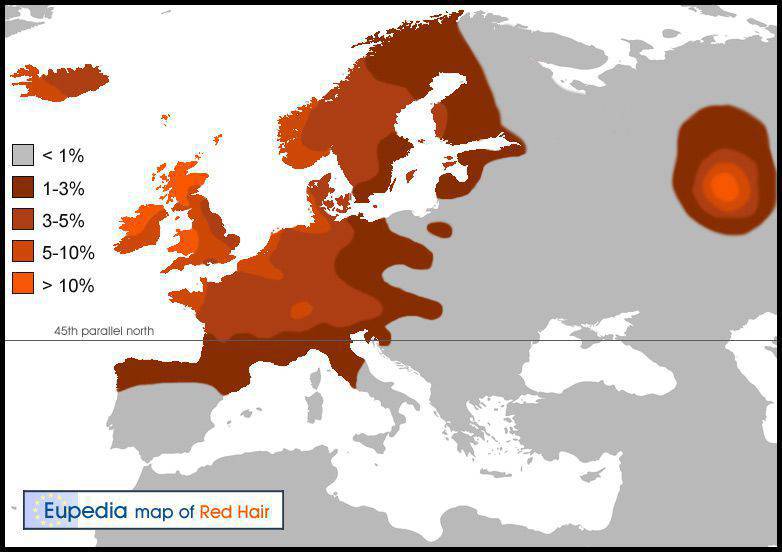 Red hair in Europe. Oh, as you can see, the red hair gene was not born in Europe, but beyond the Urals. Why? Yes, because there was no return migration, but there was a migration to Europe from beyond the Urals! And the most redheads settled again on the "edge of Europe", where the Celts are! And it may very well be that these peoples from outside the Urals moved to the regions of Hallstatt and La Tene and gave rise to Celtic culture. And the Celts, in turn, went further to the West, but they remained there!

Irish haplotypes for the haplogroup R1a1 are considered the oldest in Western Europe, and in the British Isles as well. The reason is the presence of a unique subclade L664. Much says that the settlement of these territories was very early, and that the ancient Irish R1a1 were luckier than the mainland. But now in Ireland there are very few carriers of the haplogroup R1a1, no more than 2-4% of the population, and three quarters belong to the Western European haplogroup R1b1a2.

To master the northern, cold and mountainous Scotland took time. Here, the ancestor of the modern subclade haplogroup R1a1 lived 4300 years ago. In Scotland, the number of descendants of R1a1 decreases from north to south. In the north, on the Shetland Islands, their 27%, and there the number is reduced to 2-5% in the south of the country. On average, there are about 6% there. All the rest, from two thirds to three quarters, are carriers of the Western European haplogroup R1b. 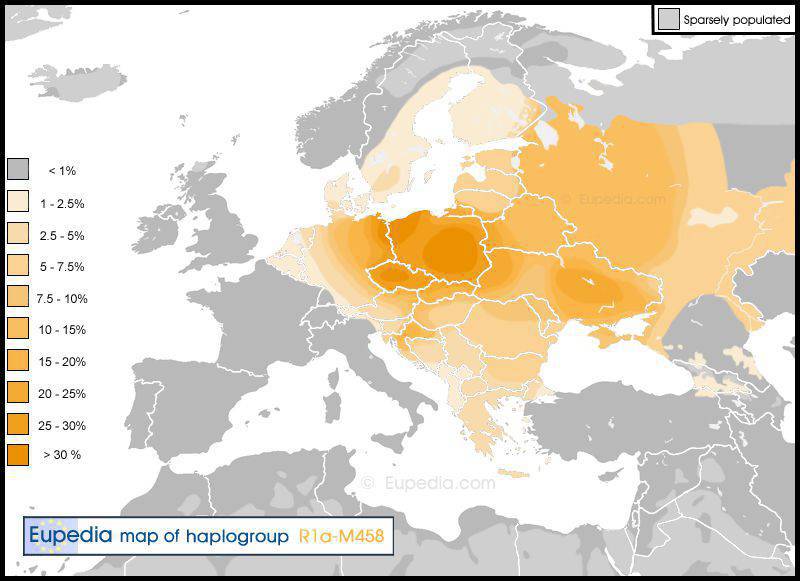 Haplogroup R1a-M458 and its distribution in Europe. 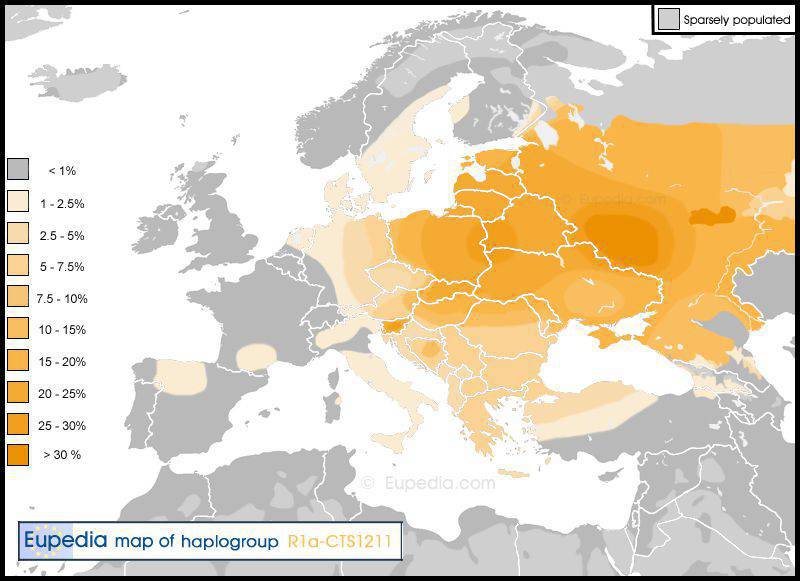 Haplogroup R1a-Y93 and its distribution in Europe.

On the territory of such countries as the Czech Republic and Slovakia, the age of the common Slavic ancestor for them is 4200 years. However, it turns out that the resettlement of our common ancestors on the territory of such modern states as Poland, the Czech Republic, Slovakia, Ukraine, Belarus and Russia took place literally over several generations. In archeology, such a high accuracy of dating is absolutely unthinkable today, but genetics can provide such accuracy. 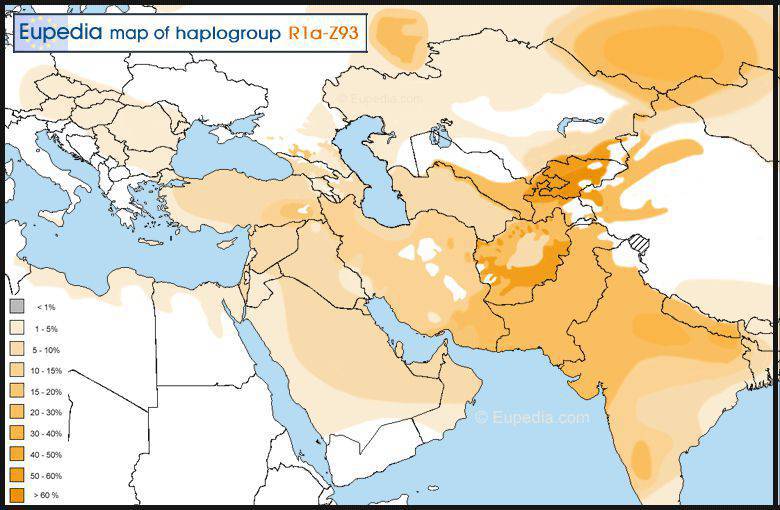 Haplogroup R1a-Z93 in Asia. Judging by this scheme, the “most Russians” are there, these are ... Kyrgyz and ... South Afghans!

Interestingly, in the ancient rich burials of the Magyars, the remains of men with the haplogroup N1c1, who were undoubtedly the first tribal leaders, were found, and all of them were newcomers.

That is, it turns out that the common ancestor of the haplogroup R1a lived in Europe 5000-5500 years ago, but it is still impossible to establish this more accurately. Well, the common European ancestor, not counting the Balkan region - the supposed ancestral homeland of all Indo-Europeans, lived there even earlier - about 7500 years ago. However, the archaeological cultures of all these periods are known to us, and there is no discussion of any greater development of any of them, that is, the level of all was approximately the same and is again connected with the habitat. Those who lived in the forests did not need horses, the inhabitants of the near-lake areas lived in pile settlements, the monasteries of the steppes moved on horses and chariots.

It should be borne in mind that haplotypes are different for ancestors everywhere, their subclades are also characteristic for different regions. And here we meet with an interesting point: the peoples of Altai and many Turkic peoples are also characterized by high percentages of the haplogroup R1a1. For example, for the Bashkirs 40% reaches the subclade Z2123. The R1a1 haplogroup is also represented in the Sayano-Altai region, and among the local Turkic population of Central Asia. For the same Kyrgyz, it reaches 63%. But they have nothing to do with Russians or Iranians!

It turns out the entire haplogroup R1a1 to call one name is wrong, and to identify only with the Slavs - to show ignorance. After all, haplogroups are not ethnos, they are not associated with either the linguistic or the ethnicity of their carrier. Haplogroups also have no direct relation to the genes. For example, this haplogroup is R1a1-Z93, is typical of the Arabs, and for the Levites - subgroups Ashkenazi Jews (they also confirmed subclade CTS6), and another for the Armenians - subclade R1a1-Z93, although among them there and R1a1-Z282.

By the way, in Asia Minor, a common ancestor with the presence of the haplogroup R1a1 lived about 6500 years ago, so that both Armenians and Anatolians have a common ancestor, or several ancestors that are very close in time, only within several generations - a subclade Z93 and Z282. It should be noted that the period in 4500 years before the common ancestor of the haplogroup R1a1-Z93 in Anatolia correlates well with the time when Hittites appear there, although a number of lines R1a1-Z93 could well have appeared there after the migration of the Turkic peoples into our era.

Well, the conclusion is as follows: the initial area of ​​the haplogroup R1a1 in Europe is the territory of Eastern Europe and, possibly, the Black Sea lowland. Before that, probably, its representatives lived in Asia, for example, in South Asia, and maybe even in North China, from where they eventually moved to the West, that is, to Europe and to Forward Asia.

However, this is not the most important conclusion. The main thing is this: today there is enough scientific data in order to, by combining the efforts of genetics, archeology and linguistics, to create a coherent and reasonably substantiated history of the development of mankind. Moreover, it has long been established and today it is only developing and deepening. Attempts to play on some separate inconsistencies and speculate what the evidence in the complex of all these three disciplines is not - meaningless exercise, designed for simpletons. Attempts to udrevnya history of individual nations should also be attributed to the field of politics (and here, by the way, it was Hitler who showed a very bad example!) And purely human envy: we are not the very best today, well, so be comforted by the fact that we were the greatest yesterday! But it is clear that such an approach has nothing to do with historical science, just as the “study” of the earthly “women of the golden and reptiloid section”. Although, yes, today there are books where people even write about it!

Ctrl Enter
Noticed oshЫbku Highlight text and press. Ctrl + Enter
We are
We are all from Adam and Eve, we are all from the same ship ... (part of 1)Armored vehicles of Yugoslavia. Part of 8. The current state. Bosnia and Herzegovina. Serbia Macedonia Montenegro
Military Reviewin Yandex News
Military Reviewin Google News
92 comments
Information
Dear reader, to leave comments on the publication, you must sign in.