If you take care of something, you will eat about
If you value something, you stand on it
Blow - to blow back!
("By birth" by Rudyard Joseph Kipling)

When we want to learn something, then ... it should be remembered that success in an integrated approach. Otherwise, we will be like blind people who have studied by touch an elephant. One took him by the leg and said that the elephant is very similar to a tree trunk, the other felt his stomach and said that it was a huge waterskin, the one who got the trunk, found that the elephant is a fat snake, and the one to whom the tail is thin. And they were all right in their own way! A historian may also fall into a similar error if he does not take into account the totality of scientific data. He should be critical of propaganda, and above all the fact that around his people are all enemies who only dream of harming him. For example, take it from him history. This is a typical paranoia that has nothing in common with reality and has no way to switch attention from internal to external problems: the way is as old as the world, but effective.
Jack London described it in his story “The Power of the Strong” - and this is a very instructive and wise story.

Politicians are trying to do this from time to time, relying on human ignorance. But professional historians value their reputation, so distort something to please politicians? Why do they need it? Reputation is more important than money! People who believe that this is not the case do not read the books of these historians, since they speak only Russian. Therefore, they are hostages of what they say the same politicians. However, there are a lot of vivid images on the Internet today especially for them and the like, where the whole story is shown in “color spots”. You just need to find, look and ... think! After all, today science has many methods of research of the past of mankind. Time machines have not yet been invented, but ... there is already some sort of similarity that allows you to go far into the past and see which people lived at that far time, while archaeologists show with their excavations what these people did there. So everyone who wants to grow old the history of his people, as well as add grandeur and civilization to him, should start with a comprehensive study of the problem, and not pull out from his “bouquet” individual flowers that he liked the most! 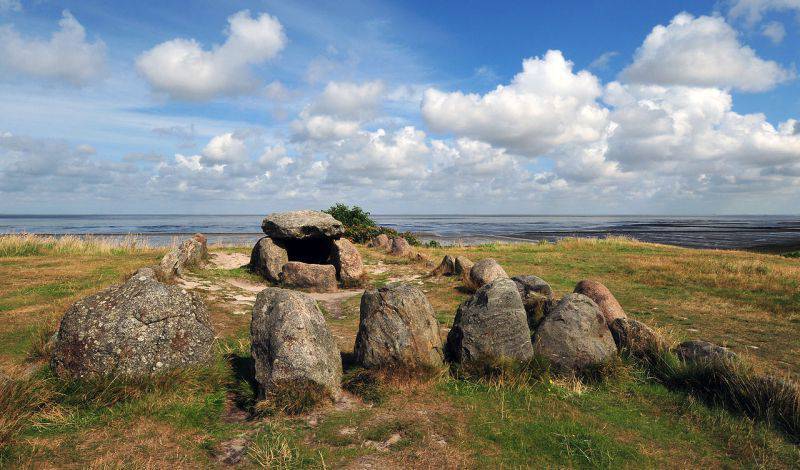 First of all, we recall that even in 1928, the Soviet genetic scientist, academician Alexander Sergeevich Serebrovsky (1892 - 1948) introduced the concept of genogeography, and since that time it has been developing successfully, and its information baggage becomes weightier year by year. And it is based on the fact that nature itself is designed in such a way that all people have the same genetic code: 23 pairs of chromosomes, and in them all the hereditary information received by humans from both parents. Each chromosome takes about half of the maternal and half of the father. What genes will come from his mom, and what dad will give - His Majesty decides the case, which is why we all do not resemble each other and are distinguished by the shape of the nose, and the mind. But in this lottery only one male chromosome - Y does not participate, it is transmitted by nature from father to son without changes, like a baton. But women have no Y chromosome at all. 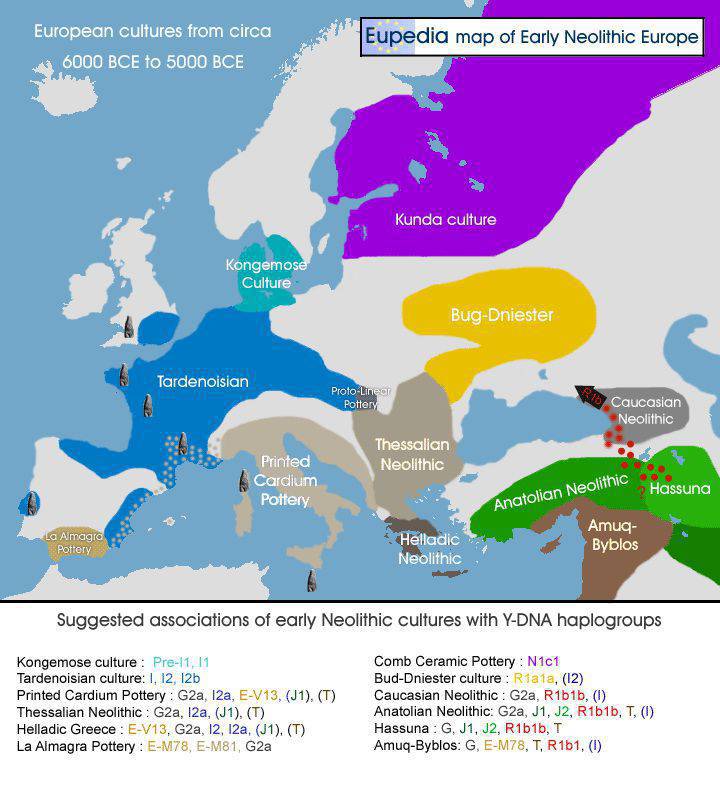 Map of the early Neolithic cultures in Europe 7000 to 8000 years ago. Distribution by haplogroup. The English text has not been changed specifically so that everyone can make sure that “there” no one is engaged in falsifying history and does not in the least belittle the historical past of the Slavs, that is, that is! The names of the cultures are also given in English, but on the Internet each has a Russian-language text equivalent. Thus, it is easy to see what, who, where and when, as well as get information about haplogroups of a particular culture. 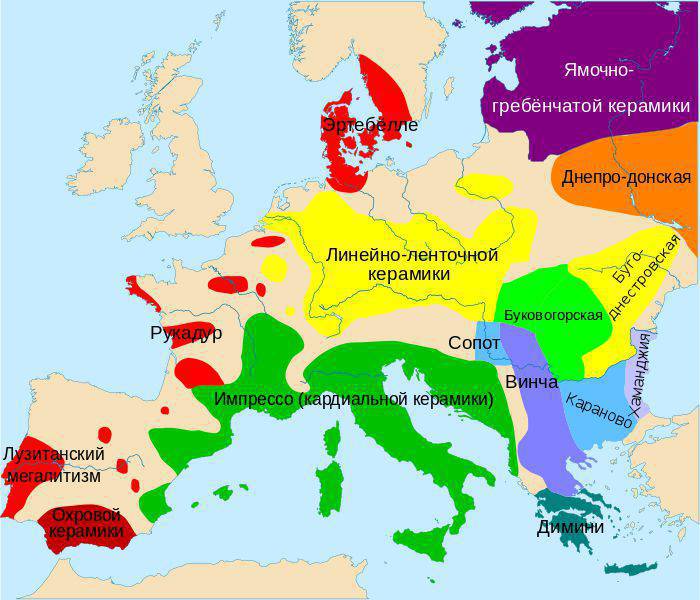 The average Neolithic in Europe according to archaeological excavations.

In the next generations, in some parts of the Y chromosome - loci, mutations occur, and they are transmitted to all subsequent generations through the male line. In loci, or so-called STR markers, there may be tandem repeats from 7 to 42, which gives a picture that is completely unique to each person. Due to mutations, the number of tandem repeats changes in one direction or another, so that the more mutations occur, the more ancient is the common ancestor for the so-called haplotype group. 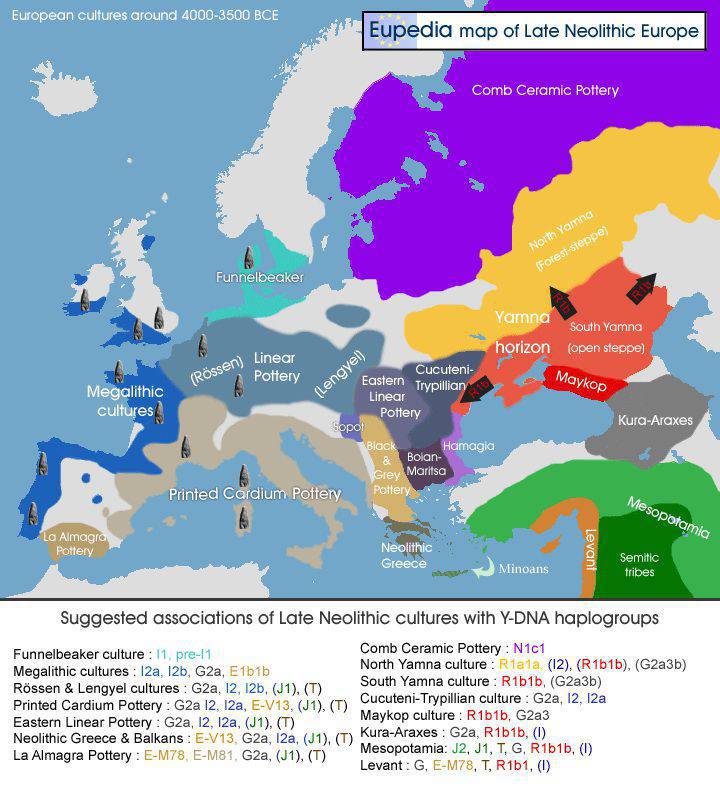 Neolithic culture map from 5500 to 6000 years ago. The cultures typical of our country are clearly visible: Maikop, Yamna, and also Central European culture of linear ceramics.

The haplogroups themselves have no genetic information. But they are peculiar labels of long past eras, and allow us to look into the genetic past of any nation. Well, since we have been talking about Slavs here recently, let's look at the haplogroups belonging to them and their genesis. Special attention should be paid to the four most common among the representatives of the Russian people haplogroup, it is: R1a1 (47.0%), N1c1 (20.0%), I2 (10.6%), I1 (6.2%). To put it simply, the genetic composition of the straight male Y-chromosome lines in Russian people is as follows: Eastern Europeans - 47%; the Balts - 20%; and two more haplogroup Europeans of the Paleolithic era are Scandinavians - 6%; and Balkan - 11%. 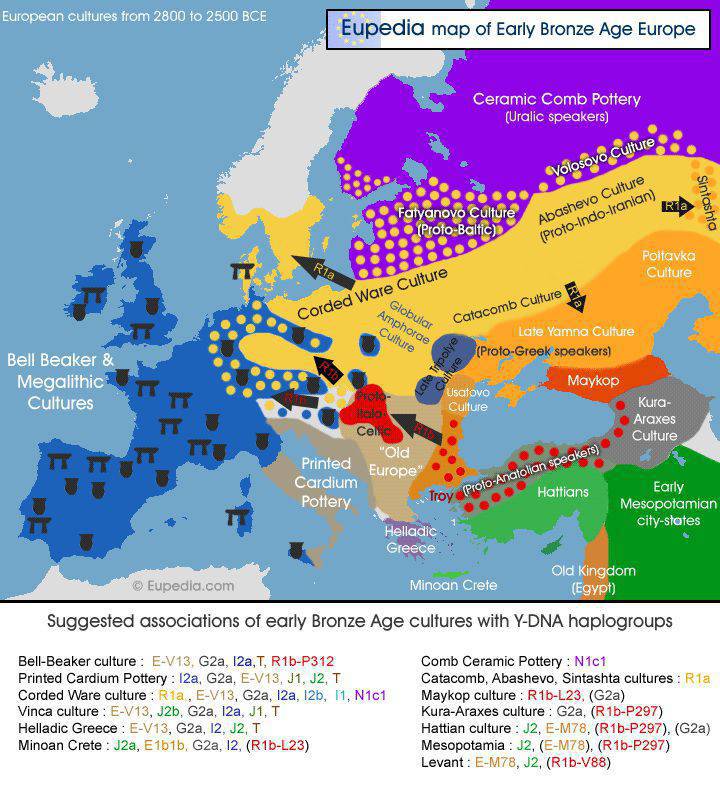 Map of the cultures of the late Neolithic and early Bronze Age in Europe from 5000 to 4500 years ago.

That is, we note once again: haplogroups R1a, R1b, N1c, I1 and I2 are characteristic of Russians, Slavs, and Indo-Europeans.

And now let's rewind the chain of changes to the past and see what was there. And there it turns out that: about 8-9 thousands of years ago there was a linguistic group that laid the foundation for the Indo-European language family (at the very beginning it was most likely the haplogroup R1a and R1b). This family included such linguistic groups as Indo-Iranians from South Asia, Slavs and Balts from Eastern Europe, Celts of Western Europe, and Germans from Central and Northern Europe. Due to migrations, many representatives of these peoples dispersed across different regions of Eurasia. Someone went south and east (R1a-Z93), giving rise to Indo-Iranian peoples and languages ​​and also participating in the ethnogenesis of the Turkic peoples, while others continued to be in Europe (R1b-L51), for example, Slavs (R1a-ZXNX-L283), for example, Slavs (R1a-ZXNX , R51b-LXNUMX). But migration flows were strong, “people mixed up”, therefore, in all modern European ethnic groups there are a large number of different haplogroups. 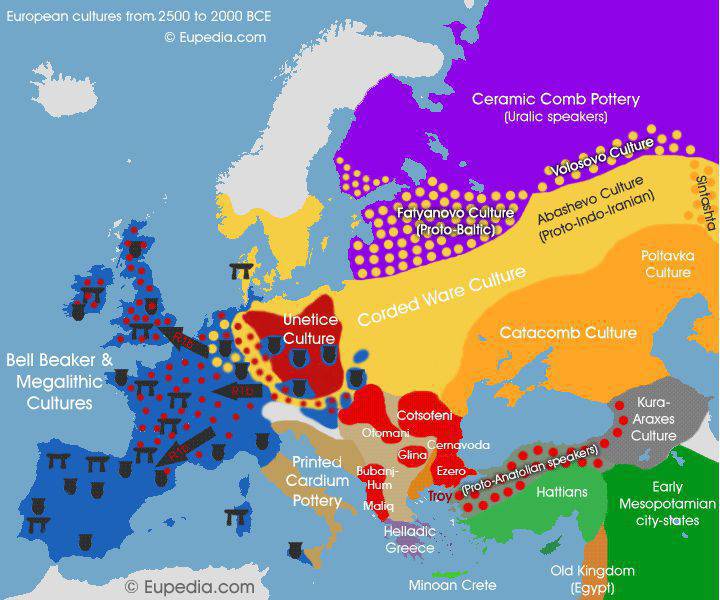 Map of the early and middle Bronze Age cultures from 4500 to 4000 years ago. The areas of megalithic structures and the culture zone of bell-shaped cups are clearly visible. On the territory of Russia, the Srubna culture replaces the pit culture. 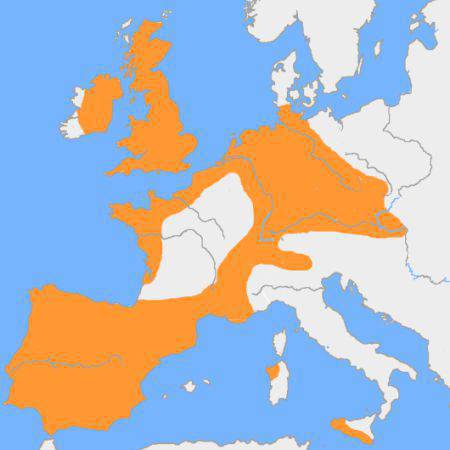 Slavic languages ​​from the once unified group of Balto-Slavic languages ​​emerged, most likely, in the era of late lace ceramics about 3,3 thousands of years ago. The period from the V century BC. IV - V century AD it can already be quite conclusively considered as Proto-Slavic, since the Balts and the Slavs were already divided by this time. However, the Slavs themselves as such did not exist yet, but appeared later, in the IV - VI centuries. AD At the beginning of their formation among the Slavs, around 80% were the haplogroups R1a-Z280 and I2a-M423. 80% balts have N1c-L1025 and R1a-Z280 haplogroups. The connection between the Balts and the Slavs was noticeable from the very beginning, which is also confirmed by the data of archeology.

The Iranian languages, which are also Indo-European, are dated as follows: the most ancient epoch from the 2 of the millennium BC. according to the 4th century BC, the middle one - from the 4th century BC to the IX century AD, and the new - from the IX century AD. and to date. So Iranian languages ​​in antiquity appeared after the migration of a part of the tribes that spoke Indo-European languages, from Central Asia to India and Iran. Characteristic of them haplogroups, most likely, were R1a-Z93, J2a, G2a3. 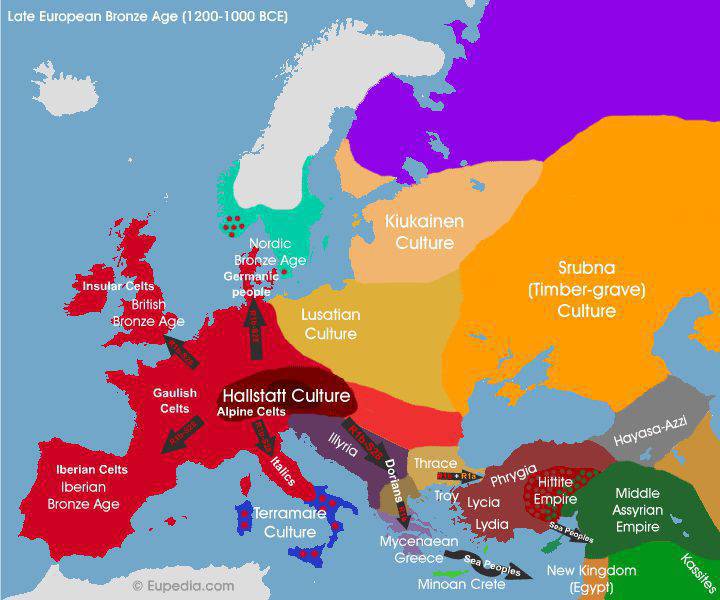 Late Bronze Age map of 3200 cultures to 3000 years ago. Hallstatt culture spreads in the center of Europe. In Poland, it is Luzhitskaya, which is ingeniously named by one of the readers of the All-Russian Union of Organizations as “the culture of rhinitis” or “the culture of diarrhea. On the territory of the south of Russia dominates the Srubna culture.

Thus, the first conclusion can be made, namely, that Indo-Aryans - Celts, Germans and Slavs in academic science are called Indo-Europeans, and this term is most appropriate for such a vast and diverse linguistic group of various peoples. And this statement is quite correct and scientific. Do not scientifically isolate Indo-Aryans and Slavs from this group and assert that they are the most ancient people of Eurasia. Although yes, the heterogeneity of Indo-Europeans in the Y-haplogroups and the so-called autosomes is noticeable in the genetic aspect. 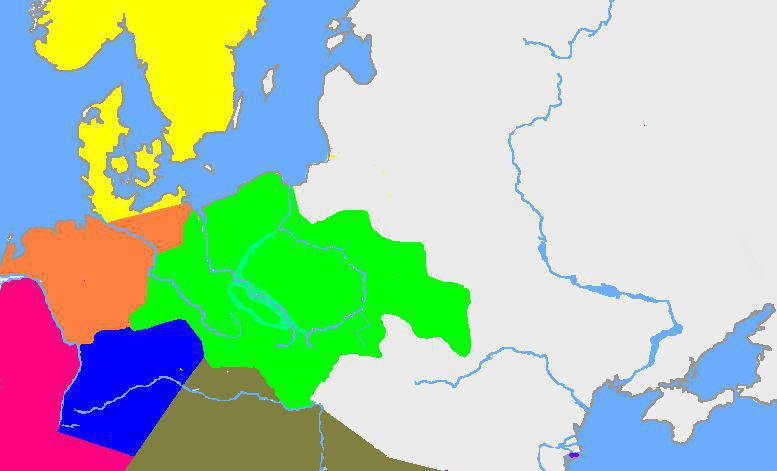 The area of ​​the Luzhitsky culture (highlighted in green) by archaeological finds.

Referring to the texts of the Indian Vedas, one can learn that the Indo-Aryans came to India from the north (from Central Asia), and that these are their hymns and traditions formed the basis of them. And if we talk about linguistics, then, again, the Russian language and, for example, Lithuanian, as a representative of the Baltic-Slavic ancient linguistic community, are relatively close to Sanskrit. But ... on a par with Celtic, Germanic and other languages ​​of the ancient Indo-European family! Common roots and similar words exist in all these languages! And in genetic terms, the Indo-Aryans, as they moved towards India, became more and more inhabitants of West Asia.

DNA genealogy even shows approximate dates of migration of holders of one or another haplogroup in areas of the modern Russian Plain and Central Asia in prehistoric times. That is, when even before the advent of genetics, and without even knowing that it would appear, European scientists, including German, gave the Slavs, the Celts, the Germans, etc. the name of the Indo-Europeans, they were right. And the “Aryans” are the very tribes and peoples that spoke, and they speak Indo-Iranian languages ​​today. And all, however. No more and no less!

Map of the haplogroup R1a migration.

But in what direction did the Indo-European migration flow - to the west, to Europe from Asia, or, on the contrary - from Europe to the east, to Asia? Yes, the ancient homeland of Indo-Europeans has not yet been determined, but ... you cannot walk so far on foot. This means that we must look for the area where the horse was domesticated. By some estimates, the age of the Indo-European language family is about 8500 years. And the horse was about the same for a long time home. And according to one of the existing versions, this could be the Black Sea region - northern or southern. Well, Indo-Aryan was introduced to India about 3500 years ago, most likely from the region of Central Asia, by speakers of the genetic Y-lines R1a1-L657, G2a, J2a, J2b.

Ctrl Enter
Noticed oshЫbku Highlight text and press. Ctrl + Enter
We are
Father toldAbout the German army, or How I served in the Bundeswehr
Military Reviewin Yandex News
Military Reviewin Google News
100 comments
Information
Dear reader, to leave comments on the publication, you must sign in.