Report on the situation at the SE “KMDB named after A.A. Morozova "and SE" Plant named after V.A. Malysheva "

December 11 2015
85
For the Day of the Armed Forces of Ukraine, defense enterprises that were still very closed, opened their doors: SE “KMDB named after A.A. Morozova "and SE" Plant named after V.A. Malysheva. The journalist of “Evening Kharkov” visited the both enterprises (link to the photo gallery from both enterprises). 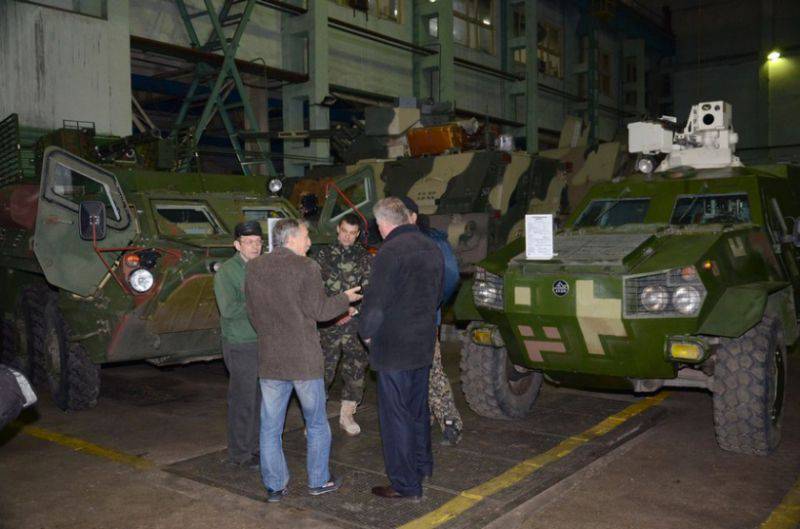 The BTR-4 armored personnel carrier and the Dozor-B armored car in the assembly shop of the KAABM named after A.A. Morozova "(c) Evening Kharkov
What are they proud of at the factories today?

The weather that day was vile. From the morning the city was covered with snow, the traffic went irregularly, the trees fell from the gusts of wind and adhering sleet on motor vehicles and on the heads of passersby, the roads were not cleared. Having met the journalists at the entrance of the KMDB, a spokesman for Ukroboronprom, Lukyan Selsky, immediately warned that the Kiev authorities had not arrived - the airport did not accept. 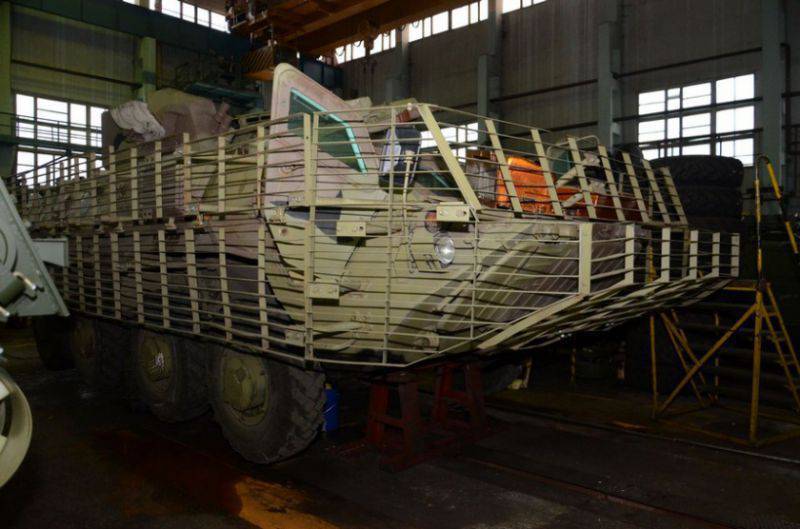 BTR-4 armored personnel carrier with protective screens (c) Evening Kharkov
- Today, times have changed. If earlier our enterprise worked on heavy equipment, then today time requires not only tanks, but also light equipment for our army. Our developments are already embodied in the metal, - says Vladimir Vakulenko. - This is primarily a machine "BTR-4", which has already been adopted by the army. We can produce these tanks with engines of native production (the Malyshev plant) and foreign ones.

The general designer argues that both types of BTR vehicles showed themselves well in work, especially the new powerful tank armor, which was significantly different from the one used in the USSR. 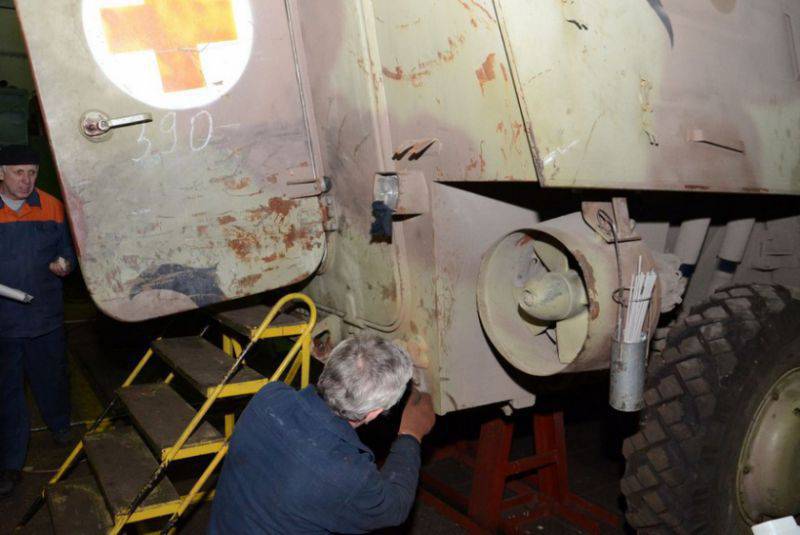 Armored medical machine BMM-4С in repair (with) Vecherny Kharkiv
Shown at the factory and a prototype of the installation "Willow" - a new type of "Grad" - advanced and lightweight.

The general designer clarified that orders for a new installation have already been received, but Verba needs to be improved and tested, and this requires time (about 7 months) and 15,9 million UAH.

Another prototype, BM Dozor-B, was presented by the General Director of the KMDB, Yakov Mormilo.

- This is a more agile and speedy vehicle compared to the BTR - it has an imported Deutsch engine with 190 horsepower, an Alison automatic transmission, Michelin branded tires, four-wheel drive, automatic tire inflation, and a maximum speed of 110 km / h on the highway . Of weapons - machine gun 12,7 caliber, the system of collective protection, designed for a crew of seven.

Yakov Mormilo stressed that this is a fundamentally new machine for the Ukrainian army. She passed state tests, the car is being prepared to be adopted by the Armed Forces. The first prototype was made by the Lviv armored plant, which after the paperwork will produce the entire series of “Watch”. 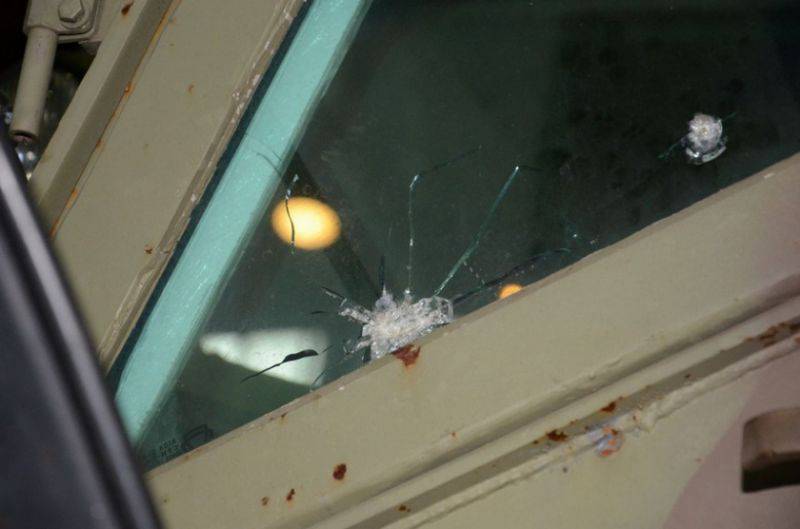 Damage to the BTR-4 (c) Evening Kharkov
Opened the doors for journalists and GP "Plant them. V.A. Malysheva "- factory workers showed shop number 130, where they are engaged in assembling tanks. There the sharks of a feather were delivered on ... An armored troop-carrier, proposing to test the car in action.

- The tank "Oplot" - the most modern machine, developed by the SE "KMDB named after A.A. Morozov "and the second plant design bureau, - assures Alexander Sheiko. 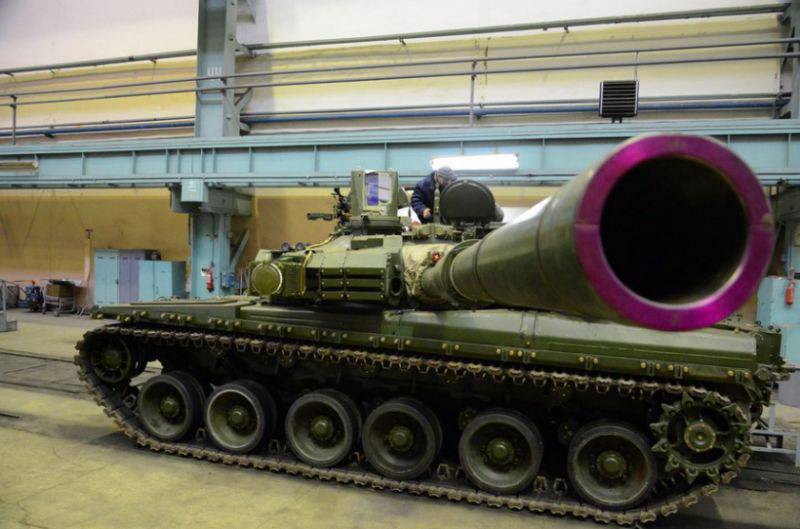 Tank BM "Oplot" (c) Evening Kharkov
In addition, the plant reported that they fulfilled the tasks set by the Ministry of Defense for the repair of BM Bulat. Several dozen combat vehicles entered service with the Ukrainian army.

“The upgraded version of the Bulat BM tank has been brought to the level of the T-81 tank in its characteristics,” Alexander Sheiko noted, not without pride.

According to him, the Ministry of Defense has already received an order for the supply of upgraded Bulatov and Strongholds, which will be adopted by the APU in 2016 year. 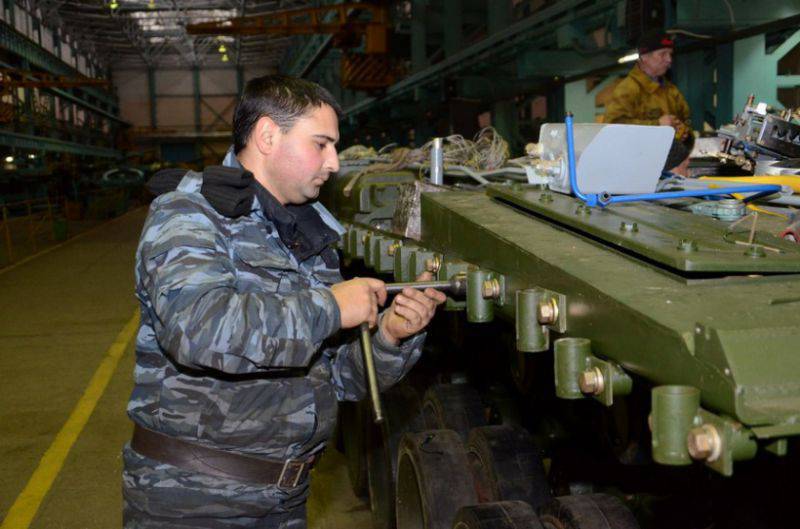 Assembling a tank BM "Oplot" (c) Evening Kharkov
I see a purpose, but I do not see obstacles!

On the experimental base of the state-owned enterprise “KKBM named after A.A. Morozova "the general director and general designer showed samples of simulators for future military specialists. As told by the staff of the laboratory of the state-owned enterprise KABC named after A.A. Morozov ”, these simulators imitate real machines, they can work out 90% driving and shooting skills.

“It’s easier, faster, cheaper and more qualitative to do it on simulators than on ready-made machines,” explains Vladimir Vakulenko.

According to him, the simulators have passed state tests and are in great demand. They have already been installed in some educational centers of Ukraine, and there is a state order for the supply of another batch.

At KB them. Morozova new chief

The management of the Ukroboronprom group of companies nevertheless arrived at the First Capital, only by train. Roman Romanov, general director of the concern, inspected the workshops, and then presented awards to specialists in the armored industry for contributing to the development, production and testing of an experimental model of the BM Dozor-B. And he promised to create conditions for the work of teams, including new equipment and decent wages. 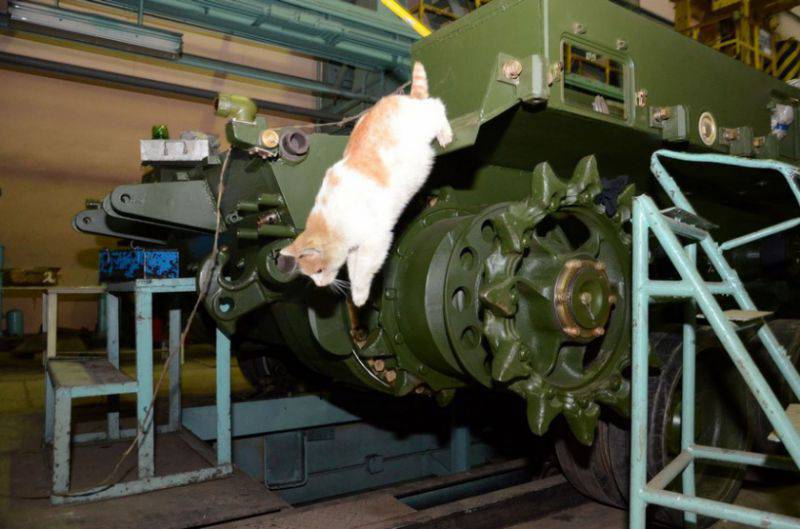 “We are developing a program for equipping and creating comfortable working conditions for work teams,” the general director said.

Commenting on the appointment of a new general director of the state enterprise “KMDB named after A.A. Morozov ”Jacob Mormilo, he noted:

- At the moment, several managers of defense enterprises of Ukraine have been replaced. And if in three months the state-owned enterprise “KKBM named after A.A. Morozov ”will not show positive dynamics, the new leader will suffer the fate of his predecessors.

By the way, representatives of the Lviv armored plant arrived in Kharkov with him to share their experience with their Kharkov colleagues, as well as to celebrate the Day of the Armed Forces of Ukraine.

Deliveries to Thailand remain in force

1 September 2011, the year Ukrspetsexport and representatives of the Royal Thai Army signed a contract according to which Ukraine should supply Thailand with 49 battle tanks Oplot. The contract must be completed before the end of 2015.
- But for financial reasons the work has been extended. When coordinated with the Ministry of Defense and with the permission of the Chief of the General Staff, sending a new batch of tanks to Thailand can be carried out as early as December of this year, and this contract should be completely closed in the 2016 year, said the chief engineer of the SE “Zavod im. V. A Malysheva.

Ctrl Enter
Noticed oshЫbku Highlight text and press. Ctrl + Enter
We are
What you didn't want to know about EnglandList of destroyed the largest and most high-tech enterprises
85 comments
Information
Dear reader, to leave comments on the publication, you must to register.