The results of the parliamentary elections in Transnistria. Is Minsk-3 moving to the banks of the Dniester?

December 8 2015
14
Behind the Syrian and Ukrainian peripetia, aggravation of relations with Turkey and other foreign-dominated foreigners was somewhat lost newsrelated to the results of the parliamentary elections in the Pridnestrovskaia Moldavskaia Respublika. 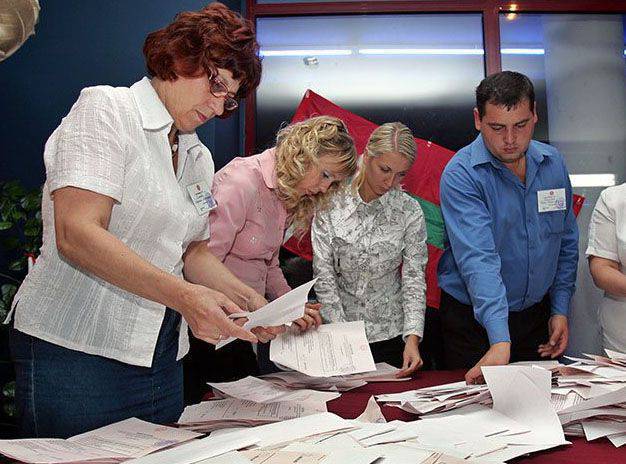 47% of voters took part in the election of deputies of the Supreme Council of the PMR. As noted by the Central Election Commission of the Republic, this is 4% more than during the previous elections (2010). The results of the will of the residents of Transnistria showed that almost on 80% the new Supreme Council of the Pridnestrovskaia Moldavskaia Respublika has an oppositional composition of the Transdniestrian Republic's President Yevgeny Shevchuk - 34 from 43 seats. The main part of the deputies of the Transdniestrian Supreme Soviet are representatives of the Transnistrian party “Renewal”, which today is actually a conductor of business interests, in particular, the Sheriff holding. A holding brings in the PMR budget more than half of total income. The president of the holding is Viktor Gushan, the general director is Dmitry Ogirchuk. Sheriff has significant assets, with more than 13 thousands of employees. The scope of activities of the holding: from sports clubs and hotels to the wine and brandy factory, bakery and banking sector.

Today it is believed that, thanks to the convincing victory of the opposition candidates to the current president of the Transdnistrian Moldavian Republic, on the one hand, the influence of people from the former head of the republic Igor Smirnov is growing, on the other hand, the romanticism disappears from the PMR’s policy, so to speak, enters the republic’s policy large (by regional standards) business.

The Revival Party did not manage to gain enough votes to promote the ideas of the current President Yevgeny Shevchuk (and this is his party), but the Renovation with the sheriffs now have the opportunity not only to make decisions on the formation of the government, but also to make constitutional changes. With the substantial overweight in the parliament, the “Renovationists” even have chances for the president’s early resignation from his post as a result of a potential impeachment announcement. Although, by and large, “Renewal” didn’t particularly need Shevchyuk to leave the post, because in the Transnistrian republic’s 2016, presidential elections are expected, and the results of the elections of deputies to the Supreme Council showed that Transnistrians did not vote for Yevgeny Shevchuk and his political platform burn with desire.

It should be noted that the opponents of Shevchuk had a certain advantage in the current parliament of the republic, but the fact of the matter is that the advantage is “some” and it was not enough for the formation of the PMR’s political landscape. Now is another matter.

It can be assumed that the number of those who support the political forces of the current president has significantly decreased for several reasons. First, both Moldova and Ukraine have recently been going to tighten the blockade of the Transdniestrian Moldavian Republic, and the current president was unable to offer the people of the republic a way out of this situation. For obvious reasons, Shevchuk does not have the ability to somehow influence Kiev and Chisinau in order to loosen the blockade and even more so to lift it. Secondly, the official Tiraspol turned out to be in fact not ready to oppose the practice of criminal prosecution of representatives of the leadership, which (practice) Chisinau has been promoting. Naturally, the decline in the standard of living of ordinary Transnistrians played a role, many of whom, having Russian passports, wished to go to the Russian Federation, as they say, in search of a better life.

What kind of life can those Transnistrians who are not going to leave their native lands count on? There is an opinion that people will have to get used to new political realities. The fact is that “Renewal” is a lot of capital, and it is unlikely that capital, if one can put it that way, would like the attempts of Kiev and Chisinau to restrict its movement. The same “Sheriff” (its political wing), which has economic interests both in Moldova and in Ukraine (if only because we are talking about the geographical neighbors of Transnistria), may well make contact, both with one and with another. ” partners. "

On the one hand, this can be to the advantage of ordinary citizens of the republic (apparently, people hoped to vote in elections), as business line agreements can really at least partially weaken the blockade and give impetus to the economy. But the Transnistrian medal has another side. The fact is that the interests of large business, to put it mildly, are not always an exact copy of the interests of, as they say, working people. There is a considerable likelihood that the “partners” will ask Transnistria to temper the ardor of independence and enter the system of coordinates rushing into Moldova’s “bright European (or specifically Romanian) future”. And if at the helm at this moment there will be representatives of big capital, then there is reason to believe that they are able to accept the offer of the same official Chisinau and arrange a sort of warming option for Moldovan-Transdniestrian relations with all the consequences for Transnistria. As an option, in the next elections (if the MRT in this case will be allowed to be held at all), the PMR Supreme Council will already have openly pro-Chisinau (and even Chisinau) forces.

However, it is necessary to understand that with all the opposition to the incumbent President of the PMR, Shevchuk, the winning “Update” by definition cannot ignore Russian interests in the region. Russia recognized the results of elections to the Supreme Council of Transnistria, Russian observers did not detect any violations that the current head of the Transdniestrian Moldavian Republic tried to declare. We should not forget that the “Renewal” among the allies of the Russian parties is “United Russia”, and this information is unlikely to be exclusively declarative. If so, it turns out that the emergence of all the levers of power in the party of Transnistrian capital fits into the alignment of the interests of the Russian party, many of whose representatives, to put it mildly, are not far from big capital.

Does this mean that the vector of Russian politics in Transnistria is also changing towards the “Minsk scenario” on the Dniester, when the politics of “neither peace nor war” adds more than a weighty component of the wide-ranging financial interests? I would like to hope that ordinary Transnistrians and Russian geopolitical interests (and the interests of the Russian state, and not a narrow group of money-bags) will not be hostages of this situation.

Afterword. By the way, it is noteworthy that in the past few days, the Ukrainian “partners” have become too active in terms of the proposal to “do away” with Transdniestria, as a virtually independent territory, and do everything to transfer control over the Transdniestrian Republic to Chisinau “comrades”, of course with the withdrawal of the Russian peacekeeping contingent from the banks of the Dniester. Is a coincidence? ..

Ctrl Enter
Noticed oshЫbku Highlight text and press. Ctrl + Enter
We are
Update the Russian Navy. In the gland. Part of 1Armed Forces of Transnistria: 23 of the year since its foundation
Military Reviewin Yandex News
Military Reviewin Google News
14 comments
Information
Dear reader, to leave comments on the publication, you must to register.