The smart loves to learn, and the fool - to learn

December 8 2015
51
Reading the moral of Vladimir Putin is not the most appropriate occupation for Barack Obama, says popular American journalist Charles Krauthammer. Sadly, Obama does not even understand the national interests of the United States. But he is trying to teach Putin strategy. These teachings look rather strange, since Obama himself failed his miserable strategic plans. 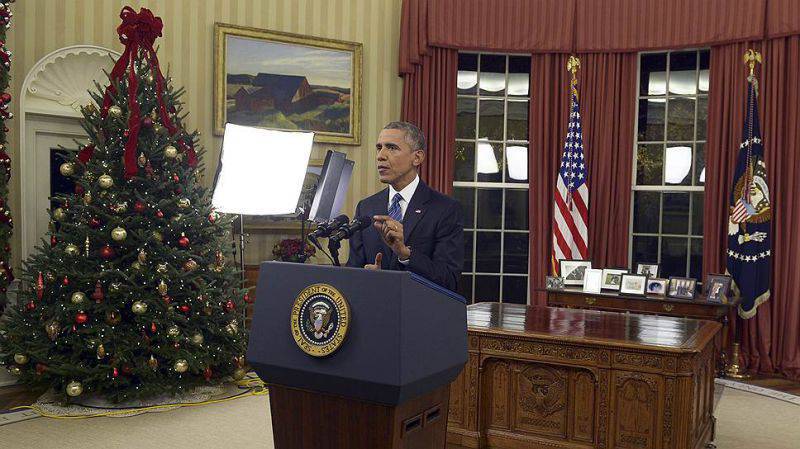 According to Krauthammer, “wonderful” is that US President Obama, who “does not understand America’s national interests,” is trying to “score points against Putin.” Obama criticizes the latter for withdrawing ... from Russia's interests.

Speaking at Fox News, Charles Krauthammer reminded, not without irony, of B. H. Obama's predictions, according to which Putin would eventually understand that his strategy in the Middle East was “not a success." And when Putin realizes this, he will begin to look for an opportunity to “tune out” in the Syrian campaign to the American coalition.

According to Krauthammer, "for a guy who does not understand American national interests, such a statement is wonderful."

Krauthammer believes that Putin has not forgotten the lessons of Afghanistan, but Obama thinks that Putin was in a quagmire.

“The Russians left Afghanistan 25 years ago,” Krauthammer recalled. - The American people are stuck in the quagmire today, under Obama. Obama has been sitting in the office for seven years, and during this time, the Americans have suffered 76% combat losses in Afghanistan. And there is no doubt that our position in Afghanistan today is weaker than it was seven years ago when he [Obama] took office. ”

“And when he [Obama] is trying to teach Putin about national interests and about the“ quagmire ”, he is on rather shaky ground,” said Krauthammer.

In addition, the journalist criticized the White House for the policy of "minimizing" the impact on the militants of the "Islamic State". The US air campaign is no good: the chairman of the Joint Chiefs of Staff said that the drivers of IG oil trucks are civilians who are trying to "feed their families." That is why American pilots scattered flyers warning drivers three quarters of an hour before air strikes.

This joke, the action with leaflets, was planned not by the Pentagon, but by the White House, the journalist said.

In his opinion, no serious air war with terrorists is planned. Even if the highest persons of the state speak about it, it should be understood precisely as a joke. And it will remain a joke as long as the president of the United States is the commander in chief.

Obama himself, add from himself, is determined to destroy the "IG" and even made a new strategy.

Addressing the American people, the President of the United States on Sunday last week announced four points of the new plan, as a result of which the terrorist group would be destroyed. Obama promised to use all American power, quotes him "InoTV".

According to the first paragraph, the US military will track down terrorist organizers in any country where this is required.

In the second paragraph, the president focused on the continuation of the provision of military equipment to tens of thousands of "representatives" of Iraqi and Syrian forces that are fighting against the "IS". Their combat training will continue. In addition, the point includes the deployment of special forces.

The third point of the plan: "work with our friends and allies." This “job” will help the United States stop IG operations, cut off sources of funding, and end recruitment. Here, Obama noted the "sharp increase" in the exchange of intelligence with European allies. "Sharpness" this manifested itself since the attacks in Paris. The president also said that "we are working with Turkey in order to block its border with Syria."

Point four: "under the leadership of America" ​​the world community "began to organize the process and set a time frame to achieve a cease-fire and a political solution to the Syrian war."

Well, and one more thing. Obama expressed an almost seditious thought: all the actions listed above will allow "the Syrian people and all countries, including not only our allies, but also such states as Russia" to focus on the destruction of the "IG".

"Islamic state" the US president called the "common goal".

This Sunday speech, we add, shows that after the terrorist attacks in Paris and after the shooting in San Bernardino (California), where the 14 people died, Obama would not mind cooperating with the Russians conducting a legal operation to destroy the IG in Syria. I would not mind if the “policy of deterrence” and prohibitive measures, which he uncompromisingly leads against Moscow since last year, prevent him from doing so, forcing the European Union to pursue a similar policy.

In addition, Obama is also hampered by Bashar Asad, whom Washington “is proposing” to leave since the days of Secretary of State H. Clinton. Paradoxically, it is Assad and the Russians, who are declared the “national threat” of the United States, and are fighting with the militants of “IG” - and this picture does not fit Obama’s brain.

And of course, Obama, who peacefully bombed Libya and supported the “Arab Spring” and including the armed demonstrations of the “moderate opposition” in Syria, does not believe that in the crisis in North Africa and the Middle East, which became one of the reasons for the ”, Somehow the policy of his administration is to blame. No, Mr. Obama is clean. He just wanted to bring people a little democracy — a commodity to which enterprising uncle Sam “adds to the load” bombs.

Observed and commented on Oleg Chuvakin
- especially for topwar.ru
Ctrl Enter
Noticed a mistake Highlight text and press. Ctrl + Enter
We are
Results of the week. “I will tell you one clever thing! Only you do not be offended! "Results of the week. “It's only you who are clever, and I went out for a walk.”
51 comment
Information
Dear reader, to leave comments on the publication, you must to register.