"They deserve the attention of our people" 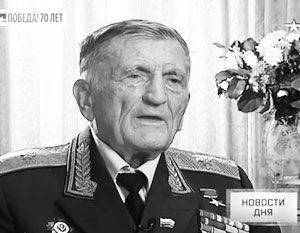 “Near Rzhev, five combat pilots died in our regiment. There, my comrade, junior lieutenant Viktor Bezborodov, died. Near Leningrad, of the 50 pilots who stormed the German Tanks, thirty-three are gone. Killed Leonid Khrushchev, son of Khrushchev, served in our division. The burial place is also unknown, ”the hero of the Soviet Union, war veteran Sergey Kramarenko shared his memories on the Day of the Unknown Soldier.


In Russia, the Day of the Unknown Soldier is celebrated. The memorable date was established by decree of the President of 5 last November. It is timed to the 3 December event on December 1966: on this day, to mark the 25 anniversary of the defeat of the German troops near Moscow, the remains of the Unknown Soldier were removed from the mass grave of Soviet soldiers located on the 41 km of the Leningrad Highway, and were solemnly buried in Alexander Garden near the walls of the Kremlin.

Hero of the Soviet Union, Major-General Sergei Kramarenko, who participated in the air battles of the Great Patriotic War and performed combat missions in other military conflicts, on a memorable date shared his memoirs with the newspaper VIEW.

VIEW: Sergey Makarovich, since last year 3 December is celebrated the Day of the Unknown Soldier ...

Serhiy Kramarenko: The whole country, all men and even women fought, defended their homeland. Perished. Nobody remembers them, except relatives. This topic, in my opinion, deserves attention. I killed two younger brothers. One - near Smolensk, the other after the war in Germany crashed. I think they deserve the attention of our people.
We must celebrate this date. Especially in those families where the warriors died. It is necessary to cover the exploits of soldiers on television, on the radio.

VIEW: At the current date, remember those who fell, whose last resting place is still unknown ...

S. K.: Near Rzhev in our regiment killed five combat pilots. My comrade, Junior Lieutenant Viktor Bezborodov, died there. Near Leningrad the 50 pilots who stormed the German tanks were thirty-three away. Leonid Khrushchev, the son of Khrushchev, was killed; he served in our division. Also the burial place is unknown.

VIEW: How do you celebrate memorable dates associated with war and victory?

S. K.: Six times a year I collect schoolchildren, speak in front of them in the House of Veterans.

VIEW: Do you feel an interest in stories from the youth, attention to veterans?

S. K.: When in the form I pass, many congratulate.

But in general, the younger generation is poorly informed, it is necessary to carry out explanatory work.

LOOK: What parting words do you give to younger generations?

S. K.: To do well and were patriotic. We were pioneers, all were eager to join the army. And in Moscow, the youth ran into the army - 13 divisions were recruited from the youth. And defended the capital. Then God sent a frost, from which the German tanks could not move and the artillery did not shoot. And they retreated all December and January.

VIEW: What days do you remember on holidays and memorials?

SK: 23 February 1943, I shot down the first German fighter. The last fight that was 30 on April 1945, when the two of us, as part of a flight of aircraft, were hunting for German aces and shot down five fighters.

But most of all I remember 12 on April 1951 of the year, when we shot down 25 from 48 American bombers in Korea and 120 of Americans were captured. The Americans did not fly for three months, six days was mourning with them. Then the American pilots refused to bomb the Soviet Union.

Ctrl Enter
Noticed oshЫbku Highlight text and press. Ctrl + Enter
We are
Red commanders on the Alley of MigDon Service Komarich 1646 of the Year
Military Reviewin Yandex News
Military Reviewin Google News
9 comments
Information
Dear reader, to leave comments on the publication, you must to register.