December 7 2015
67
Older, but still looking like a keen-eyed hawk, Zbigniew Brzezinski gave a great interview to Politico magazine. According to the former ideologist of the confrontation with the Soviet Union, the West reacted calmly to the Russian plane shot down by the Turks. Yes, and Moscow later realized that exacerbation of tension would not lead to anything good. Moreover, Turkish-Russian friction can be the cause of "some progress" in the relations of major powers. 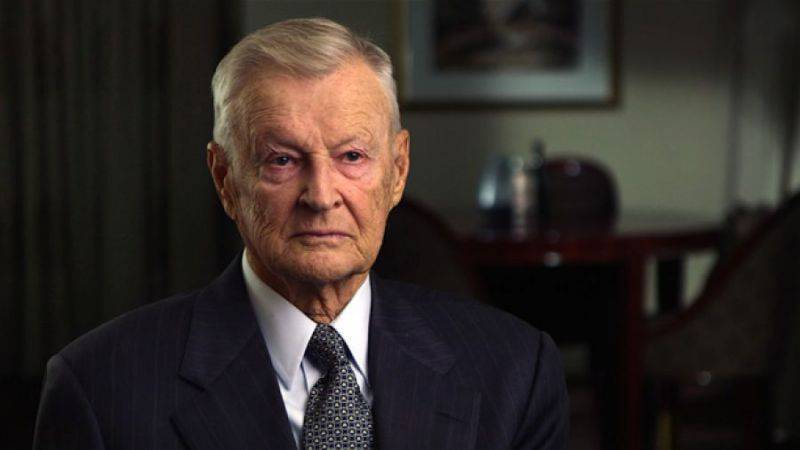 The publication recalls that Mr. Brzezinski was a national security adviser under President Jimmy Carter in the mid and late 1970s. In that historical the Zbigniew era had a reputation as a "Cold War hawk." Because of his hawkish views, he even had to resign (in protest) to one “pigeon” - Secretary of State Cyrus Vance. Brzezinski called for pressure on the Soviet bloc. After the Russian invasion of Afghanistan, he forced Carter to start financing the Mujahideen (in 1980). The aim was to exhaust the Soviets in the war and even crush power in the Union.

However, now, despite the new round of escalation of tensions between the United States and Russia, Brzezinski is optimistic about relations between Moscow and Washington. In his opinion, American and Russian interests in fact coincide in many respects.

To the question of Michael Hirsch about the Russian plane shot down by the Turks, the interviewee answered that the contradictions between Russia and the West on this issue were “serious, but not lethal.” “In some respects,” noted Brzezinski, “if common sense and reason win, they (the contradictions) could even be salutary, and not only in solving the unpleasant regional problem, but also preventing the potentially more destructive consequences of the coming global system, in which three superpowers would immediately dominate. ”

According to the hawk, the West has responded to recent news from the Middle East "calm". Later, the Russians, “taking a deep breath,” realized that the aggravation of the crisis was “a road to nowhere.” The only result of such a crisis would be “a serious clash in which Russia would be isolated.” In fact, thanks to the Turkish-Russian friction, the West and Russia could come to some kind of salutary decision to curb violence in the Middle East.

In early October, in an article for the Financial Times, Brzezinski called on the West to make efforts and involve Russia in negotiations on the future of the region. Now, however, what is planned in the negotiations in Vienna should be done, taking into account the general threat that accompanies the “fine relations between the nuclear powers”.

According to the expert, there is no “great national benefit for Russia” in Syria. It makes no sense to keep Assad "forever in the office." But for Washington there is no national benefit in forcing Assad to leave immediately. And the two powers have a “common interest” in preventing a possible collision between the United States and the Russian Federation.

And the stakes in this game are not so dramatic. There is a way out. The same Ukrainian geopolitical problem can be solved by “Finlandization” - Brzezinski spoke about this before. Ukraine should not join NATO. And now "everyone seems to be guided by such a motion vector," said the ex-hawk.

Returning to the Turkish incident, Brzezinski noted that Washington was “very lucky” that Su-24 was shot down by Turkey, and not by the Americans. If the Americans shot down the plane, Putin would hardly have “digested” such a blow. “And I am glad,” the expert continued, “that this was not an incident in the Baltic republics, where Russians tend to react much harder, and the ability of the Baltic states to fight back would be minimal, which would lead to an obvious need for a forceful response from the US ".

America does not need to worry about expanding cooperation between Russia and China, Brzezinski said. In the short term, China’s geostrategic interests will be in the area of ​​stability. Stability allows China to steadily increase its influence in achieving its economic goals: access to the Indian Ocean and Central Asia (by sea and rail), and through these countries to expansion to the West, resulting in a “gradual and careful” balance of power in Central Asia between Russia and China will be biased in favor of China. And the Russians here will not be able to do anything. Moreover, local countries, with the exception of Kyrgyzstan, will be "welcome" by the Chinese. They are well aware, Brzezinski believes, that their independence will disappear if they become “an integral part of the Moscow-promoted Eurasian Union ...”

“In the cold war era, you were known as a hawk,” the journalist said. “It seems to me that you consider that at present the American and Russian interests are much more similar.”

“This is true,” answered Brzezinski. - If the situation in the Middle East is completely out of control, the first thing will be a threat from Iran, with which a long-term nuclear-related treaty was recently concluded. This, in turn, will create very serious problems for Israel, and at least a few people in the Israeli leadership will be tempted to use military force. ” This is where the region can split. High will be the probability of "redistribution". Therefore, today Russia and the West have a common regional interest - stability, believes Zbigniew Brzezinski.

“But some experts believe that Putin’s goal is to revive Russia's status as a great power, and he will be ready for anything to achieve this,” the interviewer noted.

“Perhaps,” the former “hawk” replied, “his approach to these questions is indeed irrational. He was obviously angry first of all because of the bad news. However, as I think, he very quickly realized that forcing the situation does not promise him a win, unless he is going to start a war. But with whom to fight and with what consequences? ”

It seems that the former ideologue of the confrontation between the USA and the USSR and a close friend of the Afghan Mujahideen Brzezinski has now taken “a semitone lower”. The USSR on the world map is long gone, to suppress and weaken one. He considers today's Russia to be an ally in the affairs of the West rather than a strategic adversary, despite Putin’s “irrationality”.

With this vision of the situation, the hawk Brzezinski seems to be about to turn into a “dove”. In fact, he is clearly pushing Russia towards a new Afghanistan: he wants it to fight for "stability" in the Middle East along with the United States, and in fact instead of the United States. Chaos in the region, arranged, by the way, by the West, will drag out, suck Moscow for a long time, and in such a situation, in parallel with the existing expensive Ukrainian problem, the Kremlin really has nothing left to do but draw closer to the West, beg for new loans and remain the raw materials appendage Into which smart strategists from Washington with the assistance of Gorbachev and his political market heirs quickly turned the largest fragment of the USSR.

Observed and commented on Oleg Chuvakin
- especially for topwar.ru
Ctrl Enter
Noticed oshЫbku Highlight text and press. Ctrl + Enter
We are
Results of the week. “Bambarbiya! Kiergood! ”"Hawk" - aviation special forces
67 comments
Information
Dear reader, to leave comments on the publication, you must to register.