The political stability of society is one of the significant indicators of the effectiveness of public administration. Our people are tired of revolutions, wars, democratic reforms and restructuring. The current president, during his time in power, gradually brought political stability to society.

The well-known American sociologist and neo-Marxist philosopher Immanuel Wallerstein wrote that other countries are turning democratic transformations from “nuclear” (meaning not military potential, but the state as the core of the “world-system”) to the so-called peripheral and global “garbage”, managed by weak unstable governments and economically dependent on the “core”. That is, they become outcasts of globalization. As a result, the state collapses, its economic and political degradation, the area of ​​conflicts and the scale of decline expands. 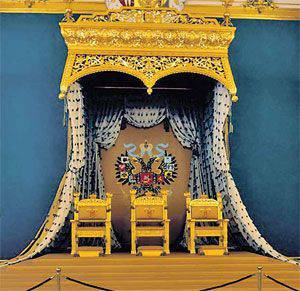 In the modern world, democracy becomes totalitarian. America and other Western states carry out their policies under the flag of annihilating regimes they dislike and establishing their own political systems convenient for the United States and their satellites, as well as their loyal leaders, as it was after the execution of Saddam Hussein and the destruction of Muammar Gaddafi.

It is necessary to stop this totalitarian-democratic invasion of the West. It can be disastrous for civilization as a whole.

The most important condition of the modern world order is the sovereignty of national states and their protection. The Russian president establishes political stability in his country and promotes this format throughout the world. Speaking at a meeting of the UN General Assembly, he urged to treat different countries with respect and not impose a single development model, otherwise "it will be a world in which instead of truly independent states the number of protectorates governed from outside territories is multiplying."

It is well known that for the adoption of decisions and the implementation of certain actions against a number of states, a resolution of the UN Security Council is necessary above all. But NATO forces systematically carry out illegal actions, starting with the implementation of the military operation “Allied Force” and the bombing of Yugoslavia (not only military and industrial facilities, but also human settlements). The North Atlantic Alliance called the cause of these actions ethnic cleansing, which Belgrade allegedly carried out in Kosovo. NATO’s actions in Yugoslavia, which killed more than two thousand civilians, remained without condemnation and punishment of the relevant structures, which must guard the norms of international law. And currently, NATO's destruction machine is the main tool for overthrowing regimes that are undesirable for the United States and its satellites.

“Today, unilateral sanctions bypassing the UN Charter, which not only pursue political goals, but also serve as a way to eliminate competitors in the market, have become almost the norm,” the Russian president said at a meeting of the UN General Assembly.

Sighs on the "bench"

Despite the global challenges in the political and economic life of the country, Vladimir Putin not only keeps this powerful ship afloat, but also returns great Russia to its place as a leading player in world politics. But in order to maintain stability, continue an effective political course and confidently confront the global challenges of our time, the next step is to take the form of forming a national political elite that will follow the ideology of the current leader and continue his course of development of the state.

But until now, some representatives of the liberal and neoliberal ideology, while remaining in power, have a destructive influence on the course that our president is pursuing with the support of 90 percent of citizens. There are known attempts to form a political elite in an alien ideology and create their own “bench” for the future Russia. In particular, Deputy Chairman of the Government Arkady Dvorkovich earlier pointed out that the Presidential Commission for Modernization and Technological Development of the Economy will train leading cadres abroad and for 500 reserve people will develop a special educational program with internships abroad. According to the Deputy Prime Minister, it can be completed in three or four years, after which professional managers will fall into the Russian government for various positions or in state-owned companies. On this task, the government planned to spend from the budget to 60 million dollars a year in order to send 20 thousands of Russian students abroad at public expense.

Where exactly the future political elite of Russia will be suitable, studying exclusively in the universities of the USA and Western Europe, we can only guess. I am deeply convinced that this is a clear threat to the national security of the country, especially in the context of globalization challenges.

Similar intentions of a separate part of the liberal and neoliberal political elite run counter to the statements and real actions of the president, who professed the values ​​of enlightened conservatism and declared the need for the movement of modern Russia along the path of re-industrialization, rather than modernizing jerks and post-industrialization (a disastrous course announced by individual members of the liberal wing), for which Russia is not ready yet. It should be especially emphasized that each technological order has its own political regime and industrialization (re-industrialization) cannot be carried out under a democratic form of government.

The author is the developer of the "Program for the training of a new generation of politicians and political leaders as subjects of the political process of modern Russia", aimed at creating a highly qualified personnel reserve at all levels of state and municipal government, as well as leaders of public organizations. The program has accumulated the best world scientific and practical experience in public administration, converged with the domestic historical tradition and ideology of training true professional patriots.

It is inappropriate to export our personnel reserve for questionable retraining abroad. If necessary, the best scientists and specialists should be invited to Russia and only if it does not contradict our national interests. And despite the resistance and even obstacles of individual representatives of the liberal part of the country's political establishment to the implementation of this program, we must do everything we can to contribute to the return of dignity to the entire Russian people, past greatness and power to our Motherland.

The following immediate measures to implement the “Program for the preparation of a new generation of politicians and political leaders as subjects of the political process in modern Russia” are expedient:

-administration of the president and the government of the Russian Federation to carry out an annual state order for the preparation of this category of personnel;
-to consider the question of creating a Training Center on the basis of the Military Academy of the General Staff of the Armed Forces of the Russian Federation or a new (independent) Institute for training and retraining of personnel of a conservative (patriotic) orientation using the intellectual potential of the scientific and personnel military-political elite of Russia.


The program is aimed at policy makers in the structures:

Ctrl Enter
Noticed oshЫbku Highlight text and press. Ctrl + Enter
We are
The world we leave, the world we enter, and the world between themLeague of distinguished gentlemen
Military Reviewin Yandex News
Military Reviewin Google News
70 comments
Information
Dear reader, to leave comments on the publication, you must sign in.