Wherever you look - everywhere clan

December 2 2015
84
The solution of economic and criminal problems of Dagestan will begin only with the return of the Russian population.


The leadership of the republic shows a certain concern in connection with the outflow of the Russian population from the republic. But, unfortunately, no practical steps are taken to stop this process. At the same time, many have already noticed that the fewer Russians remain in this subject of the Russian Federation, the louder the shots sound not only in the mountains, but also in the cities.

The author of these lines was born in the Dagestan Autonomous Soviet Socialist Republic (DASSR) in 1937. Autonomous, it was under the Constitution of the USSR, and Soviet and socialist - in essence. Traditional Islam, which was especially developed during the time of Imam Shamil, peacefully coexisted here with the Soviet regime. The danger of radical Islamism appeared in 1991, immediately after the collapse of the USSR.

On the basis of Russian fortresses

The first of the peoples of Dagestan in the XVII century in the structure of Russia were Kumyks. Three attempts to join the Persian city of Derbent (in 1722, 1775 and 1786) in Russia were not successful. Only in 1806-m, following the order of Emperor Alexander I, did General Grigory Glazenap seize the city, and from that day Derbent became part of the Russian Empire. 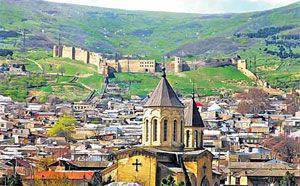 Dagestan, for another seven years, remained an Iranian province. After the brilliant victories in 1812 – 1813 of the Russian army, led by General Peter Kotlyarevsky over the Persian troops, the Gulistan peace treaty was signed, according to which a number of Caucasian territories withdrew from Iran to the Russian Empire, including Dagestan. Soon Russian fortresses appeared here: Sudden, Stormy, Holy Cross, as well as in the villages of Akhty, Khunzakh, Botlikh, etc.

Derbent gubernia was formed in 1846, which became part of the Dagestan region in 1860, after the conquest of Imam Shamil.

Petrovsk-Port was founded on the basis of Russian fortresses in 1857, and Temir-Khan-Shura was founded in 1866. Together with the Kumyks, Jews, Armenians and Azerbaijanis, the Russians became the core around which the urban population of the region began to form.

Today, the date of entry of Derbent into Russia is forgotten. 19 September 2015 celebrated the 2000 anniversary of the city. Residents say it was a holiday for republican officials. And in their speeches, none of them remembered, thanks to whom and how this Persian city was in the composition of Dagestan and Russia.

The ideological vacuum and religious illiteracy of the population formed after the collapse of the Soviet Union became the breeding ground for the spread of false religions and pseudo-ideologies. The initiators of the collapse of the USSR were unable to foresee that by their actions they clear the way for such a dangerous phenomenon, which soon penetrated not only into the Muslim regions of Russia, but also into its central cities, including Moscow and St. Petersburg.

Through the destroyed borders, a flood of propagandists of radical interpretation of Islam has poured, the success of which was promoted by the decline of the economy, the destruction of the former state ideology, the increase in the number of unemployed, the decline in the standard of living of the majority of the population, the aggravation of interethnic relations, etc.

The ethnopolitical processes that arose in Dagestan in connection with this affected primarily the Russian population, whose outflow from the republic from 1991 increased sharply. Of course, the main factor in their outcome was the events in neighboring Chechnya and the weakness of local and federal authorities, who could not protect the civilian population from lawlessness and unrest. The Russians who had no related clans turned out to be the most vulnerable and defenseless. Heightened religious extremism also contributed to this process.

The fact that the Russians were not allowed to the distribution of benefits in the 90 and in subsequent years played a certain role in what was happening. And this, despite their main role in creating and strengthening the economy of Dagestan, the development of its culture, science and education.

The representation of Russians in the government and other administrative bodies of the republican government decreased, outpacing the outflow of the population, thereby provoking an acceleration of the process.

The rapid growth in the number of Russians at the beginning of the twentieth century was the result of their active participation in the construction of cities, factories, factories, railways and highways, a seaport, railway stations, power stations, etc. Russian teachers, doctors, engineers, art workers contributed to the development of education, science and culture in the republic. At this time, in multinational Dagestan, Russian is becoming the language of interethnic communication.

On the eve and during the Great Patriotic War, the Russians formed the basis of the administrative apparatus of the republic. Of the Dagestani 58 Heroes of the Soviet Union and seven full men of the Order of Glory, almost half are Russian surnames, including all eight Makhachkala heroes.

It should be recognized that in the last 20 years the indifference of the federal center to the problems of the republic and, in particular, its Russian population has played a very negative role in what is happening in the republic. This took advantage of ethnic clans, corrupt officials, extremists, terrorists and radical Islamists.

The authorities must finally realize that Dagestan is a unique republic in its composition and its attitude to it must be special. If, for example, two kindred peoples - Chechens and Ingushs - could not live in the same republic, despite the common language and culture, then what is the 36 ethnic group in Dagestan to find a common language. A person who has no clan or clan ties here should lead the republic. The federal center does not understand this. Or understand, but ignore.

Somewhat encouraging is the position of Vladimir Putin, who acknowledged that the exodus of Russians from the North Caucasus means the loss of skilled labor, as well as entire industries, the culture of living together. Also, the President of the Russian Federation voiced the intention of the federal center to ensure the return of people regardless of their nationality.

However, the solution to this problem is extremely difficult. In our opinion, it is necessary to begin with the creation of such conditions in the Tarumovsky and Kizlyar districts under which the Russians will not leave the republic. To this end, in the names of these areas you need to add the word "Russian" or "Cossack", in memory of their affiliation to the Terek Cossacks in the past. This will strengthen the conviction in the consciousness of the Russian population that they are not strangers in the Republic of Dagestan.

Further, in administrative and law enforcement agencies, educational institutions, and other institutions, it is necessary to introduce quotas for places for the Russian population, including for military personnel who are being transferred to the reserve and their family members.

It is impossible to solve the tasks facing Dagestan on a fundamental change in the economic and criminal situation without the Russian population.

Ctrl Enter
Noticed oshЫbku Highlight text and press. Ctrl + Enter
We are
On the ruins of the friendship of nationsMissed chapter "Strategy-2020"
Military Reviewin Yandex News
Military Reviewin Google News
84 comments
Information
Dear reader, to leave comments on the publication, you must to register.