December 1 2015
81
In the light of recent events (Ukraine has ceased to supply electricity to the Crimea), the issue of supplying energy to the Crimea peninsula via an energy bridge is becoming increasingly relevant. Yes, of course, the idea is good, the idea is fast, and besides, it will soon be fully implemented.


But another important question arises: is the unfinished Crimean NPP standing next to you, why not put it into operation? Yes, it's expensive, but when it reaches its full capacity at 4000 MW, the Crimea will be completely energy independent, and even power the mainland of Russia. 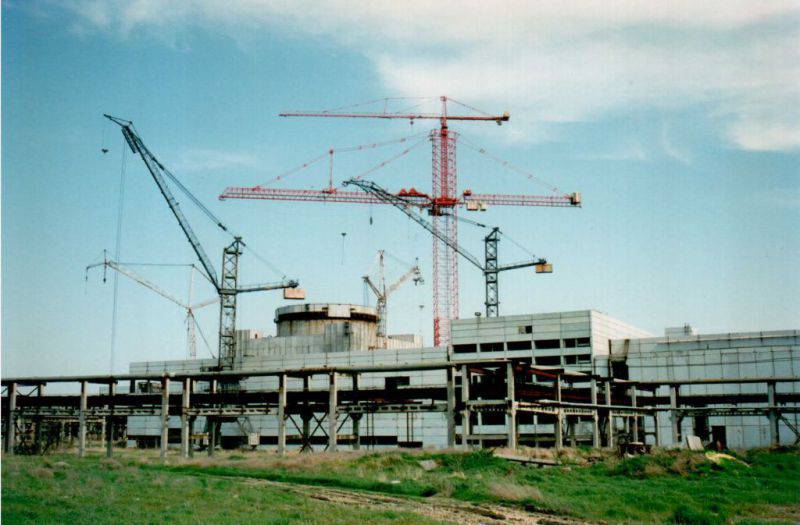 Some of stories: The Crimean NPP is located near the town of Shchelkino in the Crimea on the shore of the salty Aktash reservoir (which was planned to be used as a cooling pond). The design of the plant is of the same type as the existing Balakovo NPP, not brought to the design capacity of the Khmelnitsky NPP, the Rostov NPP and the Temelin NPP. The first design surveys were conducted in 1968 year. Construction started in 1975 year. The station was supposed to provide electricity for the entire Crimean peninsula, as well as create a reserve for the subsequent development of the regional industry - metallurgical, engineering, chemical.

The design capacity of the Crimean NPP 2 GW (2 power unit 1 GW) with the possibility of further capacity increase to 4 GW: a typical project provides for the deployment of power units with WWER-4 / 1000 reactors at the 320 station site.

There was a lot of controversy about the fact that nuclear power is very dangerous. Yes, if it is thoughtlessly managed.

The unfavorable economic situation in the USSR and the catastrophic accident at the fourth power unit of the Chernobyl nuclear power plant 26 on April 1986 led to the fact that by the 1987, construction was first suspended, and in 1989 the final decision was made to refuse to start the station. At this point, 500 million Soviet rubles in 1984 prices were spent on the construction of a nuclear power plant. Materials remained in the warehouses tentatively for 250 million rubles. The station began to slowly take away to the black and non-ferrous scrap metal.

I always ask myself: why is everything that was created in the USSR criticized? Well, for example, the construction of the Crimean nuclear power plant. Now everyone felt that if she were at work now, there would be no talk of any energy blockade. I would only have to create an energy bridge to the mainland of Russia in order to send the surplus there.

Yes, and by the way, then (if the Crimean nuclear power plant were in operation), it would not be necessary to transfer power from the mainland, for example, in order to put a trolleybus from Kerch to Sevastopol, or even for the railway, if it is fully electrified in Crimea.

As for me, this is a very important argument. Moreover, electricity will be enough not only for a sharp increase in the production capacity of the republic, but for strategic transfer to other regions and even for large-scale projects for the desalination of sea water.

The Crimean nuclear power plant, especially in the conditions of constantly attempted by the Ukrainian authorities to economically block the Crimea, would reliably provide Crimea with energy autonomy - then the impetus for the development of industry and tourism in Crimea would be much higher.

During the years of the Soviet Union, those who planned such construction projects as the construction of the Crimean nuclear power plant were no fools. It was evident that people made a great start in the future. But alas, we lost a lot.

Ctrl Enter
Noticed oshЫbku Highlight text and press. Ctrl + Enter
We are
A look from the Crimea on a tripNew plants and workshops in Russia in 2014 year
Military Reviewin Yandex News
Military Reviewin Google News
81 comment
Information
Dear reader, to leave comments on the publication, you must to register.