The economic battle for Syria is just beginning, or the Marshall 2.0 Plan is "in a hurry"

November 27 2015
59
Earlier, the Syrian authorities spread the message that the right to implement the most important infrastructure projects in Syria in the territories liberated from the militants will receive primarily Russian companies. On the eve of this topic, the Minister of Foreign Affairs of the Syrian Arab Republic, Walid Muallem, developed during a meeting with the Deputy Prime Minister of the Russian Government, Dmitry Rogozin. According to the head of the Syrian Foreign Ministry, one of the most important projects in which Russian companies can take part is the development of the oil and gas-bearing Syrian shelf.


Muallem did not specify what specific hydrocarbon reserves in question, stating that "oil and gas fields off the coast of Syria have a huge potential." The news agency reported this with reference to the Syrian minister. TASS. 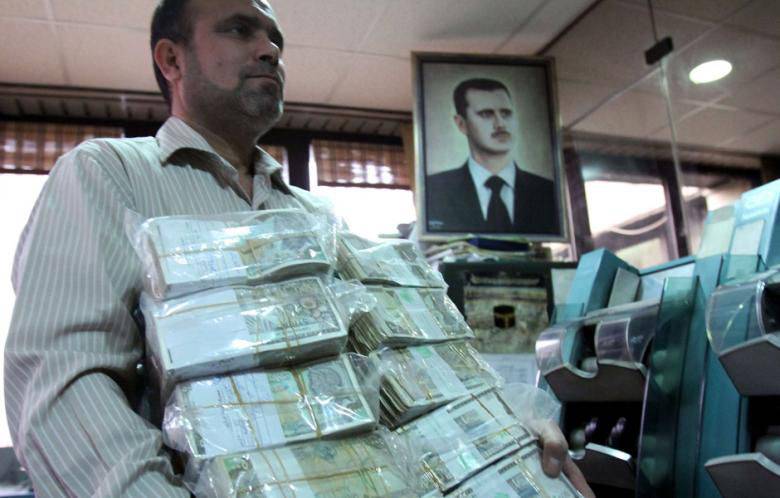 According to Walid Muallem, one Russian company has already entered into agreements with the Syrian side in the oil and gas sector (on the development of the shelf), but the name of this company was not announced.

First of all, we are talking about a large hydrocarbon deposit in the area of ​​the port of Baniyas - approximately in 35 km north of the point of material and technical support of the ships of the Russian Navy in Tartus. The deposit in the Baniyas area is considered to be the largest in the Mediterranean, and, according to some data, companies from Europe, Turkey and the countries of the Arabian Peninsula have long had it.

As Walid Moallem put it:
We hope that not only Russian warships, but also oil-producing platforms will conduct their work off the coast of Syria.
It would seem, what other oil and gas projects can there be when the war is in full swing in Syria? Indeed, it is literally tempting to say that it would be nice to start sweeping away all the terrorist rubbish from Syrian territory, and only then conduct a substantive discussion of business projects. However, as they say among economists, in this case it is necessary to think more “long” and, of course, strategically. If you think differently, then you can encounter, to put it mildly, undesirable results.

History suggests that at one time — when the Red Army continued its offensive, going beyond the borders of the Soviet Union in 1944 — the “allies” were already discussing the process of economic post-war reorganization. As you know, the discussion took place in the American resort town of Bretton Woods, where in fact the beginning of dollar domination and the simultaneous emergence of such quite pocket-friendly structures for the West as the IMF and the International Bank for Reconstruction and Development. And then Mr. Marshall appeared with his plan of "helping" Western Europe, as a result of which Western Europe still could not pay off American banks, being in fact a US-occupied overseas territory with all the consequences for its sovereignty (Sarah Wagenkneht will not lie ...). Mr. Marshall, by the way, deigned to get the Nobel Prize for his plan to colonize Europe.

But history tends to make turns, at certain moments returning to a previously passed point. That is, as long as Russia is carrying on a real counter-terrorism struggle in Syria, our historical “friends, partners and allies” are quite capable of creating a new analogue of Bretton Woods with a new attempt to fix the entire financial and economic system of the world for themselves. In principle, the so-called Trans-Pacific Partnership, which has recently been very actively spoken about, is an example. And the Trans-Pacific Partnership has every chance of acquiring a hypothetical Trans-Indian Ocean and Trans-Arabian partnership, which will allow staking out the unipolar system of the world. After all, we must not forget that in the same TPP there is neither China nor India, but they are referred to as "potentially possible members of the partnership." The main "partner" from whom everyone dances, so decided ...

And the system is not so much a redivision of the world, as the preservation of its unipolar version cannot be realized only if it’s not only from the point of view of antiterrorist interests to look at the very same Syria of Russia today.

And as evidence that some of the “allies” at the SAR are already staring, trying to solve their problems, we can cite the “unexpected” initiative of the Treasury, who would you think ... - Britain. The head of the British Ministry of Finance, George Osborne, speaking in parliament, said that his department was considering the issue of "providing financial assistance to Syria." TASS quotes Osborne:

I can assure you that we could allocate significant sums for the restoration of Syrian cities.

According to some reports, we are talking about the amount of 1 billion pounds.

Strange, but the British Ministry of Finance even the other day stated that he did not have money to stimulate, for example, the EU economy ... And then, you see, there was money, and "for Syria", and a billion at once!

It is of interest that the representatives of Scotland expressed the need to start allocating funds to Syria (in particular, they talked about the restoration of Aleppo) already now, to which Osborne responded as expected:

Let's wait for the development of the situation, because while in the same Aleppo there is a civil war that we are trying to stop.

They are trying to stop ... Well, yes, well, yes ... They also waited during the Second World War, "tried to stop" ... They waited until they realized that the Red Army was a couple of steps away from victory, and that urgent measures should be taken so as not to be far from this very victory.

The system of its own financial domination is trying to promote today. There is an opinion that other “friends of Syria” will try to join the process in the very near future, for whom the very idea that Syria is lost both politically and economically is a great psychological trauma. And this injury "friends" will try to avoid all the forces.

So, Walid Muallem’s proposal (on economic projects and Russia's participation in them) neither by definition nor today can be ignored. Historical lessons are available ...

Ctrl Enter
Noticed oshЫbku Highlight text and press. Ctrl + Enter
We are
The current state of the Syrian Arab Republic air defense systemSyria: Americans scare themselves, and Asma Asad buys chairs
59 comments
Information
Dear reader, to leave comments on the publication, you must to register.