In the article by Oleg Lavrichev, General Director of Arzamas Instrument-Making Plant named after P. I. Plandin, “For whom was the new law written?”, The main shortcomings of the regulatory framework for the activities of defense enterprises were identified. Oleg Koshkur, General Director of Progress Plant of High-Voltage Electronic Components LLC (Ukhta), continues to talk about problems arising from the implementation of federal law No. 275 “On the State Defense Order”.

After reading the law of the first thought arises: on the basis of a concept and ideology, he was written? The declared goals are good, no words - strengthening control, reducing production costs, improving the efficiency of enterprises performing the GOZ. But it will not be about the goal, but about the path leading to it. And the option clearly chosen is not optimal.

I will list the most obvious problems arising in the implementation of the law.

1. Destruction of real cooperation, since in the proposed conditions it is more than likely that some suppliers will fail to work in compliance with the rules introduced. It is impossible to legally force them to comply with the letter of this law; they will simply leave the component suppliers market in order not to work at a loss.

2. The collapse of real production through financial manipulations with special accounts and money for them. For example, the profit is blocked on special accounts until the lead contractor has been executed (1 – 7 and more years). Who will compensate for inflation losses? Where to get funds for the renewal of fixed assets? When the loan rate in the bank is 20 – 23 percent and the allowed profitability of 20 percent (for any enterprises of all forms of ownership, all industries), development is excluded. Interest on the loan can not be higher profitability.

3. Impossibility or extreme difficulty in the implementation of tax, civil and labor legislation. As a result - the corresponding problems of the enterprise. For example, there is a direct ban on the payment of salary advances. It is not clear how to pay it at all with the simultaneous tax assessment of one hundred and seventy employees from five hundred accounts. And how to conduct settlements with suppliers from the same 500 accounts, if small, medium and even large suppliers refused to open special accounts at authorized banks?

4. The multiple increase in the number of accounting, the creation of economic departments, departments of labor and wages and other units to conduct separate accounting of financial and economic activities under contracts. Calculations show that in order to literally fulfill the law, we need to recruit 50 – 60 specialists to the above departments. (Reference: 170 people work at the plant. That is, more than 30 percent of staff will be employed in the non-manufacturing sector?) With an average salary of 35 thousand rubles (with taxes), the payroll per year increases by at least 25 million, and you also need to create jobs, provide them with hardware and software ... It also costs a lot of money. For the uninitiated: all these sums will fall on the cost of production, that is, increase its price. In our particular case - and it is typical for a huge number of enterprises associated with the supply of components, including for the defense industry - it is impossible to recruit highly qualified specialists for this work. In the village where the company is located, there is simply no corresponding personnel base. And how did we work without this 12 years? Who set the standards for the maintenance of special accounts and separate accounting for contracts for large-scale production of general industrial components? 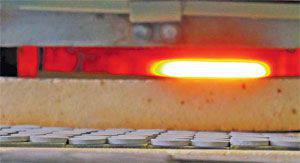 There are no methods adapted for specific enterprises for maintaining separate special accounts of financial and economic activities under contracts, as well as software platforms for automating such counts. And the practice is this: the plant produces more than 250 thousands of accounting units per year, 2500 denominations, 20 recipes, production cycles - from 45 to 120 days, the number of pieces in the order - from 1 to 10 thousands of different types and denominations, and the division of products according to accessories to a specific contract appears only at the end of the technological chain, and technology does not allow separate accounting for operations. For example, even if you do not go into the technological details: it is impossible to load a compound formulation per item in a volume of 250 liters into the mill on 0,1 liters. A specific contract may involve the delivery of exactly one product - and kindly provide it with full bureaucratic support.

5. The multiple increase in administrative costs in connection with the maintenance of hundreds of special accounts in several banks. The nearest bank is in 35 kilometers, while taking into account the lack of an electronic control system and the “client-special account-bank” document system and extremely limited Internet traffic (in Moscow, they may be surprised, but there are still many places in the country optical fiber did not reach and where the Internet may not be for several days).

Assume that all enterprises have found the strength and ability to work strictly in accordance with the letter of the new law, they have no choice. What we get as a result? Collapse or at least a strong deterioration in the economic condition of enterprises associated with the defense industry, and defense companies themselves, as well as the industry as a whole. Disruption of the performance of the state defense order in terms of the actual guaranteed.

In addition, the monopolization of financial flows in five banks and the bureaucratization in conducting operations will most likely lead to a pressure to raise loans for the fulfillment of the state defense order in these banks. In fact, the law predetermines the “nationalization” of enterprises of any form of ownership of the entire cooperative chain. At the same time, monopolies (electric power industry, gas, housing and public utilities, etc.) remained outside the framework of this “nationalization” and do not participate in it. Over 12 years (from 2003 to 2015) we have an increase in electricity tariffs - 496 percent, gas - 547 percent, water - 384 percent, which can be completely interpreted as a state-imposed ban on economic development.

There is also such a thing that is not obvious at first glance as the disclosure of cooperative chains, which makes it easier for foreign “partners” to complicate or block the work of individual enterprises and entire industries. All information on cooperation goes through open communication channels. For example, in the procurement of precision machine tools from a leading global manufacturer, the condition for the delivery of equipment, the seller set the disclosure of information about the cooperation of the buyer. When enterprises operating in the defense industry complex are detected in the chain of cooperation, the transaction is terminated and the equipment is not supplied. The fact that in the specific case of Russian counterparts such machines do not and in the foreseeable future will not appear, no one cares.

275-FZ prohibits the purchase of equipment for money under contracts, arguing that the company should carry out such purchases only from their own funds. That is, from the profit, which, as noted above, is blocked until the parent company fully executes the state contract, or on loan funds at insane interest rates. How to carry out the production program for the production of products without the possibility of operational management of resources - at least for the purpose of buying a new equipment?

275-FZ also blocks the possibility for an enterprise to independently purchase materials, raw materials (in particular, chemical) abroad. In the absence of import substitution for the main types of raw materials used (chemically pure oxides), we are facing a halt in production. In our case, raw materials cannot be acquired exclusively for a specific contract, in grams and kilograms, as required by the new law. Purchases are made in large quantities, in tons, otherwise the cost of supply increases many times over.

And the notorious law puts small and medium-sized enterprises that supply components and materials for the MIC in obviously unequal conditions with public sector enterprises:

-no interest rate compensation on loans;
-no financing of funds for modernization;
-no planned capacity utilization;
- no rhythm of work.

The method of applying 275-FZ is not spelled out, but it is already voiced by military officials. The picture turns out like this. Until a contract is signed and payment is not received for it (for any number of products), the plant must stand, raw materials should not be purchased at the warehouse, external sources (electricity, gas, water, etc.) should be disconnected, people sit at home and wait for the team. As soon as the contract is signed and paid (and under the state contract and without it), the company is obliged to produce products: it is instantly purchased, controlled, tested and imported raw materials, external sources of supply are included (electricity, heat ...), workers are invited and the production cycle begins. And so for each contract - from one to tens of thousands of products.

However, military officials do not answer the questions:

- what kind of production will sustain such a rhythm of work;
- how quickly this production will cease to exist;
- what will be the cost of products;
- how long the product release dates will be in reality with the existing logistics, taking into account the remoteness of the enterprise from industrial, resource and logistics centers, from suppliers of raw materials and how to deal with the supply of special imported raw materials;
- What suppliers will divide the supply of raw materials into grams and kilograms under contracts, if only large-tonnage deliveries are provided?

And if (in most cases this is the case), the cost of the contract does not cover the payroll, tax deductions, or electricity, gas, or water? Do not forget that the breaks between contracts can be from one to three months. What to do with technology, people at this time?

Another example from practice: the high-temperature furnace goes to the + 1 mode degrees per hour, and you need to bring the degrees to + 1500 and the stop after the execution of the contract should go with the same reverse speed. And if the speed is different, then for the second contract you need to build a new furnace (4 – 6 months and 30 million rubles).

I am waiting for someone who can clearly tell how to manage five hundred accounts in a small business. Who will explain why not a word is said about planning orders for at least five years ahead. I would like to know if we will wait for the orders on the construction of domestic plants for the production of chemical raw materials, on the establishment of production facilities for specialized test equipment and measuring equipment.

As a result, I would like laws that will stimulate the development of enterprises, and not complicate their lives. And for this, those who initiate and develop such documents should at least sometimes listen to the people who have to be guided by these laws and apply them in practice.

Ctrl Enter
Noticed oshЫbku Highlight text and press. Ctrl + Enter
We are
List of destroyed the largest and most high-tech enterprisesTo the peculiarities of the modern Russian military-technical policy
Military Reviewin Yandex News
Military Reviewin Google News
101 comment
Information
Dear reader, to leave comments on the publication, you must to register.