November 26 2015
23
The head of the press service of the Eastern Military District of the Russian Federation, Alexander Gordeyev, reports that the selection committee has completed the acceptance of the newest Su-35С fighter, held at the plant in Komsomolsk-on-Amur. It is reported that the multipurpose fighter has already entered service with the aviation regiment of the VBO stationed in the Khabarovsk Territory.


Alexander Gordeev added that the delivery of Su-35С aircraft to the air regiment is going in full accordance with the plans. Reports about it RIA News. The first Su-35 entered service with an aviation regiment at the beginning of 2014. 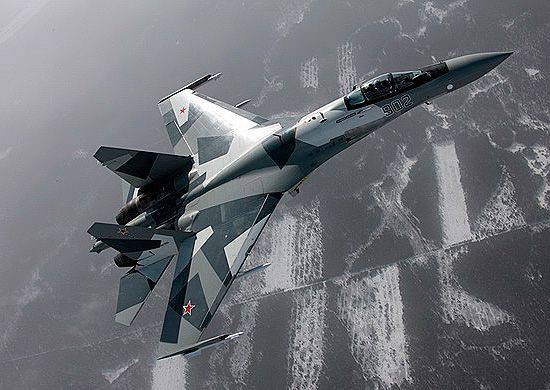 For your information:
Su-35С - deep modernization of the multi-generation fighter "4 ++". Experts point out that in a super-maneuverable aircraft several segments were implemented, corresponding to the 5 generation technology.

The aircraft has an optical-location system capable of detecting and tracking targets for outgoing thermal radiation. It measures the distance to the target and its laser light.

The pilot has a helmet-mounted sighting system, in front of him are two liquid crystal displays and a special indicator on the cockpit glass. The plane has a control system.