The future of the union of Russia and Iran

November 27 2015
138
Vladimir Putin visited Tehran at the summit of the Gas Exporting Countries Forum (GECF). The President of the Russian Federation believes that it is necessary to build more pipelines and increase the supply of liquefied natural gas. Discussion of issues related to the GECF was only the “surface” part of Vladimir Putin’s visit to Tehran. The main event, it is believed, was the meeting of the Russian president with Ali Khamenei, the spiritual leader of the Islamic Republic of Iran. 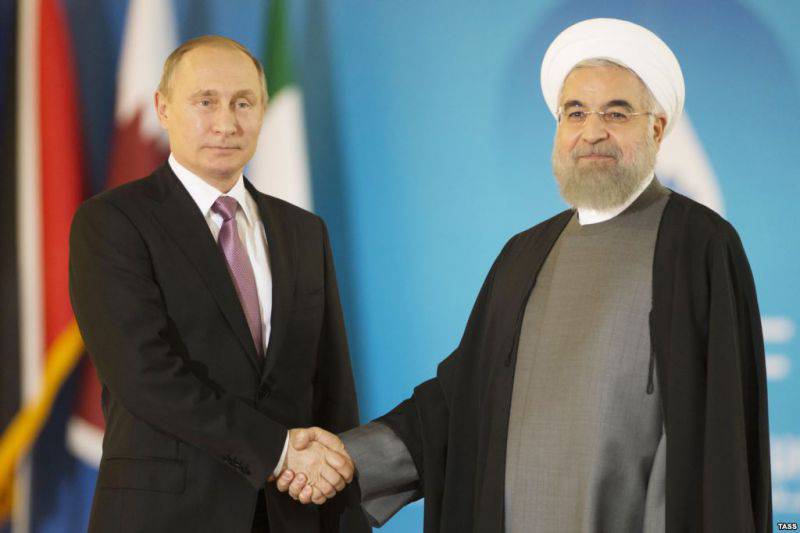 Speaking at the forum, Vladimir Putin supported his motto: “Natural gas is the best fuel of sustainable growth.” "The demand for it in the world is growing at a pace that outpaces the demand for oil and other energy resources," the Russian leader quotes "First channel". - According to forecasts, by the year 2040 global gas demand will increase by 32 percent - almost to 5 trillions of cubic meters. This opens up great opportunities to increase production and export of gas and at the same time presents a serious challenge, because it will be necessary to drastically accelerate the development of new fields, modernize processing facilities, expand the gas transportation infrastructure: put into operation additional pipelines and establish extensive routes for the supply of liquefied natural gas. Such ambitious plans require large-scale investments, the payback period of which will stretch for decades to come. And investors, of course, need clear, strong guarantees. But most importantly, along with gas producers, future consumers should also bear investment risks. Everyone has to pay for energy security. ”

Many analysts, both Russian and Western, consider “the highlight of the program” not Putin’s participation in the forum, but a meeting on the summit’s summit with Ayatollah Ali Khamenei. It is not for nothing that the visit of the Russian president to Iran began precisely with a meeting with the Ayatollah.

However, journalists in Iran are not honored. Vladimir Putin met with the spiritual leader of Iran without a press. There are no details about the meeting of the spiritual leader of Iran and V. V. Putin. There is only what was officially reported: they say, the conversation was about bilateral economic and political relations between Tehran and Moscow. In addition, Ayatollah and Putin exchanged views on Iran’s nuclear file and on the future of Syria.

A little more said the press secretary of the head of the Russian state, Dmitry Peskov.

“The conversation with Iran’s Supreme Leader Ali Khamenei lasted longer than planned, over one and a half hours. The conversation was very constructive, "- quotes the words of Peskov newspaper "Sight".

“To a large extent, the discussion focused on crisis situations in the general region, and the situation in Syria was primarily discussed. A very detailed exchange of views took place, the unity of views of Moscow and Tehran on the inadmissibility of dictating the options for a political settlement from the outside and the lack of alternative to the implementation of this political method by the Syrian people was emphasized, ”said Peskov.

In addition, the leaders "exchanged views on the current state of bilateral relations, including in the sphere of trade and economic cooperation, noting that there are a large number of specific projects in the energy sector and other areas on the agenda."

“From the plenary meeting of the gas summit, in contrast to the meeting between Putin and Khamenei, they did not deliberately make secrets. They did it easier - they did not provide the event with translators. Journalists watched the events from the press center. If someone did not understand Farsi or Spanish, these were his personal problems. Translation into Russian was also absent. The promised broadcast on Russian TV channels did not take place.

“No broadcast?” Putin was surprised. He had already read out his speech at the meeting, but was silent, noting the active gestures of his colleagues. They tapped on the headphones, showing that they could not hear the translation. Putin paused. At this time in the hall made a chair. Obviously for the interpreter, who never appeared. Upon reflection, the chair carried out. And Putin continued ... "

Putin’s visit to Iran in the Western media, indicates Melikyan, was accompanied by assumptions about certain actions of the White House: they say, the Obama administration, together with European and Arab allies, is driving a wedge into the alliance between Russia and Iran. And all because of Assad. Moscow “carefully states,” the observer writes that the Syrian people should decide the question of Asad’s resignation, and Iran speaks of the undesirability of a change of power in Damascus. President Rouhani is confident that this will turn Syria into a "paradise for terrorists."

As for gas, I told about it in Gazeta.ru Member of the Expert Council of the Union of Oil and Gas Industrialists of Russia Eldar Kasaev.

Despite Putin’s appeal to gas suppliers to share risks with manufacturers, the expert notes, this controversial issue at the Teheran meeting remained unresolved.

“The main task of the exporter is to fulfill his obligations in good faith, the importer is to receive the necessary amount of raw materials on time. The situation with Russian gas going through Ukraine to Europe, multiplied by the acute reluctance of the European Union to allow Gazprom to supply fuel through other highways, can be a vivid demonstration of the absence of consensus between the seller and the buyer. And this is despite the fact that Gazprom has signed contracts for the supply of raw materials with the EU states up to 2035, and the transit agreement with Ukraine expires at the end of 2019 of the year. ”

Nevertheless, the participation of the Russian president in the summit cannot be considered a waste of time. The expert indicates that Putin managed to find out the positions of the main players on gas issues.

Nevertheless, the declaration signed at the end of the forum is unlikely to ensure the security of supply and demand in the gas market, not to mention the intensification of investment flows into the industry, as Putin called for. “For almost 2,5 of the year since the previous summit (held in July of 2013 in Moscow) political contradictions between the key participants of the GECF - Russia, Qatar, Iran - have become even more,” reminds Kasaev.

As for the policy of Russia and Iran in the Middle East, Stanislav Tarasov, director of the Middle East - Caucasus Research Center of the International Institute of the Newest States, spoke out on this topic.

“Moscow is also interested in cooperation with Tehran becoming sustainable,” he said. "Free Press". “Now Iran is emerging from international isolation, and after a while it is likely to become a leading player in the Middle East, who can even compete with Saudi Arabia.” This further increases Tehran’s geopolitical weight as an ally. ”

In addition, one more circumstance is playing into the hands of Moscow: the US has shifted the focus of foreign policy from the Middle East to Southeast Asia. According to experts, the Americans do not interfere with the rapprochement of Russia with Iran.

“In the future, it is Iran and Russia that will be active participants in the process of reformatting the Middle East,” the expert is convinced. - While both countries are talking about the need to preserve the territorial integrity of Syria. But if this fails, Iran and Russia will take a direct part in the redistribution of the Middle Eastern world. ”

We should not forget that Iran is an outpost against the "IG" on the southern borders of the Russian Federation. In Transcaucasia, Russia has no allies except Armenia. Cooperation with Azerbaijan and Georgia is limited only to economic partnership. Finally, Iran, the interlocutor of the “SP” believes, is important for Russia “in terms of influencing the processes in Afghanistan.”

In conclusion, it is necessary to say about the future of economic cooperation between Iran and Russia, which so far looks rather vague.

During Vladimir Putin’s visit to Tehran, Russia’s provision of a state loan to Iran (in the amount of 5 billion dollars) was discussed. The parties signed a draft document. Reported it RIA News" First Deputy Prime Minister Igor Shuvalov.

“While the document regarding the loan itself has not been signed, but the project has been signed,” he added. According to him, the funds will go to the electrification of railways and the construction of thermal power plants in Iran.

Earlier, Iran’s First Deputy Minister of Industry, Mines and Trade, Mojtaba Khosroutaj, reported that Iran had agreed with Russia on the basic conditions for granting Moscow a loan in 7-8 billion dollars for projects implemented by Russian companies.

Observed and commented on Oleg Chuvakin
- especially for topwar.ru
Ctrl Enter
Noticed oshЫbku Highlight text and press. Ctrl + Enter
We are
Results of the week. “Unlike everyone else, I went to the army for spiritual reasons.”Vladimir Putin: the question of the “American miracle” is not yet relevant for us
Military Reviewin Yandex News
Military Reviewin Google News
138 comments
Information
Dear reader, to leave comments on the publication, you must sign in.