November 25 2015
160
History with the attack on the Su-24 is indicative in all respects. The point is not even that the Ministry of Defense of the Russian Federation stated that Su-24 did not violate the airspace of Turkey, and in this case it can be trusted. How can you believe in the fact that the Turks invaded Syria to attack Russian aircraft. According to Ankara, the attack was made when the Su-24 crossed a small border protrusion a little more than three kilometers wide. You do not need to be an expert in the field of air defense (and the author of the text, although a little, but served in the air defense), to understand that Turkey could not raise the duty link immediately, at the time of the border violation. Consequently, our pilots were waiting in advance. By the way, for the same reason, there can be no talk of any 10 warnings that the Turks allegedly transmitted to the Su-24 crew. During the time during which the Russian aircraft crossed the "protrusion", one could not really pronounce one warning. The speed with which the video from the scene hit the Turkish TV channels is also striking. 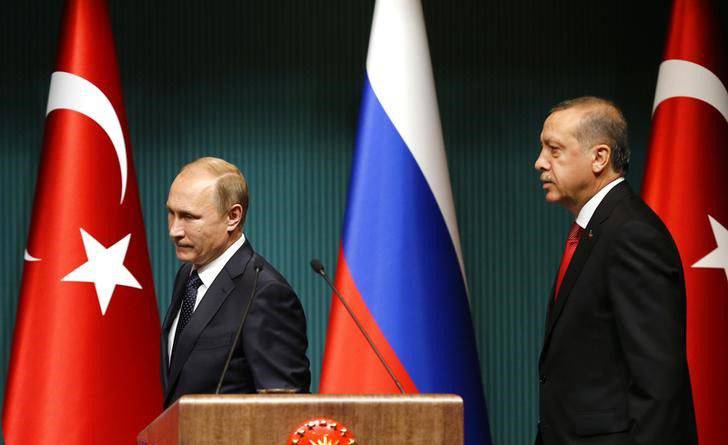 So, we definitely have a provocation. Provocation focused and well thought out. It is necessary to clearly understand the rules of the game. If now you don’t answer with the utmost harshness, then tomorrow the Russian military plane will bring, for example, Sweden. And everyone will declare the protection of their territory if they know that the Russians are lowering it. The official position of Moscow will look unattractive in the eyes of not only the world community, but also its own citizens - you can't even say which is more dangerous from this.

The rupture of diplomatic relations with Turkey. Confiscation of all Turkish assets, public and private in the territory of the Russian Federation. All Kurdish rebel movements are immediately recognized as national liberation, and Turkish Kurdistan is an occupied territory. Of course, all joint projects are frozen indefinitely. This is the minimum of what the leadership of the Russian Federation should do if it wants to continue to be considered legitimate.

It provides for all the above measures, plus some more, mainly of a forceful nature. In particular, the destruction of one or more military aircraft in Turkey or a warship or the attack of a crowd of unknown "furious citizens" at the Turkish embassy in Moscow. The strike on the Turkish air base "Caliber" also does not look like a disproportionate response. But the blow should be delivered right now, and not in a month or in half a year. By the way, if necessary, the Black Sea Fleet can be strengthened by ships of the Caspian flotillathat will freely pass along the Volga-Don canal.

Other suitable targets are the naval bases of the Turkish Navy on the Black Sea, Sinop and Samsun, where, with a strong desire, you can arrange a local reconstruction of Pearl Harbor.

The evacuation of all diplomatic personnel and all Russian citizens from Turkey in general, who will agree to leave this country and the final decision by the Strategic Nuclear Forces of the Russian Federation, the Turkish issue, after which the army of Greece, Armenia and the Kurds will finish the job.

Help NATO say? And who, in fact, will have to be helped by NATO if Turkey disappears as a state and nation in radioactive fire? Disappear, not having time to ask for help, and if he has time, then what a madman will dare to help her in this situation?

Proponents of the hard line in the Kremlin while clearly not in the majority. So, the Kiev authorities, who committed the genocide of the Russian-speaking population in the Donbas and bombarded the Rostov region, suddenly became “partners” worthy of comprehensive economic support. Qatar, which, according to experts in the Middle East, is behind the A-321 terrorist attack, instead of being hit by Caliber missiles, received ... information about the actions of the Russian Federation against the IG, which was transferred by Moscow to the antiterrorist center of the American coalition in the emirate. There is a good chance that it will be the same with Turkey. "Partnerships" are increasingly bizarre in our foreign policy.

24 November, President Putin called Turkey an accomplice of terrorists. These are the right words. There is a very fragile hope that concrete military actions will finally follow. For the alternative is known.

Instead of an afterword. The only real military response that Moscow has undertaken on the evening of November 24: the Moscow cruiser with the C-300 naval version of the Fort (target destruction range to 200 km) will now act as a floating air defense battery. In addition, the Russian base in Syria has its own air defense system, including C-400 complexes. The fighter group, according to open data, consists of 4 Su-30CM and 4 Su-27CM. It is intended to destroy any air targets that pose a threat.

Ctrl Enter
Noticed oshЫbku Highlight text and press. Ctrl + Enter
We are
Turkey and Greece. Cold War airspaceSituational analysis of the death of the MH17 flight (Malaysian Boeing 777), made on the basis of engineering analysis from 15.08.2014
Military Reviewin Yandex News
Military Reviewin Google News
160 comments
Information
Dear reader, to leave comments on the publication, you must to register.