November 23 2015
23
Last Friday, President of Ukraine Petro Poroshenko met in the Vatican with the high priest of the Roman Catholic Church - Pope Francis. The coming weekend prevented Kiev propagandists from commenting on this event and telling the country how “the Pope prays for Ukraine and blesses Petro Poroshenko”. Poroshenko himself had to give an assessment of the meeting with the pontiff on his Facebook page. According to the Ukrainian president, its main episode was a request to the Pope for the beatification of Andrei Sheptytsky and Stepan Chmil. 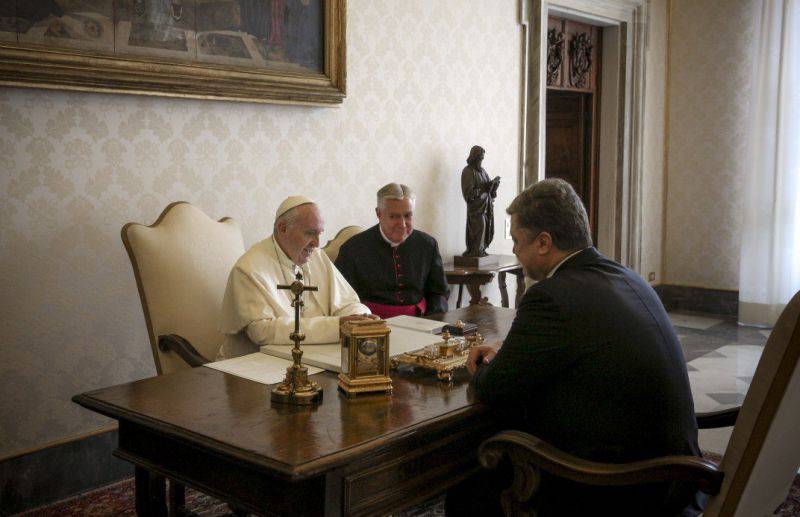 The life of Stepan Chmil, a religious leader of the Ukrainian Greek Catholic Church, is little known in Kiev. It was mainly held in Europe, where, at the age of thirty, Chmil finally moved after the Second World War. He was remembered to the people dedicated to him by the fact that in the sixties of the last century he was the rector of the Ukrainian Pontifical Minor Seminary in Rome. Moreover, the name of the educational institution “Papal” appeared at the time when the seminary was headed by Stepan Chmil. It is produced by the efforts of the rector. Bishop Stepan Chmil died in the late seventies. Buried in the Basilica of sv. Sofia in Rome.

In Ukraine, Chmila was recalled recently when Pope Francis became the sovereign of the Holy See. In his youth, the current pontiff was a student of the Ukrainian bishop and even served him during church mass, regular worship, classes in a theological school, where Bishop Chmil taught, and simply in everyday life. It was through the memory of this man that Petro Poroshenko came to the Pope with his main request — about the beatification of Metropolitan Andriy Sheptytsky.

This rarely used term should be clarified. In the Roman Catholic Church, beatification is the rite of canonization. It seems like the canonization of the saints of the Orthodox. And the requirements are also similar: compliance with religious orthodoxy, the presence of outstanding manifested virtues, and most importantly - the candidate for the face must perform a miracle in life, or it will arise after a person’s death, through the prayer addressed to him. The last requirement is that the church often neglects when it comes to individuals secular or opportunistic political reasons, as was the case, for example, with the Orthodox during the construction of the Russian Emperor Nicholas II in the face of the saints.

With Metropolitan Andrey Sheptytsky other история. The hierarchs of the Roman church still in the 1950-x and 1960-s tried to beatify him, but both times, against the wall, the Primate of Poland arrested Archbishop Stanislav Vyshinsky. In Poland, to Metropolitan Sheptytsky quite a definite attitude. The Poles directly associate his name with the activities of the Ukrainian nationalists and the massacre that they staged in the spring of 1943 in Volyn, killing more than 50 000 people. Not even children, women, old people were spared.

Today Petro Poroshenko on the shoulders of Bishop Stepan Chmilya wants to raise Metropolitan Sheptytsky to holy heavens. Why does this need the Ukrainian president? It seems that this is how he understands the identity of the nation.

Metropolitan Andrey (in the world - Count Roman Maria Alexander Sheptytsky) in the Ukrainian Greek Catholic Church is a significant figure. He headed its 44 of the year (from 1900 to 1944). A representative of a rich, noble family, Sheptytsky first received a legal education in Wroclaw, became a doctor of law. Later he became interested in the ideas of the Ukrainian nationalist movement, abruptly changed his life and made a career in the Greek Catholic Church.

This local church originated in times of Russian turmoil. Then the Ukrainian nobility tried to dissociate itself from the Moscow problems and unite with the Polish gentry. An obstacle to the plan was the Orthodox faith. However, to turn the villagers into good Catholics did not work. The resistance of the believers was serious. It was possible only to supplement the Byzantine rites with Catholic dogmas and to bow before the Roman Church, having received its patronage and favor. The union (union), concluded with the Roman See, will give the new church another colloquial name - Uniate.

Since then, Greek Catholics have existed as a separate branch of faith in the western part of the Ukrainian land. She went from Poland to Austria-Hungary and back. Visited the Russian Empire. Before the war became part of the Soviet Union.

Today in Ukraine they write a lot about the fact that this time was a personal tragedy for Metropolitan Andrey. In 1939, in the family estate Sheptytsky in Prilbichi enkavedeshniki shot his brother Leo, along with the whole family. This case justifies the cooperation of Andrei Sheptytsky with the Nazis. True, at first such cooperation was denied altogether. But conscientious historians raised a congratulatory letter to Hitler, in which Sheptitsky welcomed the Fuhrer who took Kiev as "the invincible commander of an incomparable and glorious German army."

Then the Metropolitan Galitsky and at all offered his cooperation to the Nazis. Helped them to export Ukrainian youth to forced labor in Germany. Here are the lines from his address to the congregation: “Staying in a foreign land will in some way bring you benefit and advantage. Learn a foreign language, learn the world and people, gain life experience, get a lot of knowledge that can be useful to you in life. ”

For people who are inclined to see Russian propaganda in historical documents, I’ll give testimony from a former employee of the Abwehr, Alfons Paulus, whom he gave at the Nuremberg Trials: “In training camps of the Governor-General, the priests of the Ukrainian Uniate Church, who participated in the performance of our tasks along with other Ukrainians ... Arriving in Lviv with the 202-B team (subgroup II), Lieutenant Colonel Aikern established contact with the metropolitan of the Ukrainian Uniate Church. Metropolitan Sheptytsky, as Ikern informed me, was pro-German, put his house at Eikern's disposal ... The whole team was supplied from the reserves of the monastery. He dined at the metropolitan, as usual, with Aikern and his closest associates. Later, Eikern, as the head of the team and the head of the OST department, ordered all the units subordinate to him to establish contact with the church and maintain it.

Such is the locum tenens of Ukrainian Greek Catholics, whom President Poroshenko sees today only as among the blessed (those who see God in heaven) of the Roman Church. True, there are other motives. Already at the beginning of the war, A. Sheptytsky met with the head of the OUN (Organization of Ukrainian Nationalists) S. Bandera and, as head of the church, blessed his army to fight the Bolsheviks. For today's Ukrainian authorities, this action is sacred. For the Poles, confirmation of Sheptytsky’s involvement in the nationalist movement and the Volyn tragedy.

Metropolitan of Galicia Sheptytsky died on November 1. 1944, in Lviv, was buried there. Two years later, the Soviet government liquidated the Ukrainian Greek Catholic Church. The event will give some legitimacy. In March 1946, the USSR authorities will hold the so-called Lviv Council, which will abolish the UGCC, and priests and parishes will be reunited with the Russian Orthodox Church.

Disagreeing with this, the Greek Catholics will unite in the catacomb church. It legalized in February 1990, after meeting in the Vatican the President of the USSR Mikhail Gorbachev and Pope John Paul II. Gorbachev will lift the ban on the creation of Greek Catholic communities, allow their registration and worship. Most of the churches in Western Ukraine, which passed to the Moscow Patriarchate in 1946, will be returned to the UGCC. The process will be difficult, right up to the melee between the communities of believers. With the support of the authorities, the Greek Catholics will return to their church a dominant position in the West of Ukraine.

A new breakthrough will be received by the UGCC during the presidency of Viktor Yushchenko. At the end of August, the 2005-th residence of the head of the UGCC will be transferred from Lviv to Kiev, and Pope Benedict XVI will assign the new Catholic title to the first hierarch of Greek Catholics - His Beatitude Supreme Archbishop Kiev-Galitsky (previously called His Beatitude Supreme Archbishop Lviv).

Donetsk, Crimean, Odessa, Kharkiv Exarchates will appear in Orthodox Ukraine, and the number of parishes of the UGCC will approach four thousand and almost equal to the districts (4231) of the divisive Ukrainian Orthodox Church of the Kiev Patriarchate, also actively supported by the authorities. Together, they have not yet defeated the Ukrainian Orthodox Church of the Moscow Patriarchate - with its ancient Kiev-Pechersk Lavra, 175 monasteries, 10 higher religious educational institutions and 11 000 parishes.

However, these data of the State Committee of Ukraine for Nationalities and Religions refer to the pre-found period. Then, as we remember, there were murders of priests, expulsions of believers from temples. That cleared the Ukrainian nationalists, rushing after their exarchs to the Orthodox lands. Today they rule the ball in the corridors of the current Kiev authorities. With them, President Poroshenko binds the Ukrainians' self-identification, and therefore he is busy in front of the Pope of Rome about the new status of Metropolitan Sheptytsky who is charismatic for the nationalists.

Where the mindless support of the nationalists leads

These efforts Petro Poroshenko is not harmless. The heroization of Stepan Bandera under Viktor Yushchenko has already brought Ukraine its bitter fruits. The beatification of the Bandera's spiritual mentor will be a new occasion for religious disengagement and the next showdown because of the temples, parishes, the influence on the minds and souls of believers.

The impact of the Bandera nationalists on the Kiev authorities has already passed all bounds. For example, shortly before Poroshenko’s visit to the Vatican, Ukraine did not support a UN resolution against the glorification of Nazism. A country that has lost millions of citizens from Hitler’s invasion, for the second year in a row opposes those who see the glorification of Nazism as a danger to the world and humanity.

In Ukraine, this danger has already become a reality. It's not just about the war in the east of the country. Here, the nationalists are largely out of control of the government. Last Saturday, for example, representatives of the Crimean Tatars and the nationalist party Right Sector, which was banned in Russia, blew out pylons of power lines going to Crimea. After that, they did not give the repairmen a chance to restore power supply and staged a scuffle with the security forces, who arrived to restore order, even wounded their commander, the colonel, with a knife.

The brightest episode of disregard for laws and power occurred recently in the Sumy town of Konotop. Here, following the election of 25 in October, Artem Semenikhin, a member of the Nazi Freedom party, became mayor. The former psychologist officer of the 92-th separate mechanized brigade of the Armed Forces of Ukraine began his civil service by throwing from his office a portrait of the president of Ukraine, Petro Poroshenko. The Greek Catholic confessor has consecrated the mayor’s office space, as after an evil spirits. Then a portrait of Stepan Bandera, the “conductor of the Ukrainian nation”, was hoisted onto the wall. According to the Ukrainian media, other parish mayor's example followed the example of Semenikhin, who came to power from nationalist parties.

... So, the desire of the Ukrainian president (who calls himself Orthodox) to raise the icon of nationalists to the heavens, Metropolitan Sheptytsky, will not bring Poroshenko either glory, or honor, or benefit. But it can give the local Nazis a spiritual base recognized by the world Christian church, and Ukraine - new misfortunes instead of the expected world ...

Ctrl Enter
Noticed oshЫbku Highlight text and press. Ctrl + Enter
We are
Soldiers of the Holy See: the army of the PopeKiev at the state level is going to celebrate the anniversary of the Nazi accomplice
Military Reviewin Yandex News
Military Reviewin Google News
23 comments
Information
Dear reader, to leave comments on the publication, you must sign in.